Ahlam Al-Jabouri did fearless humanitarian work under the U.S. Army in Iraq -- but when her life was torn apart by sectarian hatred, U.S. authorities were MIA. 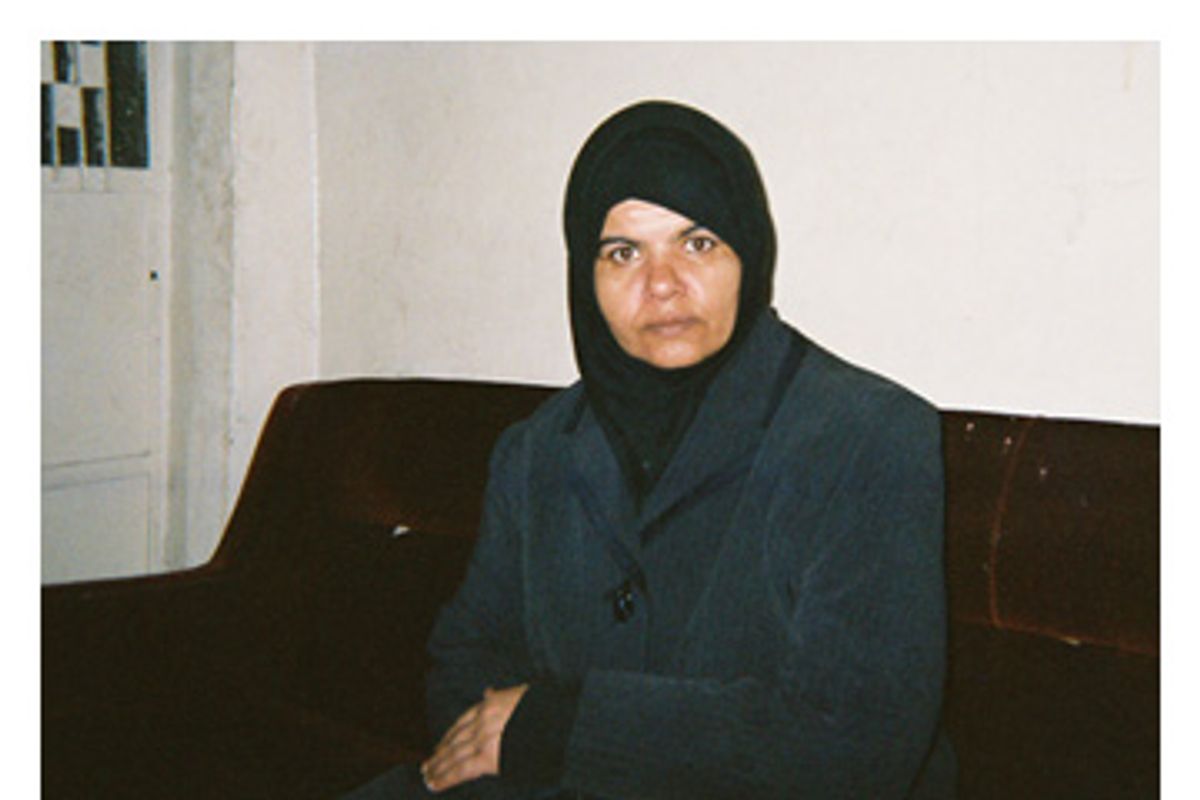 The tragic abandonment of many Iraqi translators, drivers and security guards working for the U.S. war effort has been widely documented for some time now. Human rights groups and some American politicians are urging the Bush administration to do more to protect and shelter Iraqis who face deadly reprisal. But Iraqis on the front lines of the war are not the only ones whose lives have been shattered after working under U.S. authorities to help rebuild their country.

Ahlam Ahmed Mahmoud al Al-Jabouri, a 42-year-old mother of three, belongs to another category of imperiled citizens-turned-refugees whom no one seems to care about. She is among thousands of Iraqis who have worked in seemingly less exposed positions for the U.S. and Iraqi authorities, carrying out administrative tasks, rendering basic services or, as in Ahlam's case, doling out crucial humanitarian aid to the people of her country. But even delivering help to the poor, the handicapped and the displaced did not spare Ahlam from being labeled a traitor by some of her fellow Sunnis. In the past two years, Ahlam has been kidnapped and tortured, was forced to flee Iraq, and lost one of her teenage sons under dubious circumstances. Although she was officially recognized for her exemplary humanitarian work by the U.S. Army more than two years ago, U.S. authorities have done little to help her, and her struggle to find safe haven continues today.

Ahlam's ordeal casts light on the depth of the resentment among Iraqis in general, and Sunnis in particular, over the U.S. invasion of Iraq and the resulting sectarian conflict that has engulfed their country in the past two years. The fact that a respected aid worker like Ahlam has faced brutal reprisal speaks volumes about the fractured state of Iraqi society.

Nowadays, Ahlam lives with her family in a drab three-story building off "Iraqi Street," the new name of the main thoroughfare of Said Azainab, a destitute neighborhood of Damascus overflowing with tens of thousands of Iraqi refugees. This capital city has lured the vast majority of the more than 1.2 million Iraqis who have fled to Syria. An additional estimated 1 million Iraqis eke out a living in neighboring countries, mostly in Jordan, while 2 million Iraqis are displaced within their own country. The Iraq war has caused the most significant population displacement in the region since the Arab-Israeli conflict of 1948, according to the United Nations.

On a recent spring day, Ahlam saw her son and her daughter off to school, kissing them goodbye and hurrying them through the door of their small flat. Wearing a dark gray overcoat over a traditional black head scarf, she then settled on a couch and began telling her story in a calm voice and neutral tone. But as she delved into her recent past, recounting her daily struggles and pondering an uncertain future, her voice began to trail off, her pitch-brown eyes welling up, her hands nervously twisting her handkerchief.

Before fleeing to Syria two years ago, Ahlam worked for the Al-Khadimiya General Information Center in Baghdad, one of several civil-military structures set up by the U.S. Army to assist Iraqis shortly after the March 2003 invasion. She was in charge of overseeing assistance to rural areas near Baghdad, especially the provision of medical treatment to orphans and financial compensation to civilians caused harm by the U.S. military. She soon began receiving anonymous threats. In December 2003, she found a flier claiming she was an American spy. Fearing for her family's safety, she decided to move to Syria in February 2004. But after two of her brothers still in Iraq convinced her that her exile had tarnished the reputation of their Sunni tribe, the Al Jabouri, she left her immediate family members in Syria and returned to Iraq to resume doing relief work.

By then, sectarian violence was becoming a fixture of daily life in Iraq -- and as a Sunni tending to mostly Shiite areas, Ahlam's courage and dedication were highly valued by locals and U.S. authorities alike. In a letter of commendation from April 20, 2005, Daniel J. Barzyk, a U.S. civil military officer under whose supervision Ahlam worked in Baghdad, praised her "impeccable" interpersonal skills and her "outstanding" attention to detail. He wrote that she has "repeatedly shown her concern for the people of Khadimiya and all of Baghdad by requesting additional support for the poor and the disadvantaged. She truly desires to help others with no intent to advantage for herself." Barzyk recommended that she be nominated an "Ambassador for Hope" and travel to the United States to draw attention to the mounting humanitarian needs of the Khadimiya area.

But Ahlam didn't go to the United States, and her family became more deeply entangled in the unending cycle of Iraqi tit-for-tat violence.

On July 3, 2005, still recovering from recent surgery she'd had, Ahlam was leaving her home for work when several cars pulled in front of her. The assailants grabbed her, yanked her into the trunk of a vehicle and drove for several hours before locking her in a room, where she was blindfolded and tied to a chair. They kept her there for five days, Ahlam said, during which time she was beaten and interrogated about the location of American troops, translators and contractors working for the United States.

"They told me they were after me because of what I was doing and warned that they would kill me," she said, adding that she suspected her assailants were likely linked to al-Qaida based on their clothing, their foreign accents, and what her family told her after she was released.

Shortly after she was abducted, Ahlam's husband and her brothers had managed to establish contact with her captors through an intermediary. While her captors initially demanded $150,000 for her release, the ransom was eventually lowered to $50,000 on the condition that Ahlam leave Iraq. Six days after being grabbed off the street, she was dropped by a car in front of her home. She suffered a mild heart attack the next day.

When Ahlam reached out to the American-led authorities, the only response she got was another letter from the U.S. Army. Dated Aug. 23, 2005 and signed by U.S. Maj. Adam Shilling, it explains that the physical abuse Ahlam had endured during her weeklong abduction resulted in several long-term injuries. Shilling added that due to the ongoing threats Ahlam, her family and her co-workers faced, she could no longer work and was planning to leave the country again. The letter concluded with a general plea: "Please render whatever assistance you can to her and her family," it said.

"The U.S. Army just supported me with this letter, that's all," Ahlam told me with no discernible anger in her voice, but with a fatalistic smile on her face. "They tried to help but they couldn't do much. So I depended on myself, my family and my friends."

She fled with her family in early September 2005 to Jordan, then moved to Egypt and eventually settled in Damascus again in late 2005. There, a new tragedy was about to unfold. Soon after their arrival, her 12-year-old son, Anas, began suffering from back pains. His health quickly deteriorated and doctors found out he suffered from internal bleeding. It was too late to save him and he passed away five months later. The autopsy report she showed me, which was read to me by a translator, mentions that "external blows" were the likely cause of her son's internal bleeding, but offers no explanation as to their nature. Ahlam does not know whether her son was the victim of random violence or a sectarian vendetta.

The influx of Iraqi refugees struggling to find work, feed their families, and send their children to school has led to a rise in criminal activity in Damascus. But the violence may also be much-feared spillover of sectarian tensions and vengeance killings into Syria from Iraq. Earlier this year, another Iraqi refugee tried to abduct Ahlam's other teenage son, Abdullah, on "Iraqi Street," but he managed to escape by shouting for help. The assailant was later arrested by Syrian security forces, Ahlam said.

"I hate the word 'Sunni' or 'Shia.' I lived among Shia for 20 years and there is no difference between us," she said. Like most Sunnis, she blames Shiite militias for instigating most of the sectarian violence in Iraq, and the government of Prime Minister Nuri al-Maliki for failing to rein them in.

"All this makes staying here hard," Ahlam said. "There is no work, the rents are high, and we don't feel safe."

The family currently relies on some food distribution by the United Nations and the small income her husband is able to make from selling Sony PlayStations. Ahlam is not able to work because her heart condition has worsened. Her three brothers still live in Iraq, unemployed and the target of regular threats. They visit her from time to time and are now considering moving to Syria.

"I have no regret doing my work. Iraqis need all the help they can get, and I was proud of what I did for the people in those rural areas," she explained. But she does not envision returning. "I have nothing left. I can't have a normal life there," she said, adding that, like the vast majority of recently exiled Iraqis, she has applied for refugee status with the U.N. High Commission for Refugees. (Syria and Jordan do not consider the Iraqis "refugees," but rather "guests.") After several interviews and long delays, she gained some new hope, after the agency referred her to the State Department for resettlement in the United States.

But there are no guarantees for the outcome. According to the State Department, there are currently 5,000 Iraqis being processed for potential resettlement. Ahlam is now supposed to be interviewed by officials from the U.S. Department of Homeland Security, who are to verify her story, conduct a security background check, and make a decision about her status. It could take months.

Spokespersons for both the State Department and the U.N. High Commissioner for Refugees declined to comment on Ahlam's case, saying they do not comment on specific cases due to privacy and security concerns. As of June 7, 63 Iraqis have been granted final approval for resettlement; the first ones are scheduled to arrive on U.S. soil at the end of June, according to the State Department. But Ahlam will not be among them, and the group does not include any Iraqi currently living in Syria, according to Laurens Jolles, a UNHCR representative in Damascus.

"I don't care about myself. I just want a better future for my children," Ahlam said, clutching her younger son's autopsy report in her hands. "I have nothing left, and life here becomes harder [each day] for me and my family. For us, waiting one day is like waiting one year."

Marc Perelman is a diplomatic correspondent for The Forward.