Conversations: Flight of the Conchords

The New Zealand duo behind a hilarious new HBO show get serious about comedy in this interview and podcast. 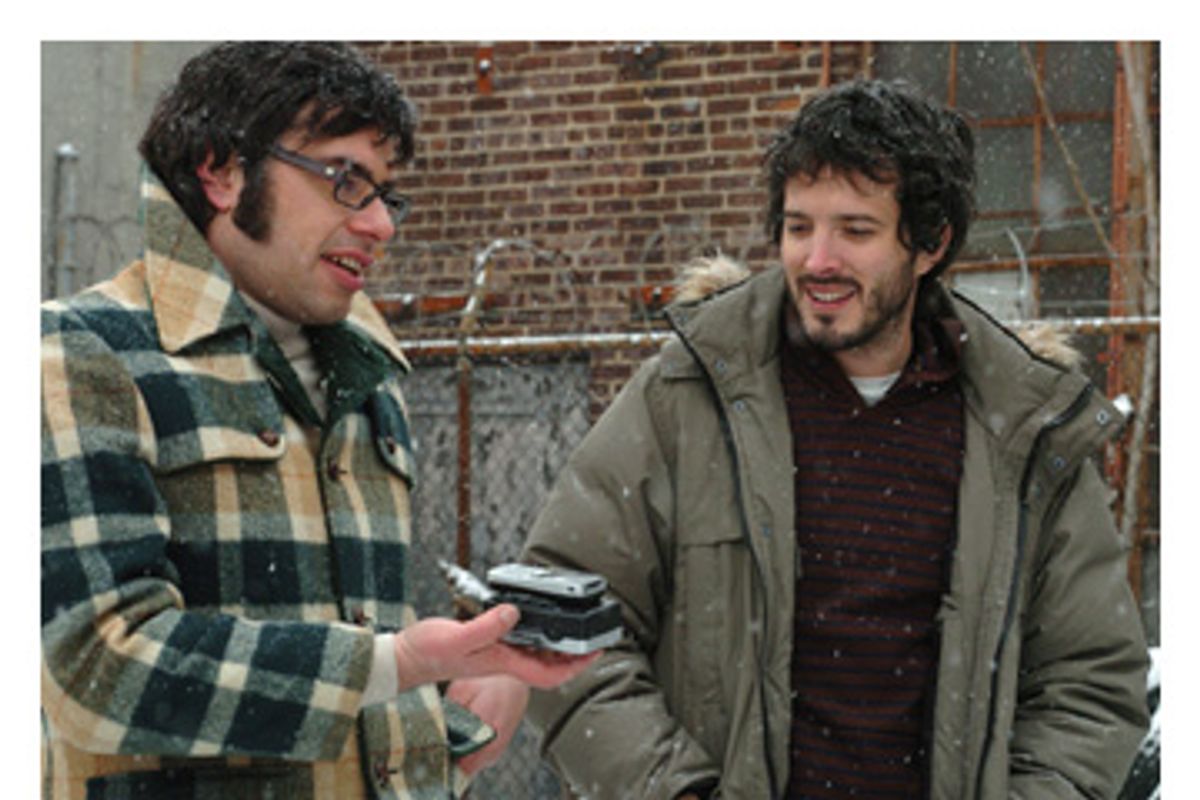 In a studio lot in Fort Greene, Brooklyn, N.Y., Bret McKenzie and Jemaine Clement are on the verge of wrapping "Flight of the Conchords," their new HBO comedy series. The "comedy-folk" duo, working with director James Bobin, have turned their stage performance into a 12-part series for American television, and in the final days of shooting, things are hectic. They're doing interviews during their lunch breaks, and Clement is delayed by a fitting for "David Bowie pants" for an upcoming gag.

Since the late '90s, the New Zealand comedians/musicians have toured the world as a two-man band, also called Flight of the Conchords, and amassed a cult following with their act -- a combination of witty, self-deprecating banter and jokey songs about subjects like robots or pretty girls at parties. (Sample lyric: "You're so beautiful / You could be a part-time model / But you'd probably still have to keep your normal job.")

Unlike most musical comedy groups, Flight of the Conchords are legitimately funny. Their lyrics are neither sophomoric nor overly precious, and their deadpan delivery is frequently hilarious. It's a dry form of comedy that is becoming increasingly in vogue in America, on shows like "Curb Your Enthusiasm" and "The Office," which, HBO surely hopes, should make the group's routine palatable to a wide audience.

The show, which is available online and premieres on HBO this Sunday, combines the absurd tone and the premise of "The Monkees" (members of a band, playing characters based on themselves, trying to make it) with the self-referential aesthetic of "Rushmore." In it, the two men wander the East Village, avoiding their lone, obsessive fan or dealing with their fumbling manager. It's light, polished and witty in a way that should appeal to urban hipsters as readily as rural grandmothers.

When Clement finally rushes in from his fitting to speak with Salon, he and McKenzie seem understandably tired from the long hours of work.

You went from performing live to doing radio, and now television. Is the TV show something that you always wanted to do? McKenzie: No. We never planned on making "Flight of the Conchords" into a TV show. The stage show was never developed to head in that direction. It was always a live act. Turning it into a television show was quite a challenge, to take what works onstage and translate it to a narrative sitcom. We spent quite a while developing how we were going to do that because the characters onstage weren't fully formed and work on a different level. Onstage we wouldn't have to set up half-hour story arcs; the characters didn't need to be as active in a story. Clement: Onstage we were making it up a lot -- not totally, we would have ideas, but we were improvising all the time. Onstage we don't really have conflicts; the drama inside a half-hour sitcom needs some conflict. McKenzie: As a live double act, it's classic to base your comedy on the conflict between the comedians onstage. It's a classic duo shtick -- that's a straight-up way to get some gags going -- but we kind of veered away from it. The strange thing about the Conchords as a live act, instead of putting each other down or creating conflict onstage, we were these two bumbling musicians who helped each other along, and that's what separated us from a lot of other duos. We tried to make it into a sitcom, and you couldn't -- that structure didn't really help in creating stories, so we had to add a little more antagonism between the characters. How did you end up launching your TV show in the United States? Did you try to create a TV show in New Zealand first? Clement: We did try. A friend of ours who's a producer convinced us, despite our better judgment and will, to write a script for New Zealand TV, and they turned it down. And when we first started [performing as] the Conchords, I used to work sometimes for a production company. [Someone there] asked me if I had any ideas for a show and I said, I'm doing this band thing, and I think that may be a good show, with two guys trying to get gigs and stuff -- basically the same idea. And he just screwed up his face really. Then we came [to the U.S.] for a comedy festival, and HBO asked us to do "One Night Stand" -- and this developed from that. So much of the humor in the show is deadpan. Are you concerned about the American reception to that kind of humor? Clement: I never thought about that. McKenzie: James, Jemaine and I, we're all big fans of understated comedy shows. That's a style we enjoy. I guess we made the show to amuse ourselves rather than being conscious of a particular audience. Clement: It's not just deadpan and subtle jokes. There are a lot of huge ridiculous jokes in it as well. McKenzie: The delivery is very dry. I guess it's more like a British show than an American show. Do you think there's anything particularly Kiwi about your sense of humor? McKenzie: Definitely. There's an understated sense of humor that's very normal in New Zealand. There are characters in New Zealand, like rural farmers, who would deliver things in a similar way to how we deliver them in the show. Clement: New Zealanders, generally speaking, are quite quiet. If an American is in a restaurant in New Zealand you can hear them above anything else, because the two countries just have different levels of speech. The show's aesthetic feels like Wes Anderson meets "Sex and the City." Clement: [Laughs.] I like Wes Anderson; Bret likes "Sex and the City." McKenzie: I like Wes Anderson and "Sex and the City." Clement: I wouldn't even watch "Sex and the City," but Bret does definitely watch "Sex and the City." McKenzie: My flat used to watch "Sex and the City." Clement: That's funny you should say that, because sometimes I would think that too, and it would be a complaint I would make when I didn't like the way a scene was going: I would say, "It's like 'Sex and the City.'"

Flight Of The Conchords Hbo Television