This version of the teenage detective may not be exactly as fans of the books remember her. So what? 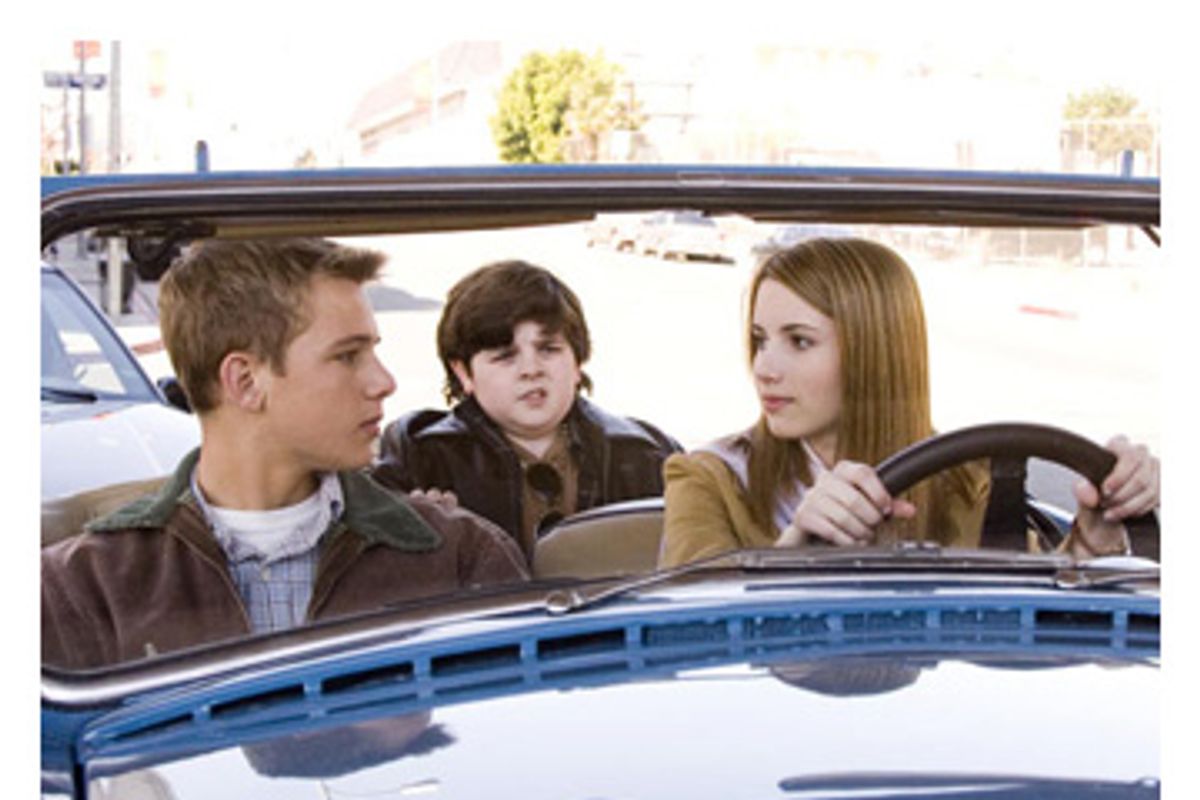 Andrew Fleming's "Nancy Drew," based on the series of fiercely beloved young-adult books, is likely to rile purist Nancy Drew fans. In the original books -- all published under the name Carolyn Keene, and most of them written by one Mildred A. Wirt Benson -- the teenage detective Nancy is confident and poised; here, she's socially awkward, a girl who wears willfully anachronistic clothes that seem strange to her peers. The books feature two sidekicks, Bess and George (both of them women), who appear only at the very beginning of the movie. And in the books, Nancy and her boyfriend, Ned Nickerson, are around 16 to 18. The actors who play them here -- Emma Roberts, of Nickelodeon's "Unfabulous," and Max Thieriot -- look much younger, barely old enough to drive, although Nancy spends plenty of time zipping around Los Angeles, where the movie is set, in her sporty "roadster," a blue Nash Metropolitan convertible.

But I think Fleming is going for something else here, something beyond slavish faithfulness to an enduring character. The first "Nancy Drew" mystery appeared in 1930, and the books have never been out of print, although they have been periodically updated: I remember reading one of the older, '30s versions as a kid in the '70s and marveling at the romantically retro use of the word "roadster" -- I wasn't exactly sure what type of a car that was, but I knew I surely wanted one.

Fleming's "Nancy Drew" is brushed with a similar wistfulness. The picture has some odd rhythms; mostly, it skims along, but in places it feels a bit disjointed. Yet it seems that Fleming was adamantly trying to avoid making "Nancy Drew" too antic; he wants to hold our attention, not grab it with garish, jumpy editing and overly complicated plot twists. The picture seems to be geared primarily toward preteen viewers (which may explain the youthful-looking casting), but in many ways, it's steadfastly adult, a picture that admits, with every frame, a desire to hang on to everything we value about traditional modes of movie storytelling, instead of just trying to figure out what will win big at the box office. At one point Nancy, obsessively trying to solve the mysterious death of an old-time movie star, roots around in the attic of the troubled woman's house, poring over scrapbooks, vintage movie stills and half-finished letters, hoping to unearth long-buried secrets. The movie, like its main character, lives in the present, but it can't help looking toward the past.

At the beginning of "Nancy Drew," our young supersleuth is getting ready to temporarily leave her home in River Heights -- a fictional Anytown, U.S.A., a place with no location on the map but which seems as dreamily real as the smell of home cooking -- for the West Coast. Her widower father, lawyer Carson Drew (Tate Donovan, tricked out in spiffy fedoras and nostalgically dadlike cardigans), proud of his daughter but anxious to keep her out of trouble, has made her promise to take a break from sleuthing. That's a promise Nancy can't keep. Unbeknownst to her father, she's rented the home of a movie star, Dehlia Draycott (Laura Harring, the dark, sultry vixen of "Mulholland Dr."), who died under mysterious circumstances. Her sprawling mansion, a Hollywood relic swathed in weeds, has a mystery built right into it, and that suits Nancy just fine.

But Nancy also has to go to school -- Hollywood High School, to be exact -- where her confidence and overtuned sense of organization make her, well, unbearable. Fleming (who also co-wrote the script, with Tiffany Paulsen) doesn't strive to get at the reality of teenage girls; he's more interested in the idea of them, which may be the only way to get at the reality, anyway.

Fleming has already made two wonderful movies that capture both the exuberance and the anxiety of teenagerhood, the 1996 teen-wicca horror-comedy "The Craft," and the 1999 "Dick," which tells the story of Watergate through the eyes of two teenage girls who, inexplicably but in a weirdly believable way, develop a crush on Richard Nixon. "Nancy Drew" is lighter, frothier, than either of those two films, and not as structurally sound. But its inherent sweetness is irresistible. Fleming and Paulsen aren't afraid to show us what a pill Nancy is: She can't help being an overachiever -- when we see her outrunning the other girls at the school track, the smile on her face is all exhilaration, with no smugness -- but even so, she's annoying as heck. The movie makes a grand joke out of that, and Roberts, with lots of soda-pop effervescence, plays along: As she puts the finishing touches on the fantastically detailed model cathedral she's built for one of her classes, she explains apologetically, "I only had time for 12 flying buttresses -- in actuality, there are 26."

Nancy's peers -- among them two hilariously overdressed trend-chasing Hollywood princesses, played by Daniella Monet and Kelly Vitz, and a slightly chubby, overeager practical joker played by Josh Flitter -- are eventually won over by her sincerity, her smarts and her cheerful nature. And the mystery -- which involves a young single mom played by Rachael Leigh Cook and an imperious, fat-cat lawyer played by Barry Bostwick -- ultimately comes together after a final scramble that takes place, fittingly, in a decrepit, eerily beautiful movie palace.

"Nancy Drew" is partly about the way it's so hard to fit in when you're a teenager. But in the end, it's even more about feeling like a misfit in the present. Nancy's clothes tell much of the story. (The movie's costume designer is Jeffrey Kurland, who has worked on many of Woody Allen's films.) She throws a birthday party for herself, greeting her guests in a '60s-style cocktail sheath, a slim, tailored column of polka dots and stripes that's both youthful and endearingly old-school. When an acquaintance remarks on another of her outfits, a trim jersey dress with a tiny coordinating jacket, she replies modestly that she made it herself, from one of her mother's old patterns.

And when, early in the movie, Nancy's snooty classmates eye the penny loafers she's wearing ("Did your podatrist suggest them, or are you being ironic?"), she responds simply, "I just like old things." Nancy Drew purists may be unhappy with Fleming's admittedly tweaked vision of their heroine. But his movie captures a greater truth, I think, about the way very old and sometimes seemingly out-of-date stories can move us. Since 1930, when Nancy first appeared in her neat cloche hats and smartly tailored frocks, the Nancy Drew books have not only survived but thrived, continuing to attract young (and not-so-young) readers today. Fleming's movie is, at the very least, a tribute to Nancy Drew's longevity -- and a valentine to all of us who, even as we strive to live in the present, just like old things.