Twenty years after raising two boys with my first wife, I'm doing it again with my second. So don't call me a grump if I'm not charmed by every damn Little Leaguer or cute story about spitting. 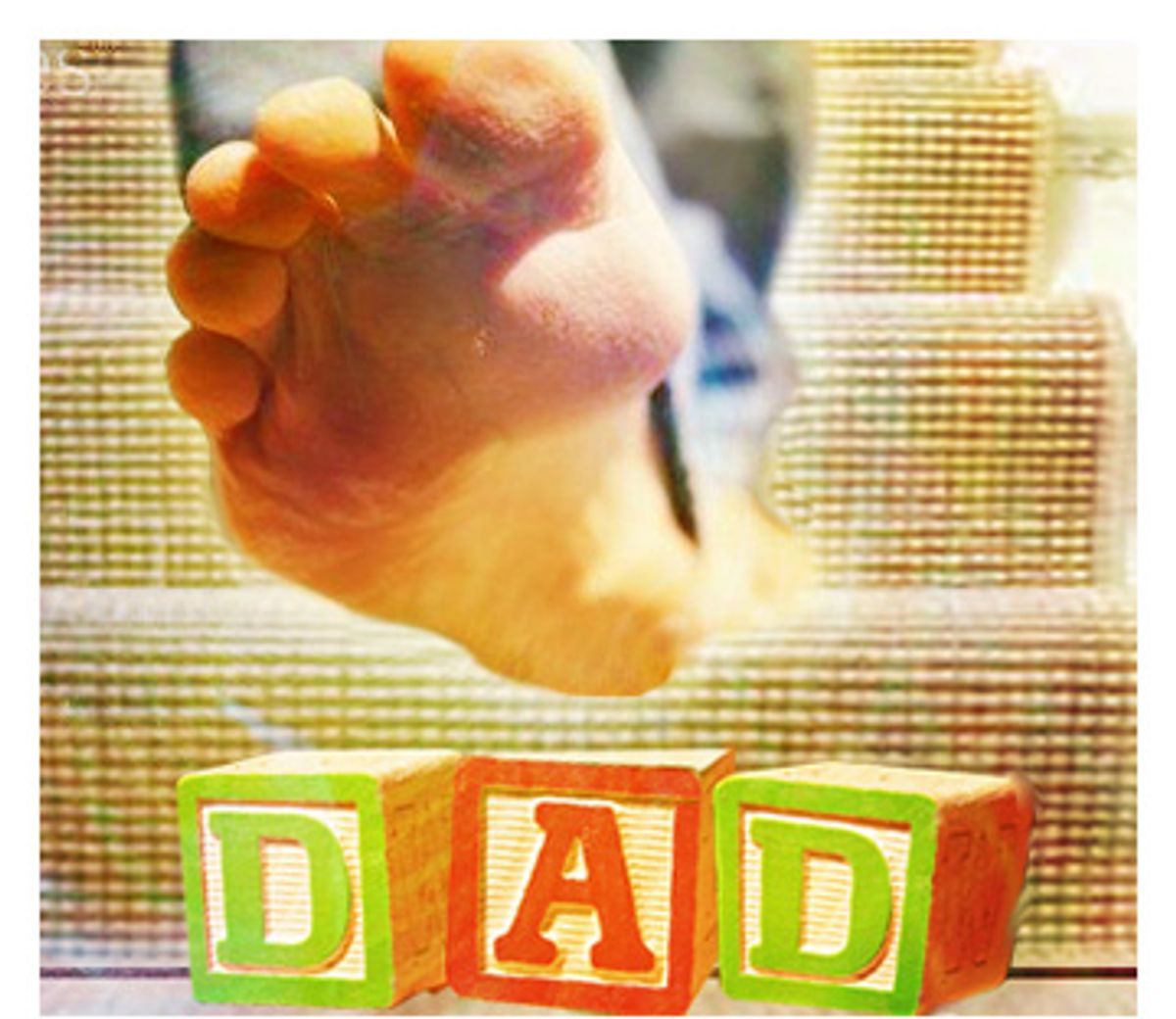 Bone-dissolving baby wail in lieu of a drum roll, please.

The devoted attention required for details.

I'm one of those dads who's pretty good at seeing the big picture. Like kids need an inoculation every 10 or 20 years or so. It isn't vital that I be kept in the loop of every detail, say when I'm on the phone trying to assure a prospective baby sitter's mother that there are no molesters in our household while my offspring is talking at me, as follows:

Especially when the payoff, when it finally comes, is something earth-shattering like this: "He scraped his knee today."

Being forced to look at things I don't want to.

"Dad, Dad, I'm not kidding, you won't believe this! That guy's wearing a RED SHIRT!!!

Being forced to look at things I don't want to two inches from my face.

Nothing against hissing potato bugs, personally.

Needing to employ painstaking logic to explain things about the world that most civilized human beings understand instinctually.

Such as why it's not advisable to dribble milk on vintage photographs. And so forth. Do I really need to list them all?

Being forced to play games that bored me light-years ago.

Simon says do a backward somersault.

Listening to the music of pots banging.

Listening to the music of pots banging two inches from my face.

Why is the floor so far below me this time around? Why does it come up and hit me on the chin so quickly? Why is it so hard to rise from it, all the way back up to where I belong? These and many more are questions I have absolutely zero interest in thinking about.

I'm too tired to make up a category for this one. And I realize it's, like, blasphemous? Doting dads are not supposed to even think such thoughts?

But the truth is that, after a lot of soul-searching, I'm just not as fascinated as they are to see which part of the fern plant they can spit their 15th cherry pit into. I'm also not fascinated by accompanying their mother to the doctor for the annual dose of wisdom, especially when the doctor was a rubber band-chewer my first boys used to beat up in third grade, and double especially when there's a broken stick left by some other child in the waiting room. "Dad! Dad! Look! You gotta see this! A stick! A broken one!!!"

Speaking of their mother, whom, it goes without saying -- so may I forgo saying it from now on? -- I hold more dear than life itself: 1) She is 10 or 20 years younger than I. 2) She was wearing braces when I was experiencing the miracle of diapering my first babes. 3) She doesn't quite grasp the notion that the incoming generation is engineered specifically to supplant the outgoing one. So could someone please gently convince her that she won't have her union pass yanked if she doesn't exclaim over each knuckle scab: "What happened!?!? Did it hurt? Was there a lot of blood? Did you cry? Are you positive you're OK?"

And so the question arises. Am I a grouch this time around? Just because I will no longer subject myself to any more moon bounce contraptions, preferring to have my center of gravity where I can keep an eye on it? Just because I devise games like chase-the-flashlight-beam where I maintain a sedentary position while they jump about like caffeinated chimps? Just because I cut off less promising conversations with a strategically strong word or two? ("Who the bloody hell cares why the WalMart lady didn't give you a damn sticker this time?"), or because I'm no longer charmed by the spectacle of Little Leaguers missing every single grounder (get your mitt down there, rubber band-chewer!), or because I no longer find myself gasping when the boys choke on a Rice Krispie -- not because I don't care, but because I am in possession of the readily available yet seemingly arcane knowledge that it'll wash the fuck down?

Yes, well, I would relish the opportunity to discuss these issues at length. But I happen to be a mite preoccupied at the moment ... by a competition ... stand back, please ... to see how well I can spit this cherry pit into that fern plant? Wait, wait, you gotta see this! I'm not kidding! LOOK!!!

Daniel Asa Rose is the author, most recently, of "Larry's Kidney: Being the True Story of How I Found Myself in China With My Black-Sheep Cousin and His Mail-Order Bride, Skirting the Law to Get Him a Transplant ... and Save His Life" – named one of the top books of the year by Publishers Weekly.