Spinning the disaster in Gaza

Bush and Olmert scramble to prop up Abbas, but the Hamas takeover boosts Iran and leaves hopes for a Palestinian state in tatters. 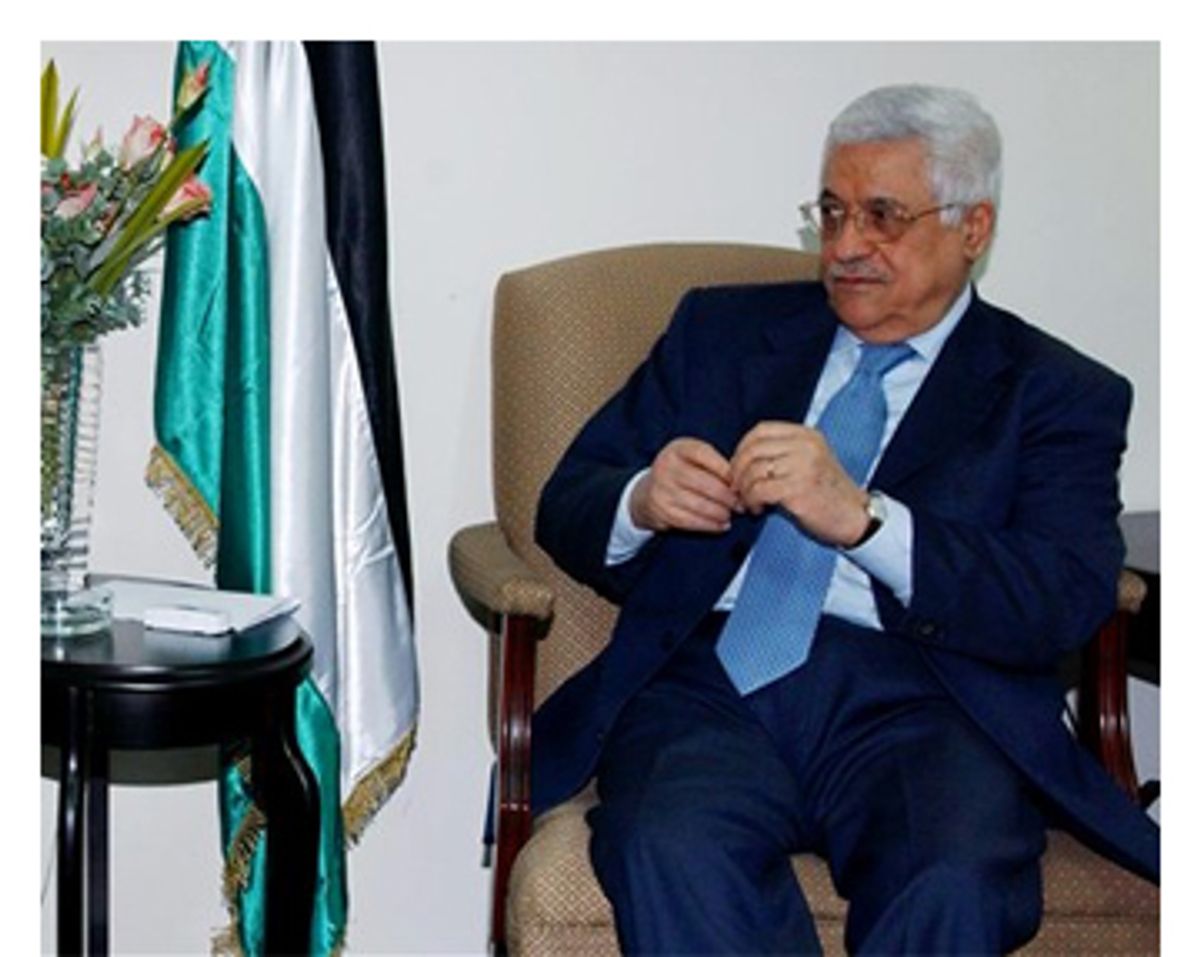 As Hamas completed its violent takeover of Gaza last week, officials in the Israeli and American capitals realized they had a disaster on their hands. Both governments' flawed policies toward the shattered Palestinian Authority had just been delivered a major blow. Images of Hamas fighters throwing one of their Fatah rivals out of a high-rise window to his death, and of the brutal assassination of a senior Fatah official, were broadcast worldwide and painted an ominous picture: A militant Islamic group, whose record includes some of the worst terrorist attacks on Israelis, had just taken control of a small but contiguous territory of nearly 1.5 million inhabitants.

Strategically, the Gaza takeover marked a clear victory for Iran and its allies in the Arab world, and another setback for the pro-American, moderate Arab nations willing to compromise with Israel. After winning the Palestinian parliamentary election in January 2006, Hamas grew ever stronger in the Gaza Strip as violence increased between Hamas and Fatah. Under Saudi pressure, both factions eventually agreed to form a "unity government," but it couldn't hold. Violence resumed, and Hamas proved itself a more effective force than Fatah, whose commanders fled Gaza, leaving their soldiers alone in the final battle, which lasted barely three days.

From the Israeli perspective, less than a year after the Israeli Defense Forces failed to defeat Hezbollah and its allies in Lebanon, the Hamas takeover in Gaza is a disaster. And for the Bush administration, preoccupied with the quagmire in Iraq, Gaza marks another failure in the Middle East. The White House forced Israel to allow Hamas' participation in last year's election, thus legitimizing Hamas' political role, but the strategy backfired with Hamas' decisive victory. Faced with the disappointing outcome, U.S. and Israeli officials sought to "isolate the extremists and strengthen the moderates" through a diplomatic and economic boycott of Hamas, and by pledging further support for Fatah leader Mahmoud Abbas, who kept his position as the president of the weakened Palestinian Authority. But even despite European support for this policy, Hamas withstood all pressure to recognize Israel's right to exist, renounce terror and abide by past Israeli-Palestinian agreements. At the same time, Israel's willingness to help Abbas was at best half-hearted. It never went beyond token moves and empty gestures, usually citing security concerns, domestic political problems or Abbas' weakness.

U.S. and Israeli leaders scrambled to spin the new reality in Gaza favorably. Instead of mourning Abbas' clear defeat, Israeli Prime Minister Ehud Olmert spoke of "a new opportunity," as if a good thing had happened. U.S. and European governments were quick to lift the boycott on the Palestinian Authority and resume foreign aid, while Israel pledged to follow suit and release frozen Palestinian tax revenues. On Tuesday, Olmert visited President Bush at the White House, and as always, both committed themselves to the elusive "two-state solution" for Israel and Palestine. Olmert pledged to make "every possible effort" to cooperate with Abbas, while Bush vowed to strengthen Abbas and Salam Fayyad, the hastily appointed Fatah prime minister in the West Bank, whom Bush called "a good fellow." Speaking to reporters at the Oval Office, Olmert said, "I'm absolutely determined that there is an opportunity," and pledged to supply the conditions for a Palestinian state. Bush again spoke of an "ideological conflict" between moderates and extremists, tying together Iraq, Lebanon and Abbas in a fledgling web of democracy.

It was hard to believe. Only days ago, Abbas was seen as a hopeless weakling who could offer little beyond nice words. Israeli officials showed respect for Abbas' stated anti-terrorist position but failed to persuade him to confront Hamas and opposed any efforts to accommodate the militants. Even within Fatah, Abbas has had only limited authority. Lacking the charisma and public admiration of his predecessor, Yasser Arafat, the soft-spoken Abbas could not rein in the many offshoots and private armies that spun off from Fatah. And he has only been further diminished by the humiliating defeat in Gaza at the hands of the smaller but more disciplined Hamas force.

Even the remaining few in Israel's "peace camp" have little faith in Abbas. One prominent leader of the political left, who has a long history of talking to Palestinian leaders, told me recently that Israel should still work to negotiate a draft peace agreement with Abbas -- even knowing full well that he will not be able to implement it. "It's important for Israel's legitimacy," the Israeli leader said. Realistically, the Bush White House has long shared the view of Abbas as an ineffective leader, but it had no alternative Palestinian leader to back -- hence its continued support for Abbas.

Their doubts and disappointment notwithstanding, both Bush and Olmert have an interest in casting Abbas and the situation in Gaza in a positive light. Olmert, in particular, is trying to recover from his unpopularity at home. His trip to Washington has been part of a comeback effort, following the devastating report of a Commission of Inquiry over his decision to launch the war in Lebanon last year and his conduct of it. Last week, Olmert enjoyed two rare moments of relief: His old friend, former Prime Minister Ehud Barak, won the Labor Party primary and joined Olmert's cabinet as defense minister. A day later, Israeli elder statesman Shimon Peres, a political ally of Olmert's, was elected to the titular job of Israel's state president. Bush played his part by praising Olmert's "strong leadership," but the events in Gaza threaten to undermine Olmert's rehabilitated image.

Prior to Olmert's Washington trip, U.S. and Israeli policies toward the Palestinians did not appear to be in a state of harmony. Secretary of State Condoleezza Rice, who has framed Palestinian independence and statehood as a moral issue that is in the United States' interest, was pushing for a "political horizon" -- namely, an Israeli commitment to a future West Bank withdrawal to facilitate the creation of a Palestinian state. Olmert reluctantly agreed to discuss it with Abbas. The American advisor to the Palestinian Authority, three-star General Keith Dayton, believed that Abbas' loyal forces in Gaza could be developed and become effective in maintaining security, and that Israel could therefore ease movement restrictions on Palestinians in the West Bank. But Israel's security establishment dismissed Dayton's plan as a fairy tale, revealing their disbelief in the strength of Fatah. Now they are saying, "We told you so."

Though Israel never put this forth as its official policy, it has long sought to isolate the two geographically separate parts of the Palestinian Authority in the West Bank and Gaza. The Hamas takeover has deepened that separation, through the de facto creation of two different entities: "Hamastan" in Gaza, where there are no longer any Israelis, but where Israel controls the borders, sea and air space; and "Fatahstan" in the West Bank, where Abbas has limited control over several Palestinian enclaves, surrounded by Israeli settlements and roads, and the Israeli Defense Forces control overall security. The complexity and absurdity of the developing scenario can be seen in this prospect: Hamas controls Gaza from the inside, vowing to destroy Israel, but remains at Israel's mercy when it comes to supplies of electricity, water, food and other basics needed for the dense and beleaguered population.

Olmert and Bush now pledge to support and promote the West Bank "moderates," and prove to the Gaza "extremists" that moderation pays off. But this policy of separate treatment is unlikely to succeed. Hamas and its regional allies are not going to sit still and wait for Israel and the United States to overthrow them. Moreover, following recent rocket attacks on Israel's territory from Lebanon and Gaza -- two areas from which Israel has evacuated -- another West Bank withdrawal appears, essentially, out of the question. Israelis would not want their population centers and one international airport to be attacked, and given Olmert's precarious political stature, he will not risk his coalition with a withdrawal plan that would alienate his right-wing coalition partners. Between Olmert's narrow maneuvering room and Abbas' chronic weakness, any possibility of Palestinian statehood in the foreseeable future is beyond belief.

Hamas also faces a formidable challenge. Killing off adversaries, taking over their headquarters and looting their homes are easier tasks than feeding 1.5 million people. Religious zeal and militia discipline are not enough, and Hamas will next have to find a modus vivendi with Israel. In the aftermath of its victory in Gaza, Hamas focused on consolidating its hold on power rather than rocketing Israeli towns and villages -- but there is no stable cease-fire. Hamas may well try to provoke an Israeli military response that could unify the Palestinians against their occupiers once again.

The situation remains combustible. Israel will try to blockade and contain Gaza while trying to shore up Abbas and Fatah in the West Bank. And there is little appetite to invade Gaza among Israel's national security establishment. But another wave of rockets or suicide attacks by Hamas might push Israel into another major operation. Meanwhile, Israel now has to contend with hundreds of Fatah supporters and their families who fled to the border crossing, pleading for Israeli permission to move to the West Bank. If not properly cared for, this pressing exodus from Gaza may turn into another refugee problem, one of many facets of a deepening crisis in the region.