The billionaire mayor of New York could easily fund a bid for the presidency. But what are his political convictions? 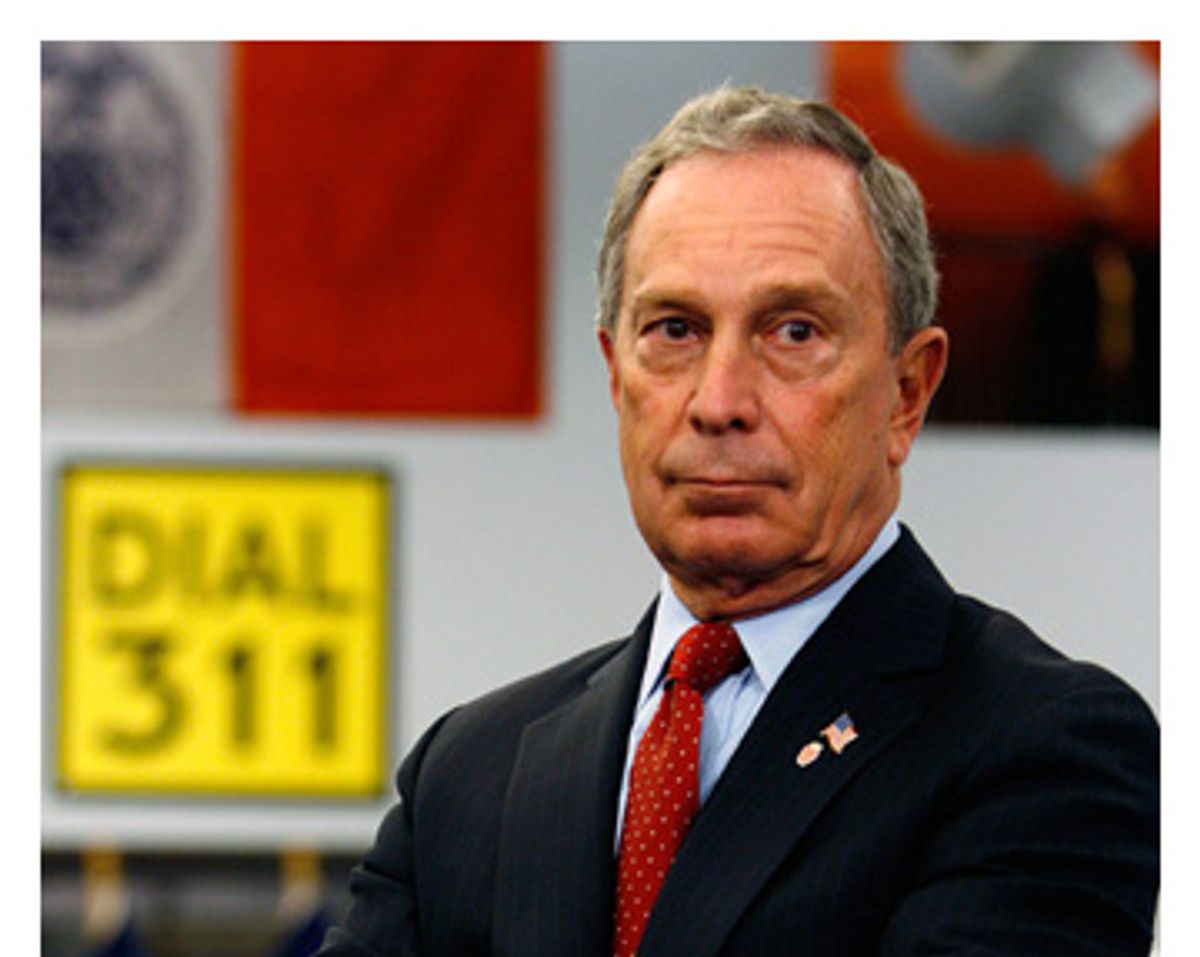 The logic of Michael Bloomberg's potential presidential candidacy -- which he seemed to advance Tuesday by ostentatiously abandoning the Republican Party -- isn't obvious at first glance.

As a public figure, the New York mayor is boring and managerial rather than charismatic or inspirational. He possesses neither the manic entertainment value of a Ross Perot nor the paranoid messianism of a Ralph Nader. On a personal level, Bloomberg isn't presidential in the traditional sense. He's a divorced Jewish businessman, with a girlfriend who looks about 6 inches taller than he is.

There is almost nothing plausible about a Bloomberg bid -- except that he is able and might be willing to spend an obscene amount of money to buy the presidency. One friend of the mayor's says he believes that the media mogul would spend as much as $2 billion to win the White House. (If so, he would still have more than that to tide him over through retirement.)

For the moment, Bloomberg denies any such plan, vowing to serve out his tenure as mayor until 2009, when term limits prevent him from seeking a third term. But his aides and associates have been promoting the idea that he should run as an independent for president, which they would not be doing without some encouragement from him. In that respect, at least, he is a typically coy politician whose promises today may not mean much tomorrow.

If Bloomberg does run for president next year, he will have some explaining to do. Two billion dollars would buy a lot of television advertising, but no amount of money will stop voters from asking questions.

For instance, voters will want to know why he joined the Republican Party after a lifetime supporting Democrats. And they may not like the answer when they learn that he essentially bought the New York Republican mayoral nomination from the party's leaders and then narrowly won the election by spending an unprecedented $70 million. In a stunning act of overkill, he spent even more to win reelection against a hapless, hopelessly underfunded Democratic opponent two years ago.

Voters will also want to know whether he suddenly left the Republican Party only because its prospects are so dim. Only three years ago, he heartily endorsed the reelection of George W. Bush and Dick Cheney, even vowing to carry New York City for the ticket. Those were the days when he was still an enthusiastic Republican booster and generous party donor, and was praising the GOP as the party of "honesty, efficiency, compassion and inclusion." That sounds ridiculous now, of course, but was he cynically mouthing those banalities, or did he believe them? It is hard to say which would be worse.

Voters might also wonder why Bloomberg left the Democratic Party in the first place, especially when his ideological outlook has always been difficult to distinguish from that of most Democrats on matters such as reproductive and gay rights, gun and tobacco controls, immigration, global warming, minimum wages, healthcare and a long list of other issues. Most New Yorkers are Democrats and few would disagree with Michael Long, the leader of the state's Conservative Party, who likes Bloomberg personally but says that he is indistinguishable from any "liberal Democrat." (No doubt Long was thinking about the hefty tax increase that Bloomberg imposed on the city's property owners in 2002, a bad memory that Republicans are sure to mention now that he has spurned them.)

Actually, there is an important difference between Bloomberg and most liberal Democrats. Dating back to his infatuation with Bush, the mayor has always been an enthusiastic supporter of the war in Iraq. He marched lockstep in the Bush drive toward invasion when he addressed the United Nations General Assembly in September 2002: "Freedom comes at a price, and tragically, sometimes that price is the commitment to defend freedom by arms. America has been, is, and always will be willing to do its duty -- to sacrifice even its own blood, so that people everywhere can live as individuals responsible for their own destinies." (As Wayne Barrett once pointed out in the Village Voice, the man spouting this brave talk got out of the Vietnam draft because his feet are flat.)

Bloomberg's pro-war rhetoric dutifully echoed the White House line connecting Saddam Hussein with al-Qaida and 9/11, almost as if Karl Rove had programmed his brain. "I'm voting for George W. Bush and it's mainly because I think we have to strike back at terrorists," he said in September 2004. "To argue that Saddam Hussein wasn't a terrorist is ridiculous. He used mustard gas, or some kind of gas, against his own people."

Should he ultimately decide to run for president, Bloomberg and his clever political advisors will have to find some way to backtrack from his unpopular statements about Iraq. But that would only return us to the fundamental question about this protean businessman and politician: Does he have any political convictions that transcend his own ambitions?