This unmooring, bleakly beautiful film -- starring Angelina Jolie as Mariane Pearl -- gets to the essence of the unstable world we now live in. 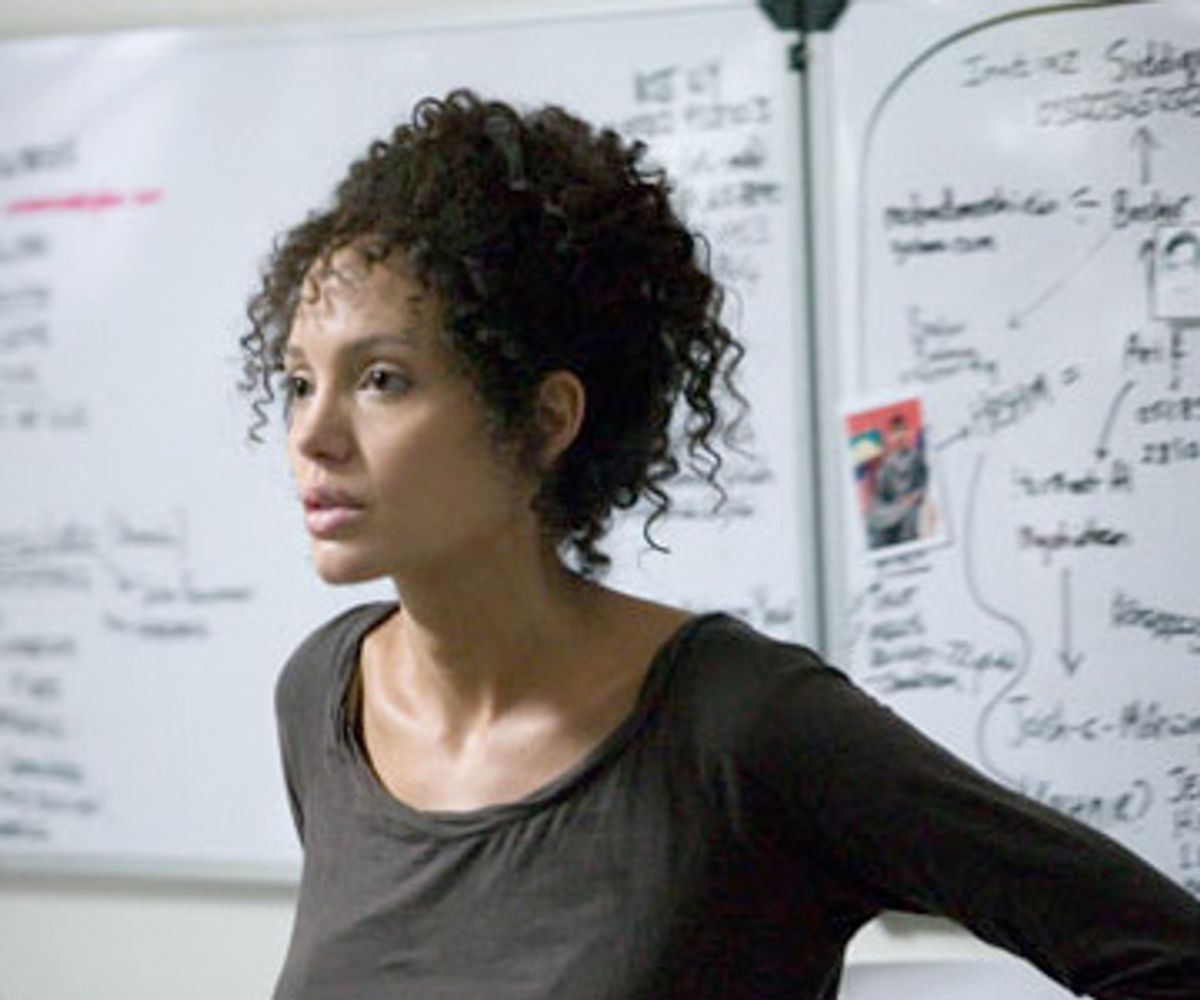 Mariane Pearl's 2003 "A Mighty Heart," a memoir of her life with her husband, journalist Daniel Pearl, and her efforts to locate him after his kidnapping by Islamic extremists in Karachi, Pakistan, in early 2002 -- a kidnapping that ended in his beheading -- is an almost unassessable book. Its clear-eyed vision notwithstanding, "A Mighty Heart" is so infused with personal pain that deeming it "good" or "bad" is nearly impossible: Daniel and Mariane had been married only a few years, virtual newlyweds, and Mariane was six months' pregnant with their first child. She opens the book by describing the morning of Daniel's disappearance, the sense of security and well-being she felt waking up nestled in his arms: "I love these sweet moments of oblivion and the peace they bring me. No matter where we are -- Croatia, Beirut, Bombay -- this is my shelter. This is our way of meeting the challenge, of confronting the chaos of the world."

That sense of one small, private world shattering within the larger and even more unstable one around it is the essence of Michael Winterbottom's unmooring, bleakly beautiful film version of "A Mighty Heart." There's no safety here: "A Mighty Heart" understands, deeply and intuitively, the nature of the changed and in some ways unfathomable world we now live in.

Winterbottom and his screenwriter, John Orloff, working from Mariane Pearl's book, interlace the story of Daniel Pearl's disappearance and the subsequent, desperate search for him, undertaken by Americans and Pakistanis working together, with vignettes of the couple's life together: The picture's rhythms are unsettling, shifting between lulling sequences steeped in domestic contentment and moments of raw horror and doubt, fragments of time in which Mariane faces the terror of realizing that she may never see her husband again. I suspect some people will view Mariane's story -- and the performance of Angelina Jolie, who plays her -- as heroic. And, within their extremely different parameters, both are. But at the core of this movie, and of this story, there's something both more somber and more fierce than any quality that can tidily be called heroism. In "A Mighty Heart," the link between the personal and the political is as vital, and as vulnerable, as an artery. Bravery is merely the ability to move from day to day without allowing yourself to become frozen with terror and fear, to try to forge a path through cultural mistrust and misunderstanding instead of conveniently around it. This is a direct and lacerating piece of filmmaking, one that not only recounts a specific event, but maps at least a small corner of a newly confounding and complicated world.

On Jan. 23, 2002, Daniel Pearl (he's played here by Dan Futterman, an actor whose demeanor is at once grave and elfin -- he was also the screenwriter for "Capote"), the South Asia bureau chief for the Wall Street Journal, left the house in Karachi where he was living with Mariane and a friend and colleague, Asra Nomani (Archie Panjabi), for a meeting with a secret source. [Editor's note: Salon sent Nomani to Pakistan as a correspondent; Mariane Pearl has written for Salon.] The meeting had been arranged by a go-between: A Western journalist can do nothing in Karachi without first establishing a reliable network of intermediaries. Daniel was researching a story on shoe bomber Richard Reid; he had managed to land an appointment with Mubarik Ali Gilani, a Pakistani cleric previously associated with Islamic militants. Randall Bennett (Will Patton), of the U.S. Consulate, advises against the meeting, although one of Daniel's local advisors, Kaleem Yusuf (Telal Saeed), suggests that Daniel will be safe as long as he meets Gilani in an open, public location.

Daniel misses dinner that night -- Winterbottom shows us the table, carefully laid for a dinner party, with just one empty place setting, maybe an obvious piece of dramatic shorthand but also a piercingly straightforward one. When Daniel fails to call either Mariane or his editors at the paper, Mariane -- a journalist herself, once having hosted a radio show in France -- calls in Pakistani law enforcement, led by a methodical investigator known as Captain (played by Irrfan Khan, the wonderful Indian actor most recently seen in Mira Nair's "The Namesake"). Eventually, the FBI is brought in, as well as some of Daniel's Wall Street Journal colleagues and editors. What follows is a maddening and nightmarish account of what we all know will be a fruitless search, a tangle of false starts and dead ends represented by the increasingly unreadable chart Asra and Mariane have placed on their wall, a thicket of names circled, crossed out and underscored, connected by heavy arrows and tentative ones.

The militant group claiming responsibility for Daniel's kidnapping claim that he's a member of the CIA; then they claim he's working for Mossad; later, it seems that his gravest sin is simply being Jewish. "A Mighty Heart" is structured like a thriller, but it's one that follows a troubling logic -- essentially, a logic in which the truth, any truth, can seemingly be made up by people whose convictions (religious or otherwise) are strong enough. At one point Daniel's captors claim they're holding him in retaliation for the mistreatment of prisoners in Guantánamo, and subjecting him to similar cruelties. But I don't think Winterbottom is making a one-to-one correlation here; he doesn't turn the story of Daniel and Mariane Pearl into a self-flagellating, "Well, we asked for it" assessment of foreign policy. He's too humane for that. When one of the Americans working on the case confesses to Mariane that he'd love to watch Daniel's kidnappers being beaten and tortured -- just as they claim they're beating and torturing Daniel -- Jolie plays the moment not with shock or dismay or even incomprehension. The look that passes across her face in this scene is one of restrained anguish, as if she were recognizing that this is an understandable response to violence, but a nonetheless unacceptable one, an impulse that has to be resisted if she's to hold on to her humanity.

Winterbottom intercuts the search for Daniel with scenes from his life with Mariane. But even at their warmest and loveliest, some of those scenes are subtly portentous: As Daniel and Mariane prepare to start what will be their last day together, Winterbottom and his cinematographer Marcel Zyskind (who have worked together on numerous projects, including "Tristram Shandy: A Cock and Bull Story" and "9 Songs") show the couple separated by glass windows, reflected in surfaces as if fate were trying to gently prepare them for the separation to come. Winterbottom is that rare filmmaker who can deal with politically charged content in a vivid and passionate way -- as he did in the 1997 "Welcome to Sarajevo" -- without turning a picture into a screed. (He also co-directed, with Mat Whitecross, the 2006 "The Road to Guantánamo," a docudrama about the Tipton Three, a group of British Muslims who were held, and tortured, at Guantánamo for two years on nonexistent charges.) I think Winterbottom proceeds from the notion that politics always touch us personally, whether we're aware of it or not, that things happening half a world away can change us, harm us or enrich us in ways we can never calculate.

If that's his goal, Jolie is, perhaps, the best not-so-secret weapon he could ask for. This is a sure-footed, iron-willed performance, the sort that usually sits squarely at the center of a picture, commanding attention. But instead of sitting at the center, Jolie's Mariane is the center -- maybe a subtle distinction, but a crucial one. Mariane is alternately sturdy and wraithlike, invincible and fragile. In one of the movie's most touching scenes, one of Daniel's editors from the paper, John Bussey (played by Denis O'Hare), worries aloud, to the people who have gathered in the house during the nearly monthlong search for Daniel, that the pregnant Mariane may not be taking good care of herself. With Mariane, distracted and troubled, in the other room, he reads something from a pregnancy book about how important it is for an expectant woman not to resist the urge to urinate. Amused, someone asks him if he has children himself -- the answer is no -- but the moment suggests a kind of rallying defiance, an urge to honor the absent Daniel by making sure that his wife, determined but also vulnerable, is well-protected.

Jolie isn't afraid to show that vulnerability; this is a quiet performance, not a flashy one, and Winterbottom shapes the movie around it as if he were building a protective nest. In a late scene, Mariane appears on television to discuss her husband's death, to make a plea for greater understanding, rather than hatred or bitterness, between Westerners and the Muslim world. The interviewer asks her how she felt as she watched Pearl's execution, captured on videotape. Her icy response, in French, not English -- "Have you no decency?" -- is an excoriation of the more rabidly sensationalistic arm of the press. She believes in the kind of journalism her husband practiced -- which she defines as a constant seeking of the truth -- but not this kind. Mariane had not watched the tape, but even that was beside the point. Some journalists wanted to turn her tragedy into spectacle. Winterbottom, doing his job as a filmmaker, turns it into drama. The difference is, he knows when to avert his eyes.