In his most persuasive film yet, Michael Moore gives the U.S. healthcare system a full exam -- and offers up a grim prognosis. 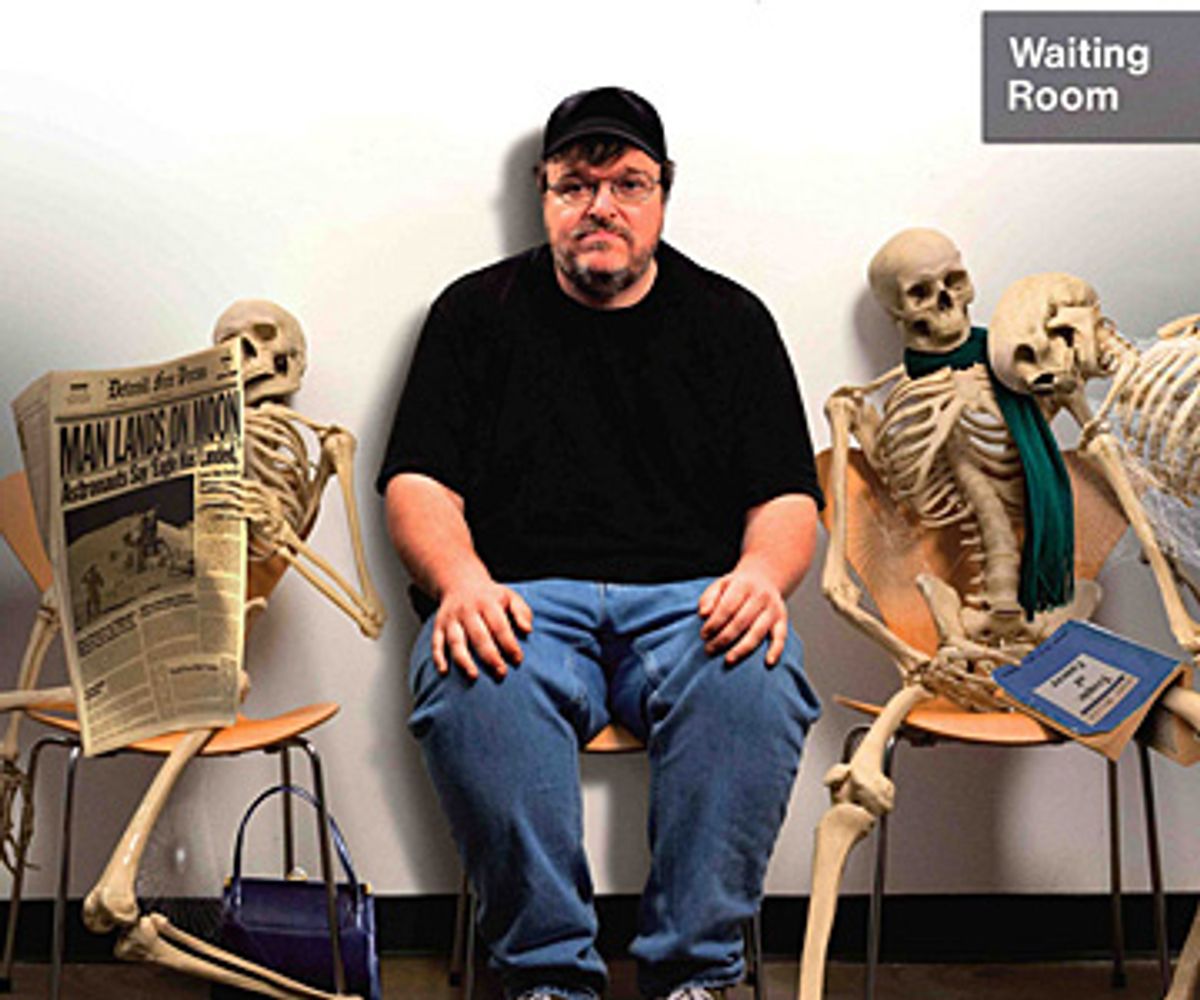 There's no other way to come at Michael Moore's "Sicko" than to state upfront that his essential argument -- that it's shameful that America, the richest country in the world, fails to provide healthcare for all its citizens -- is irrefutable. No matter how you feel about Moore or his filmmaking tactics, there's little here that any sane, reasonable human could argue with: We've fashioned a system in which big corporations get rich off our illnesses, or even just off the regular preventive steps that most of us take to avoid getting sick. (How many of us have gone to get a routine colonoscopy or pap smear, allegedly "covered" by insurance and designed to detect potentially life-threatening problems early on, only to be hit with several hundred dollars' worth of co-payments and lab fees? On top of whatever premiums we pay to begin with? And that's just the small stuff.) In our system (even calling it a system seems to be granting it too much respect) the poor aren't provided for, and even those in the middle class -- as Moore shows, in a series of bone-rattling anecdotes that may rob your sleep -- can literally lose the roof above their heads or, worse yet, their lives, simply because they either can't afford or are denied healthcare. And that's people who are actually insured.

"Sicko" is a blunt, effective picture, and there's no doubt that Moore feels passionately about this subject, even discounting his own considerably bloated need to be the center of attention. A sentence like that is almost always followed by a "but," and here it comes: It's perfectly valid to agree with Moore's thesis and still have problems with his filmmaking, his choices of what to put where, his way of eliding certain realities lest they weaken his (already considerably strong) case. And while "Sicko" is, in my view, the most persuasive and least aggravating of all of Moore's movies, it still bears many of the frustrating Moore earmarks -- most notably, a deliberately simplistic desire to render everything in black-and-white terms, as if he didn't trust his audience enough to follow him into some of the far more complex gray areas.

As Moore explains in the film, when he undertook this project, he solicited e-mail from people who'd had bad experiences with healthcare or insurance. Overwhelmed by the response, he took his camera around the country -- and into Canada, Great Britain, France and even Cuba -- to commit people's stories to tape. The Americans' stories range from simply depressing to utterly heartbreaking: A 60ish couple, both of them former professionals with good jobs, lose everything when the two of them incur serious healthcare costs; they're forced to move into a small storage room in their daughter's basement. A young mother in Southern California tells how her baby died: The infant was seriously ill, and her treatment was delayed as she was turned away from one hospital and shuttled to another. Moore, to his credit, plays her grief straight, realizing he doesn't need any additional "Adagio for Strings" pathos to intensify this story.

Unfortunately, he reserves Samuel Barber's overused weeper for another scene, featuring footage from 1996 government hearings into managed healthcare standards in which a doctor formerly employed by Humana testified that (among other horrors) physicians in the system were actually given bonuses for denying healthcare. The sequence would have been powerful enough by itself, but Moore just can't resist cranking up the poignant music. Nor can he resist tucking in, here and there, his trademark found film footage, often run at high speeds -- you know, comic clips of doctors sawing off limbs and the like -- accompanied by silly cartoon music: If only Moore could recognize that his showboating doesn't enhance his message; it only gets in the way. Toward the end of "Sicko," Moore tells us that the fellow who runs the most successful anti-Michael Moore Web site nearly lost everything when his wife became seriously ill and he found himself overwhelmed by medical bills. Anonymously, Moore sent him a check for $12,000. Good for Moore (and for that couple who needed it). But by choosing to include the story, Moore slyly gets to be both the anonymous good Samaritan and tell us about his -- you should pardon the expression -- largesse.

Still -- and I say this as one of the critics in the country to have expressed a vehement dislike for and distrust of "Fahrenheit 9/11" despite sympathizing with its politics -- there's plenty to admire and respect in "Sicko." Moore's sense of outrage here feels genuine and potent, and he seems to know he doesn't have to work too hard to rile us up: There's something desperately wrong with a nation whose healthcare system -- there's that word, "system," again -- exists not to keep people well and healthy but to make a profit off them. Moore gives us the facts and figures and lets them speak for themselves. Even he realizes there's no need to shout about them.

But "Sicko" is still marred by Moore's insistence on drawing simple-minded, facile connections. He asserts that the mess we're in is the fault of Richard Nixon, since HMOs, beginning with the Kaiser Permanente program, came into being under his watch: "Sicko" includes an admittedly creepy tape of a 1971 discussion between Nixon and John Ehrlichman in which Ehrlichman tries to sell the merits of the new system, stating -- or, rather, stammering -- "All the incentives are toward less medical care, because -- the less care they give them, the more money they make."

Personally, as a child of the Watergate era, I'd be very happy to blame Richard Nixon for every ill that has befallen this country since 1969. But the healthcare problems we face today didn't begin in 1971, when Nixon proposed a new (and, we know now, incredibly damaging) national health strategy. Moore includes early '60s clips of American housewives listening to a recording made by Ronald Reagan, warning Americans of the dangers of "socialized medicine." And from the same period he shows a speech made by an AMA official declaiming against Medicare. The mess we're in now is so big, it took more than Nixon to build it.

And the refreshing straightforwardness of "Sicko" turns into something wobblier when Moore takes his camera into other countries. He details the plight of a young single mom who sneaks into Canada -- she has a friend there who vouches for her as a partner -- to get the treatment she can't afford in the States. He takes his camera into U.K. hospitals, querying people in waiting rooms to find out how much healthcare costs them. "Nothing -- totally free," they report cheerily. In France -- which, according to the World Health Organization, offers the best healthcare in the world -- he talks to a table full of U.S. citizens living and working there, as they sing the praises of a system under which they get wonderful free healthcare. (He never explains how they managed to luck into such enviable circumstances. Do some of them work for deep-pocketed American companies? We never find out.) And in the movie's nutty capper, Moore travels with a number of Americans (including some 9/11 rescue volunteers with serious health problems) by boat to Cuba, where, via a somewhat circuitous route, he manages to secure free healthcare for them. The point -- not a wholly negligible one -- is that even in this exceedingly poor country, all citizens can get the healthcare they need. (In what can only be seen as a purely vindictive political move, the government is investigating Moore for violating the trade embargo against Cuba. Even scummier, the 9/11 rescue workers face fines of $65,000 each if they're found in violation.)

But Moore approaches these systems -- all of which present their own challenges for their respective governments, particularly in Canada and the U.K. -- as if they were Utopian ideals. He's the plaintive American with his nose pressed against the window of the candy shop: "If they can have it, why can't we?" The irrefutable reality is that we should have it; but to suggest that universal, government-provided healthcare doesn't come with a price, for any of these countries, only denigrates what they have achieved. Britain's National Health Service -- which, at its inception in the mid-1940s, was hailed as a model system, and by all accounts, really was -- was savaged by Margaret Thatcher; Tony Blair has attempted to restore it, but the damage Thatcher did by introducing privatization hasn't been easy to undo.

Similarly, the Canadian healthcare system is rife with problems -- which isn't to say that its system, or Great Britain's, isn't infinitely better than what we Americans have. At least these countries are able to serve, on some base level, every single citizen. And even though Moore says nothing about poverty in Canada, the U.K. or France, mentioning it would only have strengthened his case. After all, if you're out of work or struggling to make ends meet, it helps when healthcare isn't something you have to worry about. He does at least make the case that you can have a national health system without taxing people to death.

Even so, Moore is more interested in the dream version of national healthcare than in any imperfect, achievable one. He also doesn't seem particularly interested in the history of the programs he's praising. Moore spends a great deal of time talking to a Canadian citizen who repeatedly extols a Canadian hero named Tommy Douglas -- but Moore never bothers to explain who Douglas was: a Baptist preacher who entered politics during the Depression because he felt he could do more good that way. In the early 1960s, Douglas, then the premier of Saskatchewan, introduced government-funded medical care in that province. It was so overwhelmingly popular that the government instated it nationwide.

Who cares about Tommy Douglas, you may ask? We Americans just want free drugs, free doctors visits, free surgery. We don't want our children to die needlessly; we want cancer treatment in time to save our lives. How we get those things isn't our concern.

But it is. With "Sicko," Moore sheds some much-needed light on one of the most important domestic issues our country faces today. He shows, rightly, how our current system runs counter to everything we believe in -- or ought to believe in -- as Americans. After all, as Moore points out, in Cuba, even visiting Americans can get free, cheerful healthcare. (At least when the cameras are rolling. And let's forget, for a moment, that this is also a country that imprisons poets and homosexuals.)

But by painting other countries' healthcare systems in such a glowing light, is Moore inadvertently setting up expectations that we could never hope to meet at home? Many of the 2008 candidates are offering plans for universal healthcare -- including all the Democratic front-runners -- and in all likelihood, none will be perfect, foolproof solutions. Could Moore's failure to grapple with certain political realities actually hinder, rather than further, the goal of instituting some sort of national healthcare? Hillary Clinton's healthcare initiative was undone partially by her own idealism: Given the chance to settle for a system that would have been an improvement on the one we've got, she held out for perfection -- and lost everything. Moore's showing happy Britons in hospital waiting rooms isn't going to be enough to change anything at home. But at the very least, he's raised a warning flag that shouldn't be ignored.