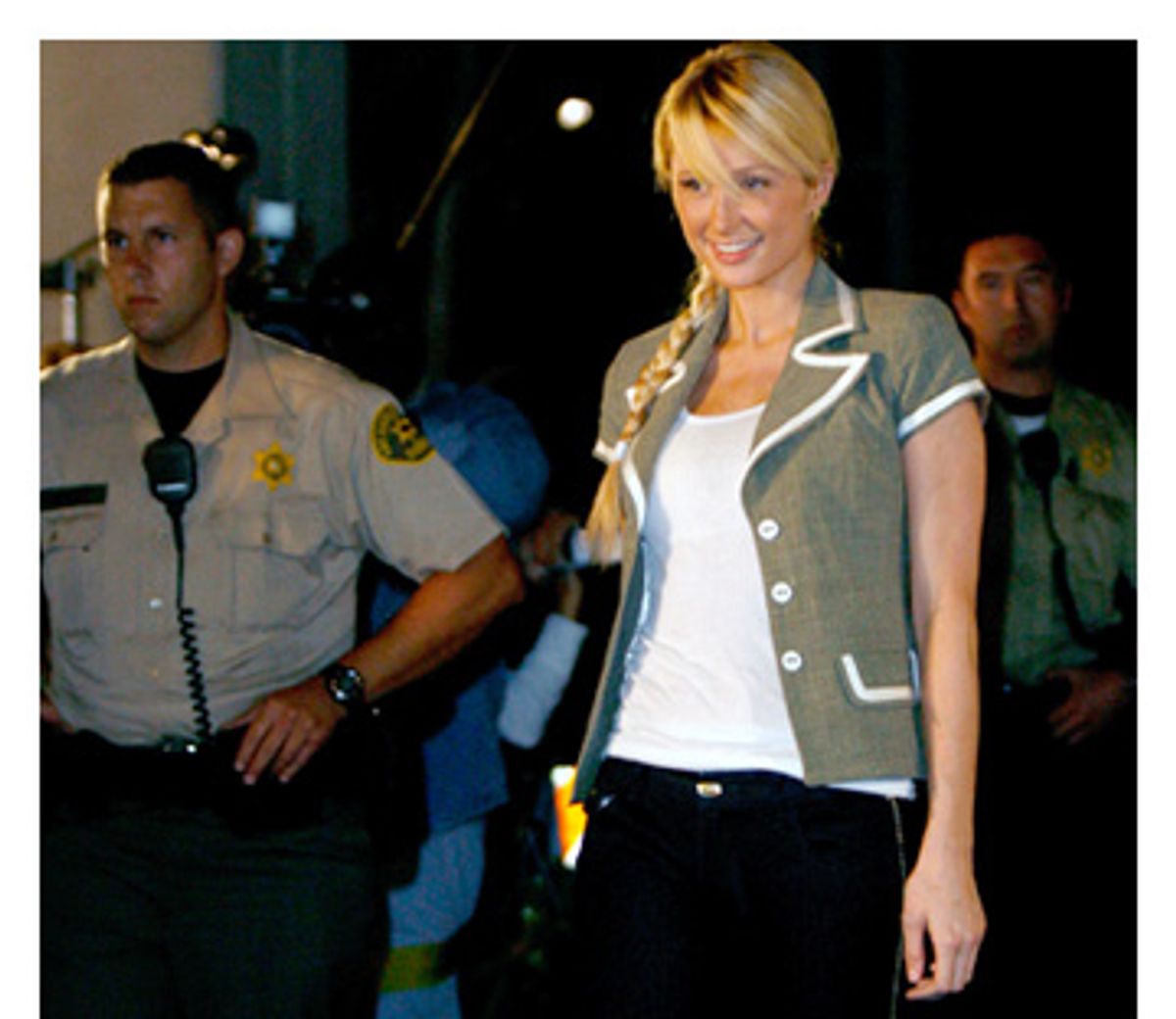 "I hope she's not crying," Nick Ut says. "I want pictures of a happy lady. I feel very sorry for her." It's night and we're waiting for Paris Hilton to get out of jail. The journalists are flanked along the walkway leading from the main entrance, kept back by yellow tape. Nick was 15 years old when he started taking pictures for the Associated Press. His brother had been killed in the Mekong Delta while shooting for the AP and Nick took his place.

In 1972 Nick took a picture of a 9-year-old girl named Kim. She was naked, running with her arms spread, 80 percent of her body burned by napalm. The picture won the Pulitzer Prize and hastened the end of an unnecessary war. Thirty-five years later to the day, he took a picture of Paris Hilton crying in a police car, returning to jail. "You look at the pictures," he says, "they're very similar. Her hair falls over her brow, both crying, open mouth. Also different. Kim was very poor, 80 percent of her body burned by napalm. Paris was in jail for three days."

Nick speaks with Kim on the phone every week. Kim now works as a goodwill ambassador to the United Nations.

There are hundreds of journalists here. And tourists arriving. I meet Ashley Moore, who spent seven days in the jail back in September. She's pretty, a business student at Cerritos College. She couldn't make bail so she stayed in jail for a week. After she was released the judge dropped the case. She has the Japanese symbol for beautiful on her arm, a rose tattooed on her foot. "That place," she says, pointing to the jail, "is no place to be." But here she is, waiting to see Paris get out. She says she has nothing else to do on a Monday night.

I wait inside the jail with Pablo. His girlfriend spent the weekend here. She attacked Pablo. His arm is all bruised and cut. After she attacked him she called the police but they arrested her. He has been waiting three hours. When the sheriff's spokesman sees me with Pablo he says, "Get out of here. You're with the media."

As it gets closer to midnight the crowd swells. The TV reporters report live. Helicopters hover overhead. The parents pull up in a large black SUV. They have a driver and a bodyguard and the bodyguard seems to know the police well. He's a big, bald man in a well-tailored suit. He looks like he could have been a football player once. The driver is dark and serious. More tape is stretched, to keep in the crowd. The thrum of the helicopters is like a soundtrack.

"You're so beautiful, Kathy," a girl cries from the crowd. The girl looks Spanish or Asian, or both. She's wearing a tank top, her breasts pushed up.

"Thank you," Kathy Hilton says. Kathy sits in the car waiting, the window rolled down, bantering with the press. She likes the attention. She plays with her hair.

Then the girl says it again, "You're so beautiful, Kathy."

Then the girl says it again and Kathy looks ahead uncomfortably.

"Oh God, please let Paris go free!" a deranged man wails. We are in East Los Angeles near the Imperial Highway, an otherwise forgotten place, an area of Los Angeles frequently referred to as a wasteland.

There are arc lights set up. Lights of all kinds. It's midnight and everything is bright. The reporters lean over the tape. The paparazzi wait with their cameras strapped over their necks. It has been two weeks since "The Sopranos" ended. Phil Spector is on trial for murder but nobody notices. The newspapers have been filled with reports that Paris served more time than 80 percent of people accused of similar crimes. They fail to take into account that Paris was pulled over three times. That she was swerving. That she had a signed statement saying she knew she was not allowed to drive. That she failed to show up to mandatory classes. The judges have discretion in these cases for a reason. Paris had flagrantly flouted the law. Several days ago she called Barbara Walters at 2 in the morning, 11 at night West Coast time. Nobody seems to think that's strange. A call to Barbara Walters at 11 at night from a prison cell.

The jail holds 2,200 people. It is full to capacity. There are only eight medical beds. Paris has occupied one of them almost the entire time.

And then she is out. Paris Hilton in tight jeans and a light jacket thrown over a white shirt. She's smiling, basking in the glow of the cameras. She looks better without makeup. She gets to the car and she is hugging her mother and then the door is open and she is inside and the tape and the barricades go down and the police cannot control the crowd. The car is trying to move, inching away. The paparazzi stand in front of the car taking pictures. Unafraid. Nick Ut stands back in the wreckage of toppled tripods, reviewing the pictures he took. He's a little man, and this is not exactly his game. But Paris was smiling and happy, exactly as he had hoped.

The police have blocked the parking lot, so we can't get out. Finally, I'm on the highway again. It's 1 in the morning and I feel strangely alive. I see the helicopters above the 110, shining their giant lights like tractor beams and I drive toward them.

I met a man from Stopparishilton.com. He said they were working with Al Sharpton. Sharpton had called for a boycott of all things Paris. Sharpton, who once accused Jesse Jackson of smearing himself with Martin Luther King's blood. Sharpton, who insisted in staying in $500-a-night hotel rooms during his meaningless presidential campaign. Tawana Brawley Sharpton. Sharpton is not the man to deliver us from Paris.

There are more than 50 people waiting at the gates of Paris' home on the hill above the Chateau Marmont. The streets have been made temporary tow zones but nobody seems to care. They are paparazzi and mainstream media and citizens of celebrity-obsessed West Hollywood. It's almost 2 in the morning. It's all very American, just magnified. But Paris isn't coming home tonight and so I go back to my friend's house in Little Armenia, where I've been sleeping on the couch.

Originally I thought this was a good thing, Paris' incarceration. It would bring attention to prison crowding, a corrupt sheriff, a justice system that works differently for the rich and the poor. And it did. But it's not really what this was all about. In the new age we all know how famous we are. How many MySpace friends do you have? How many people read your blog? How many download your video from YouTube? We can be famous now without doing anything, and Paris has done that better than anyone else. We don't burn down the houses of the rich because we want to be rich. And we shudder and complain about the attention Paris Hilton gets but we talk about her just the same, sometimes in quiet and disparaging tones. We talk about her more than we talk about Iraq and often we talk about how we talk about Paris Hilton when we should be talking about the war in Iraq.