How Bush hardliners and even mainstream pundits have hogtied one of our greatest potential strengths in the war on terrorism. 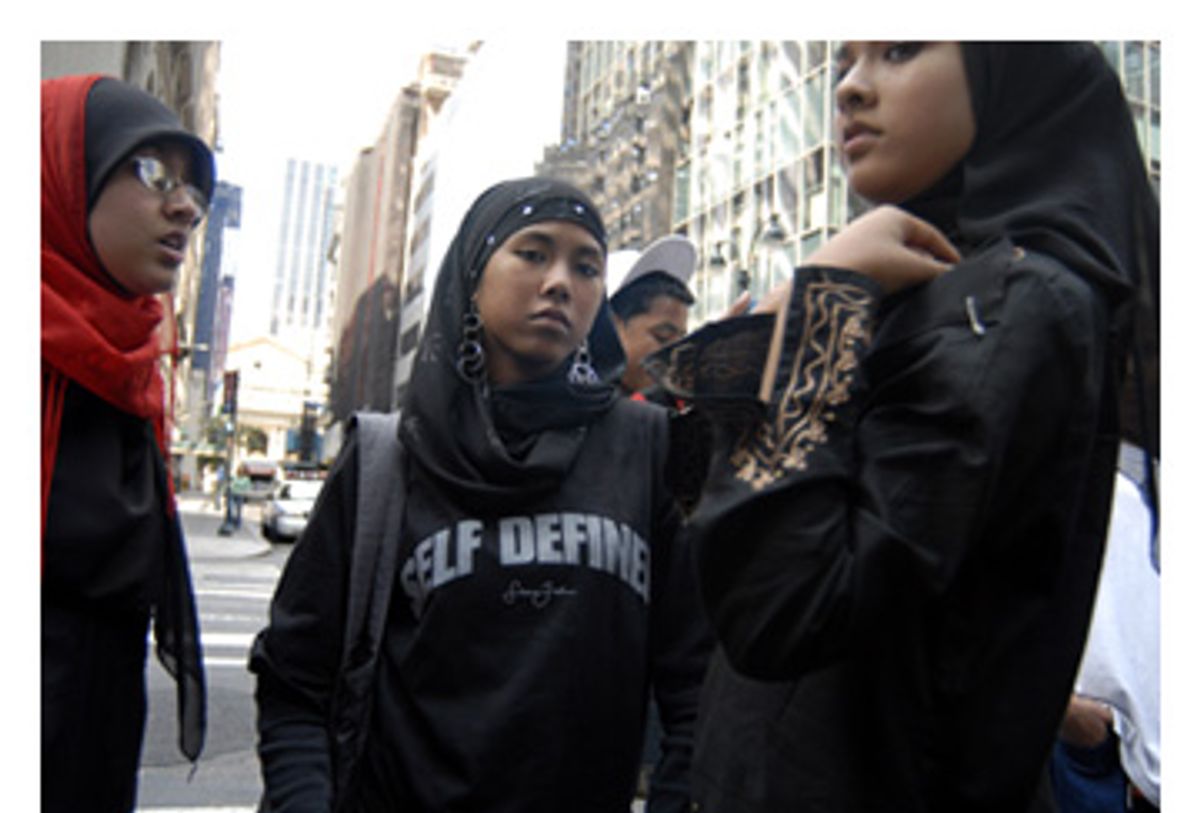 Winning the war on terrorism depends on winning the war of ideas, perhaps even more so than during the Cold War. General David Petraeus, currently the top commander in Iraq, once said that the war of ideas may be as much as 80 percent of the effort against extremists. Unfortunately, by most metrics, the United States is losing this war, in Iraq and beyond. In a few short years, the United States has gone from being seen as the Cold War beacon on the hill of freedom, Coca-Cola and blue jeans to the dark home of Abu Ghraib, Guantanamo Bay and orange jumpsuits. Part and parcel of this failure has been a rising xenophobia and prejudice at home, undermining our efforts abroad.

This war of ideas has been raised by almost all of the 2008 presidential campaigns. They have rightly discussed revitalizing our public diplomacy and making changes in foreign and security policies to restore American values. There even appears to be growing momentum inside the Bush administration to close down Guantanamo, though the debate is focused on legal issues in the wake of a Supreme Court ruling last year, rather than on the prison's undeniable corrosion of American prestige.

But there is a critical aspect of this debate that no current presidential contender has faced. While leaders like Eisenhower, JFK, LBJ and even Nixon saw that we would never defeat the Soviet bloc in the Cold War battle of ideologies until we openly wrestled our deep problems with racism and civil rights at home, no candidate yet has wrestled with that period's 21st-century parallel. Just as it was hard to win hearts and minds in the Cold War battlegrounds of Africa and Asia as long as Jim Crow stood strong, it'll be impossible to win hearts and minds in the Muslim world as long as a vapid prejudice against Islam continues to grow in our political discourse and on our airwaves.

The deep and rapid deterioration of America's standing in the world is one of the greatest challenges the United States now faces. It took us most of the 20th century to build up a global reputation that melded both power and popularity, and yet we are squandering it away in the first years of the 21st century. The erosion of American credibility and standing in the world is not just some lost popularity contest. It alienates our allies and reinforces the recruiting efforts of our foes, and denies American ideas and policies a fair shake.

Shortly after 9/11, President Bush took the compelling step of visiting the Islamic Center of Washington, the capital's leading mosque, to show Americans and the world that the administration understood that the world's roughly 1.4 billion members of the Muslim faith were not to blame for the attacks carried out by a small set of murderers like bin Laden. This week, he goes back to the center for its rededication ceremony.

Unfortunately, in the time between, the clarity of his message has been lost amid a politics of fear -- a new sort of xenophobia, targeting the entire religion of Islam, as opposed to extremists within it, has become the norm. For example, a series of broad anti-Muslim statements have since been made by various U.S. officials and their close supporters, calling the religion of Islam "violent" and "evil." Rather than being refuted and condemned by senior officials, they were politely ignored. Illustrating the lack of costs that come with such expressions is the story of Lt. Gen. William G. Boykin, who in a 2003 speech compared his faith with a Muslim's by stating, "I knew that my God was bigger than his. I knew that my God was a real God and his was an idol." Boykin has since been promoted; today he is deputy undersecretary of defense for intelligence.

This quietly growing prejudice is not a right-left issue. Indeed, Michael Franc, vice president of government relations for the conservative Heritage Foundation, has warned of the dangers of "a real backlash against Islam" in the United States, noting that congressional leaders are exacerbating the problem by using language that links all Muslims with extremists.

Such discourse isn't only becoming acceptable in the political world, but is also being stoked in the mainstream of our media as well. For example, in 2005, Simon & Schuster published a book called "Sands of Empire," by former Wall Street Journal correspondent Robert W. Merry. It was reviewed by all the major media. In it, Merry straightforwardly argued that "the enemy is Islam." Imagine if he had declared that "the enemy is Judaism" or "the enemy is the Blacks." Would it even have gotten published by a mainstream press, let alone promoted? Moreover, was he saying anything different than what you would hear on just five minutes of talk radio?

Today, a new prejudice undermines our national security, just as Jim Crow and images of police setting dogs upon civil rights protestors undermined our message of freedom some 40 years ago. At the heart of any discussion of the 21st-century war of ideas must be what former U.S. diplomat William Fisher recently warned of as an "uninformed and unreasoning Islamophobia that is rapidly become implanted in our national genetics." Indeed, a Gallup poll in 2006 found that only 49 percent of Americans believed U.S. Muslims are loyal to the United States and 44 percent believed that the entire religion of Islam itself is inherently extreme. Interestingly, six months after 9/11, the numbers were much lower -- meaning that people had less prejudice back then, even while the pain was raw, than they do today. Likewise, in the 2006 poll, 39 percent advocated that all Muslims in the United States be required to carry a special ID.

We need to remember that we live in an increasingly media-connected world, and demonstrations of prejudice at home resonate globally. Last year, the Brookings Institution (where I am a senior fellow), the Pew Forum and American University sponsored a student research team that went to nine countries and surveyed Muslim youth attitudes, drawing from more than 2,000 interviews. Whether it was in Turkey or Indonesia, the study found a consensus about how youth in the Muslim world -- our key target audience in this war of ideas -- think America regards them and their faith.

As one student researcher described of the interview results, "They think Americans just don't care and think all Muslims are evil or terrorists. They say, 'We get your media and see how you view Islam.'" Added another, "Wherever the group traveled, Fox News was on, and you'd see Ann Coulter calling people 'ragheads' over and over, or Glenn Beck on CNN."

Beck is the same cable news "personality" who in a television interview asked Keith Ellison, the first Muslim to serve in Congress, "Sir, prove to me that you are not working with our enemies." Ellison equally was welcomed to the House of Representatives by Rep. Virgil Goode, a Republican from Virginia, who warned his constituents that Ellison's decision to use the Quran for his swearing-in was a threat to "the values and beliefs traditional to the United States of America."

Ellison illustrated the flaw in that sort of thinking by swearing his oath of office on a copy of the Quran that was originally owned by Thomas Jefferson. But the damage was done. While the attack on his patriotism echoed the same sort of questions about personal faith that plagued leaders like JFK and now Mitt Romney, it extends beyond mere electoral politics. What should have been a story to the Muslim world about the greatness and inclusiveness of American democracy instead became an illustration of how prejudice against Islam has become allowable in American discourse.

The saddest irony in all of this is that this trend is turning what should be our greatest strength into a weakness. The success of the Muslim and Arab-American communities is a remarkable demonstration of the opportunities afforded by the United States of America. The average income and education levels among Muslim and Arab Americans are higher than the national rates, a fact we should be announcing with fanfare in our public diplomacy -- that is, if we had any. This is definitive proof that the United States is not anti-Islam, something that violent extremists like bin Laden often accuse us of being in their propaganda.

America provides a model of what citizenship and integration are all about, presenting an example that shines brightly compared with the autocratic regimes of the greater Middle East. The same is true with regard to the substandard treatment that many Muslims and Arabs face in Europe, which may be the future hub of homegrown terrorism. That America has a history of being the beacon on the hill is not merely something we should be proud of; its use is a strategic imperative. Yet we seem to be on a path to repeating the worst of our periods of prejudice of the 1960s, or even the 1940s.

We all know that hatemongering is un-American. But even more worrisome, it undermines our national security, endangering our ability to win the crucial war of ideas. Those wishing to become the next president must be asked how they will reverse this perilous trend.

Peter Warren Singer is senior fellow and director of the 21st Century Defense Initiative at the Brookings Institution. He is the author of the upcoming book "Wired for War" (Houghton Mifflin, 2008).