Age catches up to Bruce Willis' everyman hero, and it makes him all the more appealing. 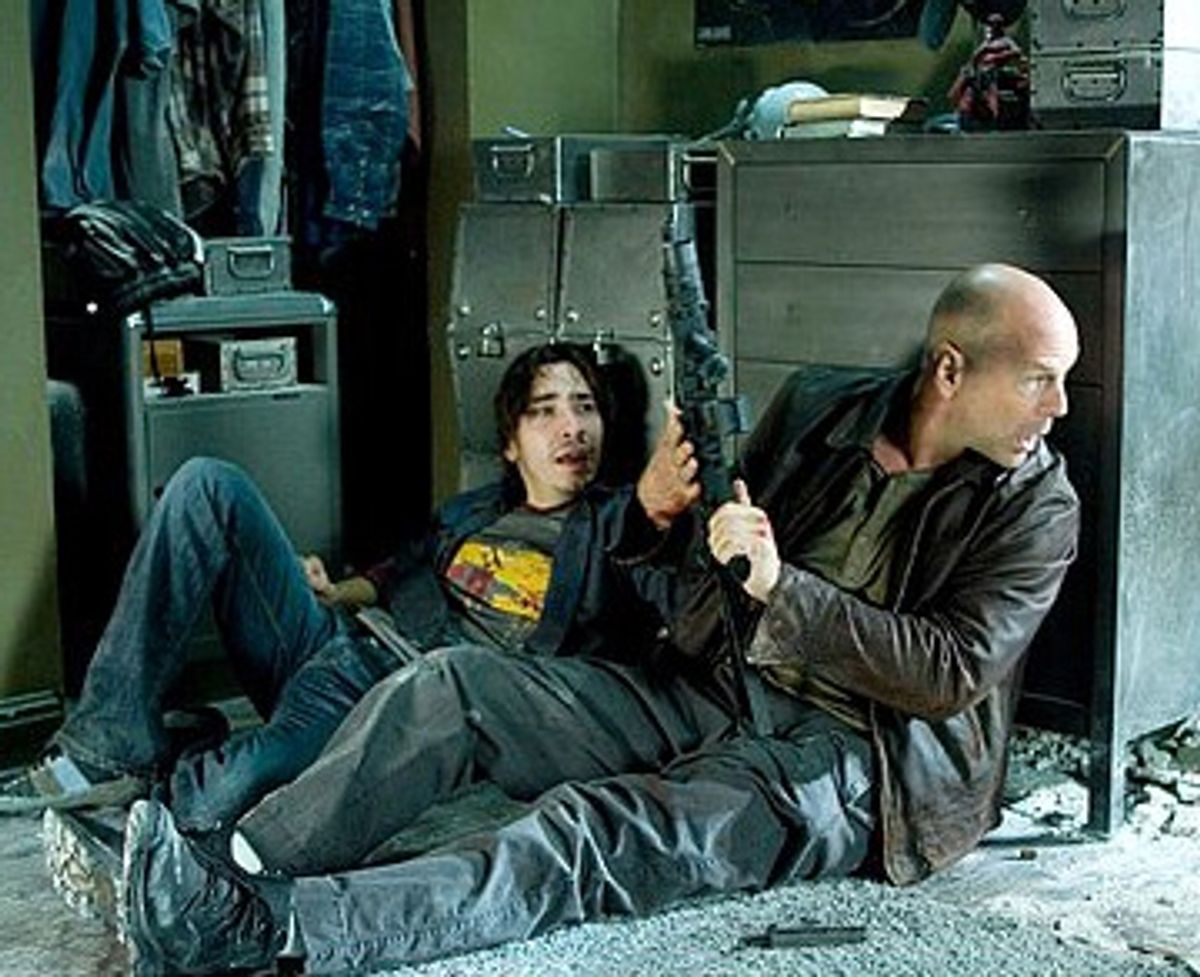 To watch Bruce Willis in "Live Free or Die Hard," the fourth "Die Hard" movie since the franchise began, in 1988, is to feel, with an "ouch," the creeping certainty of our own mortality. Willis, now nearing his mid-50s, is what we might politely call an aging actor, although that's a misnomer anyway, since who among us, other than maybe Catherine Deneuve, is getting any younger?

In "Live Free or Die Hard," a picture heavy on old-fashioned stunts and relatively low on CGI trickery, Willis' character, the indestructible yet comfortingly vulnerable John McClane, has the jujitsu kicked out of him by a svelte villainess; drives cars into places they shouldn't be driven, resulting in smash-ups that cut and bruise the bejesus out of him; and is variously flung, dragged, kicked and punched, in numerous combinations and permutations, like a discarded Raggedy Andy. That McClane always bounces, or at least stumbles, back doesn't lessen the impact. The central idea in "Live Free or Die Hard" -- a modern, summer-blockbuster-scaled echo of what we see in Sam Peckinpah's "The Wild Bunch" or in later John Wayne westerns -- is that McClane is an older guy in a young person's game, and every bump, bang and gash hurts a little more. Part of the fun of Willis' performance in "Live Free or Die Hard" is its unremitting, if grimacing, optimism in the face of the inevitable: that time's winged chariot is eventually gonna bust your ass.

There isn't much of a plot to "Live Free or Die Hard," which was directed by Len Wiseman (of "Underworld" and "Underworld: Evolution" fame) and written by Mark Bomback: Like so many contemporary action pictures, it's mostly a series of situations strung together, manufactured occasions for car chases, butt kickings, and florid explosions. (That's not something you could say of the first "Die Hard," a picture with a beaten, bloodied, bitterly funny soul, which may be part of the reason the picture is beloved even by people who claim not to care much for action movies.) In "Live Free or Die Hard," his-and-hers tech-genius baddies Thomas Gabriel and Mai Linh (played, respectively, by Timothy Olyphant, of "Deadwood," and Maggie Q, who appeared in last year's "Mission: Impossible III") launch a virtual attack on the United States, bringing down the system by bringing down every system. (Their proudest moment is a guerrilla Fourth of July TV broadcast consisting of snippets of speeches made by various American presidents, from Kennedy to LBJ to Nixon to both Bushes, cut and pasted into nonsensical wisdom designed to strike fear in the hearts of the nation's citizens. Though you could argue that any recent State of the Union address has had pretty much the same effect.)

Once the FBI honchos realize what's happening, they try to round up every top hacker they can think of, only to discover they've all been neatly, or not-so-neatly, disposed of by the evildoers. But there does happen to be one left: Nerdy-cute geek Matt Farrell (Justin Long, who starred in last summer's slacker comedy "Accepted," but who may be better known from the Apple TV ads in which he regularly appears). Willis' McClane is dispatched to Farrell's Camden, N.J., crash pad and ordered to bring him down to Washington, pronto. It's a routine assignment that McClane, weary from the troubles he's having with his estranged family, balks at.

Dutifully, though, he pops in on Farrell and, after breaking one of the poor kid's collectible sci-fi-fantasy figures, hauls him off to the nation's capital. In typical buddy-movie (or romantic-comedy) fashion, the two can't stand each other at first. But as they realize the danger the country's in -- and as they're increasingly roughed up by the chaos around them, even acquiring matching bloodied ears -- they forge all the necessary bonds.

"Live Free or Die Hard" is the sort of movie that might evaporate into nothing the week, or the day, after you've seen it. But on a base level, it offers all the immediate pleasures you want out of a noisy summer blockbuster: The action sequences are heavy on real-life stunts (including some nifty ones by French action star Cyril Raffaelli, who appeared in the dazzling "District B13"); the explosions and crashes are vivid and loud. The dialogue, peppered with the requisite "Die Hard" in-jokes, is good when it's breezy and casual: When Farrell worries that McClane has been hurt and might need a doctor, McClane waves him off, limping, and says with a shrug, "It's sexy, man." Elsewhere -- as when McClane confesses to Farrell the difficulties inherent in his job, most notably the way it has alienated him from his now-grown daughter, Lucy (Mary Elizabeth Winstead, the "cheerleader" in Quentin Tarantino's "Death Proof," the second half of the Tarantino/Robert Rodriguez double feature "Grindhouse") -- the picture barely pokes along.

Still, both Long and Willis do what it takes to keep the thing chugging: Long struck me as dopey at first, but he grew on me as his shy goofiness began to feel more like a performance and less like a put-on. And while Willis has given some terrific performances in the past few years -- often in pictures few people have paid much attention to, like the marvelously well-acted "16 Blocks," co-starring Mos Def -- this time, he appears to be not so much giving a performance as settling, once again, into a comfortable, well-worn-in role. And that's perfectly OK. Wary of authority, principled, more than willing to take a few hard knocks, Willis' John McClane, with that sly, sideways smile, is like an old acquaintance you don't mind running into. He may be older and balder, but he's none the worse for the wear. And he can still take a punch.