Surging toward disaster in Iraq 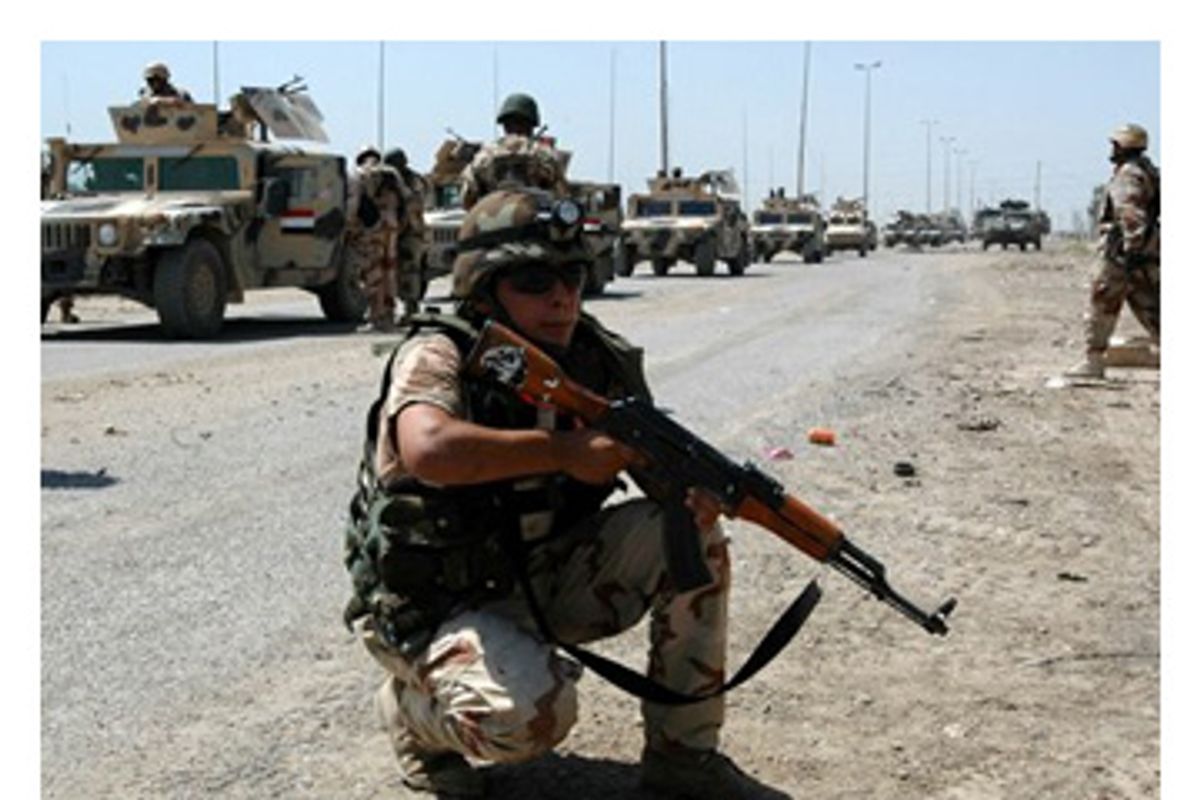 Earlier this week Sen. Richard Lugar, the senior Republican from Indiana, dismissed the U.S. "surge" in Iraq as unlikely to succeed. He condemned any illusions about staying the course. "We have overestimated what the military can achieve, we have set goals that are unrealistic, and we have inadequately factored in the broader regional consequences of our actions," Lugar said from the Senate floor.

His alarm has been illustrated by the difficulties the U.S. and Iraqi militaries faced in the recent offensive operation dubbed "Operation Arrowhead Ripper," aimed at subduing Baquba (pop. 300,000), the restive capital of Diyala province, located 31 miles northeast of Baghdad. American generals admitted that 80 percent of the guerrilla leadership there had slipped away, and that the Iraqi army lacked the equipment and training to hold areas taken in difficult hand-to-hand fighting. The U.S. military compounded its public-relations problem by implausibly branding virtually everyone it fought or killed in the Sunni-majority city as "al-Qaida."

The failure of the offensive casts doubt not only on its purpose of securing swaths of territory, but also on the way the strategy has been sold to the American public. The Baquba push involves some 6,000 U.S. troops and 4,000 Iraqi ones. Despite the "white hats vs. black hats" imagery deployed by U.S. spokespersons, and the castigation of the enemy under the "al-Qaida" rubric, the operation clearly committed the United States to one side in a civil war. The Iraqi 5th Army, which is largely Shiite, was supported by special police commandos from the Ministry of the Interior, a Shiite force mostly drawn from the Badr Corps paramilitary of the Supreme Islamic Iraqi Council -- which was trained by the Iranian Revolutionary Guard Corps. In practical terms, the U.S. military was helping a Shiite government and a Shiite security force impose itself on a majority Sunni population.

Ironically, the opposition now labeled "al-Qaida" is in reality a mix of enraged local Sunni tribes and Baathist "dead-enders," of which the Bush administration once spoke as being the predominant threat in Iraq. These Sunni Arabs had for the most part belonged to the Baath Party, and many had served in the Iraqi army, which fought the Iranians from 1980 to 1988. More recently, some have turned to Sunni fundamentalism. It is a bitter pill for them to swallow that they are now ruled by Shiites, who are a minority in Diyala province. The only time provincial elections have been held in Iraq, in January 2005, the Sunni Arabs boycotted them, allowing Shiite religious parties to take over the provincial and most municipal administrations. The police in Baquba have therefore been disproportionately Shiite, and Shiite militias such as the Badr Corps and the Mahdi Army have a strong presence.

In mid-May, the Iraqi government relieved the 5th Army commander in Baquba, Brig. Gen. Shakir Hulail Hussein al-Kaabi, of his command. The U.S. military suspected him of seeking Shiite dominance in the mixed Diyala province, and of lending surreptitious support to Shiite militias and death squads while conducting punitive campaigns of his own against Sunni Arabs. After months of pressure from U.S. generals, the Shiite government of Prime Minister Nouri al-Maliki finally relented.

The self-styled "Islamic State in Iraq," a fundamentalist Sunni group that hived off from the late Abu Musab al-Zarqawi and is often referred to in Iraq as "al-Qaida," allegedly controlled some Diyala cities and some neighborhoods of Baquba. There is reason to question the group's identification with al-Qaida, since its members are unlikely to have received instructions from the reclusive Osama bin Laden, nor is there good evidence they have pledged fealty to him. "Al-Qaida" here is shorthand for adherents of the Salafi Jihadi strain of Sunni radicalism. The Islamic State in Iraq issued a statement on the Internet on Monday, which was translated by the Open Source Center of the U.S. government. It boasted, "This is the fifth day that the Crusaders are suffering significantly in human and material losses. Soldiers of the Islamic State, may God protect them and their men, are spread out and stationed everywhere, at all entrances and exits of the areas leading to Al-Katun, Al-Mu'alimin, Al-Mafriq, and other areas and regions in Diyala Province."

The statement attacked Iraqi allies of the U.S. military, including the Shiite Mahdi Army of the young cleric Muqtada al-Sadr, and the Badr Brigades (which it stigmatized as the "Safavid Brigades," a way of smearing Badr as a mere cat's paw of Iran), declaring them defeated. It also targeted Sunni tribal militias loyal to Iraqi Vice President Tariq al-Hashimi, an indication of how sectarian fault lines in Iraq have been blurred. The group declared in its statement, "The strongest kinds of explosives are awaiting them on the streets and in the alleys. Snipers of the Islamic State of Iraq are going ahead hunting down dozens of soldiers. They are in control of the high-rise buildings, and ambushes and traps are awaiting them everywhere."

Other Sunni fundamentalist groups alleged to be fighting U.S. and the Iraqi army forces in Diyala province allegedly include the Ansar al-Sunnah Group, the Al-Mujahidin Army (Al-Jihad and Reformation Front) and the Monotheists' Army. Lumping all of these groups together with the "Islamic State of Iraq" as "al-Qaida" obviously does not reflect the complexity of the situation. It should also be noted that Baathist cells are also active in this area, but prefer not to advertise themselves on the Internet in the way that the fundamentalists do. Nevertheless, U.S. military spokesmen and journalists have tended to brand all the fighters as "al-Qaida," when in reality most of them are neighborhood Sunni young men with guns. There are dissenters from the hardliners, as well as some rival fundamentalist groups, such as the 1920 Revolution Brigades, and there has been Sunni-on-Sunni violence.

American errors have given the Islamic State in Iraq propaganda victories. On the first day of the operation, the BBC reported that the United States had killed 12 civilians, including three women. Late last week, a U.S. air strike targeting a guerrilla safe house went awry when instead a residence was bombed, wounding 11 innocent civilians.

Given that the leadership of the Sunni Arab guerrilla movement in Baquba and other nearby cities has eluded capture, and given that Sunni neighborhoods there will continue to chafe under Shiite rule, Operation Arrowhead Ripper is unlikely to achieve its goals of securing territory. According to recent reports, fleeing guerrillas were burying their munitions in expectation of returning to retrieve them in a few months, after American forces will have left.

This Sunni-Shiite faction fighting is among the intractable problems that impelled Lugar to speak out this week. The senator has, throughout a long and distinguished career, looked history in the eye and coolly decided what the United States could reasonably hope to accomplish. He convinced President Ronald Reagan that supporting Philippine dictator Ferdinand Marcos in the face of Corazon Aquino's "people power" movement in the 1980s would be a fruitless and dangerous strategy for Washington. Now, he says with regard to Iraq, "I see no convincing evidence that Iraqis will make the compromises necessary to solidify a functioning government and society, even if we reduce violence to a point that allows for some political and economic normalcy." Certainly, peaceful coexistence across sectarian lines in the Diyala province seems a goal unlikely to be achieved in the near or medium term.

Lugar also worries that the long and repeated deployments to Iraq are damaging U.S. military preparedness, and that the 2008 elections make it unlikely that the troop levels used for the surge can be maintained. Clearly he fears that Bush will push his military operations in Iraq as a panacea for the rest of his term in office -- and that Bush's successor will be pressured into a hasty and poorly thought-out withdrawal from Iraq. Lugar reasons that the United States is so dependent on Middle Eastern petroleum that such a scramble to exit may well imperil its energy security.

Only by adopting a more realistic policy in Iraq immediately, Lugar argues, can the Bush administration potentially avoid an American rout two years down the road. Games of Whack-a-Mole like those being played in Diyala province at present are highly unlikely to deliver a decisive victory to the U.S. military or to its Iraqi allies. Bush may see himself as making a noble last stand, but Lugar looks at the president and sees Custer at Little Bighorn. And the senior senator's defection from the White House camp over the war signals a turning point in Republican support for the beleaguered president.