With his poll numbers sinking, Giuliani is blaming Bill Clinton for doing nothing about Islamic terrorists. But what did the former mayor do? 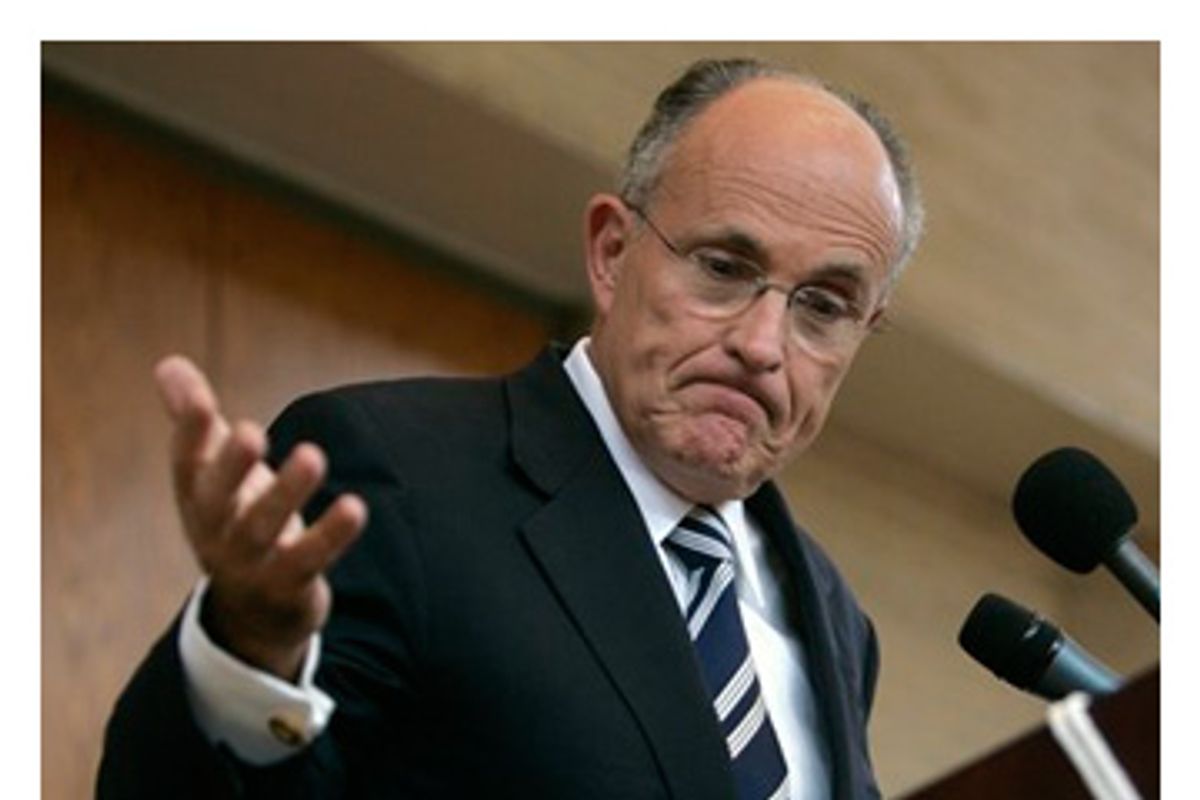 Rudolph Giuliani probably possesses many fine attributes, but originality isn't one of them. Stung by the revelation that James Baker III had essentially booted him off the Iraq Study Group because the New York mayor was too busy giving lucrative speeches to bother attending the group's sessions, he deployed a familiar Republican diversion.

With Giuliani's poll numbers declining and his front-runner status threatened by former Sen. Fred Thompson, he can't be blamed for wanting to change the subject, and his preferred topic is always 9/11, which allows him to remind everyone of his finest hour and to pose as the nation's potential savior in 2008. Speaking at Pat Robertson's Regent University June 26 -- where he also continued his servile pandering to the religious right -- Giuliani accused the former president of failing to confront the threat from Islamist terrorism, dating all the way back to the first bombing of the World Trade Center in February 1993.

"Islamic terrorists killed more than 500 Americans before Sept. 11," he intoned. "Many people think the first attack on America was on Sept. 11, 2001. It was not. It was in 1993 ... The United States government, then President Clinton, did not respond. Bin Laden declared war on us, [but] we didn't hear it." He went on to accuse all of the Democratic presidential candidates of being "in denial" about terrorism and wanting to "put the country in reverse to the 1990s." Democrats, he warned, "can't face this threat. They couldn't in the 1990s."

Now that belligerently partisan speech struck some reporters as a big contrast with remarks Giuliani made last September, when he piously urged everyone to refrain from blaming either Bill Clinton or George W. Bush for the 9/11 attacks. But as close observers of the former mayor can attest, what he really meant was that nobody else should place blame for 9/11 on Clinton. He reserved that privilege for himself, since he is, according to his own description, the man who knows more about the threat of terrorism than anyone else.

But let's forget Giuliani's hypocrisy and arrogance for a moment and simply dissect this specimen of demagogy lie by lie. It's a useful exercise, because we are sure to hear much more of the same from him before this campaign is over.

What does Giuliani mean when he says that President Clinton "did not respond" to the first bombing of the World Trade Center? At the time, there was no evidence linking Osama bin Laden, then still a fairly obscure Saudi millionaire, and al-Qaida scarcely existed. Former CIA director James Woolsey has said that the earliest inkling of any connection between bin Laden and the 1993 bombing came two years later. Until the FBI investigation resulted in the indictments of Sheik Omar Abdel-Rahman and his network, nobody knew for certain whether a terrorist group or a foreign state was responsible for the '93 attack.

So Clinton didn't "respond" by launching missiles or sending special forces because there was no proven target for that kind of military action. As a leading authority on terrorism, Giuliani ought to be aware of those very basic historical realities. But by saying that the Democrats couldn't face the threat of terrorism in the 1990s, he is suggesting that Clinton did nothing as president to confront Islamist violence. Not only is that implication false, but it turns a decade's history backward. Whenever Clinton behaved resolutely abroad, it was the Republicans who sought to weaken him -- and the United States -- with partisan assaults on his foreign and security policies.

When Clinton tried to sustain the U.S. mission in Somalia, for instance, Senate Republicans (including John McCain) cut off funding and demanded retreat. When Clinton struck al-Qaida installations in Sudan and Afghanistan in 1998, those same Republicans and their media allies complained that his actions were merely a "wag the dog" distraction from impeachment -- and later whined that he hadn't done enough to get bin Laden. Later still, they stopped worrying about bin Laden when the Bush administration decided to essentially give up on apprehending or killing the al-Qaida leader. That includes Giuliani, incidentally, who has never demanded that his friend Bush live up to the promise to get the terrorist chief "dead or alive."

The list of Clinton's actions against terrorism and specifically against al-Qaida is long; the list of his efforts to prepare domestically against a terrorist attack is even longer. He and his aides tried to warn the incoming Bush administration about al-Qaida's plans to attack the United States, but they were brushed aside, as were the study group led by former Sens. Gary Hart and Warren Rudman; Bush's own counterterrorism director, Richard Clarke; and CIA chief George Tenet.

As for Giuliani, what did he do after the '93 bombing? In their reporting for "Grand Illusion: The Untold Story of Rudy Giuliani and 9/11," journalists Wayne Barrett and Dan Collins went to great lengths to find out. The answer, they discovered, was that he did nothing. And he said nothing. After he was elected mayor later that year, he still did and said nothing about terrorism, a pattern of inaction and inattention that continued for years, even as the trials of the bombing perpetrators went on in his city -- and even as federal investigators uncovered terrorist plots to blow up the Hudson River tunnels and other major New York City targets.

Eventually, as Barrett and Collins reveal in their stunning book, Giuliani made a series of foolish, self-serving mayoral decisions that exacerbated the damage and deaths caused by the terrorists on 9/11. More recently, his stupidity and vanity almost led to the appointment of an unqualified felon named Bernard Kerik as America's secretary of homeland security.

It is Giuliani, not Clinton, who has the most to fear from an honest examination of what happened in 1993 and its aftermath. His presidential candidacy will implode on the day that Americans finally grasp the full truth about his performance as mayor.