Free speech for the rich and powerful

How the Roberts-led Supreme Court is setting the stage for bureaucrats to shape American culture from the top down. 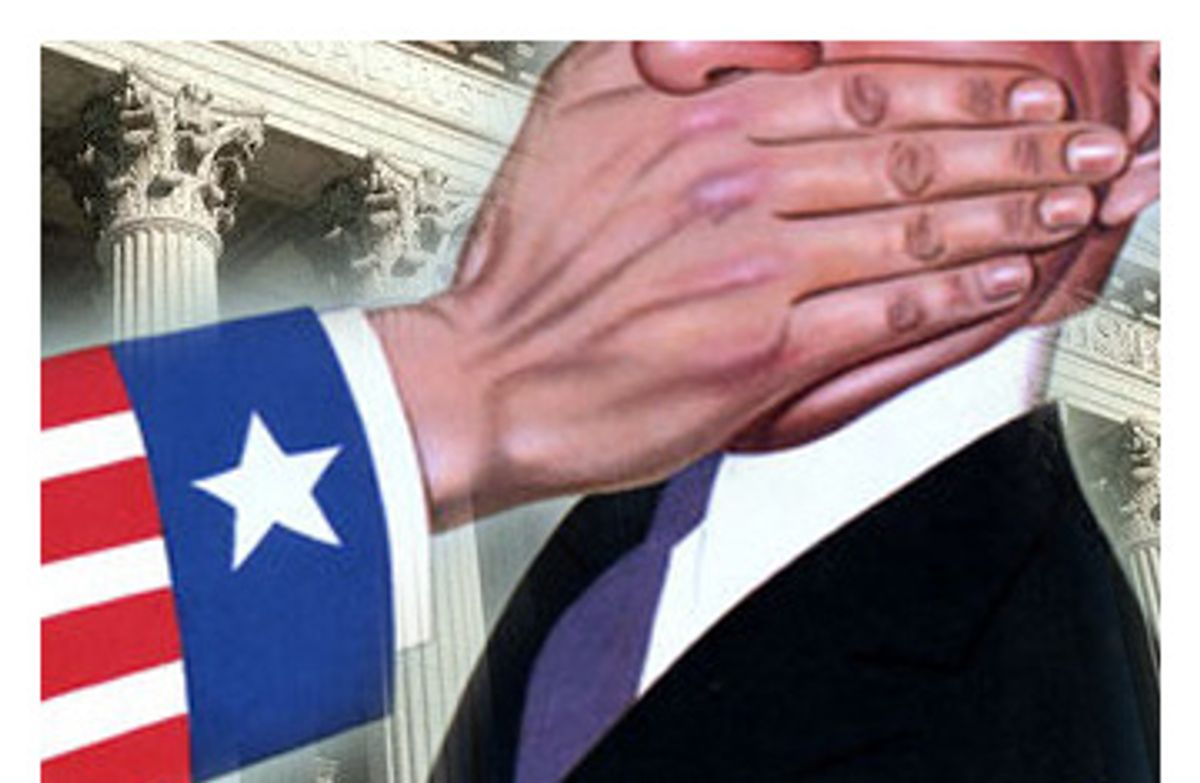 "Where the First Amendment is implicated," Chief Justice John Roberts wrote this week in an important free-speech opinion, "the tie goes to the speaker, not the censor."

It's a comforting thought, and a nice example of the kind of judicial rhetoric Americans are used to. It appeared high up in most news accounts of the Supreme Court's decisions in three First Amendment cases on Monday, and it is sure to appear in conservative commentary hailing the arrival of the Roberts court.

Unfortunately, the implication that this court defends First Amendment rights is pretty much hogwash. If one carefully reads all three of these First Amendment cases, the court is really saying that the tie goes to speakers who have money and power. That is, if the speaker is rich and influential, then free speech wins. If not, free speech loses. Taken together, the cases give a picture of a new court majority that takes a very narrow view of free speech and a deferential approach to bureaucrats who seek to shape American culture from the top down.

Considering that one of the three cases dismissed the right of high school students to ridicule the solemnities of their elders, the cases might be scored as Ferris Bueller 0, Ben Stein 3. The cases also provide an example of how the new justices, John Roberts and Samuel Alito, operate. Both proclaimed themselves respectful of precedent; and unlike Justices Antonin Scalia and Clarence Thomas, they did not go in for the wholesale overruling of precedents they dislike. Instead, in all three cases, they have chosen to narrowly interpret previous cases, until in the end there is almost nothing left of them. Think of it as a soothing way of diminishing liberal precedent, slice by tiny slice. But the direction is clear, and we should not be confused about where this court is taking us. "Reason by degrees submits to absurdity," Samuel Johnson once wrote, "as the eye is in time accommodated to darkness.''

Consider the first case, Federal Election Commission v. Wisconsin Right to Life, Inc. This is the case that gave the court the opportunity to praise its own devotion to freedom of speech. The issue was whether Congress could ban certain types of interest-group advertisements -- in essence, disguised ads for or against candidates -- within 30 days of a federal election. This restriction on "electioneering communications" was a key provision of the McCain-Feingold Act, passed in 2002, which sought to limit the impact of special-interest funds on political campaigns. Wisconsin Right to Life ran TV spots attacking Sen. Russell Feingold for supporting the Democratic filibuster against President Bush's most conservative judicial nominees. "Contact Senators Feingold and Kohl and tell them to oppose the filibuster," the ad concluded. As luck would have it, the ads were running just before the Wisconsin senatorial primary, in which Feingold was running for re-nomination. Right to Life had earlier announced that one of its priorities was ridding the Senate of the stubbornly independent Feingold; so even though the ad did not say, "Defeat Feingold," a lower court held that it was barred under the law, and that Right to Life's challenge was foreclosed by McConnell v. Federal Election Commission, a 2003 case that said the courts would not hear most challenges to McCain-Feingold.

The majority reversed the lower court and held that this set of ads was not an "electioneering communication." It didn't overturn McConnell, but it did interpret it so narrowly that it's hard to see what pre-election ads it will cover. And in that context, Roberts enunciated his theory that First Amendment interests win in a tie.

The issue is a genuinely complex one, and there are very powerful arguments against government attempts to limit speech by any person or group in the run-up to an election. So perhaps it is a coincidence that this is the only one of Monday's cases that the challengers won; that the speech at issue was nothing that wouldn't fit into a sound bite on Fox News; that the speaker was a powerful and well-financed political group; and that the speech in question could be read as "Vote against any candidate who opposes judicial nominees like, say, John Roberts and Samuel Alito." But if it is a coincidence, it's a striking one.

Consider the next case, Hein v. Freedom From Religion Foundation. In that case, the challengers sought to block the White House Office of Faith-Based and Community Initiatives from funding conferences designed to promote the administration's radical contention that government social service funds should flow through avowedly religious groups as part of their proselytizing mission. The Freedom From Religion Foundation argued that this use of tax money violated the First Amendment's prohibition on government "establishment of religion." They went into court under Flast v. Cohen, a venerable precedent from the Warren Court era that permits taxpayers to challenge tax expenditures used for promoting religion. In most cases, taxpayers can't sue the government just because they don't like the way their taxes are being used; but the Supreme Court in 1968 had made an exception for establishment challenges. It read James Madison's writings on establishment to suggest that the use of tax monies for religious purposes was a gross violation of the rights of conscience, even if the amount thus extorted from the taxpayer was small -- even, Madison said, if it was " three pence only."

The Roberts court dismissed the challenge; it didn't overrule Flast -- that would have seemed radical -- it simply reinterpreted it to allow challenges only to congressional appropriations directly for religious purposes. Because the White House Office of Faith-Based and Community Initiatives was set up by executive order rather than by congressional line item, the case was dismissed for lack of standing. As in Wisconsin Right to Life, an existing precedent has been left as a shell of itself. Under the new interpretation, citizens will be able to go to court only against congressionally passed statutes that in essence proclaim their religious nature, say, "An Act to Establish an Official Religion and Fund It." In the 21st century, however, it is the executive that makes most of the decisions about how appropriated funds are spent; and the court has now proclaimed those decisions off limits to religious objectors. In this case, a tie pays the powerful.

The same is true, most painfully, in Morse v. Frederick -- the "Bong Hits 4 Jesus" case. An Alaska high school sent its students out to the street to watch the Olympic torch pass by; as it did so, a group of students, clearly hoping to get themselves on television, unfurled a large banner with the enigmatic memo, "Bong Hits 4 Jesus." Acting on the repressive instinct of every high school principal everywhere, the Alaska high school's Deborah Morse demanded it be taken down at once. When one irrepressible scamp, Joseph Frederick, refused, the principal confiscated the banner and suspended him.

The principal argued that the banner needed to come down right away because it encouraged drug use. Frederick said "the words were just nonsense meant to attract television cameras."

As we learned during his confirmation, Chief Justice Roberts is an indefatigable grammarian, and in his opinion he engaged in an exhaustive parsing to conclude that the phrase must mean either "[Take] bong hits..." or "'bong hits [are a good thing],' or '[we take] bong hits.'" And thus Frederick was either advocating or celebrating drug use, Roberts reckoned, and could be punished because "failing to act would send a powerful message ... about how serious the school was about the dangers of illegal drug use." To put it another way, as Roberts sees it, schools have the power to make sure that students not only listen but that they don't laugh at the message. In Roberts' view of students' view of free speech rights, laughter is not protected. Humorlessness: The anti-drug.

Anyone who remembers high school should have understood that the message was not one to be decoded by Roberts' pedantic brackets and ellipses; it was the same message sent by students everywhere every day in every free society -- "This whole thing is a farce" or, in the words of Lewis Carroll's Alice, "Who cares for you? You're nothing but a pack of cards!"

The idea that that in a free society debate should be, as a former Supreme Court said in New York Times v. Sullivan in 1964, "uninhibited, robust, and wide-open" does not apply to the young. Solemn acquiescence is the major skill of citizenship to be taught in the schools of our democracy, and those who will not learn the lesson can be punished.

The concept of freedom sketched by these three opinions is an thin one. We have the right to listen to TV ads from PACS. When the executive branch wants to lecture the rest of us about how we should believe in God, we have no right to challenge their actions, taken in our name and with our funds. And when the government sets out to make our children conform, they'd better not give back any guff about the emperor lacking clothes.

You, reading this: Welcome to American freedom, ca. 2007. And wipe that smile off your face.