The iPhone: A quick first look

The iPhone is amazing, but if only Apple opened it up, it could be so very much more. 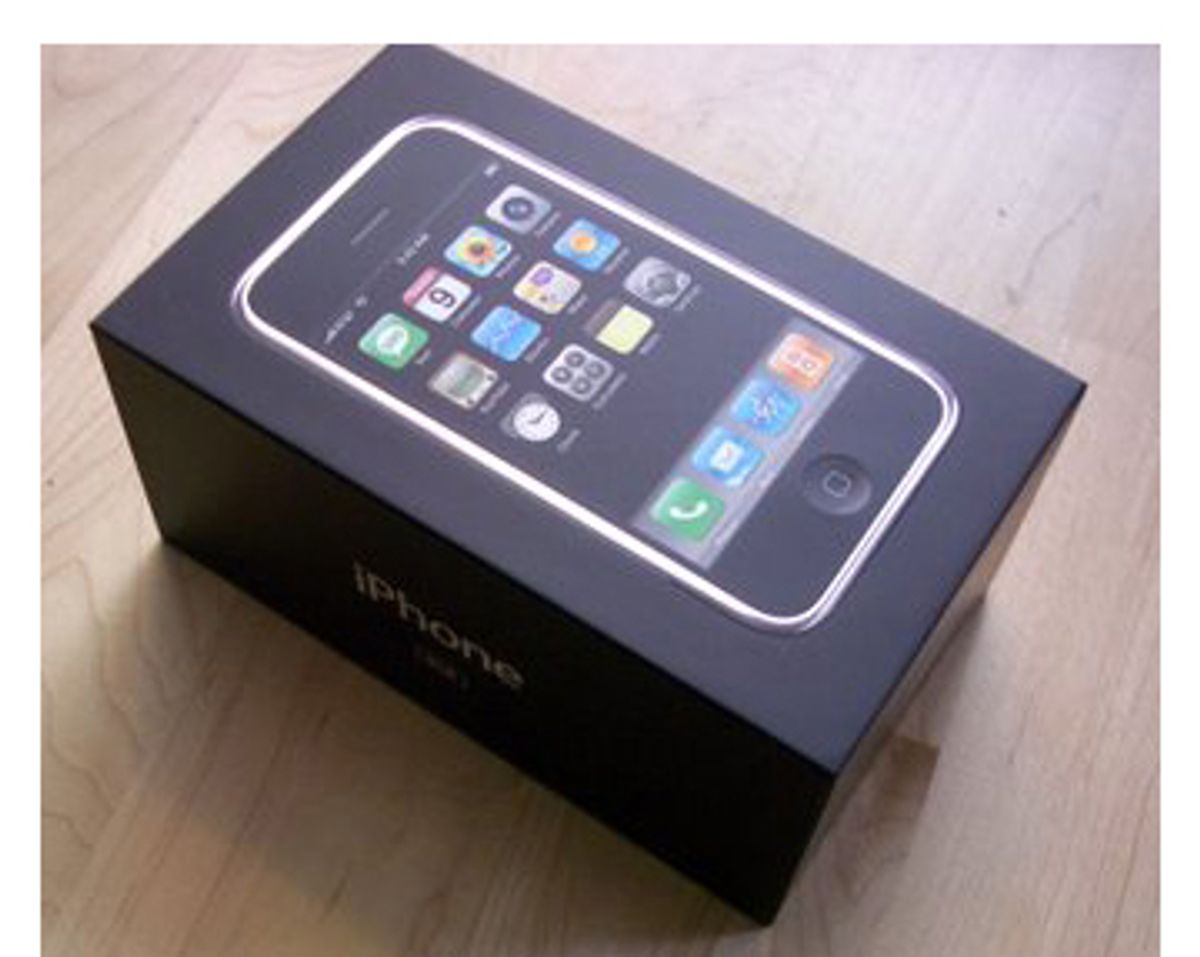 After waiting more than 10 hours in line on Friday, the process of buying the iPhone turned out to be surprisingly fast. The Apple Store staff were orderly and efficient, and I was out of the shop, box in hand, in a couple of minutes. I've been at it with the phone ever since. Here are my initial thoughts. Let's start with the good:

Activation: Apple has built a fantastically easy activation process right into iTunes. You plug your phone into your computer, then enter your billing info and select a rate plan -- $60, $80 or $100 per month -- from within the software. The process might take more time if you're switching a previous telephone number to your new phone -- I'm using an existing Cingular/AT&T plan, so my iPhone was ready to make calls within five minutes.

Multi-touch: The iPhone's killer app is your finger. Tapping, pinching and pulling at the phone's "multi-touch" feels wonderfully intuitive, and the gestures quickly become second nature. This is the one inarguably revolutionary innovation here, as big as the mouse as the click-wheel. Try not to keep touching it. You can't.

The keyboard: The keypad was to be the iPhone's Achilles'; for months now, industry wags have warned that screen-based typing would be a frustrating affair. I was surprised, then, to pull up the keypad and find it not just not bad, but terrific. What the screen lacks in tactile feedback -- you can't feel the buttons, of course -- it makes up for in speed, because you're only touching, not pressing, each letter. The error-correction quickly fixes up most typing flubs ("ia" becomes "is," "tupung" becomes "typing") -- but not all ("shat" is not fixed to "what"). Typing on a mobile will likely never be as easy as typing on a full keyboard, and I suppose your experience may depend on the shape of your fingers -- but in a short while, I was really flying on this thing, and for me, the iPhone's keyboard is a plus, not a minus.

The Web (on Wi-Fi): The phone easily found my Wi-Fi connection, and through that network, Web sites came up quickly and beautifully on the iPhone's version of Apple's Safari browser. You've never seen the Web on a mobile like this. Because you can flip the phone on its side and have sites load up widescreen, the type is amazingly readable. (If you're worried about the iPhone's price tag, consider that it's about the same price of a year's subscription to the New York Times -- and the iPhone makes the Times much more portable than print.) There's a caveat here, however: When you're not in range of Wi-Fi, the iPhone connects to the Internet using EDGE, a cellular data pipe that is unbearably slow. On EDGE my iPhone took as much as 20 seconds to load up an e-mail, and minutes to get certain Web pages. (The phone, thankfully, automatically switches over to an available Wi-Fi network if it's in range.) A future version of the iPhone will use a faster network standard called 3G, and if you want a truly mobile Web, it's best to wait.

The iPod: Steve Jobs calls the iPhone Apple's best iPod, and I'd concur, mainly for two great features. The first is something I've long wanted in an iPod: a physical volume button. On a traditional iPod, if you're listening to a song while navigating through the on-screen menus, there is no quick way to lower or raise the playing volume -- so if a bus pulls up near you, you've got to wait a few seconds for the device to get back to the appropriate screen before you can change the volume. The iPhone fixes this problem with a little rocker-button on its left side. Apple should add one to every (non-Shuffle) iPod

Video is this iPod's forte. To test it, I watched a couple of iTunes-purchased episodes of the Aaron Sorkin head-scratcher "Studio 60 on the Sunset Strip." (Even though the iPhone has an Internet connection, you've got to buy and fully download the episodes to your computer, then sync them to the phone, as you do with the video iPod and Apple TV. I didn't like this setup on the Apple TV, and I don't like it on the iPhone, either.) I found the iPhone's widescreen display sharper and easier on my eyes than the display of either a video iPod or my laptop. If you hold the phone about a foot away from your face, the picture envelops you, and in a dark room, it can feel almost like a theater. The iPhone's version of Safari won't run Flash, so it's closed off from a great many Web videos -- except for YouTube, which runs in its own pre-built application in the phone. Over Wi-Fi, YouTube videos come in pretty well. On EDGE, you might as well not bother.

Now for the bad:

The phone and the network: I've long labored under miserable AT&T mobile service using lesser phones; now I can get unsatisfactory mobile service on my iPhone! Throughout San Francisco, AT&T signal strength varies wildly from place to place and from second to second. The first call I made on the iPhone dropped out briefly -- I was ordering take-out and had to repeat my order.

But you've got no choice. Apple has chosen AT&T as the iPhone's exclusive network provider. This week Working Assets, the phone company whose mission is to do well by doing good, put out a petition urging Steve Jobs to "unlock" the iPhone -- that is, to let people use it on any provider they choose. People ought to have the right to choose whatever device they'd like to use on whatever network, Working Assets argues. And if you're going to get stuck with a network, AT&T would likely come up last in your list. Here's a company that is currently fighting network neutrality, helping the NSA spy on Americans, and developing a way for Hollywood to police the Internet. As Cory Doctorow asks, "Honestly, is there anyone who believes that having a captive audience of two-year-locked iPhone customers will incentivize AT&T to behave better?"

Screen smudges: I've only been using the phone for a day, so I can't say yet if the screen scratches easily. What I can tell you is that it collects more prints than an O.J. Simpson crime scene. Face oils, too, are menace. Fortunately the box includes an elegant logo-embossed wipe-up cloth -- carry it along if you want to avoid a grody iphone.

What's missing: Oh, so much. 3G networking is the big omission, but as you fiddle around with your new phone, you begin to notice many other features Apple seems to have forgotten about. The iPhone doesn't let you copy or paste text, and, worse, it doesn't let you select any text -- which makes moving or deleting a long line quite difficult. The phone's e-mail program does not include a search feature, so you've got to scroll through dozens of messages to find what you're looking for. The contacts and calendar applications are also missing a search -- but this didn't bother me much because the iPhone failed to sync up with my computer's names and dates. That's because on a PC, the phone can only get contact and calendar info from Outlook, and not from Gmail or Google Calendar or any of the world's other information management applications. (The iPhone can also only import Web bookmarks from Internet Explorer or Safari -- not from Firefox.) There's no instant messaging application either, there are no games, and you can't add in any ringtones.

I'm sure to get deluged by Mac fans telling me this is all temporary. Apple is certain to offer software upgrades to fix or add most of what's wrong with this first version of the iPhone, they'll tell me. And they're right. But that I have to depend on Apple -- rather than on a wide world of software developers -- to fix what's wrong doesn't entirely comfort me.

You need to use this phone for just a couple of minutes to realize that what you have in your hand is not at all a phone -- it truly is a brand-new kind of machine, a fully functional general-purpose computer in your pocket. But because Apple has (so far) prohibited third-party development on the phone, it's a stunted general-purpose computer, one that depends on a single, specific company for its every innovation. I would like to see an iPhone version of Google Gears, the new app that stores Internet content offline, so that, while I'm connected to Wi-Fi, my phone could slurp up hundreds of blog posts for me to read when I'm on a plane. But I can't do that unless Apple allows it. I would like to see an iPhone version of Skype, and Quicken, and Pandora, and of course Firefox -- my kingdom for an iPhone Firefox and its bazillion plug-ins!

And one more thing: It's $600! I'm not used to treating my cellphone with much respect. I throw it in my bag, I flash it around in public, I don't think twice about slipping it in the security tray when I'm going through the airport. The iPhone alters that calculus of risk. When the thing in your pocket is worth half a month's rent, you feel yourself constantly on alert. Every time I pick it up, I clutch it tight. The iPhone looks like it could survive a fall, but let someone else try first.

Watch this space for more iPhone assessments in the days to come.