America may be in the midst of full-on wedding mania, but a new craze for gown wrecking has tapped into a rich vein of bride rage. 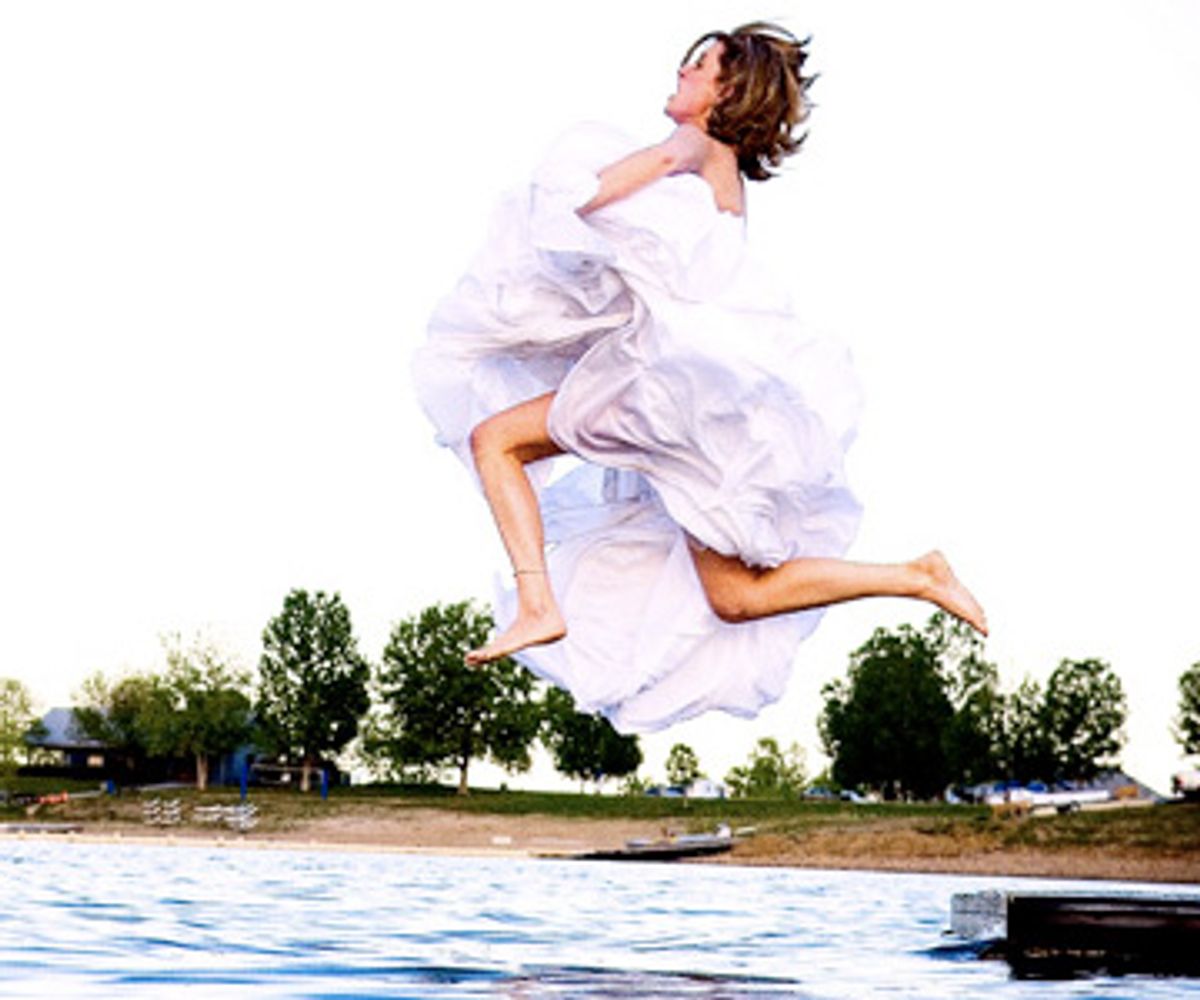 Weddings present a staggering array of decisions. Nobody wants to obsess over after-dinner mints, but what if you're remembered forever as "those cheap, mintless bastards"? Then there's the venue, the flowers, the invitations. Recently, one more item has crept onto this mind-bendingly long list: What is the bride going to do with her dress after the ceremony? Preserve it, give it away -- or wreck it?

The past year has seen the rise of a gleefully destructive post-wedding ritual: the "trash the dress" photo shoot, in which the bride models her gown while romping in the ocean, climbing up a fire escape, rolling in the mud, or, in at least one occasion, riding a horse. These sessions take place after the wedding. Sometimes the groom is around; sometimes he's not. The resulting photos often exude a gentle gothiness, like album covers from bands playing the second stage of the Lilith Fair circa 1997.

There's something both appealing and disturbing about the idea of a bride wrecking her expensive gown. As a culture, we're obsessed with weddings. A recent spate of books, articles and TV shows about this wedding obsession has raised our level of self-awareness; in fact, we're now a nation obsessed with wedding obsession, tsk-tsking in front of the new season of Bridezillas on the WE network and wondering why all those other women are such nut jobs. The problem is that it's a closed loop: Whether you're fretting about your own invitations or someone else's invitation-induced nervous breakdown, you're still reacting to the American cult of the bride, that gracious, white-clad perfect host.

Dress trashing seems like a potential way out of the loop, a temper tantrum aimed at the restrictive rules of bridal femininity -- albeit a photogenic one. Online, the trend coalesces around TrashtheDress.com, a Web site created in September 2006 by Louisiana photographer Mark Eric. The "godfather of trashing," according to Eric, is Las Vegas wedding photographer John Michael Cooper, whose casino-noir style and punk swagger (his company is called altf, short for "alternative fucking photography") helped shape -- and, more important, brand -- this new kind of bridal photo.

In February of 2006, on the group blog for photographers Wed Shooter, Cooper published an essay titled "Show Off! a.k.a. Trashing the Dress" about some pictures he'd taken in the Nevada desert. Stumbling upon an unearthly area of burned-up mesquite, he decided that what would really complement the post-apocalyptic landscape was a woman in a wedding dress. Four of his bridal clients turned him down, fearing they'd get dirty, so he bought a gown for $100 on eBay and got a friend to model. The resulting pictures were so unusual and haunting that brides began requesting similar shoots, and Cooper started posting them on photography forums.

Eric read the Wed Shooter piece and got inspired. That May, he pitched a trash-the-dress session to Shana Strawcutter, a free-spirited New York bride. As a gift to her, he registered TrashtheDress.com and uploaded a slide show of photos: Shana in a dingy-floored cake shop, Shana standing in the rain in Times Square, Shana jumping in a fountain. A regular on several online forums for photographers, Eric soon began seeing similar bridal photos snapped by his colleagues and realized his choice of domain names had been prescient. In September 2006, he turned the site into a gallery for these trash-the-dress pictures and published an open call for submissions. It grew slowly but steadily, reaching 100,000 people by May 2007. Then the New York Times, "Good Morning America" and "Entertainment Tonight" came calling, and within less than a month the number of readers had nearly quadrupled. Clearly, trashing the dress had tapped into a rich vein of bride rage.

According to Eric, the idea had actually been around for years at destination weddings, where photographers would take their clients out to the beach for "newlywed sessions," also called "day-afters." Both names suggest gauzy, softcore photos of couples reenacting the famous shore scene in "From Here to Eternity," and both carry a certain winking innuendo. "Trash the dress" sounds infinitely cooler. Ironically, Cooper doesn't like the term, preferring to call the pictures "anti-bridals." But by coining a phrase that focuses on the gown instead of the woman inside it, he managed to turn an element of pleasant (if racy) travel photography into an act of rebellion. As Mark Eric puts it, the point is to "make Grandmaw gasp."

The last big trend in wedding photography was photojournalism, a reaction to the stiffness of posed family shots. For a while photographers revered candidness and recoiled at the idea of staging a shot. That style doesn't always yield the best pictures, though, so more and more couples are hiring people who would rather play fashion director than news photographer. Most photographers view trash-the-dress sessions as a bonus and don't charge for it unless a different person shot the wedding. They tend to love the sessions because it gives them a rare chance to be creative with a bride; often, they're the ones who bring it up, once the traditional shots are all finished. "People pick me because my photos are nontraditional anyway," says Denise Neufeld, a wedding photographer in California. "So I haven't encountered any resistance."

The wedding dress is the centerpiece of the American wedding industry, and it occupies nearly as big a role in the minds of many brides-to-be. The average gown costs $1,841, though designer dresses can go up to $10,000. Women spend months looking for the perfect dress, then spend even more time getting it fitted. Even boho brides put hours into finding the perfect wedding-dress alternative (see the bustling forum on IndieBride.com). And the obsessive focus doesn't stop once the big day arrives. According to Neufeld, her clients spend their wedding receptions worried about keeping the dress clean, so deliberately dirtying it up acts as a kind of release.

Of course, the emphasis on perfection goes beyond the gown. Couples struggle to please family members, satisfy their own fantasies, and fill the requirements of tradition -- often contradictory goals. Dealing with all these constraints on their behavior can make people feel trapped and enraged. Wedding magazines and Web sites make things worse by constantly reminding the bride that this is her one shot for fairy-tale romance; life will never get this magical again. That kind of pressure often leads to New Year's Eve syndrome, wherein it's completely impossible for the event to live up to the hype. After the wedding, the stress ends, but often there's a sense of letdown: The party's over, the vows have been said, so now what? This can be especially hard on women, who exchange the culturally exalted and powerful role of bride for the ho-hum role of wife.

In April, TrashtheDress ran an essay by a bride named Andrea Santos, who called her experience therapeutic. "There's something about taking such a strong symbol of the wedding and destroying it, that liberates you ... frees you from the residual stress from the wedding ... There is nothing holding me to the wedding anymore. I have the pictures, I have memories -- that's all I need. I'm done with it, ready to leave it behind and move forward."

Eric adds that trash-the-dress sessions are fun because they "put the bride on a pedestal." This is ironic for two reasons: First, instead of setting her up as a subject for worship, the photos often literally do the opposite, lowering her into a bayou or city fountain. Second, it's exactly what every wedding industry specialist says about their business. As rhetoric, it doesn't differ at all from the ideas behind the stiff, formal aesthetic these brides are supposed to be rebelling against.

So why all this fuss over a dress? Wedding clothes are uniforms: They tell viewers who plays what role, and how we should react. In a culture with such a high premium on individuality, uniforms are bound to inspire some rebellion. Look at the way girls at private or parochial schools that require matching dress tend to modify their outfits in small ways, rolling up their skirt waistbands or wearing conspicuous jewelry.

Rebelling against bridal gear means giving up a lot of power and privilege, though. When people say all brides are beautiful, they don't mean that ankle-length white dresses are universally flattering -- they mean that the costume confers a mantle of beauty. Women grow up constantly aware that they're being judged on their looks; a wedding is the one time when they're guaranteed to ace the test. Who wants to surrender the chance to be the most captivating person in the room? Trashing the dress allows for a kind of punky sticking-it-to-the-manness that allows women to feel unique without losing their bridal power.

Few material objects climb in value and then depreciate more quickly than a wedding dress, trashed or preserved. On purchase, it's worth several thousand dollars; on the big day, it's nearly priceless. (You could make a fortune kidnapping and ransoming wedding dresses on Saturdays in June.) The day after that -- closet fodder. Mummifying a gown for storage usually costs between $200 and $400, though for a complicated dress the price could go as high as $800. The Association of Wedding Gown Specialists brags about its trademarked MuseumCare process, also used by curators at both Christie's and Sotheby's. The point is to turn the dress into a relic. It's a way to hold onto your bridal experience, like Miss Havisham if she'd landed the man.

Trashing the dress rebels against this high-maintenance nostalgia. Brides rarely want pre-worn gowns; in 2006, only 10 percent said they had bought a used dress. But ruining the dress, as many have noted, isn't any less wasteful than stashing it in the attic. Jane Eaton Hamilton, a photographer in Vancouver, British Columbia, says she's helped two brides trash Vera Wangs. Mucking up a designer gown is certainly a decadent gesture; then again, so is buying one.

Hamilton and other trash-the-dress proponents are quick to mention that few dresses are really ruined: "You don't really get much dirtier than you would at the reception." So why not just take pictures of the reception? Getting married excuses a lot of self-indulgence -- one could argue that the entire ceremony is about indulging yourself, and the selfhood of your mate -- but no one should mistake trashing the dress for a less narcissistic option. It still involves playacting, just of a different kind: Instead of pretending to be well-mannered Victorian society ladies, as in traditional wedding photos, brides pretend to be mud-splattered waifs, faking rebellion for posterity.

Would the dress trashers jump into fountains and roll on the beach without the photographers around? The point of trash-the-dress sessions is the documentation, but that's also their fatal flaw. A friend of mine recently ran into an acquaintance and his new wife the night of their wedding. They'd gone straight from the reception to a local bar, and the bride, still in her white gown but now supremely drunk, was puking over the curb. That is an authentic expression of dress trashing. It doesn't have to involve binge drinking, but shouldn't the fun inspire the photos, rather than the other way around?

Izzy Grinspan edits the features sections of Jewcy. Her work has been published in the Believer, the Forward, and the Philadelphia Weekly.