A posthumous memoir from murdered journalist Anna Politkovskaya gives readers a glimpse of the dark side of post-Soviet Russia. 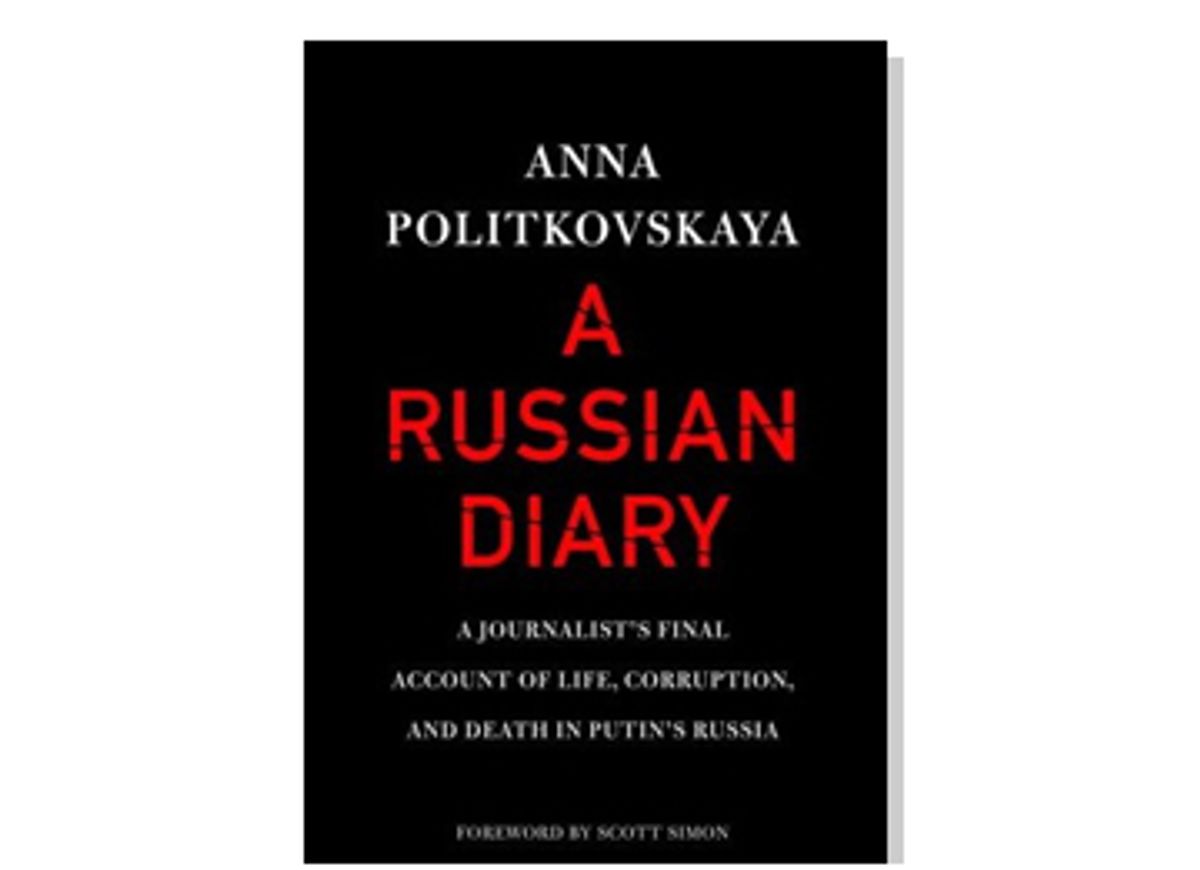 Standing next to Vladimir Putin at a press conference in June 2001, George W. Bush famously looked into the Russian president's soul and declared, with typical bravado, that he was a good man. The attacks of Sept. 11 would bring Russia and the United States even closer, with Putin drawing similarities between the "war on terror" and his own struggle against Chechen separatists. It seemed that lingering Cold War suspicions might finally dissolve: For the first time in almost a century, Russia had a free press, booming private enterprise and a glittering postmodern city in Moscow.

Today the two superpowers are at loggerheads again -- over the Middle East, missile defense, energy prices, human rights -- and Bush surely regrets that gushing optimism of six summers ago. Nearly all of the reforms Western observers once lauded have been rolled back by a regime increasingly uncomfortable with dissent. Hardly an independent news outlet remains in Moscow; the war in Chechnya, like our own venture in Iraq, continues with plenty of bloodshed but no coherent vision, and successful corporations have been systematically dismantled by the Kremlin.

Anyone curious about why Russia's post-Soviet flirtation with democracy has been such an erratic affair will find Anna Politkovskaya's "A Russian Diary" an indispensable tome. A reporter for Novaya Gazeta (New Newspaper), one of Russia's last organs of liberal media, Politkovskaya gained prominence -- and notoriety -- by chronicling the gradual depredation of civil liberties that began when Putin took power in 1999 and reopened the Chechen conflict that his predecessor, Boris Yeltsin, had waged to keep the small mountain region from gaining autonomy. Like the great accounts of Soviet life -- most notably, Nadezhda Mandelstam's "Hope Against Hope" and Aleksandr Solzhenitsyn's "Gulag Archipelago" -- "A Russian Diary" is at once an indictment of the ruling elite and a testament to Russia's inability to reconcile national aspirations with the welfare of common citizens.

Sadly, "A Russian Diary" is a posthumous publication. Politkovskaya was gunned down in the lobby of her Moscow apartment last fall with several point-blank shots that, as any Russian knows, signal a contract killing. She certainly garnered enough enemies with her bare-knuckled approach to political commentary, and her dogged criticism of the Kremlin in Novaya Gazeta investigations and in unabashedly polemical books like "Putin's Russia: Life in a Failing Democracy" and "A Small Corner of Hell: Dispatches From Chechnya" regularly infuriated the state apparatus and its military chiefs. That she died on Oct. 7, the birthday of Vladimir Putin, may be a coincidence, but it is a savage one, since she was his most pointed critic inside Russia, and the one most widely read in the West.

Her final work, which she was editing at the time of her death, is a loosely organized record, culled from her notebooks, of recent political firestorms. "A Russian Diary" opens in 2003, with Putin's nationalistic United Russia party running roughshod over opponents in the parliamentary election, blithely handing out vodka for votes and assaulting opposing candidates. Its victory lays the groundwork for the following year's presidential contest, which Putin wins with the kind of inflated margin only despots expect. Later chapters, which move from political analysis to frontline journalism, detail the unraveling of the Chechen War, a cancerous process that culminates in September 2005 when separatists seize a school in the border city of Beslan, outfitting its gymnasium with bombs that will kill almost 400 civilians, more than half of them children. Through all this, she writes with the breathless alarm of a geologist on the precipice of an erupting volcano, and nearly every entry -- whether she is visiting veterans in Siberia, a demonstration in Moscow or a Chechen village mourning its dead -- has the urgency of a last dispatch from the crater's mouth.

American readers, accustomed to a measure of kinship with their authors, might be disappointed that Politkovskaya herself makes no appearance in these pages. We learn nothing of her birth in New York to parents who, as United Nations diplomats, gave her a vista of life beyond the Iron Curtain. Her daughters are absent from "A Russian Diary"; so is her husband, who allegedly left her with the words "I can't take this anymore" as she returned from one of her sojourns in Chechnya. Such omissions may appear strange, but Politkovskaya was less Sylvia Plath than Joan of Arc, and her pugnacious rhetoric was meant to rouse her countrymen from the relative complacency that the Putin years, with their carefully parceled comforts, had instilled.

For while she found an audience in the West, where she was routinely showered with accolades and awards, Politkovskaya always wanted her words to resonate at home. "We have emerged from socialism as thoroughly self-centered people," she pronounces in "A Russian Diary" with characteristic acerbity, noting that most of her countrymen would choose a luxury vacation over the freedom that Soviet dissidents had fought so hard to attain. Reading this uncompromising volume is not unlike listening to a parent scold a wayward child, and Politkovskaya's anger can be hard to swallow unless one already sympathizes with her position. At the same time, it is difficult not to share her disgust with the "bacchanalia of indifference" that has allowed Putin to dismantle the nascent foundations of Russian democracy in favor of what he once ominously branded "the dictatorship of law."

Her primary target is Putin himself, the bloodless KGB operative who rose quietly through the ranks of Yeltsin's administration to become prime minister without having ever served in elected office. Weary of Yeltsin's alcoholism and unpredictability, the West welcomed Putin's promise to tame the Wild East with its trigger-happy mafiosi, sleek robber barons and restless liberals. Politkovskaya never bought it, espying in Putin the same ruthless impulses that sacrificed millions for the sake of hammer and sickle. "Who can say we are not returning to Stalinist ways under Putin?" she wonders after the '04 presidential campaign, in which Putin suppressed media criticism while collecting endorsements from opposing candidates.

The Kremlin's mismanagement of the Chechen separatist movement, however, has threatened to unravel Putin's carefully sculpted image of stability. "First the Kremlin tried to show the Chechens that resistance to Putin was useless," Politkovskaya writes of the smoldering hostilities that Putin stoked into a full-scale war. "That more or less worked; most of them gave up. Then it was the turn of the rest of Russia." Indeed, one of her central convictions in "A Russian Diary" is that the repressive climate spreading across Russia stems from the Kremlin's desire to keep the intractable conflict under wraps and punish anyone -- journalists, human rights organizations, entrepreneurs and even ordinary citizens -- who might question its authority.

But unlike so many critics of the American misadventure in Iraq, Politkovskaya shows a surprising lack of partisanship. As much human rights activist as journalist, she was equally appalled by all participants in the war, and she only appears self-righteous because her disgust with the Chechen mess is so pervasive. Many believe that her murder was ordered by Ramzan Kadyrov, the militia leader whom Putin crowned as president of Chechnya after he showed up in the Kremlin wearing a track suit; he is excoriated in "A Russian Diary" with merciless descriptions of his sybaritic pursuits and purported mental instability.

Death threats had materialized before, but Politkovskaya largely ignored them, choosing dissent over personal safety. "If I record what is actually happening, it will lead to change, to peace ... I would be betraying these people if I walked away," she told London's Guardian in 2002, after her 39th trip to Chechnya.

This earnest belief that journalism can still affect change in the world is precisely what makes "A Russian Diary" essential reading. Hers may seem a Sisyphean task, perhaps even a touch naive, and it is easy to applaud her bravery with elegiac obituaries on journalistic integrity, as many have done from a safe distance in the West. The greater challenge, however, is the self-examination that Politkovskaya demanded of all democratic societies, which should reveal that Russia is only the mirror, however distorted, of any nation in which private interests and civil liberties negotiate an ever-shifting terrain.

There are also encouraging signs that Russia will not forget her as quickly as some in the Kremlin hoped. Putin at first refused to acknowledge her death, then curtly eulogized her as a person of "minimal influence." But the population finally appears to be tiring of his heavy-handed Soviet tactics; thousands paid their respects and voiced outrage as Politkovskaya was laid to rest, and the last year has seen the resurgence of large-scale democratic protest across the nation, led by Garry Kasparov, the former chess champion and potential candidate of the left in the 2008 presidential election.

These developments offer hope, however slim, recalling prescient words from the opening of "A Russian Diary": "When [the people] really want change, there is nothing you can do to stop it. Is this what they are afraid of?" For all her anger at Russia's direction, Politkovskaya sincerely believed that, sooner or later, the Putin regime would pay for its hubris with a loss of public confidence. How tragic, then, that in her own lifetime she was reduced to a modern-day Cassandra, her earnest prophecies ignored by the very people she was trying to save.