New Prime Minister Gordon Brown edges away from Tony Blair and the Iraq war as the U.K. braces against the rising terror threat. 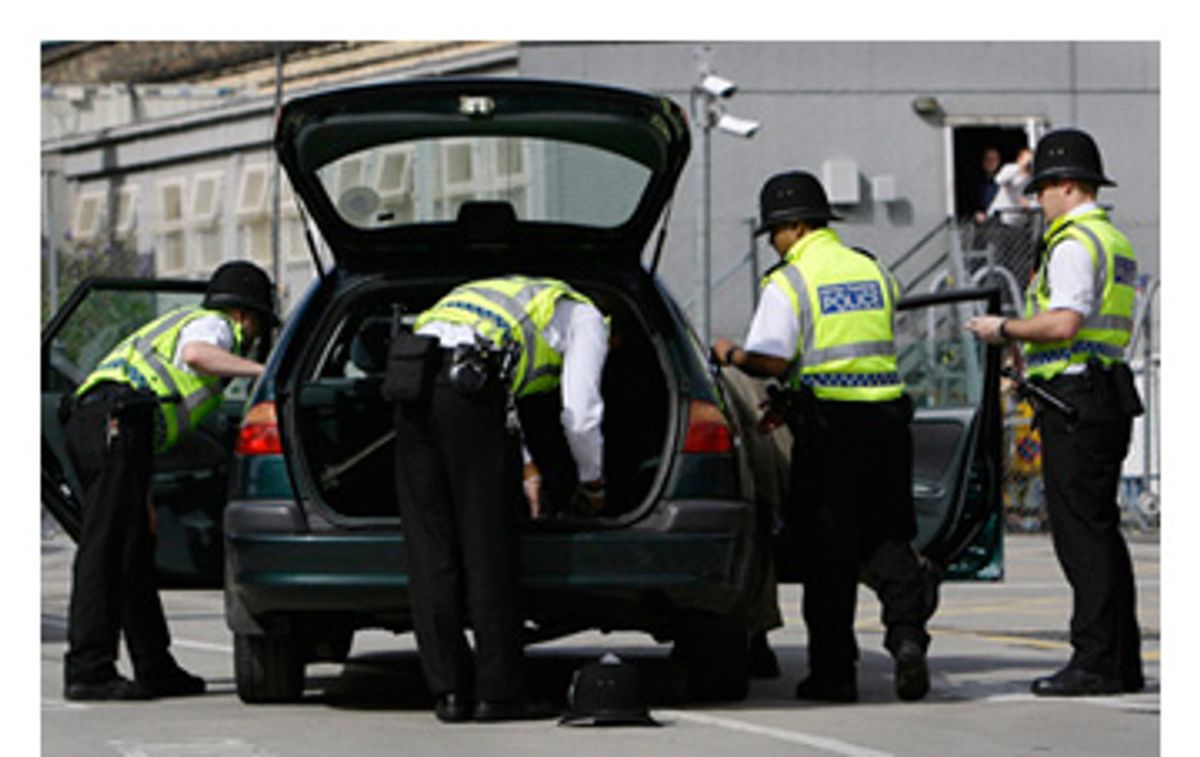 The Tubes are crammed with commuters, the pubs packed with people downing a few pints after work. Even the tourists are out in force in Piccadilly Circus, seemingly more put off by the torrential rain than the fact that a few days earlier, just around the corner, two potentially lethal car bombs -- each of which was stuffed with gasoline cans, nails and propane gas cylinders -- failed to explode. The British have also taken the attack on Glasgow international airport in stride; police and airport officials moved quickly to reopen the airport after two men rammed a flaming Jeep Cherokee into its main entrance. Almost two years after the 7/7 London bombings -- in which four suicide bombers killed 52 people on the capital's public transport system -- the threat of terrorism is something the British have learned to live with.

They've had a lot of practice, of course. Decades of IRA terror inured many to the risk. Over a two-week period in the spring of 1999, three nail bombs, apparently aimed at London's ethnic and gay communities, went off around the city. Then came the July 7, 2005, attacks, followed two weeks later by a second, failed attempt to strike the transport system. These new attacks are different, though, for two reasons. First, this time around Gordon Brown, not Tony Blair, is prime minister. And second, it so far appears that none of the suspects are British-born.

Some have speculated that the Glasgow hit was meant to send a message to the new Scottish prime minister: Your government will not be spared. Glasgow international airport is clearly not a high-profile target, certainly nowhere near as conspicuous as Heathrow, the locus of a failed plot to blow up a dozen airliners last year, or Haymarket in central London, the busy theater and nightclub district where the two car bombs were parked. Brown responded with characteristic solemnity. "We will have to be constantly vigilant," he said. "We will have to be alert at all times. And I think the message that's got to come out from Britain, and from the British people, is that as one, we will not yield. We will not be intimidated and we will not allow anyone to undermine our British way of life." And he deftly sidestepped the question of whether the war in Iraq had made the U.K. a target in the first place: "Irrespective of Iraq, irrespective of Afghanistan, irrespective of what is happening in different parts of the world, we have an international organization trying to inflict the maximum damage on civilian life in pursuit of a terrorist cause that is totally unacceptable to most people."

One columnist described Brown's demeanor as that of an "anxious headmaster." There was definitely something plodding about his rhetoric, but he sounded both assured and reassuring. The style and substance of his remarks were clearly crafted to underline the differences between himself and his predecessor. He went out of his way, for example, to defer discussion of new police powers to question suspects after they have been charged, something Blair had pushed hard for. In the weeks before Brown became prime minister, he was at pains to signal he would be just as tough as Blair on terror, but that he would insist on judicial and parliamentary oversight of any new laws, something to which Blair was often seen as indifferent.

Brown also stressed the need to win the battle for hearts and minds, calling for a "cultural effort, almost similar to what happened in the Cold War b

Three of the four 7/7 suicide bombers were born in Britain to immigrant parents, leading to fears that the war in Iraq combined with Britain's own internal ethnic tensions were spawning home-grown terrorists. So far, none of the seven people arrested in connection with the London-Glasgow attacks are believed to be British-born; two are said to be doctors, one from Iraq and one from Jordan. The fact that there seems to be no local involvement is encouraging, if only because it may suggest the radicalization of young British-born Muslims has not escalated since 7/7. That is small comfort, though, given that this is not the first car bomb plot in the U.K. A similar plan by Dhiren Barot, an Indian-born Muslim convert, was foiled in 2004. Barot was sentenced to 40 years in prison last year for preparing what he called the "gas limos project," a plot to fill stretch limos with propane gas cylinders and detonate them in the parking lots of key London buildings. The British will need all the poise and determination they can muster, because it looks like the threat is here to stay.