Why Cory Booker is mad as hell

Enraged by his city's unfair drug policies, the Newark mayor vows to stop being polite and start making a difference. 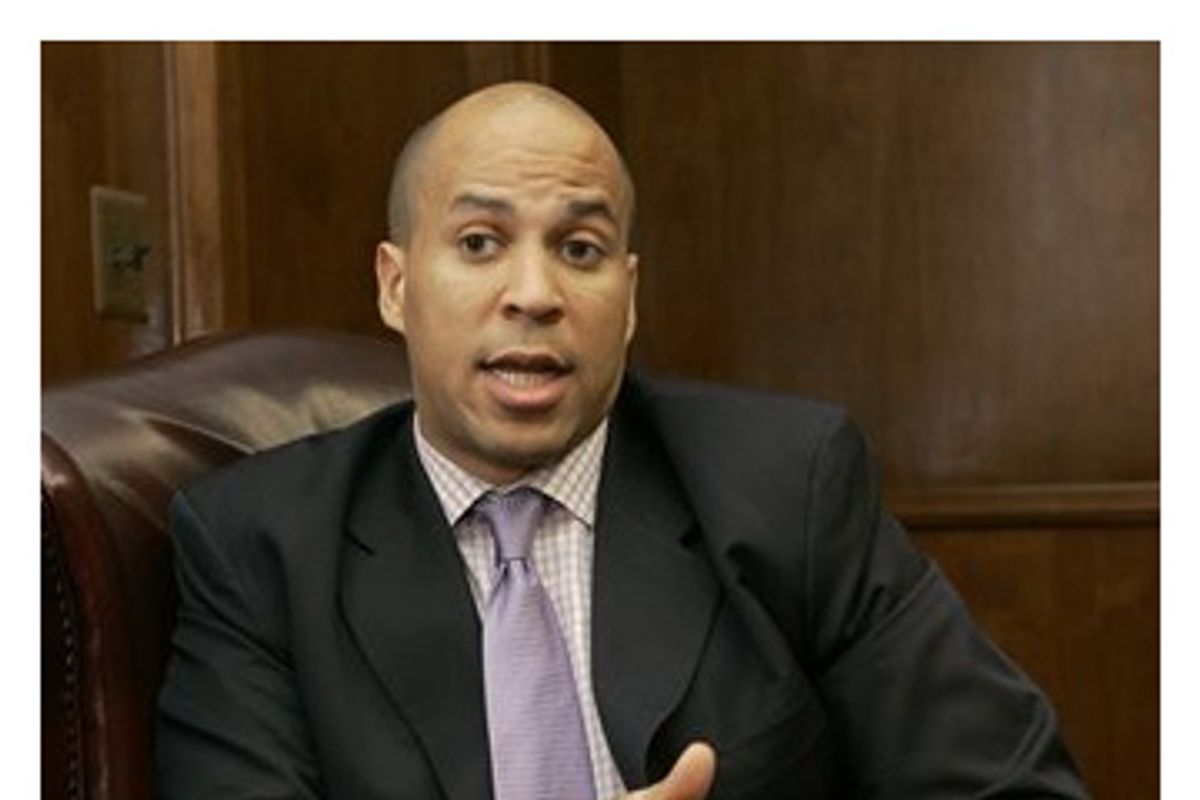 Anger gets a bad rap. It's the universal disguised denunciation ("Why are feminists so angry?"), the wink-and-nudge code word to signal contempt while fronting as pity for the deranged. That label gives those at whom the anger is directed a get-out-of-jail-free card to abandon the debate since anger is, in one fell swoop, deemed irrational. Neat trick that, changing the subject from the offense that provoked the response to a feigned disgust over the angry person's "unseemly" behavior.

Here's hoping that Newark, N.J., Mayor Cory Booker holds onto his newfound rage over his city's crime rates. A recent column in the Newark Star-Ledger lays out the stark reality that has turned this Zen-y, post-race, teetotaling philosopher, Rhodes scholar, Stanford football star and Yale Law grad into Martin Luther King Jr. If he doesn't see progress soon, we may be heading for Malcom X territory. A year into his mayoralty, Booker's million and one grad school-infused plans to save Newark have come to naught and will continue to do so as long as the war on drugs remains a war on the urban poor.

Booker staked his campaign on making Newark safe, yet the city's as dangerous as it ever was. Its tally of 105 murders last year is the highest in 10 years. But that die was cast long before he nailed his shiny diplomas to his office wall, because New Jersey's urban and crime policies are designed to keep Newark an enclave of despair, violence and race-based underachievement. Drugs remain about the only game in town for an urban poor denied entree to the legit life. And, once in the drug life, talk about cutthroat competition; dealers are ruthlessly assassinating each other, up close and personal. The only good news is the decrease in random killings. The number of people hit by gunfire is down 31 percent -- people who aren't drug dealers, that is.

What do we expect as a society, when we fail to educate and embrace "the usual suspects" and send them out into this brutal economy with no way to make an honest living? What's more, once they've fallen into that trap, we do everything possible to ensure they'll have to repeat the pattern. Cherry on top? The millions that the Halliburtons of America make off the prison-industrial complex. I'm not one given to easy racial tropes, but prisons are indeed the new plantations. New Jersey spends a billion dollars a year on prisons, one-third of which are filled with nonviolent offenders, our nation's highest rate.

Not surprising, considering that the entire city (save the airport) is within a school drug zone, which means that illegal drug activity in the area carries a mandatory minimum of three years' incarceration. According to Star-Ledger columnist Tom Moran, 96 percent of those so sentenced are black or Hispanic, though virtually none of the drugs in question were sold to children. Even so, the state Legislature voted down a proposal to shrink the school zones from 1,000 feet to 200 feet, offering instead proposals to make the mandatory penalties, already among the nation's toughest, tougher still. It also refuses to fund more than token levels of drug treatment or sentencing alternatives for the nonviolent, with predictable results.

A staggering 1,500 state cons are released back to Newark each year. One thousand of them will end up back on lockdown, probably on drug charges, within three years. In between prison stays, the state's post-release restrictions on employment (or basic adult necessities like, say, getting a driver's license) are among the nation's most draconian. Given the underperforming schools most in this group attended, it's a wonder we don't just round them up, à la the hapless Baghdad-cabby-and-tea-shop guys of our war on terror raids, and lock them all in conveniently located Gitmos.

In tracing the arc of Booker's road to rage, columnist Moran noted, "At a time when even states like Texas are changing course, we are sticking with our failed strategy." Booker told Moran that he was willing to go to jail himself to change things. "I'm going to battle on this," the mayor said. "We're going to start doing it the gentlemanly way. And then we're going to do the civil disobedience way. Because this is absurd ... I'm talking about marches. I'm talking about sit-ins at the state capital. I'm talking about whatever it takes."

Booker's right. It's time to let America know that we're mad as hell and we're not going to take it anymore. Urban policy, in most of America and especially in Newark, is what we GIs called a self-licking ice cream cone: It exists only for its own satisfaction and benefits no one but itself. This is a reality that dreamy-eyed young leaders like Cory Booker are learning the hard way. Let no one say that he didn't try to work within the system. Now, the same energy he put into genteelly lobbying Trenton politicians with pie charts and spreadsheets must now take to the streets. No justice, no peace.