Republicans facing lousy polls now embrace the Iraq Study Group report. But do they know it advocates a radical break from Bush's policies? 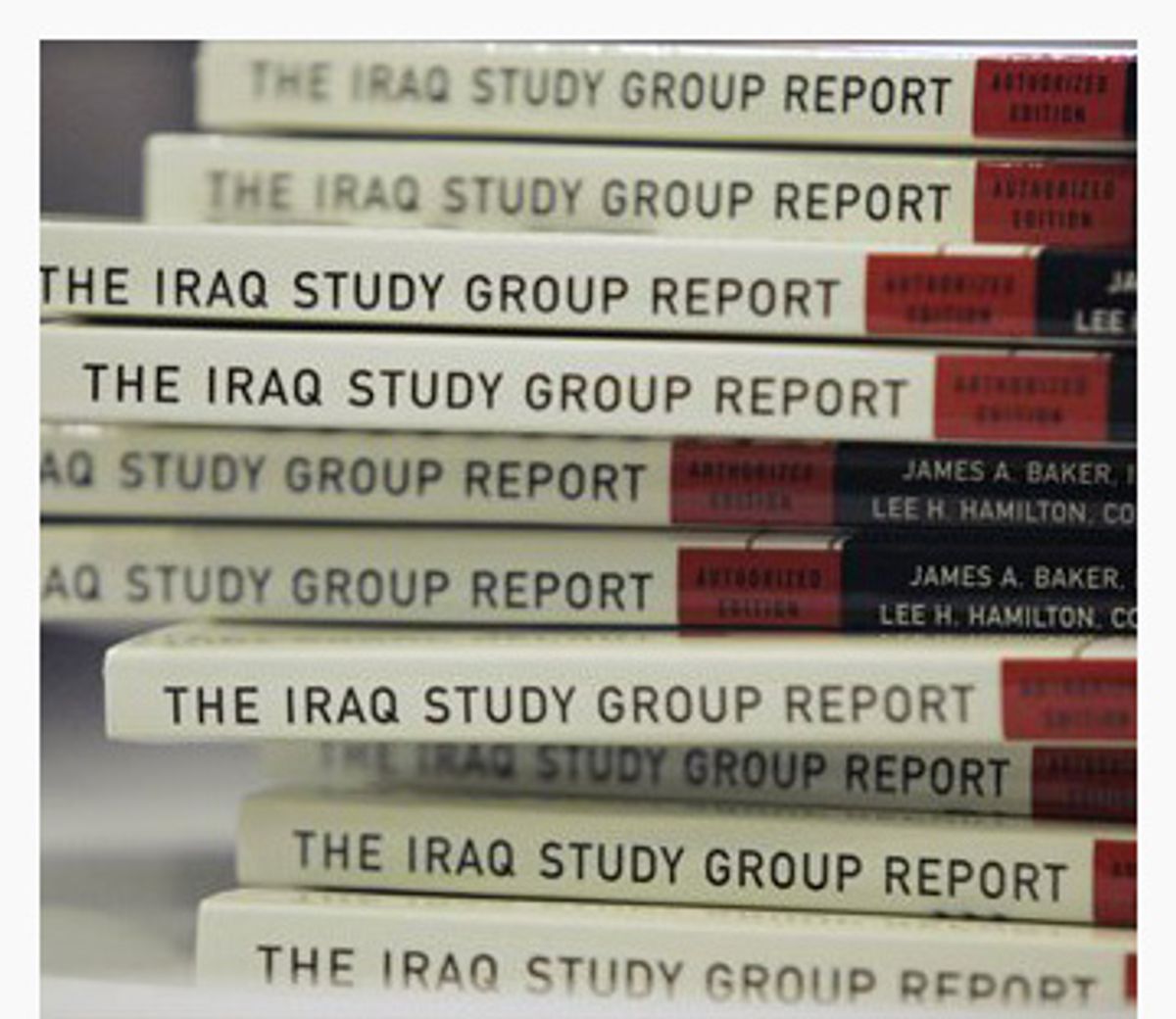 It was predictable that endangered Republicans in the Senate, fearing punishment by angry Americans for their complicity in the Iraq war, would seek to escape the political vortex created by the sinking Bush administration. They gaze upon the abandoned shipwreck of the once invincible presidential campaign of their colleague John McCain, and suddenly realize that they too can no longer ignore the grim message of the pollsters.

Even entrenched figures such as Pete Domenici, R-N.M., with decades of seniority, know they can no longer continue to support President Bush's escalation and expect to be reelected. At a press conference Domenici held the other day to announce that he has changed his mind about the war, he said that his decision had been influenced by talking with New Mexico voters who have lost family members in Iraq. (Domenici's term expires next year, and he has not yet declared whether he will run for another. The long-time senator's popularity has been tainted by his role in the U.S. attorneys scandal.) With that semi-candid confession, Domenici joined a growing list of Republican senators who will no longer conceal their doubts about the "surge" of U.S. troops in Baghdad and the direction of American policy.

But the survival instincts of these politicians -- all eager war enthusiasts when the war still seemed popular -- are of less interest than their survival strategies. To save their seats, several of the most endangered Republican senators have suddenly discovered the virtues of the Iraq Study Group's report issued last December. This too was predictable, especially because the Senate Democrats lacked the wit to adopt the bipartisan ISG recommendations for regional diplomacy and negotiated withdrawal and against military escalation.

Actually, not all of the Senate Democrats have failed to understand the ISG's virtues. The author and chief sponsor of S. 1545, a bill that would implement the ISG report's recommendations, happens to be Colorado Democrat Ken Salazar. More telling, however, is that his Republican cosponsors include several of the most vulnerable incumbents facing reelection in 2008, notably Susan Collins of Maine, John Sununu of New Hampshire, and now Domenici. (The initial cosponsor was Lamar Alexander of Tennessee, often mocked since his disastrous presidential campaign but in fact no fool; he too must run next year and probably saw the potential threat from an antiwar opponent sooner than the others.)

For these senators, the attraction of the ISG report lies in the obvious purpose originally conceived, if not stated by, co-chairmen James Baker III and Lee Hamilton -- namely, to provide a face-saving exit from Iraq for the president, who publicly rejected their effort. By emphasizing negotiations and rejecting any "military solution," without stating a withdrawal date, the ISG allows former hawks to urge an end to U.S. involvement while preserving their dignity. That is, of course, why the Democrats should have claimed ownership as soon as Bush snubbed the report. Had they done so, they would be much closer to assembling an unbeatable majority against the war today.

Just as intriguing as the political revival of the Iraq Study Group is the question of whether its new advocates understand its recommendations. Back in 2002, many senators voted for the war without reading the intelligence estimates on Iraq's supposed arsenal of forbidden weapons. How many of them have bothered to read the ISG report's hundred-plus pages? Those who have not might be surprised to learn that although it doesn't promote a specific timetable for ending U.S. involvement, it urges a radical break from Bush policy.

The report explicitly demands that the U.S. and Iraqi governments sit down with their armed opponents to discuss all relevant issues -- most notably including a date for the withdrawal of American troops. Among its most startling recommendations for the steps the Bush administration can take to assist in Iraq's reconciliation is a negotiated approach to the redeployment of American forces.

"The question of the future US force presence must be on the table for discussion as the national reconciliation dialogue takes place," says Recommendation 34. "Its inclusion will increase the likelihood of participation by insurgents and militia leaders, and thereby increase the possibilities for success." To encourage such talks with various insurgent groups (and neighboring states such as Iran and Syria), the United States should emphasize that "successful national reconciliation dialogue will advance that departure date."

As the report goes on to explain: "Violence cannot end unless dialogue begins, and the dialogue must involve those who wield power, not simply those who hold political office. The United States must try to talk directly to Grand Ayatollah Sistani [the most revered Shiite leader] ... The United States must also try to talk directly to Moqtada al-Sadr [the Mahdi Army warlord], to militia leaders, and to [Sunni] insurgent leaders."

The ISG uses the same imperative tone in urging the United States and Iraqi governments to support another radical measure that is not mentioned in S. 1545 but is included in the "comprehensive set of recommendations" endorsed by the bill -- a wide-ranging amnesty for insurgents (except those affiliated with al-Qaida). Although "politically unpopular" in the United States, according to the report, "amnesty is essential if progress is to take place. Iraqi leaders need to be certain that they have US support as they move forward with this critical element of national reconciliation."

In short, the Republican cosponsors of S. 1545 are so determined to repudiate the failing Bush policies that they have implicitly endorsed negotiations with the enemy and amnesty for the insurgents.

Of course, the ISG report is not a blueprint for immediate redeployment, as many Democrats would wish. When the report was issued last winter, however, it represented a useful bipartisan alternative to the continuing escalation and permanent war policies of the Bush administration -- and it would have led inexorably to the withdrawal of U.S. forces from Iraq. It still does, and it still would. Unfortunately, more than six months and many deaths later, only the most desperate Republicans and the most conservative Democrats are able to recognize a political exit strategy when they see one.