Looking back at Lady Bird

Hillary Clinton, Helen Thomas, Mike Douglas and others remember the integrity, warmth and kindness of the former first lady. 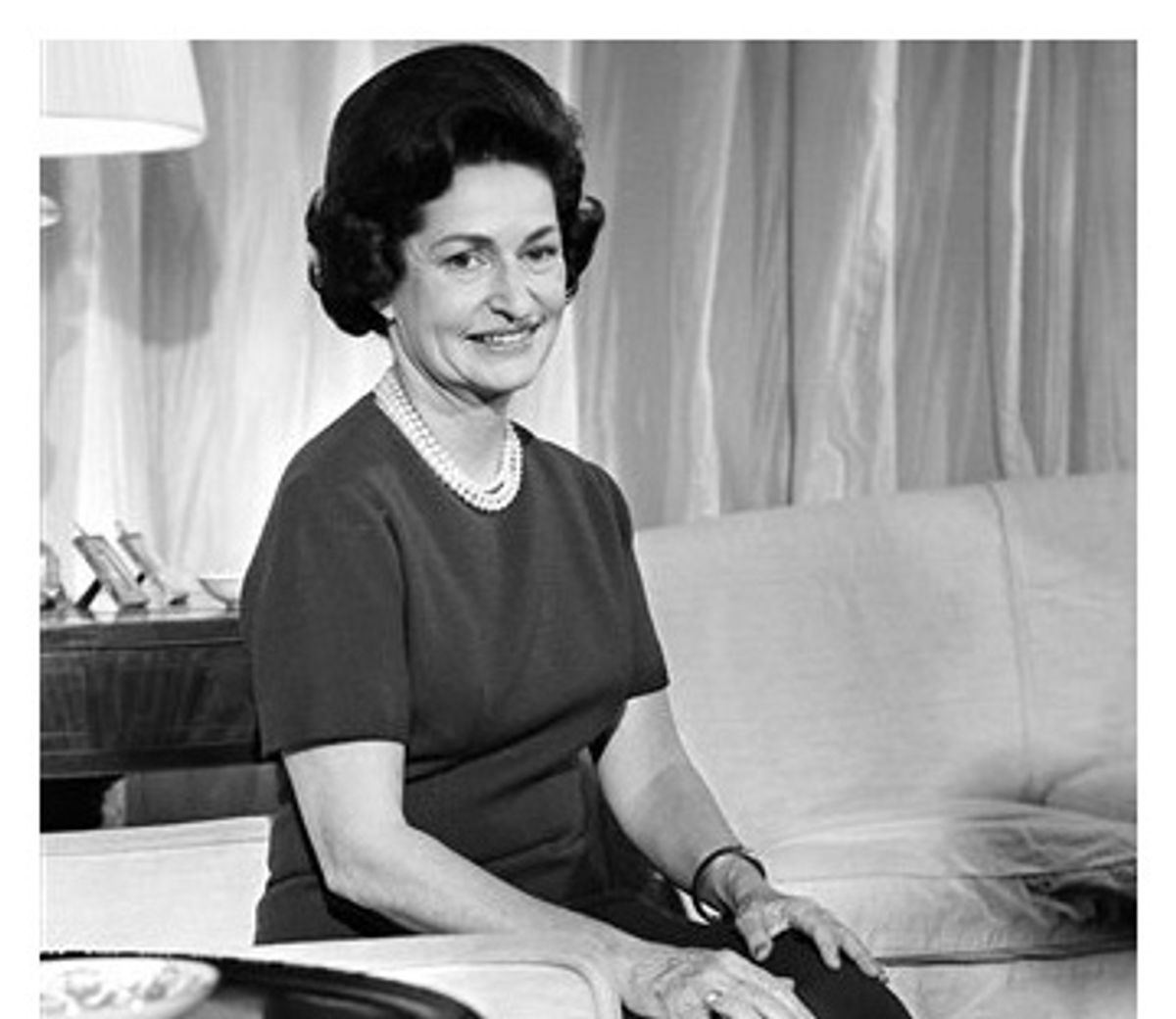 I remember running into her in a Los Angeles hotel in 1960 when LBJ was one of the many contenders for the Democratic nomination. With all the hubbub and mad dashing going on around her, she had decided to take her daughter to an afternoon movie...

After Kennedy won the nomination, negotiations began to get LBJ to take second place on the ticket. Speaker Sam Rayburn acted as go-between and eventually gave up his opposition to LBJ taking the second spot. Not Lady Bird. As pols ran in and out of their suite through the long night, she repeatedly told Lyndon he would be letting his Texas friends down if he accepted the number two spot...

We had more access, and not only at the Texas ranch. When Lady Bird launched her historic "beautify America" project, we all got to go along for the ride. And what a wild ride it was.

Let me say for the record that my idea of a "nature hike" is a ten-minute walk, maybe, through some carefully landscaped gardens. Lady Bird had other ideas. I probably never was in better physical shape than when Lady Bird was around. We logged over 100,000 miles on those beautification trips with this "secretary of the exterior."

Lady Bird was one of the most remarkable women ever to grace the White House. Her integrity and understanding, along with tolerance and compassion have been constants in her life. Although her experiences seem inextricably entwined with her husband's, she cut her own path. Her beautification efforts continue today, helped with her creation of the National Wildflower Center near Austin.

From "Front Row at the White House: My Life and Times," by Helen Thomas (Lisa Drew Book/Scribner, 1991)

You know, whenever a First Lady is in the audience, all heads are turned toward her. For instance, when Lady Bird came, she must have known this because she wore long white gloves and, after the first song, both of her arms shot straight up, clapping as high as she could. To us onstage it looked like a grand gesture of "I approve of this show." She threw the attention off her and onto the stage. We treasured her for it. It worked! She let them know where they should be looking...

Lady Bird has always been my role model. You'd think it would show more on me, wouldn't you? I try, but I'll never make it. I can only appreciate her sensitive aristocracy. Before the final Dolly performance in Austin, she came in with her own hand-picked wildflowers to give me and to chat because we do that from time to time, I'm proud to tell you. This time she said, "May I ask, do you have grandchildren?"

"No, dear Lady Bird, I don't want to push and aggravate either of them."

She said, "Push! I would say poo oosh! Do that, please." She said it so intimately, slowly, and sweetly that I knew she simply wanted me to be happy and have a full life. (mid-1960s)

Against the better judgment of my mother who wished that I, like Robert Lowell, had taken an open stand against Vietnam, I accepted the gold engraved invitation to Washington.

Of the four hundred guests at the Festival of Arts -- a first gesture of this kind by our current administration -- I was, quaintly enough, the only long-haired composer...

Mrs. Johnson, the First Lady (this nomenclature was the sole bow to formality), greeted us individually in Southern tones beneath a barrage of flashbulbs. Faithfully she smiled all day, disappearing only at five to change from dark blue print into pale blue sequins. She's younger, prettier than her pictures.

In the East Room she first introduced the writers who read for an hour, and only [John] Hersey caused a stir, handsomely, in a no-nonsense reference to "wars have a way of getting out of hand," quoted by noon in Washington headlines. (1965)

Mrs. Lyndon, when I interviewed her [for the Toronto Star], was of a distinctly different breed from either [Pat Nixon or Nancy Reagan]. Ladybird, which has to be the most incredible nickname for any American president's wife, was shrewd, affable, but never friendly to the point of gush, as Mrs. Nixon sometimes seemed to be...

Ladybird knew exactly where she was going and what she was doing. Her experience as a radio-station owner and in other business ventures had given her an executive approach to her job as wife of the president of the United States. She was competently organized, down to the last touch of lipstick and faultless hairdo. I suspect she is one of those rare women who carry uncluttered and well-ordered handbags. (Washington, D.C., mid-1960s)

[I went] to dinner at the White House, a formal dinner for the Irish ambassador, with music and dancing afterward in the Gold Room...

For me, the highlight of the evening was the receiving line. President Johnson greeted us with Texas congeniality and Lady Bird endeared herself to us forever with her warmth and kindness. As we approached, she opened her arms in welcome. "Ah, at last, a familiar face," she said. We had never met, but she felt she knew me well enough from the show ["The Mike Douglas Show"] to embrace me as a friend. I'll never forget her brief words or sincere hug. (Washington, D.C., mid-1960s)

With the help of Lady Bird Johnson and the Texas Highway Department, we started our own Georgia Highway Wildflower Program. The Texas program is famous, and I wanted to know more about it. With an offer of funds from an anonymous donor toward a highway beautification project, I joined other members from our state Garden Club on a trip to see Mrs. Johnson at the LBJ Ranch. We flew to Texas in a small state plane and landed on the strip just behind her house, where she welcomed us in her friendly, charming way... (1970)

From "First Lady From Plains," by Rosalynn Carter (Houghton Mifflin, 1984)

I joined five former First Ladies at the National Garden Gala. I was the honorary Chair of the event at the U.S. Botanic Garden to help raise funds to construct a new garden that would be a living landmark on the Mall dedicated to eight contemporary First Ladies and honoring our contributions to the nation.

I was delighted that Lady Bird Johnson was able to attend. She and I wrote each other during my years in the White House, and she was a comforting and affirming correspondent. I admired the quiet strength and grace she had brought to her position as First Lady. She began a beautification program that spread wildflowers along thousands of miles of U.S. highways and enhanced our appreciation of the natural landscape. Through Lady Bird's advocacy, a generation of Americans learned new respect for the environment and were inspired to preserve it. She also championed Head Start, the early learning program for disadvantaged children. (Washington, D.C., 1994)