The city of brotherly losers

After 9,999 defeats, baseball's Philadelphia Phillies boast the worst sports record since the Christians played the lions. 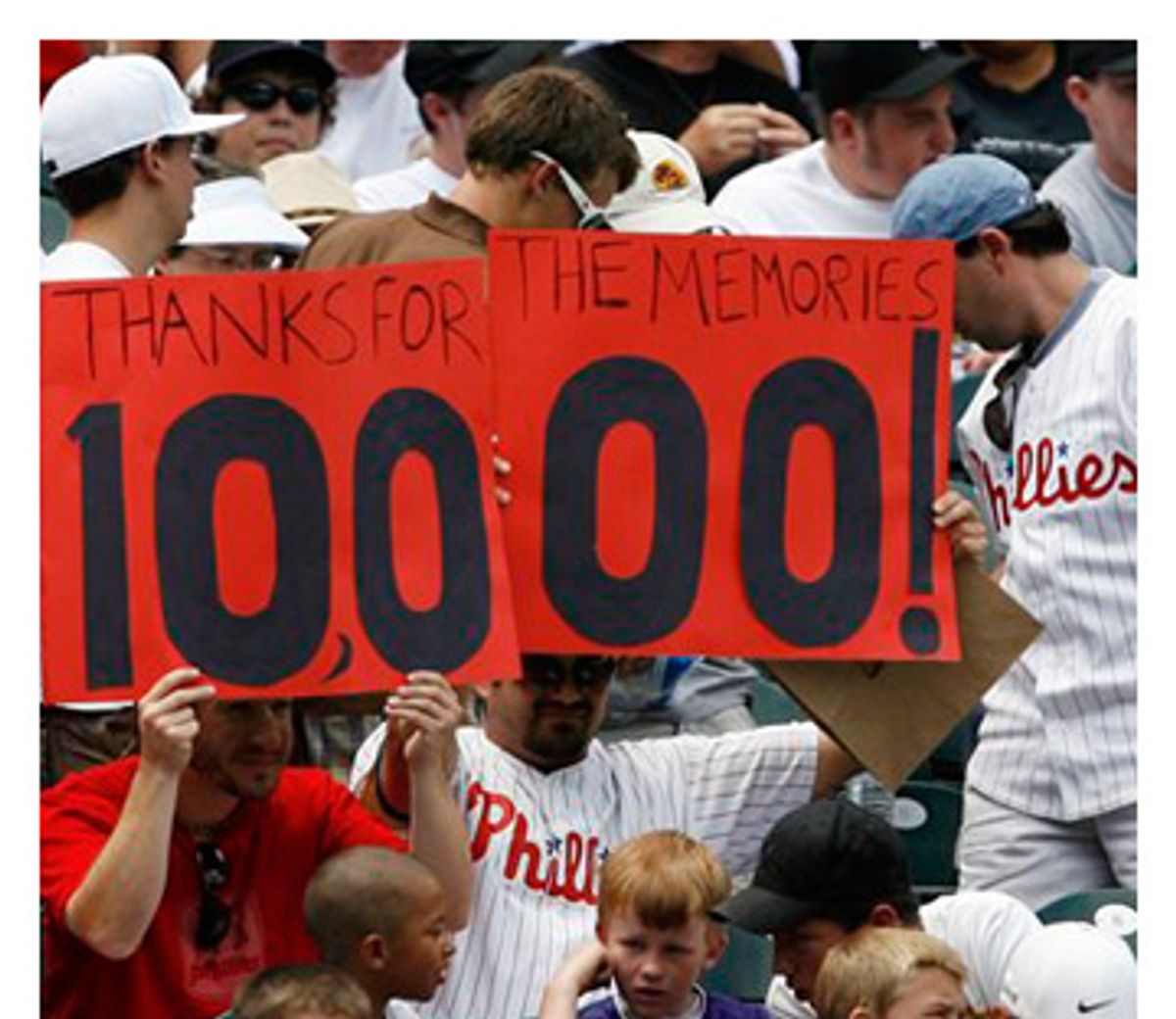 Any day now -- barring a perverse and unprecedented winning streak -- the Philadelphia Phillies will become the first professional franchise in any sport in any land to reach 10,000 losses. Perched at 9,999, the Phillies' next loss against the Cards this weekend at home, or the Dodgers in L.A. next week, will put them alone at the zenith of Mt. Futility.

You'd think the Cubs would have been a lock to reach 10,000 first. Or maybe the Red Sox. They have been the most celebrated losers of the last century. But no, the Fightin' Phils are even losers at being lovable in defeat. They have earned neither sympathy nor infamy whilst trudging to the top of the mountain of losses. With the scoreboard reading 9,999, let the celebration of ignominy commence.

That they have accomplished this feat so unspectacularly -- without the romance of the underdog Cubbies or the heaving dramatics of the Red Sox -- might explain, in part, why cynicism envelops the City of Brotherly Love and how its fans have become the premiere boo-birds in America. Booing your home team, in addition to your opponents, is the only surefire method of mastering the art of the boo.

Philly fans have not exactly endeared themselves to the sporting world. They are vitriolic and demonstrative, and turn spectatorship into participation; in this birthplace of American democracy, everyone gets his own soapbox. (In the winter, his own snowball, too, but the pelting of Santa at a Philadelphia Eagles game is another story, best told at Christmas.) A thick skin has evolved over the years to cover deep insecurities and a throbbing pulse of frustration. Philly fans blame no curse, no karmic force, no goat, no Babe, no "No No Nanette."

A simple formula, you'd think, but by no means foolproof. The misbegotten Phillies have succeeded at losing so many games without any blueprint, without any intention to fail. They start out each season with the goal of winning more contests than they lose. They have succeeded in this quest less than 50 times in their 124-year history. (This year's team boasts the blandest record imaginable -- 44 wins and 44 losses -- good for a middle-of-the-pack third place in the National League's Eastern Division.)

It started badly and got worse.

Their first season, 1883, ended with 17 wins and 81 losses. Fans thought it was a fluke. A decade later found the Phils winning 52 games and losing 100. Fans were catching on. From 1918 to 1948, when baseball was the unquestioned national pastime, the Phils had losing records in all but one campaign. Fans' expectations were scaled down. Alcohol intake was on the upswing. Hard lessons were being learned: Winning is not a naturally occurring phenomenon in Philly. Consistency breeds contempt. And dyspepsia. Maybe ulcers. The bottling up of emotions compounded psychic turmoil, so fans taught their offspring, the baby boo-birds, to sing out their scorn.

From 1951 to 1975, the Phillies finished higher than third place only twice. The Whiz Kids won the pennant in 1950 and naturally lost the World Series in four straight. That the Phillies had no black players until 1957 -- a decade after Jackie Robinson broke the baseball color line -- was surely a factor. And no accident. The Phils were white by design and terrible as a consequence. How bad? After the first game of the 1960 season, manager Eddie Sawyer called a press conference to say, "I'm 49 and I want to live to be 50." He packed his bags and disappeared. The next season, the Phillies were an astounding 47 and 107.

Losing was an unavoidable part of the life cycle. As summer follows spring, as winter follows autumn. Only in Philly, it's always a brutal summer that followed an anxious spring, and a brutal winter that followed an abbreviated, colorless fall. ("Brutal" is the most uttered two-syllable word in Philadelphia.) As other American citizens (New Yorkers mostly) had to learn that you can't win 'em all, Philadelphians understood, and took heart in the fact, that you can't lose 'em all. Until 1961, that is, when the Phils did indeed lose 23 games in a row, establishing a still unbroken modern major league record for uninterrupted failure.

The Phillies didn't really enter the modern era, however, till Dick Allen -- an angry black man with an angry bat -- arrived at third base late in the 1963 season. Allen was on his way to both Rookie of the Year and MVP awards in 1964 when the Phils stunned the city, and the baseball universe, by losing 10 games in a row in September -- thereby blowing an unblowable lead in a most brutal fashion. The city has never been the same. Hyperbole? Yo, cuz, you weren't there!

The '70s and '80s were heavenly. Five division titles, and, in 1980, their 98th season, the Phillies finally won their first World Series. To put that into perspective, the upstart Florida Marlins and Arizona Diamondbacks have won three World Championships between them in a total of 21 seasons of existence.

After a drought, the Phillies won another pennant in 1993, only to lose to the Toronto Blue Jays in the World Series on a brutal Joe Carter home run in the sixth game. Then the '90s saw a return to normalcy. The Phillies notched a total of 823 losses during the decade, with 1993 their sole winning season.

As it marches toward five digits of defeats, how is the city of Philadelphia dealing with its soon-to-be-newest stigma?

Local Web sites are selling T-shirts and hats and beer mugs with the number 10,000 prominently displayed. If you turn shame inside out, and slap a price on it, you might find pride. Or vice versa. PhillySucks.com is a Web site that tracks the exact seconds, minutes and days since Philly teams won their last championship. The numbers are brutal.

While no sign will be erected at Citizens Bank Park to read: "Over 10,000 Losses," Philadelphians will not shrink from that reality. Given the time and perseverance, other teams will reach the mark -- the Atlanta Braves are only some 300 losses away -- but none but the Phils will ever be first. Which is fitting. They have been the worst franchise in professional sports over the longest span of time, whether you knew it or not.