The White House is foolish not to recognize that the only way out of the Iraq mess now includes serious negotiations with Iran. 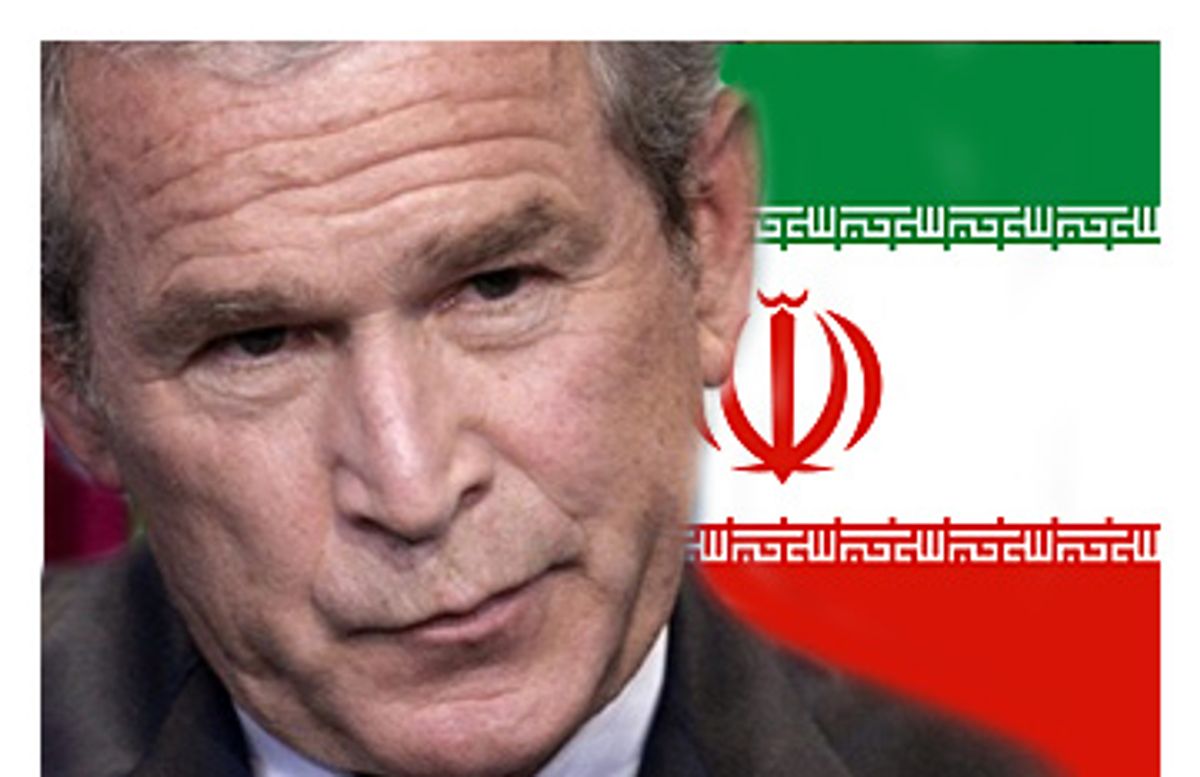 Whenever the issue of an exit strategy for Iraq becomes headline news, as it seems to often in this summer of discontent for George W. Bush, I am reminded of a story from my days in the music business. Legend had it that back in the glory days of payola and illegal and quasi-legal business practices in the 1960s, a young entrepreneur set up shop hoping to cash in on a terrain that seemed to be wide open, little regulated and required no specific skills. A well-known independent record promoter (indeed, it was still called the "record business" then) with ties to an unnamed Italian organization visited this upstart, and suggested that large sums of cash could be paid to ensure radio play for any act that the entrepreneur would market. "How can I be sure that if I pay you my records will get played?" the record promoter pressed. "You're asking yourself the wrong question," was the entrepreneur's reply. "You shouldn't wonder whether your records will get played if you pay me. You should ask yourself whether I can stop your records from being played if you don't." Needless to say, the executive paid, his records got played and he built a successful label.

George W. Bush may well have landed himself in a similar situation with his own entrepreneurial adventure in Iraq. Sure, he's got plenty of resources and muscle, but apparently he doesn't yet see that now he'll have to "pay to play" if he wants to succeed. The price of anything that could remotely be called a victory in Iraq at this point, or at least not a defeat, is negotiating with Iran. And that means being willing to give Iran some of what it wants from us, including, for example, assurance that we're not going to shock and awe Iranians if they simply don't do as they're told. It is foolish for the Bush administration not to negotiate seriously with Iran at this point, thanks to circumstances largely of its own making.

From the beginning of the Iraq war, it was clear that Iran would be a major beneficiary, even if unintentionally, of regime change in Baghdad. The evidence was right there in the open: Almost all the Iraqi opposition groups (nearly all Shia) -- including neocon favorite Ahmad Chalabi -- who would by definition be the heirs to Mesopotamia, were funded, armed and trained by, or spent years in exile in, (Shia) Iran. Iran's enemy to the east, the Taliban, had been vanquished; now her enemy to the west, Saddam, was meeting the same fate. What was there not to understand about Iran's ascendancy, and what would amount to a quiet and costless regional victory for her?

Three and a half years after the start of the war, the Iraq Study Group proposed (in its most "duh" moment) that the U.S. would need to engage Iran in order to stabilize Iraq and find a way out of a mess of its own creation. It was a belated idea that still the Bush administration rejected. A few months later, as it perhaps started to dawn on the White House that the ISG's James Baker and Lee Hamilton had a point, the U.S. agreed to a much ballyhooed meeting with Iran at the ambassadorial level in Baghdad. It was here that the U.S. had the opportunity to ask the right questions, but clearly did not. Instead it essentially reiterated a demand: that Iran stop interfering in, but also help stabilize, Iraq -- a demand undoubtedly fielded by an Iranian negotiating team struggling to suppress their guffaws.

Perhaps out of Persian politesse, or perhaps for more sinister strategic reasons, the Iranians didn't respond to the strong-arming promoters of the U.S. agenda in the way of the upstart entrepreneur. And perhaps they did not need to state the obvious: that the issue was not whether the Iranians could or would help stabilize Iraq, but whether they might choose to destabilize the country further, or sabotage a U.S. exit strategy, if the U.S. was not willing to deal with them and compromise on some key issues. Recently, the Iranians have indicated (with a nudge from the Iraqis, whose president seems to visit Iran as often as he smokes a cigar) that they are willing to sit down with the U.S. again in Baghdad to discuss ways to reduce the bloodshed in Iraq. But it will be a pointless exercise unless the Bush administration is willing to ask the right questions of itself and its adversary.

Iran, squeezed by sanctions and forced to retreat once again into its shell of Islamic revolutionary politics, in reality wants détente with the West. It wants to be a respected member of the international community. For all the bluster of its president, Iran suffers from deepening economic woes -- partly because of government incompetence but also largely because of U.N. and U.S. sanctions that have caused capital flight and put foreign investment in a deep freeze. Iran will not admit it openly, but the ayatollahs who are really in charge are largely pragmatists who would like nothing better than to find a way out of their internal problems. Iran can, if asked diplomatically and given the right incentives, be critical in smoothing the way for U.S. forces to leave Iraq with a smattering of dignity left -- a goal that Congress and the American people appear increasingly keen to realize.

The time has come for the Bush administration to abandon its policy of unilateral preconditions for any wide-reaching negotiations with Iran, and get down to the business of give-and-take, which could potentially resolve Iran's nuclear issue as well as help us out of the mess in Iraq. Iran once before, in 2003, suggested "talking points" for moving forward with comprehensive discussions on all Middle East issues, but the gesture was ridiculed and ignored by the Bush administration in the vainglorious days of "Mission Accomplished." That full range of talking points may not still be on the table (unlike "all options" said to be on the table by those from the warmongering Dick Cheney school), for Iran is in a far stronger negotiating position today. But Iran has indicated enough times that if the U.S. really wants to chat and get down to business, it is ready.

There's every reason to believe that the Iranians will be sincere in negotiations -- it is in their best interest, particularly with President Ahmadinejad under fire from a domestic constituency that is restless for improvement. The same can well be said of the American president; to engage Iran now, Bush has very little left to lose.

The Bush administration insists that the U.S. is also ready to negotiate, but not before Iran lives up to the unilateral precondition that it suspend uranium enrichment. Much as the Bush administration would like to treat the nuclear issue as unrelated -- as evidenced by its willingness to engage with Iran on the issue of Iraq alone, without any preconditions -- the Iranians consider it entirely related in terms of its own security. Iran is unlikely to do much to help the U.S. in Iraq without receiving something significant -- both in terms of its economy and its security -- in return. In the meantime, while George W. Bush continues asking himself, and the Iranians, the wrong question, Iran continues enriching uranium, and Baghdad continues to burn.