The secret life of sperm

The author of a new book on the social history of "baby gravy" discusses sperm in children's books, the frontiers of artificial insemination and how semen became a TV star. 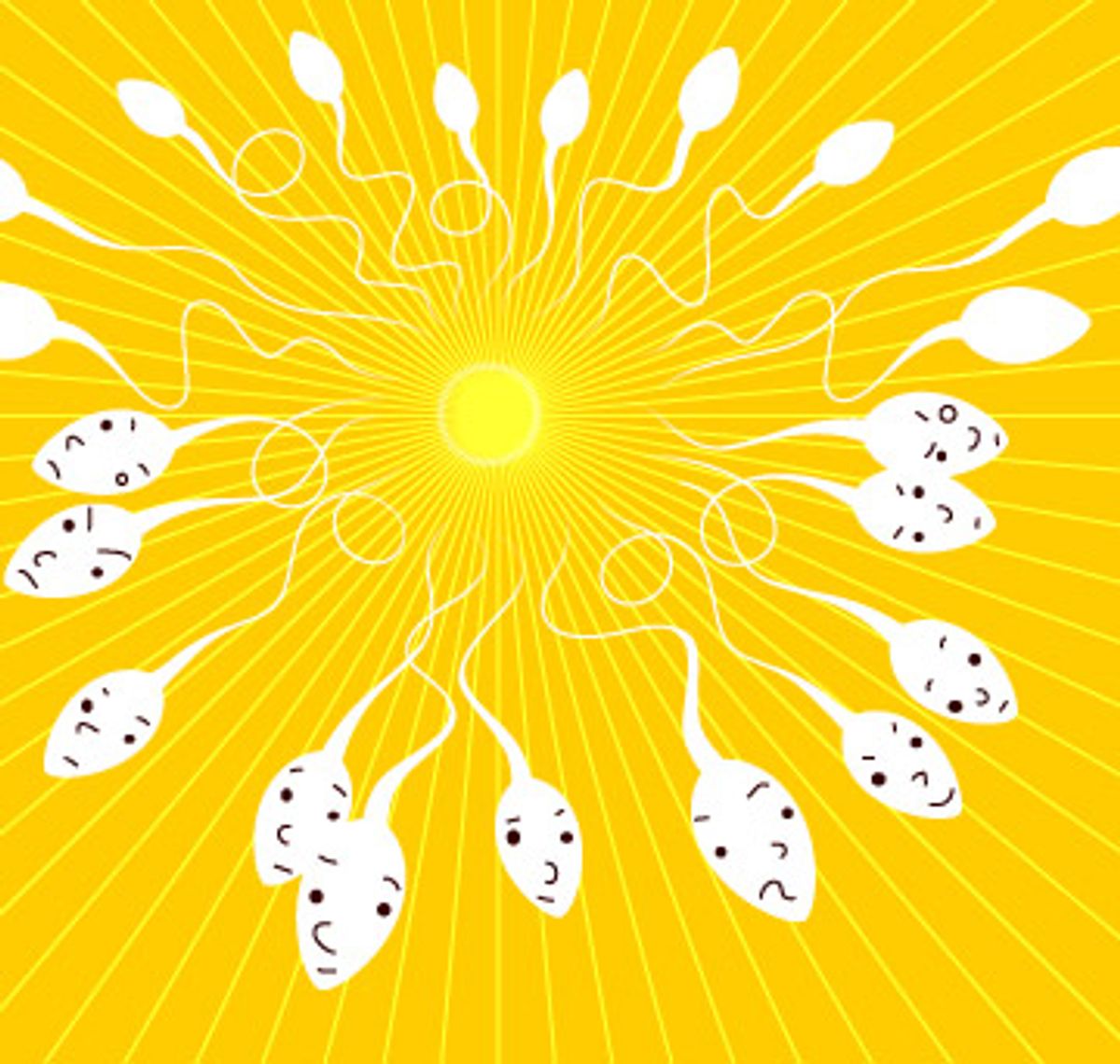 Lisa Jean Moore first learned about sperm when she was 6 or 7 years old. Her mother sat her down on the "entertaining" couch in her family's living room in upstate New York and pulled out "How Babies Are Made," a children's book about reproduction. On the book's pages, small white cells swam cheerfully through the insides of dogs, chickens and people. In each case, sperm wriggled toward a small white egg with simplicity and purpose. She was mesmerized by the image. The book became, as she puts it, Moore's "treasure," stored in a special place for frequent consultation.

In "Sperm Counts: Overcome by Man's Most Precious Fluid," Moore's new book about the cultural meanings of sperm, she tells this story to illustrate her own childhood naiveté about a substance that, as she now sees it, is far from simple. These days, according to Moore, an associate professor of sociology and women's studies at Purchase College, sperm has tremendous cultural meaning -- and looking at it in its many contexts, from children's books to pornography, can tell us a great deal about the skittish state of American masculinity.

"Sperm Counts" is a serious book, and the first on its subject. But it also includes anecdotes from Moore's life, lending it a more conversational tone than most academic works. The book's margins are even squiggled with sketches of sperm -- flip the pages and they swim around. (This is a subject matter, after all, that requires a certain degree of levity.) Moore happily lists spermatic nicknames ("baby gravy," "gentlemen's relish," "pimp juice") before skewering, in a later chapter, the burgeoning home sperm-test industry (sample ad slogan: "I don't know how that semen got in my underwear!").

Moore started investigating the subject when, as a young sociologist, she conducted a study on the promotional literature and donor catalogs of American sperm banks. She has continued her work over the past decade, speaking with sex workers and watching countless hours of crime shows and hardcore pornography. She has also been a board member for San Francisco's Sperm Bank of California, and, as she details in her book, became the mother, with her lesbian partner, of two children conceived through artificial insemination. Salon spoke with Moore over the phone about how semen gets processed, sold and eroticized.

Why do you think that semen is a substance worth studying?

What do you think is wrong with the ways in which kids are taught about sperm in children's books?

Secular children's books want to anthropomorphize these little sperm cells and make them interesting, heroic and exciting, people we would identify with -- kind of like Dr. Seuss characters. They have very masculine personalities, of purpose, competition and aggression. They give sperm qualities that we would want our fathers to have. Just like "Daddy did this for you, the sperm did this for the egg cell." But sperm carries the X or the Y, so technically it's not really he or she.

The narrative is so monolithic. It doesn't say, wow, most sperm cells are in a shape that isn't healthy and most don't swim right, and most don't have tails, and it's actually sort of miraculous that people get pregnant because semen is a highly unpredictable substance. Children's books also create this narrative of children always being wanted, always being planned, always being predicted, and of the sperm cell having some cognition of that. It never bangs into a diaphragm or the back of a condom. It never comes out in the air because the guy is jerking off.

Precisely. It means you're wasting your seed. We get that notion of onanism and the spilled seed even in children's books. Sperm comes out for all these different reasons. Sometimes sperm doesn't come out. Sometimes men don't have sperm. Sometimes mommies go to stores and buy sperm. Sometimes Mommy has a friend and the friend leaves sperm in the kitchen and then Mommy's girlfriend takes the syringe and inseminates Mommy.

So how would you explain insemination to a child?

By showing that there are lots of different ways these cells exist in our bodies. They're invested with different purposes. I think you could say that sometimes people who get pregnant are completely surprised, and wonder if they can take care of a baby. And sometimes people try to get pregnant, but they can't, so they choose other methods.

I actually think that children could understand those ways if you had a creative illustrator or somebody who could speak on their level and was compassionate and understanding of children's needs.

As you mention in the book, it's kind of odd that you're dealing with this topic because, as a lesbian, you only have tangential contact with sperm.

Yeah, isn't it ironic? Obviously I came from sperm and used sperm to have my kids, but it's not like with my heterosexual friends, who have had to manage their relationship with sperm on an interpersonal sexual level. There is this irony; how would I have a lot to say about sperm? But if you were to interview a lot of women who use alternative methods of reproducing, they probably would be experts about sperm, because they would become very savvy market researchers, investigating the different ways of consuming semen for reproductive processes.

Have you ever questioned your personal interest in the topic?

For me, it has to do with an obsession with masculinity. I teach a course on masculinity at Purchase College and, coming out of a vibrant queer community, I just was taught to think and look at gender differently. Semen enabled me both a way to understand sperm as something that I might need to eventually use and marshal for my own reproductive purposes and a way to talk about men and masculinity, not being a man -- though sometimes I'm masculine -- and not producing the essence of manhood myself.

In the book, you tie sperm technologies, like sperm banking and artificial insemination, to a crisis of masculinity. How have these technological changes affected the way that men see themselves?

I want to be careful. I don't want to make it sound like average men are aware of all the technical things that are happening to their physical capabilities. I think it's more of a long-term process that I'm proposing as a theory.

Technology has made sperm so pliable, so knowable, something that can be so sterilized, and so flexibly used, that women can now begin to use it. It can be extracted from male bodies and men can be bypassed in the process of reproduction. [Having] semen available in a marketplace radically changes the definitions of paternity, paternalism and fatherhood, and the fatherhood rights movement is reacting to that. It's finding that incredibly threatening to their ability to maintain notions about the heterosexual-male-dominated family.

In the United Kingdom, researchers recently developed a technique that, by extracting bone marrow and turning it into sperm cells, may allow two women to have a biological child. What did you make of that news?

I've been tracking that story. It started off with them using male bodies, and then six weeks later there was a story that said, Well, we can do this with male bodies, so why can't we do it with female bodies? You could see the hysteria happening: Lesbians can reproduce without men!

This is not a new fear. This is a fear that has followed us throughout history. It's that women are going to become Amazons and take over the world, and take male babies and put them on rocks to be eaten by eagles. We develop these scientific tools; then we're afraid they're going to get in the hands of the wrong people, who are going to create a new social order that is somehow going to destabilize masculinity.

Why do you think there's been such a sluggish attempt to create a male contraceptive?

From my own sense, anything that would have the consequence of men's fertility being potentially damaged for any period of time is distasteful to men. I think that has to do with this notion of sperm competition and with the notion that women are unpredictable and untrustworthy.

When something involves messing with semen, it's not going to fly with men, because I don't think they ultimately trust that things are going to get back to normal. If they look at women's reproductive history with contraception, they should know it probably won't.

Women's bodies have been enormously messed up from reproductive research and faulty contraception. Why would men want to allow that to happen to their bodies, particularly when there are things that, from their perspective, work perfectly well?

At one point in the book you call crime shows like "CSI" "seminal entertainment." What do you mean by that?

They use their goggles, turn off the light and there's just sperm everywhere. [Laughs] You're just like, "Wow! I didn't know that was possible!"

There's crazy scenarios where guys mix their sperm with ketchup and put it in the refrigerator. Part of what's interesting about these shows is the way they mirror children's books. The semen takes on personalities. Having a lot of swimmers means that the rapist is a really strong guy, or having very low sperm count motility means he's really a pervert.

So where did all this sperm visibility come from?

But I think it also [has to do with] this "lesbian baby boom" and the ways in which certain political forces use it as an opportunity to create a wedge. The hysteria about lesbians reproducing, the hysteria about women being able to reproduce from their own bone marrow -- I think that those things have always been around in our culture, but they reach fever pitches depending on what's happening geopolitically.

How important was the Bill Clinton-Monica Lewinsky scandal for bringing sperm out into the open?

I think this notion of the semen-stained blue dress and how horrible that was for our children to see and hear about because of the Kenneth Starr report -- it was a high point for sperm because it linked back to a president, and it was the beginning of knowing, and thinking, "Oh shit, what am I going to do now?"

Many, many men have cheated on many, many women in highly political positions, but it wasn't until very recently you could keep the evidence -- not have it dry-cleaned and then, through the encouragement of another friend, have it tested at a lab. With Clinton that was new. These crazy critters are out of control! It used to be: "I can't keep my dick in my pants." Now it's: "I can't keep my body inside itself." [Laughs]

You also write about the emergence of a new kind of pornography. Can you explain that?

This gonzo pornography that exists now, of women drinking sperm out of shot glasses, that's probably happened over the past five to seven years.

The money shot has changed. It's no longer the moment of a man ejaculating on a woman's body or in her face or in her hair. Now it's men ejaculating into a cup or into some object that can then be highlighted, looked at and valued, and then, from there, the ingestion can happen. The point of ecstasy is both the release and the witnessing of somebody wanting something so much that they need it right then.

I think that that is about men wanting to get back to this organic sense that someone would love you so much that they wouldn't want to process you.

Like you say in the book, men want women to want their semen.