"I Now Pronounce You Chuck and Larry"

Adam Sandler and Kevin James play faux-gay Brooklyn firefighters in a comedy that's about as subtle as a face full of firehose. 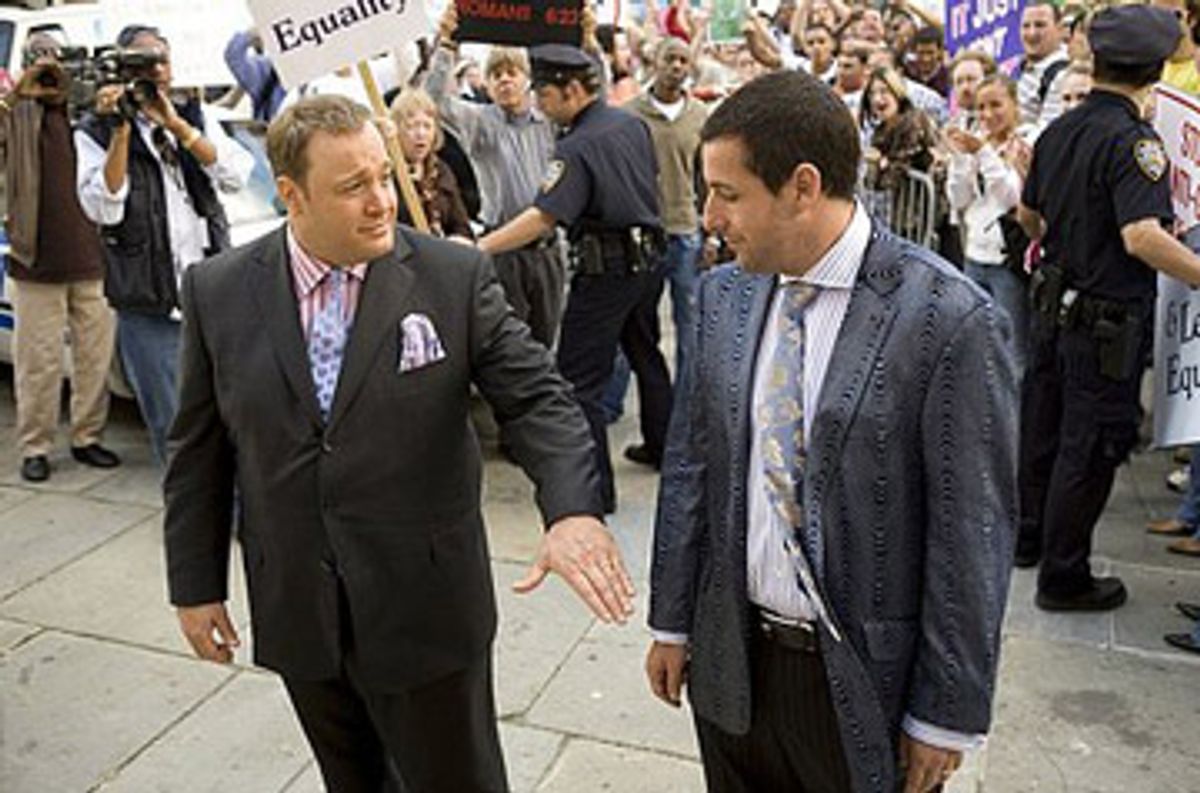 "I Now Pronounce You Chuck and Larry" works hard at not being offensive. It just doesn't work hard enough at being good. Larry Valentine (Kevin James) and Chuck Levine (Adam Sandler) are Brooklyn, N.Y., firemen who pretend to be a gay couple in order to receive domestic-partnership benefits. This is particularly important for the widowed Larry: Because of a paperwork glitch, he's unable to make his two young children the beneficiary of his pension. If he takes a partner -- that would be his co-worker and best friend, Chuck, whose life he has also just saved -- he won't have to worry about his children's welfare should anything happen to him. Chuck -- the kind of guy who routinely sleeps with six cheerleaders at once, because, well, why not? -- doesn't like the idea at first but eventually obliges.

What follows might have been a convenient repository for lots of cheap gay-themed jokes, a way of allowing the more macho constituents of Adam Sandler's considerable fan base to laugh at gay men without feeling that their own latent (or even overt) homophobia had been challenged. But no matter how crass and clueless the trailers make it look, "I Now Pronounce You Chuck and Larry" is something sweeter, and quite a bit messier, than I expected. Many of the jokes simply fall flat: Here's Sandler's Chuck being confronted by his very angry, very buxom girlfriend after he's slept with her identical twin; here's James' Larry making a giant bowl of spaghetti for his kids, slapping a few uncooked meat patties on top for protein. I don't think I laughed at all during the movie's first 30 minutes, and later I did so only grudgingly. James' sly comic timing is a bit wasted here, although he manages to slip through with his dignity intact; Sandler's delivery is funniest when it's tossed-off, casual -- which isn't often enough. The picture creeps along in a way that feels both forced and tentative, as if director Dennis Dugan, his cast and his writers (Barry Fanaro, Alexander Payne and Jim Taylor, from a treatment by Lew Gallo) couldn't decide if they wanted to make a mainstream movie with a progressive message, or a progressive movie that would play safely to the mainstream. The picture they've made seesaws uncertainly between the two.

Then again, the fact that it seesaws is at least something. "I Now Pronounce You Chuck and Larry" includes a number of jokes about Chuck and Larry being afraid to kiss or to express affection physically; and it does poke a bit of fun at one of Larry's kids (played by a wily young actor named Cole Morgen), who's more interested in tap-dancing and show music than he is in Little League (although I didn't find any of those jokes particularly cruel). But even in the midst of all the dumb jokes -- even wafting around the really dumb ones involving the admittedly magnificent breasts of Chuck and Larry's lawyer, and Chuck's love interest, played by Jessica Biel -- is a spirit of earnest inclusiveness. In fact, I suspect "I Now Pronounce You Chuck and Larry" is less a comedy than a sincere if sometimes heavy-handed brief for the necessity of legalizing gay marriage.

Which may be why it isn't very funny. The movie's best moments are the ones that take you by surprise: Chuck and Larry head to Las Vegas for a quickie marriage, and as they discuss their impending nuptials in the back seat of a taxicab -- they're half-joking and half-serious about the degree of affection they feel for one another -- the driver (played by Dugan himself) mutters under his breath, "Queers." Defensively, Chuck and Larry jump on him, clearly not because they're insulted by the fact that he believes they're gay, but because in their eyes he's a creep who wouldn't accept them if they were gay. Later, in a "Mr. Smith Goes to Washington" moment, Chuck addresses a crowded courtroom, explaining to the gathered yobbos that the word "faggot" is an insult. He admits he's used it himself way too often in the past, but he knows better now, and he wants them to see the light, too. "It's like 'kike' for me," he explains, and the bluntness of that particular word hits surprisingly hard.

Many of the gags in "I Now Pronounce You Chuck and Larry" are a little too "Some of my best friends are gay" to be particularly smart. Still, there is something at least vaguely amusing about the way Chuck, while shopping with Larry for toiletry items that will make them seem more authentically gay in the eyes of the state inspector who's trying to "out" them (played, with slimy officiousness, by Steve Buscemi), muses aloud about the value of Q-tips to gay men: "Gay guys like the clean ears, for the licking and whatnot." This murmured remark at least shows an attempt to stand, just for a moment, in another man's shower flip-flops. "I Now Pronounce You Chuck and Larry," with its tepid gags and faltering pacing, may not be a very good movie. But at least, within its clumsiness, it strives for some kind of solidarity.