When the most belligerent Republicans start to beat the war drums, it's important to look at what they're trying to hide. 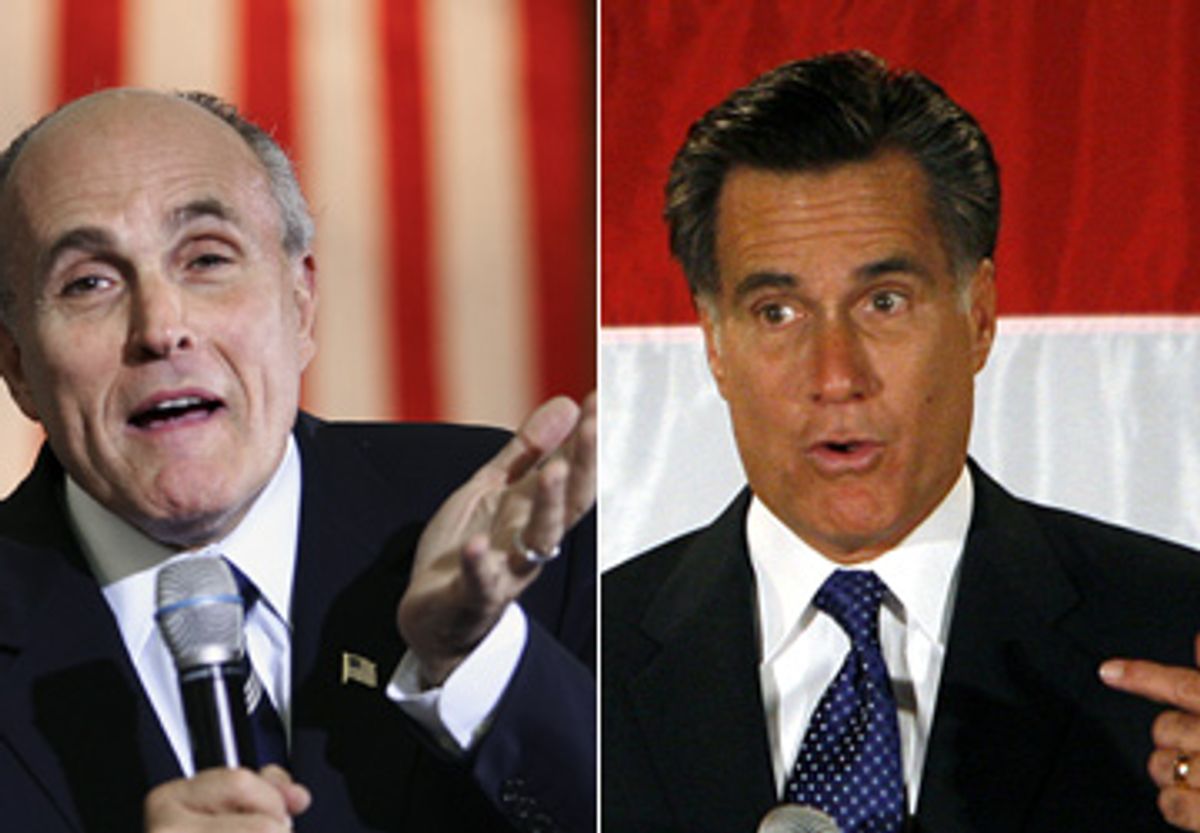 Nothing unites the Republican candidates for president or excites the conservative base more than their bellicose barking about war and confrontation. The GOP presidential debates often sound like a tough-man competition, with Rudolph Giuliani denouncing the "cut-and-run" Democrats, Mitt Romney demanding a double-size Guantánamo detention camp, and the rest of the pack struggling to keep pace with the snarling alpha dogs.

Yet while their rhetoric is invariably loud and aggressive, none of these martial orators has seen a day of military service -- except for John McCain, whose prospects are rapidly deflating, and Duncan Hunter, whose campaign never got enough air for a single balloon. Unfortunately for those two decorated veterans, their party seems to prefer its hawks to be of the chicken variety.

None of this may matter much. Most of the Democratic candidates lack military experience, too. But when the most belligerent Republicans start to beat the war drums, it's important to look at what they're trying to hide.

Consider Giuliani, the former New York mayor who has remained among the most vocal supporters of the invasion and occupation of Iraq. He never hesitates to suggest that politicians with differing opinions simply lack guts. When he spoke at the 2004 Republican convention, he gleefully insinuated that Democratic nominee John Kerry lacked the fortitude to combat terrorism. Now he denigrates the supposedly spineless Democrats running for president in 2008.

But he has always confined his enthusiasm for war to podium speeches and position papers. Born in 1944, young Rudy was highly eligible for military service when he reached his 20s during the Vietnam War. He did not volunteer for combat -- as Kerry did -- and instead found a highly creative way to dodge the draft.

During his years as an undergraduate at Manhattan College and then at New York University Law School, Giuliani qualified for a student deferment. Upon graduation from law school in 1968, he lost that temporary deferment and his draft status reverted to 1-A, the designation awarded to those most qualified for induction into the Army.

At the same time, Giuliani won a clerkship with federal Judge Lloyd McMahon in the fabled Southern District of New York, where he would become the United States attorney. He naturally had no desire to trade his ticket on the legal profession's fast track for latrine duty in the jungle. So he quickly applied for another deferment based on his judicial clerkship. This time the Selective Service System denied his claim.

That was when the desperate Giuliani prevailed upon his boss to write to the draft board, asking them to grant him a fresh deferment and reclassification as an "essential" civilian employee. As the great tabloid columnist Jimmy Breslin noted 20 years later, during the former prosecutor's first campaign for mayor: "Giuliani did not attend the war in Vietnam because federal Judge Lloyd MacMahon [sic] wrote a letter to the draft board in 1969 and got him out. Giuliani was a law clerk for MacMahon, who at the time was hearing Selective Service cases. MacMahon's letter to Giuliani's draft board stated that Giuliani was so necessary as a law clerk that he could not be allowed to get shot at in Vietnam."

His clerkship ended the following year but his luck held firm. By then President Nixon had transformed the Selective Service into a lottery system, and despite Rudy's renewed 1-A status, he drew a high lottery number and was never drafted.

Today Giuliani's problem is not avoiding military service but explaining how and why he avoided it. A spokesperson for the candidate recently told New York magazine that he "has made it clear that if he had been called up, he would have served," which doesn't quite expiate his strenuous efforts to make sure that never happened. Giuliani opposed the Vietnam War for "strategic and tactical" reasons as well, according to his flack. Of course, that sounds much like the bipartisan dissent against the Iraq war that he now dismisses so contemptuously.

If Giuliani has a draft problem, Romney's may be even worse. The former Massachusetts governor, whose supporters object strenuously to any discussion of his religious beliefs, got his military service deferred thanks to the Mormon church.

Like Giuliani and millions of other young American men at the time, Romney started out with student deferments. But he left Stanford after only two semesters in 1966 and would have become eligible for the draft -- except that the Church of Jesus Christ of Latter Day Saints in Michigan, his home state, provided him with a fresh deferment as a missionary. According to an excellent investigative series that appeared last month in the Boston Globe, that deferment, which described Romney as a "minister of religion or divinity student," protected him from the draft between July 1966 and February 1969, when he enrolled in Brigham Young University to complete his undergraduate degree. Mormons in each state could select a limited number of young men upon whom to confer missionary status during the Vietnam years, and Romney was fortunate enough to be chosen. (Coincidentally, or possibly not, Mitt's father, George W. Romney, was governor of Michigan at the time.)

Now Romney echoes Giuliani by asserting that if he had been called, he would have served. "I was supportive of my country," he told Globe reporter Michael Kranish. "I longed in many respects to actually be in Vietnam and be representing our country there and in some ways it was frustrating not to feel like I was there as part of the troops that were fighting in Vietnam." Perhaps. But it is hard to blame Romney for choosing missionary work over military service. After all, the Mormons didn't send him to proselytize in the slums of the Philippines, Guatemala or Kenya.

They sent him to France.