Two years after the deluge: A brew of Hollywood pyrotechnics, homeowner nightmares and local cultural revival in New Orleans. 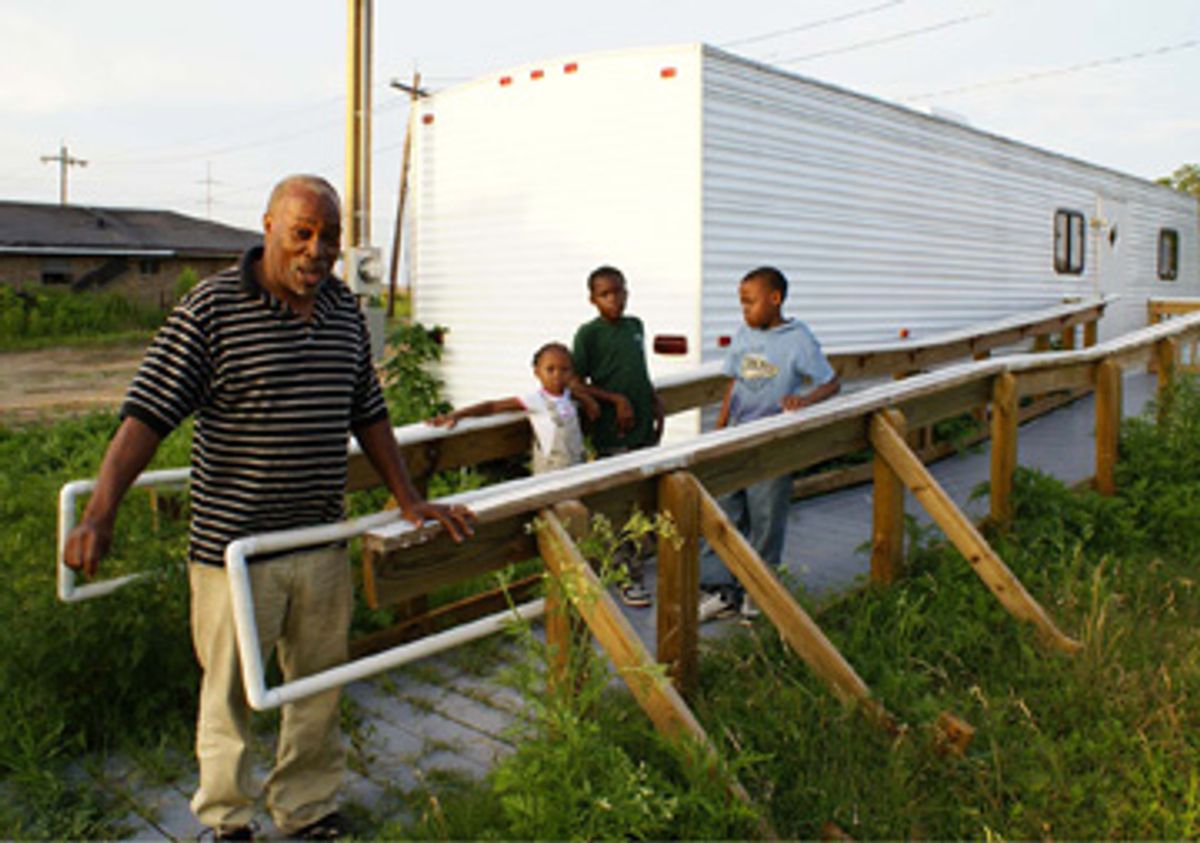 Around the block from the corner of Forstall and Galvez in the Lower Ninth Ward, a ragtag armada of pirogues, sailboats and motorboats stripped of their engines sit on a dusty curb. Though they may have once been used in the aftermath of Hurricane Katrina to rescue flood victims, their next cue will be as props for "Black Water Transit," a Hollywood "post-Katrina gunrunning thriller" once slated to star Samuel L. Jackson and Bruce Willis, now set to feature Lawrence Fishburne and Karl Urban. Production workers have also built a "wrecked" house from the ground up at this desolate corner in the city's hardest-hit neighborhood. Tilted from its foundation at a nearly 45-degree angle, the movie set sits next door to several real houses wrecked by Katrina's floodwaters and slated for demolition months ago. (Producers won a concession from the city to leave them standing, agreeing to pay for demolition if filming went past June 30.) Earlier this month the filmmakers rammed a car through the front of their fake Katrina house. Near the end of production they will blow it up with pyrotechnics.

Just across the street, on Forstall, stands a stark reminder of the real destruction that happened here nearly two years ago: The gutted shell of Mount Carmel Church, its brick façade still bearing spray-painted skulls and crossbones from the early days after the deluge, apparently indicating that dead flood victims had been found inside.

In the past year, visits to the Lower Ninth Ward by Hollywood stars, politicians, foreign dignitaries and busloads of volunteers have mostly faded into memory. But parts of New Orleans can still astonish with surreal scenes of Katrina's lasting aftermath.

Half a dozen blocks downriver from the movie set, Japanese artist Takashi Horisaki is completing latex castings of a flood-wrecked shotgun house on Caffin Avenue, which he plans to install at the Socrates Sculpture Park in New York City later this summer. This house, too, would have been bulldozed months ago but for the cooperation of the Army Corps of Engineers, which is implementing the city government's tear-down list. A graduate of Loyola University in New Orleans, Horisako has gotten help from dozens of volunteers over the past two months to help make his deadline, and he hopes his art will remind New Yorkers that New Orleans and its residents are still hurting.

It's true for Johnnie Blunt, whose hurricane-damaged house nearby at Charbonnet and Dorgenoise might still be standing if he were a film producer or conceptual artist. Blunt, 63, his wife, Charlene, 34, and five of their six children, all between the ages of 4 and 10, were among the last families in the Gulf region to receive an emergency trailer, which sat next to their damaged house for four months before they received a key from the Federal Emergency Management Agency. The Blunts evacuated ahead of the hurricane and spent the next 20 months living outside Baton Rogue, La. They returned to their old neighborhood the last week in May to move into their one-bedroom trailer -- only to discover that their home had been demolished by the city, without warning they say, two days earlier.

A cabdriver and part-time minister, Johnnie Blunt had planned to rebuild the cinder-block-on-slab house, the front of which also served as his small community church. "We had talked to them at City Hall ever since Katrina, and they told us to gut and board up our house and they would take it off the list to knock down," says Blunt, who did the work with his wife on weekend trips back to the city to comply with post-disaster property ordinances. "We figured we were OK and didn't have anything to worry about. The only thing wrong with the house was a big tree had put a hole in the roof, but the walls outside were brick and in perfect condition."

Blunt and his children -- Wayne, Wallace, Worlonzo, Wanesheir and Wenzy (15-year-old Wille is living with her grandmother) -- stand on the front steps of their trailer on a late Sunday afternoon, looking out across a neighborhood that feels like a forgotten rural outpost. Nearly two years after 13 feet of water rolled through, the city's aggressive cleanup of the Lower Ninth has left empty fields where weeds stand 6 feet tall, wild chickens cluck after bugs, and front steps lead to houses that are no longer there.

The silence is broken by a pit bull that turns a corner and starts barking at the children, who cower and flee inside. The dog belongs to a neighbor who lives in another FEMA trailer down the street. "They're afraid of that dog and he knows it," explains Blunt, who says he will enroll his children in the nearby Martin Luther King Jr. Charter School when it reopens in August, one bright spot in the Lower Ninth's long dirge of tragedy since the storm. "We thought about trying to find some kind of summer camp for them, but we didn't know where to look and now it's probably too late."

Blunt has other worries. Back in 2005, because of some money troubles, he decided to stop paying his homeowner's insurance so he could finish paying the mortgage on his house. It was two months before Katrina struck. "That turned out to be a really bad decision," he says. Meanwhile, the city not only tore down his house but also reassessed his property lines, he says, redrawing his lot much smaller than he believes it to be. Nearly broke, he had paid property taxes on the house a few weeks before it was demolished in May. Although he filed an application last year for federal grants aiding homeowners affected by Katrina, he has yet to get a dime from Louisiana's Road Home program (which is funded by the U.S. Department of Housing and Urban Development) -- and he'll have to refile before July 31 now that he no longer has a home to repair. "I don't understand it," says Blunt, who is more bewildered than angry. "It seems like they're doing everything they can to keep people from moving back here."

Blunt is not alone in his experience. Mayor Ray Nagin's administration has been criticized for inconsistencies in how the city has implemented its power to tear down hurricane-damaged structures deemed "imminent dangers," while placing liens on the properties for the cost of the work. A report in the Times-Picayune recently cited at least a dozen cases in the Lower Ninth Ward in which homes in apparently salvageable condition were listed for demolition. Housing advocates point to haphazard enforcement of the law, a confusing and inconsistent notification process, and the lack of an appeals process. The city's tear-down campaign runs parallel to its Good Neighbor Program, which gives property owners 120 days to clean, gut and board up hurricane-damaged houses, and has an appeals process for residents to contest tear-downs or show they are working on their property. Activists have threatened lawsuits unless the city reforms its tear-down process.

To date, the private market has revealed little interest in rebuilding the Lower Ninth Ward, an area that before Katrina had one of the highest homeownership rates in the city. In the aftermath of the disaster, the area just east of the catastrophic breach in the Industrial Canal became a national emblem of the destruction Katrina wrought on the city's black working class. But like Blunt, many were struggling long before the hurricane. "After I bought this house in 1989, I worked and worked to pay that mortgage off," he says. "I left for work early so I could walk and not have to pay bus fare. [Some days] I didn't eat lunch." Many years later, he says, "we're supposed to be enjoying it."

But that dream of a well-rooted family life, and a solid investment in a home, is long gone for now. "We asked FEMA for a bigger trailer and they said they couldn't do that," Blunt says. "So we said, OK, we'll make do."

On the other side of the Industrial Canal, the city's recovery continues in patchworks of steady progress and static desolation. Much of public housing remains shuttered, and its thousands of former residents scattered, as a lawsuit against HUD's plan to raze most traditional public housing projects in the city awaits a court date. (A bill currently before Congress sponsored by Rep. Maxine Waters, D-Calif., would also force HUD to reopen some units while its revitalization plans are in progress.) Like Blunt, thousands of homeowners have yet to receive long-promised state and federal aid to supplement shortfalls in insurance payments.

Yet a tide does seem to have turned on blocks where the flood was less devastating, including some predominantly black neighborhoods in the Seventh and Ninth wards. With scant political leadership, economic aid or coherent planning, it's an improvised effort that has mostly happened through individual will, investment by nonprofits and community development corporations, and the work of thousands of volunteers from all over the country.

Perhaps the most important rallying cry for natives has been the city's unique street culture of music, food and community celebration. Hundreds of New Orleans residents still displaced by Katrina recently returned to the Seventh Ward from cities as far away as Atlanta to attend the Original Big Seven Social Aid and Pleasure Club's annual second line parade. Drawing primarily from former residents of the closed St. Bernard housing project, the club's honored guest this year was Gloria Irving, 71, a former St. Bernard resident who last year was at the forefront of protests over the development's closure. In April 2006, Irving led a group of demonstrators who forced open a security fence at the development, driving her motorized wheelchair through a line of police and housing authority security guards. Rescued by boat from St. Bernard five days after Katrina, she spent most of the next 16 months in Houston before moving back to New Orleans. "This is our day -- we're home and we're here to stay!" Irving declared from her backseat perch in a convertible at the recent second line parade.

While notable progress has been made in parts of the Seventh Ward over the past year, similar homecomings have yet to happen in neighborhoods like Johnnie Blunt's. Still, he expresses no doubts about his own family's return. "We was always planning on coming back," Blunt says. "This is home, where I eat and work and do everything. Now we're stuck right here and have to live with what we got," he says, motioning toward the trailer. "This is my family, we're tough, we're OK. The Lord will take care of us."

Additional photos by the author in connection with this story are available here.

Bill Sasser is a writer based in New Orleans.