Conversations: "The Devil Came on Horseback"

The makers of a devastating documentary on Darfur discuss the crisis and how to resolve it in this interview and podcast. 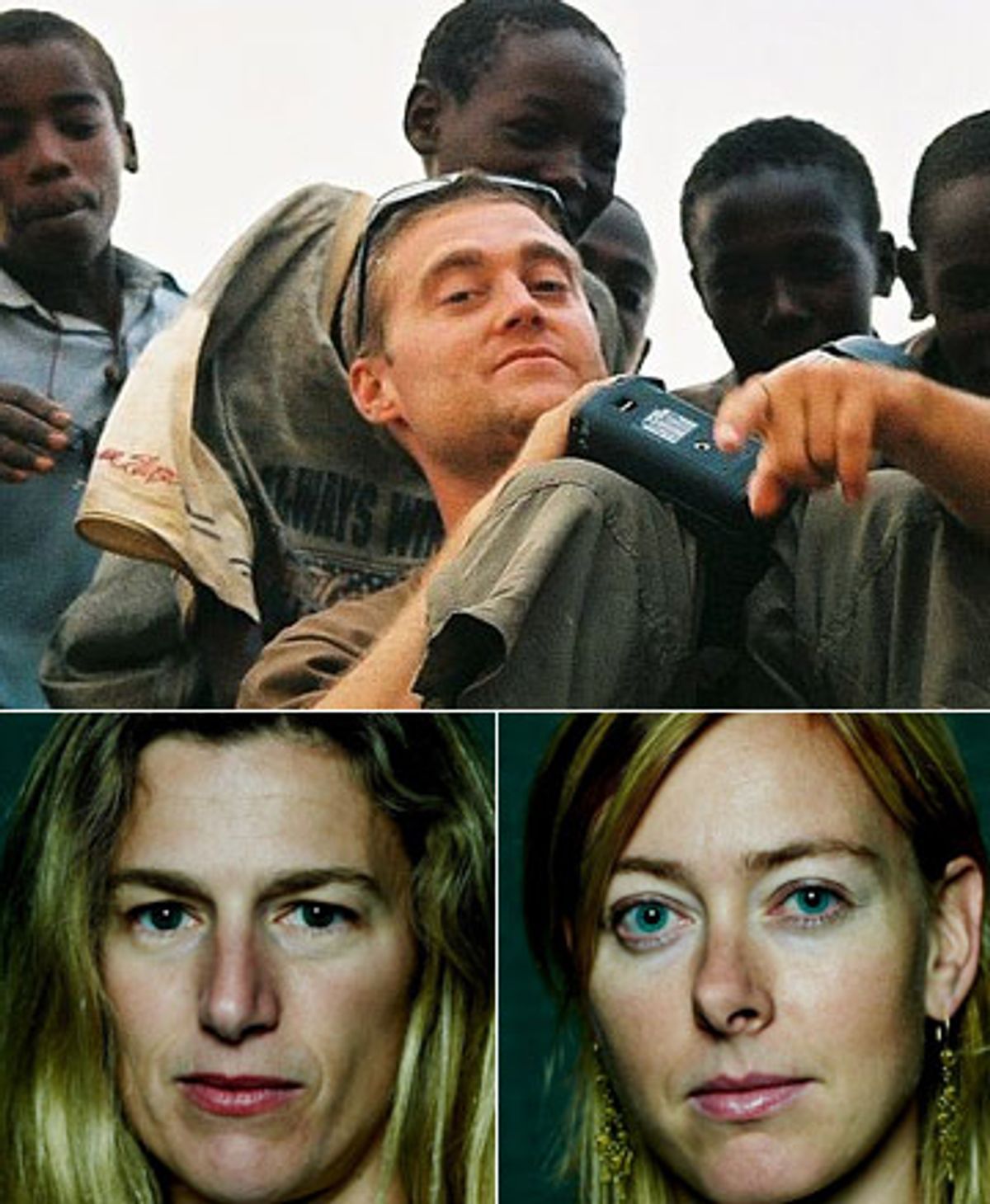 In February 2005, the New York Times published photographs of four dead bodies -- one skeletal remains, three intact -- lying on brown, sandy ground. In the most upsetting of the shots, a dead infant -- cheerfully clad in red, with bright blue shoes on his tiny feet -- lies face down in the sand. The photos, taken in the Darfur region of Sudan, had been leaked from classified African Union archives by Brian Steidle, a former U.S. Marine and one of just three American military advisors to the region's African Union monitoring team.

Not long after the photos appeared, Annie Sundberg and Ricki Stern, the duo behind the award-winning "The Trials of Darryl Hunt," approached Steidle about making a documentary to help draw attention to the crisis. Steidle gave the filmmakers access to hundreds of his photographs -- rare visual proof of Sudanese government-sponsored atrocities -- and allowed their cameras to follow him on a cross-country lecture campaign and on information-gathering trips to Chad and Rwanda. The resulting film, "The Devil Came on Horseback," which opens in New York on Wednesday, is a vivid, kinetic retelling of Steidle's experiences as an observer during the genocide.

The film lays out the crisis in simple terms. Although southern Sudan has been wracked by civil war for more than 20 years, the current situation in Darfur dates back to 2003. Following a rebel uprising in February of that year, the Sudanese government used Arab mercenaries (the "Janjaweed") to attack southern militias and local civilians. The resulting conflict -- in which militias burn villages, torture civilians and rape women -- has claimed, according to conservative estimates, more than 200,000 lives and is now regarded by the United Nations as the world's largest humanitarian crisis.

Salon caught up with Stern, Sundberg and Steidle in May at the Tribeca Film Festival, where the film was screened. Sitting in the filmmakers lounge, the trio spoke about their goals for the film, the solution for Darfur and the ethical dilemmas of making a movie about genocide.

Did you have a specific goal in mind in making this film?

Stern: We wanted to make people aware of what was going on, and give them a simple enough education of what's happening in Darfur that they weren't overwhelmed with too much information, but knew enough to be engaged and understand what the story was and what was happening to Brian as it unfolded for him.

Sundberg: Our hope was to make a film that is going to wake up an audience and have an emotional connection to what's happening -- with the idea that Brian as a voice could bring a different kind of audience [to the film] as opposed to those that are already tapped into African issues.

How important is it to have a Western figure in the film for the audience to identify with?

Stern: We think that the American audience and American distributors need to have a protagonist that is identifiable to them. I don't want to say it has to be an American, but whoever that person is -- in the movie "Hotel Rwanda" it isn't an American per se -- it's somebody with a personal story that we can identify with. In this case it happened to be an American.

Sundberg: Brian, more importantly than being an American, had access to information that very few other people had. He was on an eight-person African Union monitoring team. [Through him] we had the ultimate insider perspective on the Darfur crisis.

Do you think there are advantages in using the visual medium, as opposed to print, in covering this story?

Sundberg: You can read a lot about Sudan, but it doesn't carry the kind of emotional impact that you have with an image. I hate to say it, but words come from the imagination, and people can discount articles that are written by claiming certain atrocities weren't committed. Brian's photographs are proof, absolute evidence of atrocities. It's so valuable for the international community to have that, but it also goes back to what photographs can do.

Stern: A lot of the work in this film was done in researching and getting the audio news stories that we used in the film, and gathering other renegade filmmakers' footage that had been shot in Darfur. When Brian brought the story back, Darfur had already been closed to journalists. Of course there are still journalists there now, but I think the footage that was collected in 2003 and 2004, I don't think it's coming back now: of villages being burned, the destruction. It's being covered up better now, or it's just not getting out.

With a complex conflict like Darfur, do you think that the lack of straightforward narrative keeps people from engaging with the situation?

Sundberg: I think that people do shy away from the complexity of this. People get confused when we say, "Oh, it's Muslim on Muslim," or, "What does it mean to be a black African versus an Arab in Sudan?" It's almost like it's too complicated: "I don't want to get involved when I have to do too much work to figure out how to address this situation." Our goal with the film is to convey that this is a government that is neither protecting nor benefiting its citizens and the civilians are the collateral damage in the crisis. Our hope was to keep things understandable on a human level, so that people could really empathize with the Darfurians.

How do you negotiate that ethical dilemma of speaking to people, as you did in Chad, when you're potentially putting them at risk of reprisal?

Steidle: We felt that showing their stories without mentioning their names minimizes their risk. They're willing to take the risk. They want the story told and they really believe that America can help them.

Was there ever a moment where you backed away from somebody because of the risk to them?

Steidle: No, there wasn't.

In the end, it was the Rwandan Patriotic Front that ended the Rwandan genocide. How likely is it that the Sudanese people will end this crisis themselves?

Steidle: The only way I think that the Sudanese people can end the crisis is to become a stronger military presence than the Sudanese government. At the moment they can't do that because they don't have the equipment, the training, the ammunition. If there was interest from the international community to assist the rebel groups within Sudan, you'd also see the south rise up again and destroy the government. I think the Sudanese people see themselves as Sudanese. They don't want to be separate. They don't want to see families get killed, or friends. I think it's more likely that we'll see a peaceful solution than a wartime solution.

If there were a military intervention in Sudan, do you think it should be a neutral peacekeeping force, or should troops be allowed to take sides in the conflict?

Steidle: There should be no taking sides. That's why the United States was overwhelmed in Somalia and pulled out. You cannot take sides in internal conflicts because sides flip, people flip. You have to go in there with the intention of protecting the civilian population from the rebels, from the Arabs, from the government, from anybody who threatens their existence. You cannot afford to take sides; if you take sides in the military conflict you will be overwhelmed.

You advocate divestment. Why?

Steidle: I think that one of the simplest and easiest things we can ask people to do is divestment. The whole divestment issue is to try to get people to pull their money out of the two dozen companies that are complicit in this genocide -- companies like Petrochina, which is owned by the Chinese state, and funds this war [by buying Sudanese oil]. Without them there would be no war. There would be no money to buy equipment and ammunition for the Sudanese government. By putting pressure on those companies, I think we can make a concrete difference on the ground.

How would you respond to people who say that that approach is too slow moving?

Steidle: I would say that we're already slow moving, and so any step forward would be a good step. Divestment is something you can do tomorrow.

Sundberg: When you look at the overall share of international trade that countries in Africa have, Sudan's a big player, with oil revenue in particular. I think if you really put pressure on Sudanese oil exports, it's the biggest thing that's brought them to the table. There are also possible U.S.-led sanctions. One is a sanction that would have any tanker that has ever carried Sudanese oil be prohibited from entering U.S. ports.

Steidle: This would put the pressure not only on the Sudanese government, or these oil companies, but on these ship captains and shipowners. They would have to make a decision: "Is it more important for me to trade with the U.S. or with the Sudan?" Who are they going to choose? They're going to choose us.

Because so many people have died in Darfur, it seems hard to imagine them as people, instead of anonymous victims. Did you try to individualize them in the film?

Stern: We have thousands of Brian's photographs showing the dead bodies, showing images of dead person after dead person. You can divorce yourself from it, but if you spend enough time and slowly look at these photographs and at their details, it becomes personal. But it's important also to show the living -- to show what we're missing.