Internet companies are lobbying the FCC to open up wireless networks to new applications and devices. If they win, we could all have cheaper, better, more wonderful cellphones. 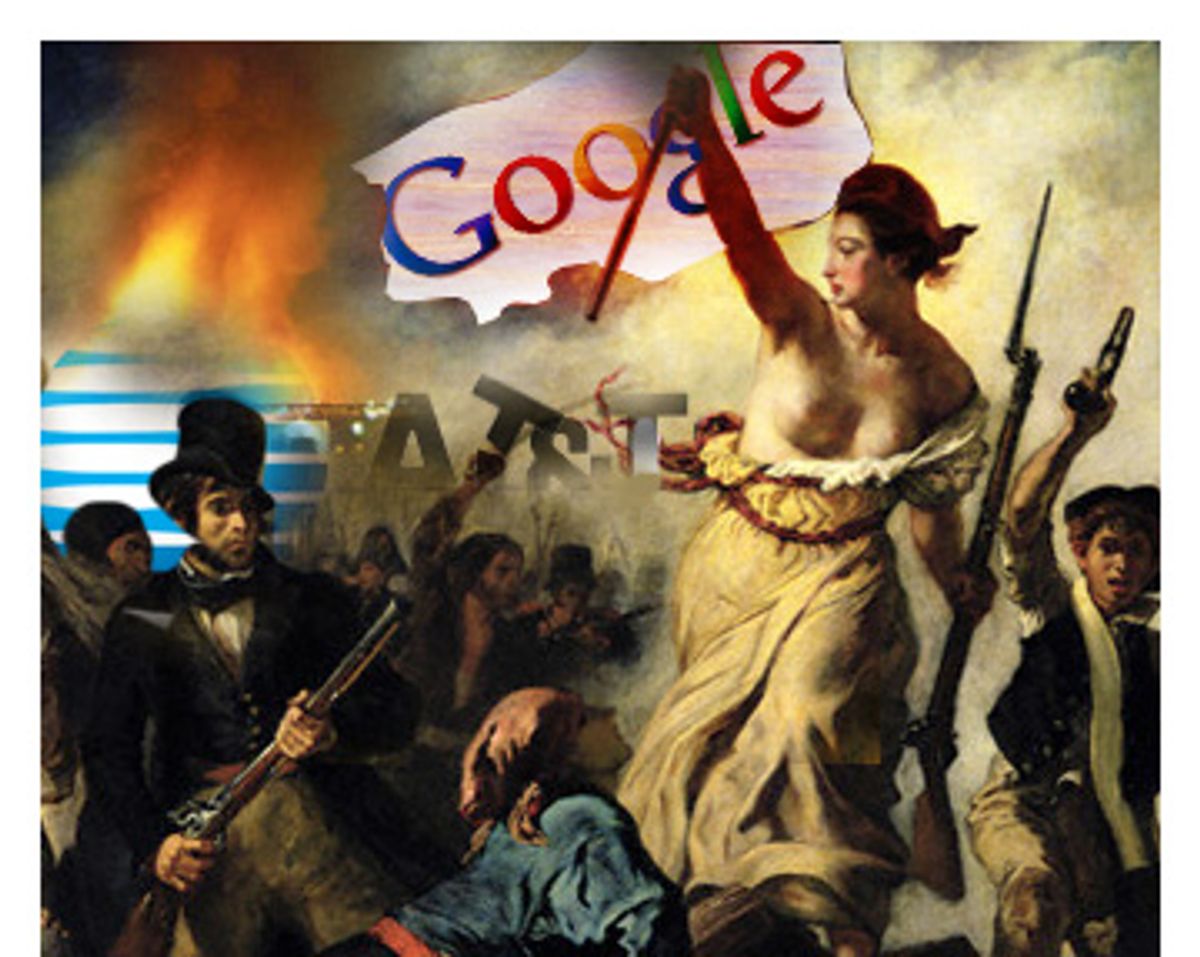 In 1921, a small company in New York -- you might call it a tech start-up -- invented a solid-state device to ease the social discomfort occasioned by the advent of the telephone. The earliest phones had poor microphones, and people were forced to bark into them rather than talk; because phone lines were beginning to show up in drugstores, saloons, hotels and offices, all the yelling posed a challenge to privacy (of the callers) and peace (of everyone else). The start-up firm came up with a solution that engineers today would label a kludge -- an inelegant quick fix, but hey, it worked. It was a portable bell-shaped cup that fit over the phone's mouthpiece, a fixed version of the shield you'd make with your hands around your mouth if you were trying to keep your business on the D.L. Hence the device's inspired name: the Hush-A-Phone.

Over the next few decades, the Hush-A-Phone Corp. of New York saw its kludge become a big hit, selling more than 125,000 units to a phone-crazy public. But not everyone was happy about its success. In the late 1940s, AT&T, the monopoly that controlled the nation's phone system, charged Hush-A-Phone and its users with violating a rule: Only devices "furnished by the telephone company" could be used on the telephone network. The phone company threatened to close Hush-A-Phone users' phone lines and shut down the stores that sold them. An epic legal fight ensued, stretching on for eight years and involving the Federal Communications Commission and several levels of the federal courts. When it was over, in 1956, tiny Hush-A-Phone had prevailed -- and so too every telecom start-up since.

The Hush-A-Phone court decision inspired a more far-ranging rule known as Carterfone, a 1968 FCC judgment that undid AT&T's control of the "edge" of the network. The Carterfone rule prohibited the phone company from dictating how people could use the lines coming into their homes and offices. It presaged a new age of innovation in communications technology. Just about every amazing thing we now use on the phone network -- cordless phones, answering machines, TiVos, home security systems, fax machines, dial-up modems, DSL modems (the Internet itself, you could say) -- is a direct consequence of Hush-A-Phone and Carterfone decisions. But consider this: The rules do not apply to cellular networks.

Though wireless carriers depend on public radio space for their fortunes, they're currently free to proscribe public freedom on the networks they run. AT&T, Verizon, Sprint and T-Mobile decide which phones customers can use on their systems; which programs and features they'll allow on those phones; and in what manner people are allowed to use those devices. The technology of 2007 is flashier than that of 1921, but the networks operate in roughly the same manner as the pre-Hush-A-Phone landline system -- if you use your phone in a way not sanctioned by the phone company, they're free to shut you down.

Last week Google announced that it would bid $4.6 billion for a slice of the public airwaves that the FCC plans to put up for auction next year. The radio space being sold -- known as the 700 MHz band -- could provide faster, more reliable wireless Internet connections throughout the nation, and large telecom firms are setting aside huge sums to snap it up. But Google, which is acting in concert with a host of Internet companies, has lobbied the FCC to make the waves open -- to force any firm that purchases the radio spectrum to follow the Carterfone rule, among several other principles of openness. Google says it will participate in the auction only if the FCC agrees to moves its way.

The fight may seem like an obscure regulatory tangle between large corporations, and telecom firms -- which oppose Google's bid -- are already accusing it of seeking corporate welfare. But the decision could prove no less profound than the Hush-A-Phone ruling. If the FCC comes down on the side of openness, proponents of a wireless Carterfone rule say, customers would see a host of new technologies pop up on their phones, and they'd likely see prices come down, too.

For instance, every major cellphone company currently prohibits customers from using non-sanctioned Internet phone services on their cellphones, says Chris Libertelli, the head of government affairs for Skype, which recently called on the FCC to expand the Carterfone decision to wireless networks. (Here's the PDF of Skype's petition.)

Skype makes one such voice-over-Internet-protocol (or VoIP) phone system. If you had Skype on your cell, you could make voice calls to other Skype users -- whether in Illinois or Iraq -- for only the cost of sending Web data over your phone (essentially for the cost of an unlimited data plan on your cell). Skype's software -- like the Hush-A-Phone -- poses no harm to the phone companies' networks; Skype has produced a cellphone version of its application that is widely in use in Europe and Asia, Libertelli says. But American wireless companies have a financial motive to block it: If you're using Skype, you're not using regular cell minutes, after all.

Skype's not the only thing you can't get on a cellphone. As the law professor Tim Wu has pointed out, phone networks have blocked handset manufacturers from adding GPS services, Wi-Fi, Web browser and e-mail software, file-transfer applications, and a host of other software and hardware capabilities that could potentially eat into carriers' profits. The Wall Street Journal reported that RIM, the company that makes BlackBerry phones, wanted to add a free maps program on their devices; AT&T prohibited it because it had a $10-a-month mapping service to sell to users. RIM also built a phone capable of seamlessly switching between networks in Europe and networks in America -- handy for international travelers. But Verizon, the Journal reported, locked down that capability to anyone who didn't pay a fee.

I asked Verizon -- which has been the most vocal of all carriers in its opposition to openness principles -- to explain its rationale to me. A spokesman declined, pointing me to the company's regulatory filings with the FCC on the matter. Verizon, like other cell firms, generally argue that government regulation over its businesses would harm American economic vitality. The wireless market, unlike the old land-line system, isn't a monopoly, Verizon points out. Four companies fiercely compete with each other for customers -- and if customers (that is, "the marketplace") really demanded open networks, companies would surely see it in their interest to provide it.

Libertelli, though, argues that the phone companies have a narrow definition of "free market." They compete with each other, but they don't want to compete against the Skypes, Googles, and other Internet innovators of the world. "There's a whole new Internet model out there, and it's nothing like what the telecom world has seen. In some ways it's a clash of worldviews. We're trying to build a free market for devices and applications," Libertelli says. "Carterfone is the way to bring the innovation of the Internet to the wireless market."

Fortunately, Kevin Martin, the Republican chairman of the FCC, seems to be listening. He has proposed adopting a wireless Carterfone rule for the 700 MHz band, and according to lobbyists who've spoken to him, he seems to be genuinely considering adopting a model to make wireless networks fully open. Gigi Sohn, who heads the public policy group Public Knowledge, says Martin understands the weight of his ruling -- that, like the Hush-A-Phone decision, it could change everything. "He knows that this is his legacy," Sohn says.