The Art of Eating's Ed Behr talks about the tyranny of top 10 lists and why we need a food magazine willing to run a 13,000-word story on Roquefort cheese. 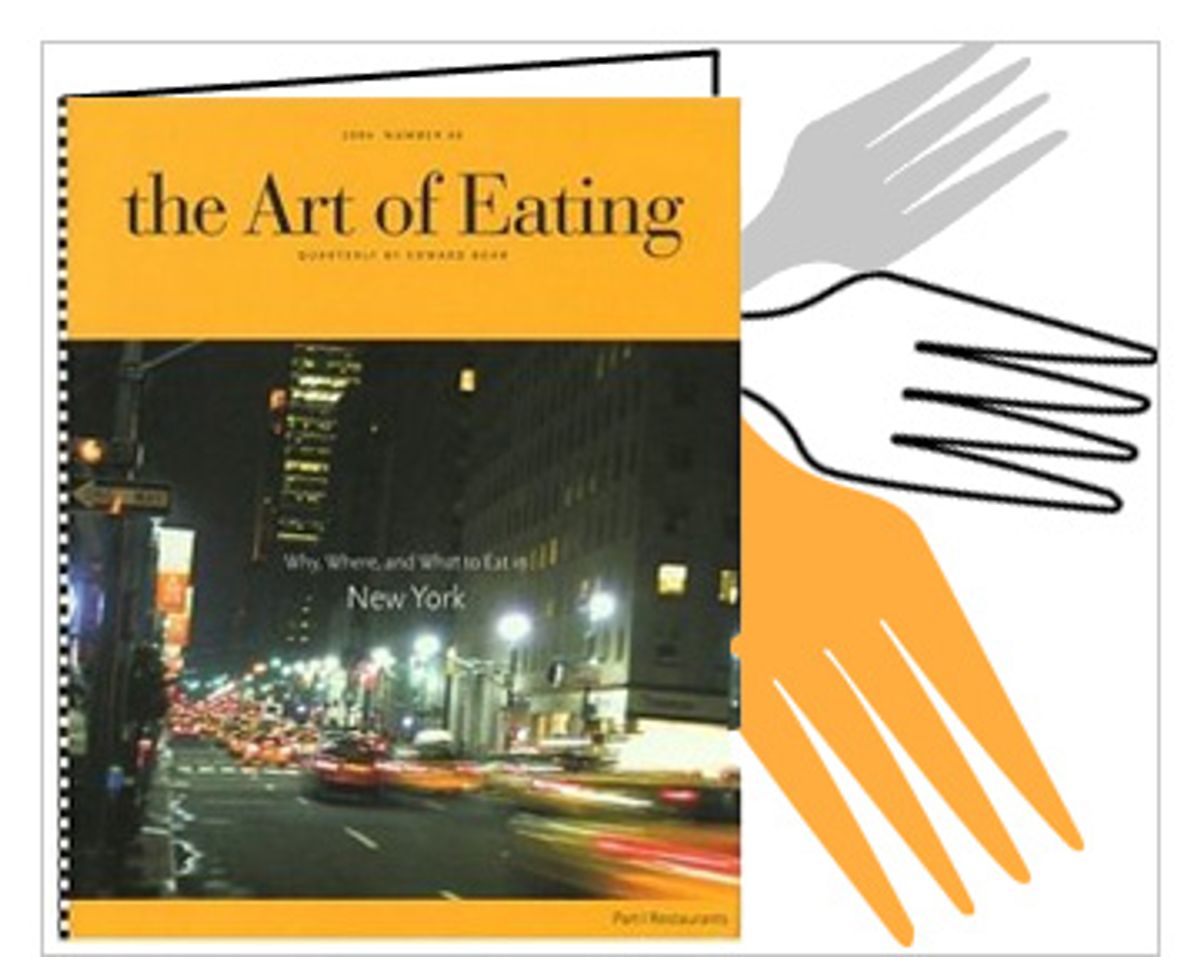 The Art of Eating is not a magazine for the easily distracted. If you want to read up on the trendiest new eateries in New York, the top 10 summer cocktails or a profile on the latest Food Network star, look elsewhere. Because if Bon Appétit is the food media's Newsweek and Saveur is the Economist, then the Art of Eating is the New York Review of Books: sometimes impenetrable, often spellbinding, and never, ever reductive. Within the course of a typical article, it's not unusual to move from a detailed discourse on culinary history to an apples-to-apples comparison of production methods to a chemical analysis of the specific compounds responsible for giving a particular type of food its unique flavor. The 2002 feature "Twelve Restaurants in Tokyo" not only explained where to get the tastiest okonomiyaki, but also how to best spend $750 on traditional haute cuisine, and why department store basements are a culinary anthropologist's dream come true.

Edward Behr -- an ex-carpenter with a passion for journalism -- founded the Peacham, Vt., quarterly just over 20 years ago. It may be his craftsman's eye that draws Behr into the nuts and bolts of food at such an elemental level. Behr finds few questions too trivial to answer completely -- this is a man, after all, who once penned a 13,000-word treatise on Roquefort. But the result is sprawling works of analysis and research, and articles that actually teach readers something. Behr's writers' guidelines state: "Be short: Say it all and no more" -- but, hey, sometimes you can't properly describe the French relationship to the baguette without spilling a bit of ink.

Salon spoke to Behr by phone about "civilized" eating, bad coffee and the ongoing redemption of American chow.

What drove you to start the Art of Eating?

The one-word answer I always give is "naiveté." I had no idea what I was getting into. I'd been a carpenter for maybe a dozen years and I wanted to do something more interesting.

I was looking for something else, and my girlfriend at the time thought I was much more interested in food than I was aware of -- so I began to think of opening a restaurant. Considering my naiveté, that would have been a really bad idea -- I would have opened it, promptly lost a lot of money, and closed. Instead, first I began to write a black-and-white eight-page newsletter, and then six months or so after that, in November of '86, the first issue of the Art of Eating came out.

Did you have any journalism training or writing experience?

No, but my father was what used to be called a rewrite man for the Wall Street Journal, so I had some writing in my background. But I'm a two-time college dropout -- I just had the courage to think I could do it, and I don't know where that came from.

How has the magazine sustained your interest for 20 years?

People used to say: "Are you going to run out of things to say?" But food is just a huge topic, and I try very much to keep focused on taste. We don't do things like food history for its own sake. History should illuminate the way things taste or explain something that somebody might actually want to go out and eat or drink.

How big is your subscriber base, and do you have a sense of who they are and what they do?

It's somewhere in the range of 6,000. They tend to be in university towns and affluent zip codes in general. When I first started out, a subscription cost $14 a year [it's now $48], and I thought I'd have back-to-the-land sort of impoverished hippies raising their pigs and curing their hams -- but alas, they never signed up. At least not in any noticeable number.

The magazine doesn't carry ads, and I don't see it promoted anywhere. Have you consciously chosen not to commercialize the Art of Eating?

Well, there seems to be a real desire for a product that doesn't have ads, that risks saying things from time to time, and is clearly is not in anybody's pocket. A reader not long ago wrote to me saying: "You are the guy who had the courage to say all coffee in North America is over-roasted," and I probably did say something nearly like that.

You wrote in your 20th anniversary issue that part of the magazine's purpose is to promote what you call a civilized life, at least in a culinary sense. So how do you define "civilized"?

I suppose it has to do with a couple of things. Your own personal satisfaction, but also some sense of doing good in the world and not eating cruelly raised meats and food raised through unsustainable agricultural methods and all of that. But it's also about things that have an appealing aesthetic value. An uncivilized meal would be a salad that tastes of the long chain of refrigerators from harvest to supermarket to your plate. Civilized would be a salad of perhaps just some mixed greens from half a mile away. Then you have the association with knowing the person who made the food -- you have the fact that it doesn't come from far away, the pleasure of having something growing nearby -- the freshness, the quality, the organic methods, and hopefully skilled, not just organic, but skilled methods. Which is a little different than a starched napkin, although that could be part of it too. But that's not really what I'm thinking of.

A lot of food magazines are chockablock with very easily digestible bits of information -- top 10 lists and, on the Web sites, audio interviews and slideshows -- so why do you still eschew the Web and run such long articles?

Well, print -- to go back to the word "civilized" -- I think it's more civilized. You can read a lot more well-designed words on paper than you can onscreen.

As to why so long -- well, when you have top 10 lists or really distilled advice, the problem is that that advice tends to be misleading because some things can't be distilled. Many things can't be distilled. It's a flawed concept much of the time. Sure, Cook's Illustrated just sent me an e-mail saying what the best ice cream maker is. And you can just go buy their top-listed ice cream maker, and sure, that's maybe well-suited.

But you can't list the best sauvignon blanc. Because first of all, sauvignon is at least two distinct kinds of wine in my view, a much riper and a much less ripe style, and it depends completely on what the occasion is. You know, do you want it with fish? Do you want it with whatever? And that's a real can of worms.

Some of the leitmotifs of the Art of Eating are terroir, traditional methods of harvesting and production, and getting back to a simpler, more organic ideal. To what extent do you consider the Art of Eating a love letter to the slow food movement?

I'm a huge admirer of slow food and of Carlo Petrini. I'm a great believer in it. But I think the model applies much more to Italy and Europe and certain countries with excellent, well-established traditions that can benefit from support. Whereas in the U.S. I think the model doesn't work as well. We're kind of inventing traditions or pointing to things that were never so important or so well-established.

Good food is a pop-culture craze these days. Has the idolization of chefs and popularization of cooking and eating had any impact on your magazine?

I don't think it's had anything to do with my magazine, because it's such an ink-on-paper traditional type of publication that its readership is not going to be deeply influenced by TV or popular media in general.

What's your sense of what it's done to the culinary landscape here in America?

I think that overall the effect on food has been positive. I'm sure it could be better and that things tend to get dumbed down, but I think that most people's standards for freshness and for what tastes good have hugely increased over the years.

There are many specific things that aren't any better, though. I don't think people's standards for olive oil are really any better than they were, for all that's been written about olive oil and for all the high prices. And coffee, for instance, is another one where things aren't any better. Overall, that may be worse.

Nonetheless, I remember being taken out by my parents when I was an early teenager, in the early '60s, and I remember thinking to myself: "Boy, if you ate this way all the time, it would be really bad for you. I don't know if you could survive." Things were full of fat, there wasn't that freshness -- you got that the feeling that everything had been sitting on the back of the stove, even at a white-tablecloth restaurant -- whereas it's hard not to find food that seems to be at least halfway toward being fresh these days. If you pay just a little bit more than the average and if you look just a little bit, it's pretty easy to eat healthy food. And that's a huge improvement.

Who are the heroes who influenced you and helped shape your vision for the magazine?

No one help me conceive of the magazine as a magazine. I have no hero who guided me as to how to turn the information into a usable magazine form. But I have big heroes -- two writers about food: Patience Gray and Richard Olney. To me they are just the standouts. Those are the people who when I want to know the truth about something, I turn to them, hoping that they've addressed the topic. And they write so very well. Richard Olney's style may be a little, I don't know, stiff or old-fashioned now, but he writes so clearly. It's just wonderful. He's been dead a few years now, and most of his important stuff he wrote some time before that. Sometimes there's a subject -- like brining or pre-salting of poultry -- that I assume, "Oh, he probably didn't address that." But then I realize, by golly he did it in the 1970s. It can be humbling.