The GOP front-runner isn't Fred Thompson or Mitt Romney. It's "none of the above." 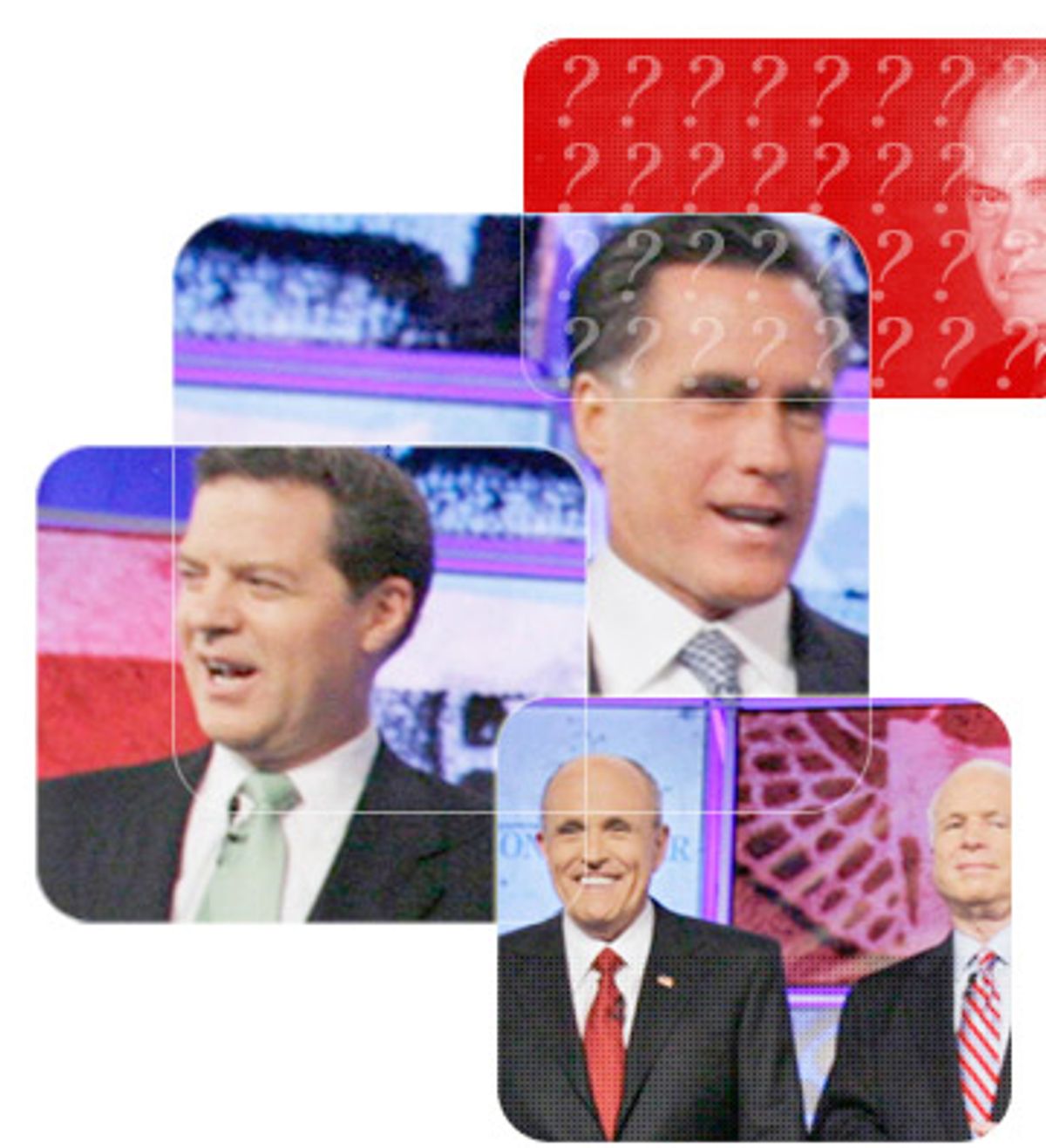 In the past week, Mitt Romney -- the former Massachusetts governor who seems to be edging into the front-runner's position for the 2008 Republican presidential nomination -- has taken to ignoring his fellow Republican challengers, instead aiming his barbs at the leading Democratic contenders. In a speech last week, Romney denounced Barack Obama's healthcare plan as socialized medicine and dismissed Hillary Clinton's economic views as Marxist. "She said we have been an 'on-your-own society.' She said, 'It's time to get rid of that and replace it with shared responsibility.' That's out with Adam Smith and in with Karl Marx," said Romney, in a rhetorical flourish that managed to distort both Clintonism and Marxism.

It is a reflection of the desperation of the Republican field that the man who for the moment looks as though he might be the party's presidential nominee clearly hopes to draw Nikita Khrushchev as his opponent in the general election. The Republican Party generally likes to anoint the guy "next in line" as its preferred nominee and cruise through the formality of the primaries, but this time there is no next guy in line, no chosen establishment candidate. Instead, there are nine (or 10, or 11) flawed contenders for the nomination, and the lack of enthusiasm within the party for those contenders is palpable. A CBS/New York Times poll taken earlier this year showed that whereas 57 percent of Democrats were satisfied with their options, the same percentage of Republican voters were dissatisfied with their presidential choices. In an Associated Press-Ipsos poll released last week, "none of the above" beat every announced candidate and Fred Thompson too. Mitt Romney, instead of looking ahead to the general election, had better watch his back. With the GOP one defeat away from being reduced to minority status at every level of government, the 2008 nomination contest has descended into a battle of attrition. The Iowa caucuses are less than six months away, and the nominee may be the candidate who doesn't so much win as move to the lead at the right moment and avoid blowing it.

For a long time, it looked as though John McCain, once George Bush's nemesis, had become his heir. He was leading out of the gate, entering 2007 as a war hero with strong name ID and a loving relationship with the media. But nothing has since gone right for the Straight Talk Express 2.0. In the past month, staffers and consultants have bailed amid cash-flow problems. The campaign's second-quarter fundraising report revealed that McCain had a measly $2 million cash on hand, a sum roughly equivalent to what Clinton and Obama have been raising on average per week during the first six months of 2007. It is now moot whether McCain's fall is a byproduct of clinging too closely to President Bush on immigration, an issue that infuriates the conservative base, or clinging too closely to Bush on the Iraq war, an issue that panics the party's remaining moderates. Either way, the campaign of this former POW has taken a turn toward MIA. Though polls reveal the public's hesitancy to elect a man of his age, McCain's problem is not that he's 70 but that he's been more or less running since 2000. The candidate, not the man, has aged poorly.

McCain's supposed successor as front-runner was Rudy Giuliani. The former New York City mayor, who has been riding for six long years on his Sept. 11 reputation, was positioned to pull away from the post-McCain field but already seems winded. Giuliani's problem isn't the war: He supports it while cleverly avoiding responsibility for it as he positions himself as the candidate of 2002 -- that is, after the terrorist attacks but before Iraq. Nor, contra the conventional wisdom, is wariness among the party's conservative base dooming his candidacy. Giuliani's real problem is that his central claim to the nomination is his electability. But electability -- indeed, his whole campaign -- is based on one issue, and his record on that issue is now under attack. Ground Zero workers, the Uniformed Firefighters' Association union, and the surviving family members of some New York City firefighters who died on Sept. 11 have made it clear they will publicly challenge his anti-terror bona fides. Perhaps Giuliani can dismiss these impassioned attacks as shrill and partisan. At least one important former ally, however, former Sen. Al D'Amato, R-N.Y., finds them potentially resonant enough to have attended a recent private New York meeting between his own chosen candidate, Fred Thompson, and the president of the New York local of the UFA. And if Giuliani is truly immune to doubt about his "America's Mayor" image, why are his poll numbers starting to look like McCain's? Since earlier this year there's been a slow, steady leak in Giuliani's numbers.

With McCain and Giuliani fading, the backstretch belongs to Romney, he of the utterly fungible belief system and utterly immovable coif. But just how much are Republican primary voters willing to bet on the former Massachusetts governor? White evangelicals hold special sway during GOP primary season. They constitute 31 percent of the Republican base in Iowa and 39 percent of GOP voters in South Carolina. How many of them will grit their teeth and vote for a candidate whom they believe to be a religious cultist? If Ralph Nader was capable of siphoning enough votes from a putative Democratic majority to put Bush in the Oval Office, imagine what a disgruntled white evangelical base can do to a Romney-led Republican ticket. And Republicans picking Romney because they care first and foremost about keeping the White House should take a moment to peruse the head-to-head matchups on Pollster.com between the top three declared GOP candidates and the Democrats' trio of leading contenders. Against Clinton, Obama or John Edwards, McCain and Giuliani are competitive or, in some pairings, run slightly ahead; Romney is well behind all three. It's also hard to see how the GOP, which so venerates machismo in its nominees, wants to nominate the one guy to whom Hillary Clinton could legitimately turn in the middle of a debate and say, "I continue to marvel at the media's fascination with my haircuts and clothes, especially since the governor has a much prettier head of hair than I have ever had." The Romney stumble is imminent.

If all else fails for the Republicans, the man many think is their savior is moving up the inside rail. Expected to declare after Labor Day, former Tennessee senator Fred Thompson, who has neatly toggled between parallel lives in Hollywood and Washington, is supposed to rescue his party from a field of candidates who are insufficiently conservative or conservatives who are insufficiently electable. In many ways, Thompson seems like a GOP dream horse: gruff, coolly reluctant, a charismatic red-state country boy who is comfortable in his skin. Not to mention the advantage of Thompson's near-absence of a definable ideological or policy orientation which, if New York Times columnist David Brooks is correct, allows each of the heterogeneous components of the conservative movement to project its hopes and values onto him. But as NBC News political director Chuck Todd has argued, Thompson may have waited too long to get in the race. His campaign is sputtering, with fundraising down and rapid staff turnover -- both his campaign manager and his research director departed this week. On the other hand, given the fate of GOP front-runners thus far, perhaps Thompson should wait until Thanksgiving to declare. The undeclared candidate's rise in the polls thus far seems to be a vote for "none of the above."

The field is so feeble, and the prospects for 2008 so cloudy, that the Republican candidates, individually and collectively, face an atypically Republican problem: They don't have very much money. Maybe the late money -- the smart money -- will be there for the eventual GOP nominee. But not only did McCain's second quarter totals drop, Romney recently loaned his campaign money after raising in the second quarter of 2007 only about two-thirds of his first-quarter take. (Giuliani edged up only slightly, from $15 million to $17 million, from the first to second quarter.) All told, between April and June the top three Democrats jointly outraised the top three Republicans by a cool $20 million. When Ron Paul, Republican heretic, has more cash on hand than erstwhile front-runner John McCain, it's clear just how many Republicans still prefer none of the above.

It was all so much less complicated when there was an heir apparent. But this time around, it's not even clear what such an heir would inherit. The elephant in the room, the one the candidates prefer to ignore, is the failed presidency of George W. Bush. His legacy will be a burden to whichever Republican stumbles to the finish line. Yet in the same poll where nearly 60 percent of the Republicans expressed dissatisfaction with the presidential field, 39 percent of the respondents wanted a nominee who would continue Bush's policies, and another 39 percent want a nominee more conservative than Bush. That puts the GOP base a little at odds with the general electorate, given that Bush's approval is in the mid-20s nationally, falling into the teens in some states. The stubborn yet dissatisfied base of the party presents a dilemma for candidates who hold any hope of winning the general election. How can a potential nominee win the favor of a Bush-loving GOP base without poisoning his prospects in November 2008?

Perhaps, then, it is a small blessing to the current crop of candidates that none of them is Bush's chosen successor. The field is, at least, wide open. But without an obvious heir apparent, the Reagan rule -- the tradition during primary season of "doing no harm" to fellow Republicans -- no longer applies. Thus the war of attrition starts, and the second-tier candidates begin searching for ways to separate themselves from the other long shots and gain on the vulnerable front-runners. Lately, while Romney aims his attacks at possible Democratic opponents, posturing as the nominee-in-waiting, he finds himself a target of fellow Republicans. Sam Brownback, the Kansas senator and self-styled "true conservative" in the field, has found a particularly inflammatory way to crack the top tier. He has decided to gay-bash Romney, challenging his position on gay rights, specifically the former governor's past statements about homosexual leaders serving in Boy Scout troops. The Brownback campaign issued a statement which, in part, read: "Romney's openness to gay scout leaders conflicts with the Scout Oath, which requires Scouts to be 'morally straight.'" David Brody, senior national correspondent at the Brownback-friendly Christian Broadcast Network, writes that "once the Brownback campaign brought [these issues] up, it's fair game."

The remainder of the Republican primary season promises to be a soul-searching experience for the party that has long treated the White House as an entitlement. More comfortable taunting Democrats for lacking core principles than questioning their own, the GOP's presidential aspirants seem a bit unsure of themselves, of their president, and of their party's moral authority and political standing. One of these candidates will emerge as the GOP standard bearer for 2008, of course. But in a party with no natural heirs, it's the value of the inheritance that's in doubt. Although 15 months still remain until the election, the Republican nomination looks less and less like a golden ticket to the Oval Office than an invitation to become their party's Walter Mondale or Michael Dukakis -- a punch-line proxy for an era when the GOP lost its moorings.