Break out the antacid: This romantic comedy about a couple of chefs may leave you feeling a tad dyspeptic. 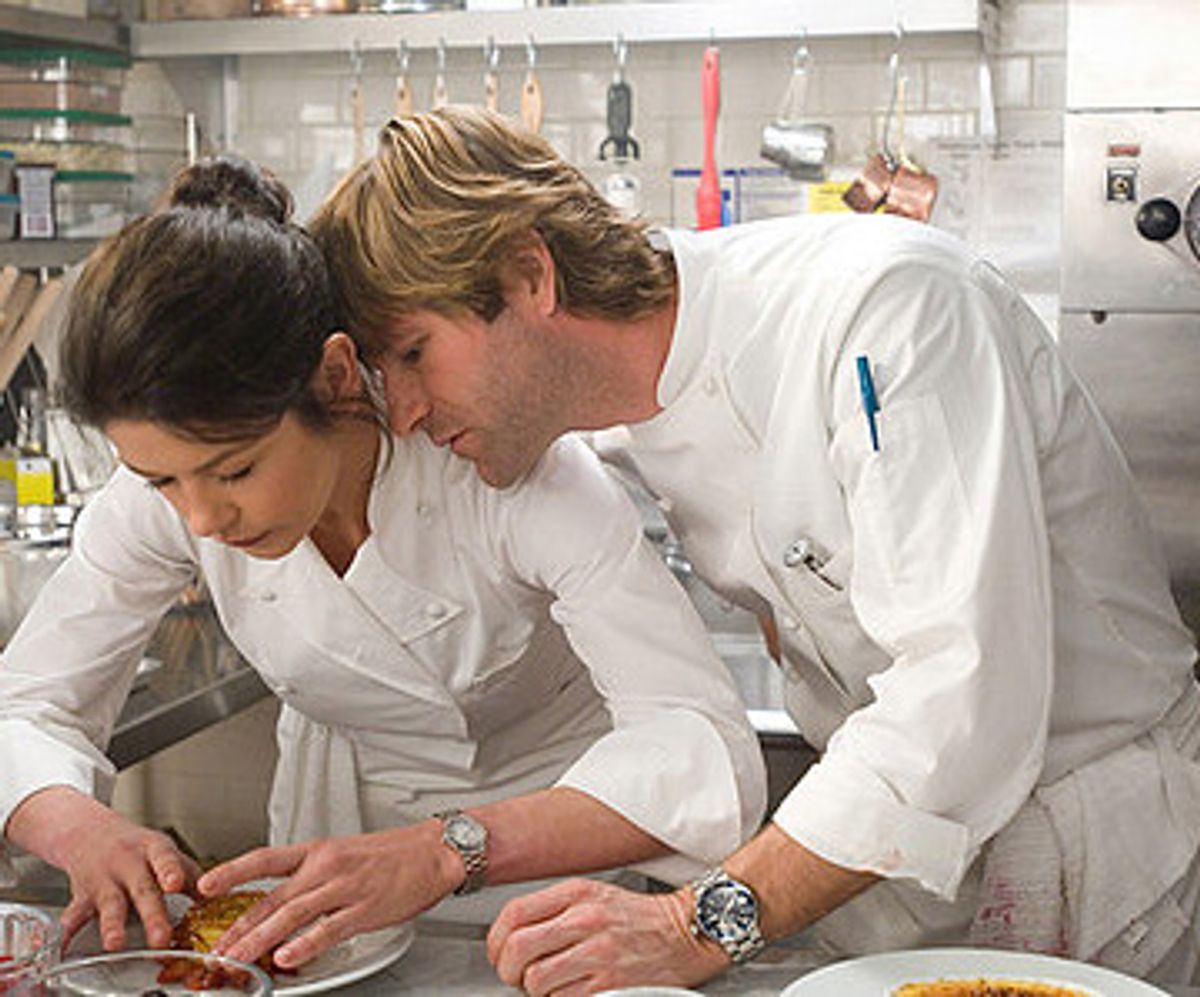 Sometimes movies make sense in a logical way; sometimes they make only emotional sense. "No Reservations" makes no damned sense at all. Catherine Zeta-Jones plays Kate, a supremely dedicated chef at a chic lower Manhattan restaurant. Kate has no personal life: She rises before dawn to hit the fish market and slips into bed right after a hard evening's work of running a superbly efficient kitchen. She's demanding, but her staff respects her; there's no evidence that she abuses them or otherwise treats them unfairly. And for the most part the customers adore the food, though when they urge the restaurant's owner, Paula (Patricia Clarkson), to bring the chef out so they can compliment her personally, Kate obliges only reluctantly. She's happier behind the scenes, demanding perfection of herself, maybe, but also taking pleasure and pride in delivering it.

For that reason, Kate's boss -- and the movie -- brands Kate as "difficult." Paula has even insisted, on a condition of her employment, that Kate see a shrink (he's played by a dry, waggish Bob Balaban) to help tease some of the kinks out of her so-called problem personality. But "No Reservations" has much bigger problems than Kate does: The picture, directed by Scott Hicks (the party to blame for the "he's not crazy, he's special" crowd-pleaser "Shine," although he also made the much more restrained "Snow Falling on Cedars"), tries to make us think that Kate is a bitchy overachiever when, really, she's just terrific at her job. Her world is flipped by two events: Her sister dies, suddenly and tragically, and her niece, Zoe (Abigail Breslin), is left in her care. And because Kate needs to take a little time off from work, the restaurant brings in a hotshot up-and-comer named Nick (Aaron Eckhart), who threatens her professionally and also rattles the alleged cage around her heart.

The movie tells us, in firm visual terms, that Kate and Nick are opposites: When she goes to work, the long, long stems beneath her spotless chef's tunic are always clad in neat black trousers. Nick wears comfy chef pants with zingy-bright fish printed on them: What a fun guy! He also plays opera in the kitchen, which supposedly loosens up the staff and makes everyone work more efficiently. Mostly, though, when Kate first steps back into that kitchen, he seems to be just horsing around, waxing poetic about Pavarotti when he should be hustling his ass to make sure the quail doesn't turn to rubber. (He's also ignoring that the woman who has just appeared in front of him lost her sister less than a week before.)

But in this excessively artificial movie world, Nick serves a very important purpose: Kate needs him in order to discover what has been missing from her life. There's nothing wrong with that general conceit. It's that "No Reservations" doesn't make you believe in it for a minute. Kate struggles at first to make friends with, and soothe, the troubled Zoe. She prepares special meals for her, serving up a whole sea bass, head and all -- yuck! But later, after her shrink plants the idea, she comes up with an offering that might be more appetizing for a kid, a plateful of fish sticks. There's no doubt she's really trying, and getting closer every day to getting it right.

Her love affair with Nick takes forever to get cooking, and once it does, we're treated to the usual movie montage of the three of them, Nick, Kate and Zoe, wandering through New York enjoying all its wonderful sights and flavors. By the time that four-minute interlude is over, it's time to hustle on to the inevitable conflict, although, of course, everything will end happily. Remind me again why anyone should trek out to see a mainstream romantic comedy anymore?

The script here is by Carol Fuchs (based on Sandra Nettelbeck's screenplay for the German film "Mostly Martha"), and you can almost smell the sweat pouring off the actors as they try, valiantly, to make the darned thing work. Breslin, who was admirably poised amid the indie shtick of "Little Miss Sunshine," shows the same good instincts here: Even when Hicks clumsily and cheaply plants the camera's gaze on her grieving face -- she has just learned her mother is dead -- she survives the moment with her dignity intact. Eckhart, an enormously appealing actor in general, is too aggressively adorable in his early scenes; later, he relaxes a bit, and he's more fun to watch. (He has a lovely scene with Breslin's Zoe, who has been refusing to eat; he whips up a dish of spaghetti in the restaurant kitchen and then simply leaves it, with no entreaties and no special urging, for her to discover.)

Zeta-Jones can't quite find the center of her role, either: She's too warm and glowing a presence to be believably icy and remote, at least in this movie. Still, she's at least open and alive to the camera. And there's something a little insulting about the movie's premise to begin with: It suggests that a woman who's good at her job, and who takes pride and pleasure in it, must necessarily have some glaring lack that needs to be filled. That's not the same as suggesting that we all get lonely sometimes, that we're designed to want and need someone to love. "No Reservations" features lots of scenes in which Nick and Kate enjoy the sensual pleasure of well-prepared food. But it's still not nearly as smart about the joys of eating, and of love, as the summer's other restaurant movie, "Ratatouille." A rat in the kitchen tops a comedy in a rut.