Bart, Homer, Marge and the rest of the gang wreak their lovable havoc on the big screen. 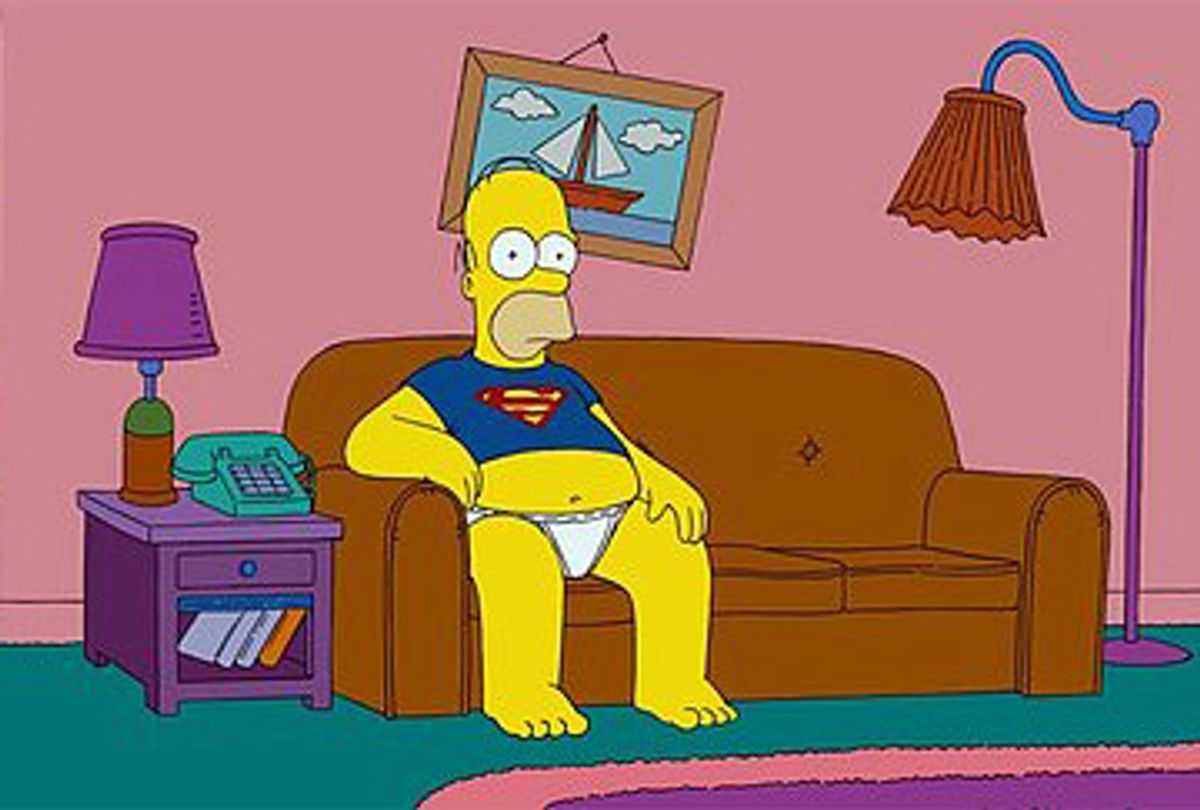 For an animated television show, surviving 18 seasons and 400 episodes may not be as great an achievement as successfully filling up, and living up to, the big screen. I say that not because "The Simpsons" isn't a wonderful show but because it is: Week after week, its creator, Matt Groening, and the people who have guided the show over the years (including James L. Brooks and Brad Bird, as well as its numerous writers and animators) have given us seemingly tossed-off vignettes of offhand genius. The wonder of the show is that nothing ever feels overworked: Clever sight gags sail by on skateboard wheels, giving us just the right amount of time, down to the split second, to take them in. (When Homer Simpson, playing hooky from church on a Sunday, makes a fat, gooey waffle, he doesn't just butter it -- he wraps it around a stick of butter, a death falafel.) Even the show's overarching, semiserious themes -- a favorite is the idea that anyone, even the hapless, seemingly hopeless boob Homer, can learn to become a better person -- are always punctuated by a burp or a butt crack. If there's a god for individual TV shows, the deity of "The Simpsons" isn't the one depicted on the ceiling of the Sistine Chapel, but the novelty-store T-shirt version of the same, the one who urges Adam, his greatest creation, "Pull my finger."

The Sistine Chapel ceiling isn't a bad metaphor for "The Simpsons Movie," if only for the way Groening and Brooks (two of the 11 screenwriters who worked on the picture) and director David Silverman ("Monsters, Inc.") find so many smart ways to use the movie screen's larger canvas. The story -- and I promise to give you only the barest rundown -- is an environmental epic laid out in a series of elbow-noodle turns: Lisa (Yeardley Smith), at 10 the conscientious elder daughter of the family, launches a campaign to clean up the ultra-polluted lake in the town of Springfield, where the Simpsons live. The presentation she gives to the town assembly is called "An Irritating Truth." Simultaneously, Homer (Dan Castellaneta), in between the eating of doughnuts, instigates an environmental disaster, involving a silo marked with the nearly poetic legend "Pig Crap." Meanwhile, id-kid Bart (Nancy Cartwright) skateboards nude through the town, on a dare from his father. And Marge (Julie Kavner), she of the blue beehive and quavery vowels, busies herself trying to talk sense into her husband (a practically futile task if ever there was one), tending to baby Maggie (who wanders, Swee'Pea-like, into various blithe misadventures, including an encounter with a backyard sinkhole) and doing her best to keep the house tidy. In one of the movie's sweetest touches, she pauses during a life-and-death moment to grab, wash and wipe a single plate sitting in the sink, as perfect a summation of her dedication to her role as you could wish for.

The bigger idea wrapped around the higgledy-piggledy plot details of "The Simpsons Movie" -- the waffle around the butter, if you will -- involves not just the necessity of taking care of our planet but the importance of flexibility and forgiveness in family life. The latter, especially, is a favorite "Simpsons" theme, but what keeps it from ever being cloying, in the show and in the movie, is the way Groening and his writers so persistently revel in bad parenting -- a bold, gleeful exaggeration of the style of parenting many of us grew up with, in the '50s and '60s and into the '70s, when parents raised kids even as they were also busy smoking and drinking in the backyard, instead of organizing every minute around the children's activities and imagined needs.

Despite the fact that Homer allows -- no, encourages -- Bart to hang from the edge of their house's roof, you can never quite call him a bad parent: He always comes through in the clutch, more or less, making him a vital and concrete metaphor for the imperfection of human beings, and of parents -- either the parents we are or the parents we had, or both. That, and he eats all the things we wish we could eat (and some we don't) without guilt or reservation.

Cartoons that work beautifully on TV often get swallowed up by the big screen, as anyone who sat through the static and dopey "Beavis and Butt-head Do America" will recall. But with "The Simpsons," the filmmakers find inventive ways to use the extra acreage available to them, expanding on the show's various mythologies without sacrificing its loose-limbed, easygoing intimacy. One of the recurring gags of the show is that no one knows exactly where Springfield is. When the Simpsons' deeply religious and even more deeply annoying neighbor Ned Flanders (Harry Shearer) takes Bart on a hiking trip, he waves at the vista spread before them, like a map of the territories of L. Frank Baum's Oz, and tells Bart that from this single spot, they can see the four states bordering Springfield: Ohio, Nevada, Maine and Kentucky. But the movie's most brilliant moment is a gag involving a (cartoon) penis and a very long hedge. Even if you could get away with the subject matter on TV (which you couldn't), it would be a stretch to make the gag work visually. Here, it's an example of the filmmakers' exalting in the wide-open territory of the big screen instead of fearing it.

I went into "The Simpsons Movie" in a lousy mood and came out on the other side of the conveyor belt, reconditioned and rejuvenated. The picture works because, despite the fact that it took nearly six years for the filmmakers to bring it to the screen, it doesn't strive for greatness. It's fleet, concise and clever in a nut-ball way. On the seventh day, God looked at all he created and saw that it was good. Then he let one rip.