Move over, "Prep" and "Harry Potter" -- Taylor Antrim has written the great American (or is that Korean-American?) boarding school novel. 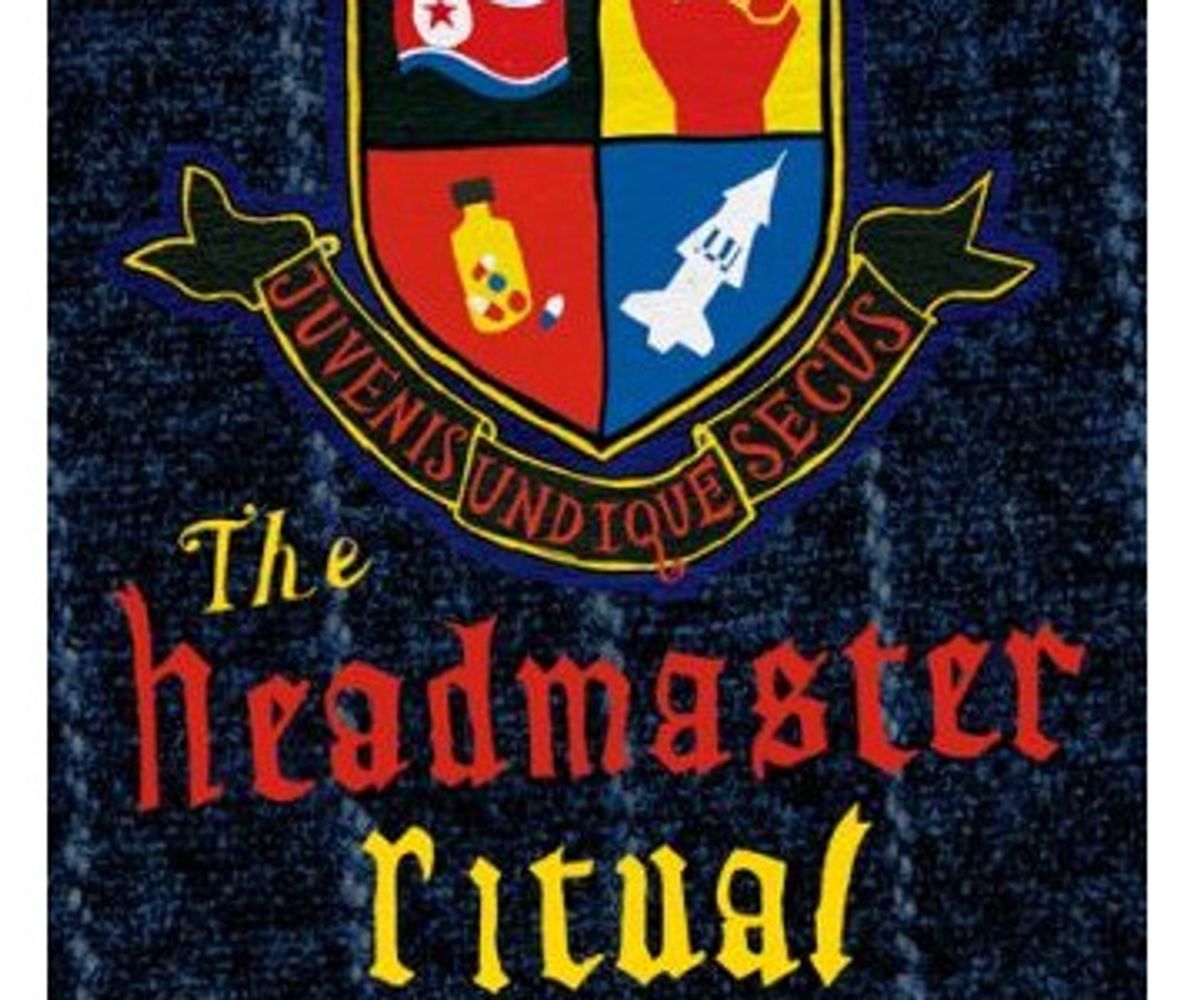 The appeal of the boarding-school bildungsroman is contradictory. The classics of the genre, at least in its modern incarnation, aren't really about the privilege that permeates the setting. Indeed, an anti-materialist tone generally creeps in, and the reader is pretty much guaranteed that the protagonist will be having a miserable time. The books, then, resonate because they make geographic and social isolation stand in for the loneliness of the soul in formation. The dorms are emotional pressure cookers; the quad and dining hall and field house are stations of the cross. Mid-century offerings like "The Catcher in the Rye" (1951) and "A Separate Peace" (1960) are still in currency alongside more recent examples such as Curtis Sittenfeld's exquisite mope-fest "Prep" and the Harry Potter books, which for all their magical invention have an angst-filled hero at their core.

Set at the fictional Britton Academy in Massachusetts, Taylor Antrim's debut, "The Headmaster Ritual," initially appears to be a modest entry into the field. With its shades of Andover ("The country's current president, at least two senators he knew of, the secretary of state: all Britton alumni"), the school is "a game preserve for New England Wasps," according to Edward Wolfe, the recently arrived headmaster. But Wolfe's pedigree is both Harvard and Students for a Democratic Society, and it soon becomes clear that he has his sights set on activities and causes beyond the school's -- and country's -- borders: namely, the plight of North Korea.

One of the book's two main protagonists, Dyer Martin, has left behind an imploding relationship in California to teach history at Britton, and his first meeting with Wolfe should have tipped him off that he wasn't signing up for the Mr. Chips role: The headmaster invites Dyer to his daily six a.m. Korean martial arts exercises. (Later that day, a fellow teacher refers to the headmaster as "Comrade Wolfe.")

The other central character is James Wolfe, a smart, awkward kid who also happens to be the headmaster's son. This year he's forced to live in a (reliably savage) dorm in order to find his own feet, or else to accommodate his father's extramarital carousing -- which might explain Wolfe's departure from Harvard for the world of secondary education. Hazed and humiliated by jocks and legacies, and hopelessly drawn to Jane (the ex of a popular student whom his father booted last term), James muddles through what is shaping up to be a high-school year that's even more of a minefield than usual.

Though "The Headmaster Ritual" never makes you laugh out loud, it's aerated with a steady current of institutional black humor of the "Lucky Jim" variety. The novel eventually clears its own weird path away from its illustrious and popular forebears by dint of its surprising engagement with North Korea. Wolfe, with convoluted (and indeed, quite insane) educational, fundraising and revolutionary ideas in mind, asks Dyer to assemble a shock troop of his students -- including James -- into a North Korean delegation for a Model United Nations conference (held at the real U.N. building), where a bizarre, violent spectacle has been staged.

"The Headmaster Ritual" has a pop veneer, nodding to Wes Anderson's "Rushmore" (the ultimate prep school movie) and cadging its title from one of the Smiths' bleaker songs (which is saying something). The novel's international touch is initially disorienting, an apparent shift in scope and tempo, but it soon becomes unusually satisfying, as much for adding brio to the plotting (how else are you going to top Hogwarts' VI-form wizardry?) as for its rich metaphorical possibilities.

The North Korean principle of "juche," developed by the country's founding father, Kim Il Sung, translates roughly as "self-reliance." As Dyer coaches his students in the country's tormented worldview, we can see how such a philosophy -- not to mention the extremes of rhetoric and behavior -- might strike a chord with his students.

Dyer synopsizes North Korea for his team: "Speak out against the Dear Leader, and you get sent to a gulag," to which one student responds, "Cool." Dyer continues, "But we don't have unrest. We're not racked by revolution. We're not yearning for international investment, and we don't want tourists. We don't like people telling us what to do, or showing us how to live. We like our misfit status."

It's grandiose, of course, to compare a teenager's emotions to a country that seems, to most Western eyes, to be in a constant tailspin. But this is Model U.N. -- a simulation and simplification -- and "self-reliance" emerges as a viable code. Everyone at that age identifies with the misfit.

Cut off by pride and circumstance from the rest of the world, North Korea also works as a symbol for Britton and boarding schools in general, with their antiquated traditions about which nobody outside its halls -- save alums -- can expect to care.

James gives an impromptu, impassioned speech at the U.N. ("Provoke us at your peril"), a performance designed in part to impress his father. This resonates with a central North Korean drama during Kim Il Sung's life: the perception by critics that his son, Kim Jong Il, couldn't match up to his father -- a kink in the idea of dynastic succession. And James isn't the only one with daddy issues. Before coming to teach, Dyer, abandoned by his father as a child, ineptly lost half a million dollars of his would-be father-in-law's money on a bad real estate transaction. Having a successful career at Britton means pleasing Wolfe, acceding to his bizarre demands.

Antrim capably depicts campus life, from the "wingbone-shaped, iron and steel-cabled sculpture" (hilariously titled "Stress") to Dyer prepping for class late at night, listening to a student "drilling the opening licks of Led Zeppelin's 'The Ocean' on an unplugged Fender next door." Occasionally a cluster of descriptions surfaces where one would suffice. Britton is "a hushed refuge, a ringed enclave. A fresh start"; Dyer's flight from domesticity is a matter of "patrimony, of DNA, of blood-borne instinct." But mostly the writing is assured, fluid without being flashy. This restraint allows for subtle connections, as in this passage in which James contemplates the dashing of his modest dreams:

That future he'd imagined on the bus, all the possibilities on the horizon, like a distant sparkling skyline, now looked like a fragile mockup, a thin, Disneyland diorama of the years to come. He was scared.

The metaphor seems too simple at first glance, but as the scene shifts from tawdry utopia to nightmare, Antrim is also conjuring the desperate billboard optimism of North Korea, of its capital in which, some say, only good-looking people are allowed to live. ("Pyongyang is like a huge stage set," wrote Ian Buruma in 1994.)

It's strange and perversely inspiring to think that Antrim, an editor for ForbesLife (CapitalistToolLife?), has written a book in which one of the world's last communist holdouts, a perpetual pariah state, gets something amounting to sympathetic treatment. I suspect most readers will learn more about that country's agonizing history here than they ever have. Without intending to, Taylor Antrim has written the great Korean American boarding school novel.

Ed Park is a founding editor of The Believer.