Why I pick lettuce for the Black Panthers

I worry that Alice Waters' crusade for local, seasonal food isn't reaching the people who really need it. 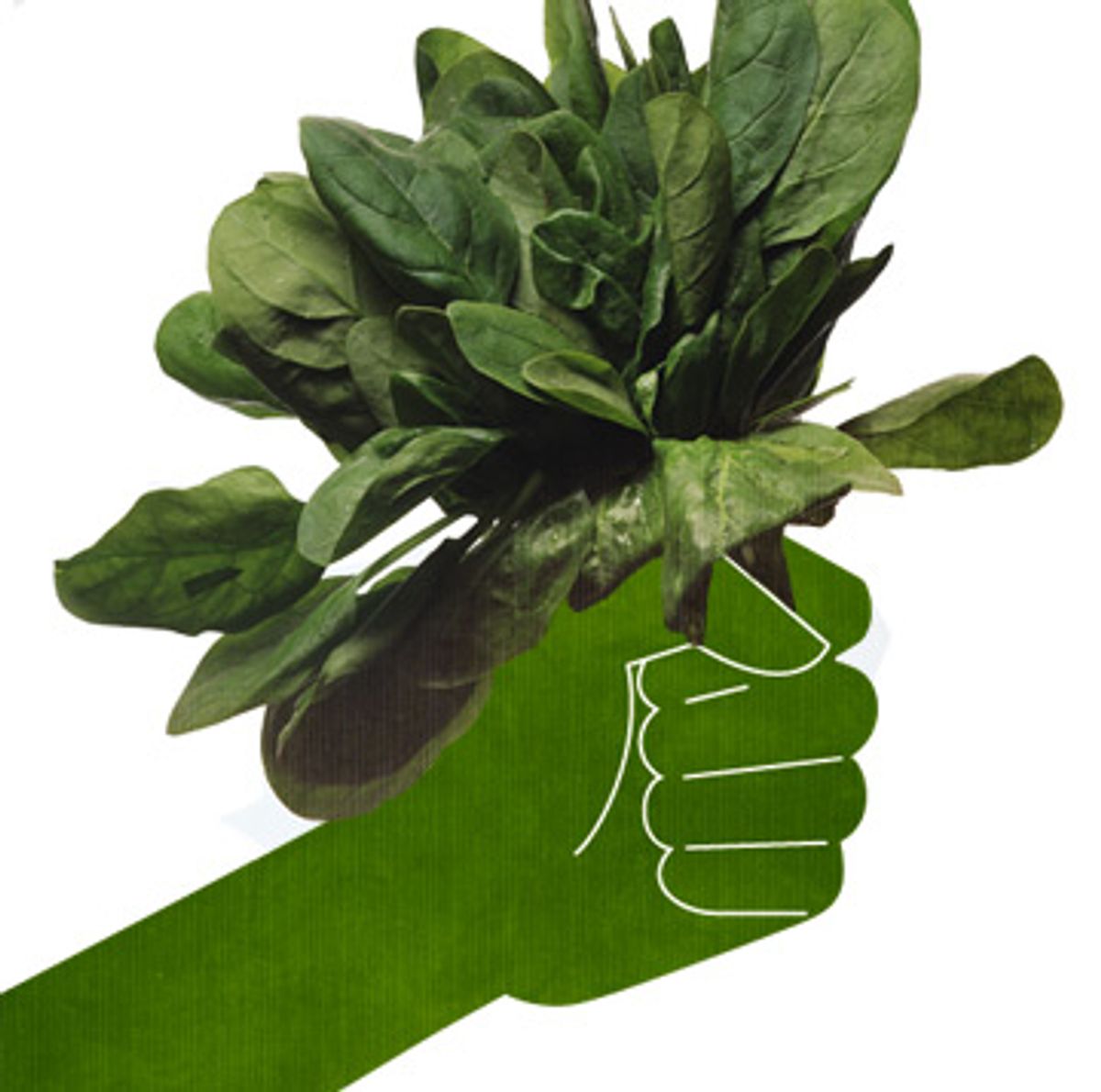 Thursday's my harvest day for the Black Panthers. I begin in West Oakland, Calif., at an urban garden run by the not-for-profit City Slicker Farms. The beds are chock-full of roaming squash plants, beets and collard greens. I'm here for the lettuce. I might choose the red frilly Outredgeous, or the chartreuse black-seeded Simpson, or the Bronze Arrow; whichever looks the largest and healthiest, I pick five heads. Then I bike back to my own backyard plot 20 blocks away, in a run-down area of Oakland called Ghost Town, where I pick basil, marjoram, mint, wild arugula and edible flowers (nasturtiums and borage) to add to the mix.

I want the Panthers to enjoy a gourmet salad, you see.

In the Bay Area, home of Alice Waters, the high priestess of seasonal food, and slow food's ground zero, boutique grocery stores evangelize about eating fresh and local. Browse around one of these sedate shops and you'll find local hand-molded goat cheeses, fresh bundles of escarole and rustic bottles of cold-pressed olive oil from Napa Valley. All organic, all regional and all expensive.

I think about Waters' words while I triple-wash my lettuce and herbs, then pack them into plastic bags. She's right that when you eat a salad fresh from the garden, it tastes vital and truly nourishing. But the kids in my neighborhood eat Cup-a-Soup for breakfast and Cheetos for lunch. Eldridge Cleaver once said, "Black children who go to school hungry each morning have been organized into their poverty." The chances of my neighbors encountering a salad that has "an aliveness" to it are slim.

When most people think of the Panthers, they think of black men wearing leather jackets and carrying guns, or the famous photo of founder Huey Newton sitting in a wicker throne with a spear in one hand, a shotgun in the other. What have been forgotten are the free medical clinics, the bus service for visiting prisons, the breakfast programs for kids and the thousands of bags of food handed out to needy folks. David Hilliard's photographic history of the party, "The Legacy of the Panthers," quotes a Black Panther newspaper: "It is a beautiful sight to see our children eat in the mornings after remembering the times when our stomachs were not full, and even the teachers in the schools say that there is a great improvement in the academic skills of the children that do get the breakfast." In the 1970s, a school run by the Panthers called the Oakland Community Learning Center served breakfast, lunch and dinner to all of its students.

I first met the Panthers six months ago on the UC-Berkeley campus, where I attended graduate school. A young guy with cornrows yelled from his booth, "Support the Panther Party!" My mom was active in the civil rights movement, so I went over to have a look. "So I can help?" I cautiously asked the other man at the booth, Melvin Johnson -- all the while remembering a scene from the Malcolm X movie where a blond lady's help is rejected.

"Well, I don't have time or money, but how about vegetables?" I asked.

I wrote down my name and number and in a few days Johnson called me back. Turns out Melvin Johnson is a very tenacious fellow. A writer friend of mine said he gave Melvin his number in order to volunteer, and every week for a year, Melvin called. I was glad I hadn't made my offer of vegetables without having something to back it up.

Willow Rosenthal, the founder of City Slicker Farms, and a dear friend, grows tons of vegetables (literally) on her urban farms. With her organization's help, once a week I can deliver enough salad for the entire Panther literacy program. When I first told her about the project, she admitted that the Panthers were one of her great inspirations. "Hell," she said, "we'll plant a Li'l Bobby Hutton memorial plot of lettuce!"

Before noon on delivery day, as I whiz up Martin Luther King Way on my ten-speed, a bag of salad greens gently rocks on the handlebars. I spot Johnny, the watermelon man, tending to his produce stand. A bit farther on, a man sleeps in an overturned refrigerator box, arms flung out like a baby. Invariably there's another man or woman with a shopping cart filled with recyclables headed to the transfer station down the street. On a few stretches of MLK, lumbering Magnolia grandifloras grow overhead, their leathery leaves and giant white blossoms so pungent you can smell them even under the stench of Highways 980 and 24.

Acts from people's lives play out on the streets and sidewalks like Shakespearean drama. Whole families sit near the curb, chairs placed just so, to take in -- or be part of -- the day's events. A person on a bike gets to be part of this sidewalk theater. Usually I get a sweet "Hello, good morning"; sometimes I witness a hot dice game, whose rules, once explained to me but never practiced, I've now forgotten. The previous night, I listened to a woman demanding money from the father of her son. While she ranted (from the seat of a Hummer) his friends recorded the performance on their cellphones. "You're acting like some kinda Michael Jackson," she growled, and the Hummer screeched away. The man and his friends cried out at this dis, slapped street signs and groaned.

After 30 flat blocks, the landscape changes. I'm in Berkeley. There's a Nuclear-Free Zone sign and then the gleaming giant words "THERE" and "HERE" -- a piece of public sculpture that has always rubbed me the wrong way. "There is no there there," Gertrude Stein famously said of Oakland, her hometown. Seventy years later, does Berkeley, land of Priuses and million-dollar bungalows, really have to remind us?

At Alcatraz, I turn east for half a block, and I've arrived. A gold embossed sign above the door reads: "The Commemorator." A quarterly published by the Commemoration Committee for the Black Panther Party, the newspaper has a circulation of 10,000 and specializes in stories for the black community. It was started in 1990, a year after founding Panther Huey Newton was shot in Oakland in August 1989. The remaining members of the party feared the positive legacy of the Panthers would be lost.

I ring the bell and Johnson lets me in. He's tall and handsome, but seems bogged down by his formidable tasks, which include coordinating his all-volunteer organization, managing the office and, when I saw him last, holding a picnic for 300. The office smells of sandalwood incense, and on the wall are drawings of Black Panther all-stars. There's Al "Bunchy" Prentice and Mumia Abu-Jamal and an oil pastel of a Black Panther youth group -- all hand-painted directly onto the wall.

Johnson takes me back to the kitchen to do the lettuce handoff. Sometimes I bring shredded beets, which he loves. The lettuce goes into a salad that is served at the youth literacy programs run by the group. These programs, along with the paper, are the last vestige of the Black Panthers' legacy.

A stocky, muscular man with kind eyes spots me and says, "Hey, is that the salad lady?" He's the other Melvin. Melvin Dickson was an original Panther, in charge of all things culinary for the Bay Area Panthers from 1972 to 1982. I was curious to hear about the food programs from Dickson, so we sat down for a chat. Before joining the group, he was a cook in the Navy, but he then realized he could help the Panthers more by serving healthy food.

"One thing we imparted was a nutritious diet. That's why we fed them three meals. And for a while we were not serving red meat -- only chicken and fish," Dickson chuckled. "Tofu. I learned to cook tofu. I cooked with brown rice. It was new and I learned to like it."

I confess to Dickson that one reason I want to donate the salad is because I see the kids in my neighborhood eating junk food. "Kids are hyper on that junk food," Dickson said. "You've got to challenge them, educate them, get them to try new things."

To her credit, the Panthers' neighbor, Alice Waters, has also turned her focus to schoolchildren and food. In 1995 she started the much-lauded Edible Schoolyard Program at the Martin Luther King Middle Jr. Middle School in Berkeley. Children there are encouraged to learn by growing, harvesting and cooking their own food. Folks like Waters and activist chef Ann Cooper are also trying to change the way school kids eat lunch, motivated by the frightening upward trend of juvenile diabetes cases and the possible link to carbohydrate- and fat-packed school lunches. A Paul Cézanne quote on the home page of the Edible Schoolyard Web site declares: "The day is coming when a single carrot, freshly observed, will set off a revolution."

The Panthers' Ten-Point Program lists demands regarding employment, an end to police brutality, education and healthcare for "our black and oppressed communities." The final program point reads: "We want land, bread, housing, education, clothing, justice, peace and people's community control of modern technology." It is followed by the first two paragraphs of the Declaration of Independence, the document that embodied the ideas of the American Revolution. It's more badass than some white lady's "delicious revolution," but rooted in the same concept. "We have a saying in the Black Panthers," says Dickson: "It's the blacks today, but it's you tomorrow."

This is why I bring lettuce to the Panthers every week. I know that one salad on one day isn't going to save a life or a city. But I worry that Waters' message about local food isn't reaching the very people who need it the most, that maybe the person who most needs to try a real salad, picked that morning, isn't a customer at Chez Panisse or a kid at a Berkeley middle school but a young, poor black kid trying to learn how to read.

Maybe if all of us made a gesture toward sharing the good food of the earth, it would truly start a revolution.