This tiny machine is stylish, silent, cheap and innovative. If engineers work out the kinks, it could be revolutionary. 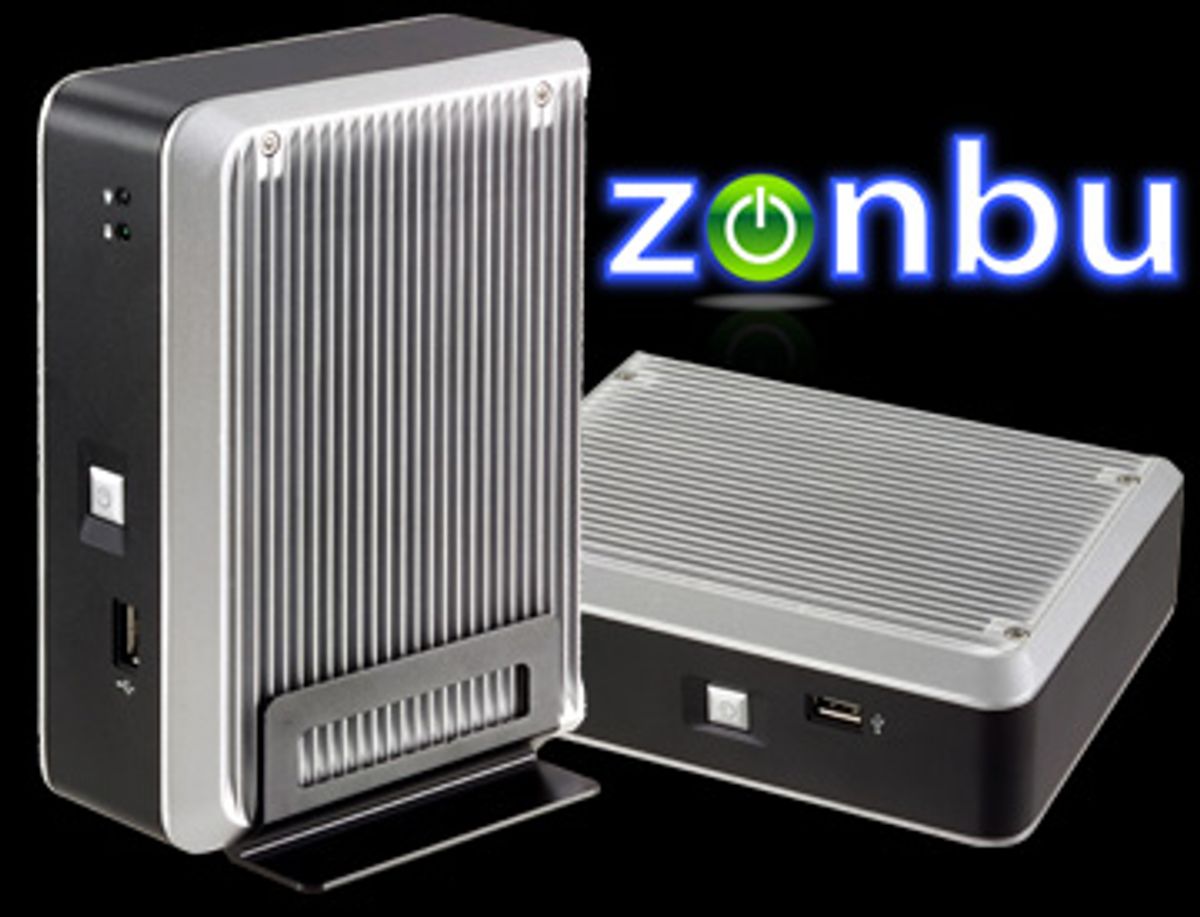 I'm typing these words on a computer that is not really a computer at all, and is instead better described as a desktop outpost to a cloud of data stored on server farms all over the Internet. This outpost is tiny -- about the size of a clock radio -- and resplendently silent. It contains no moving parts, and uses a third as much energy as an incandescent light bulb. The machine, which goes by the name Zonbu, is also stylish, easy to use, virus-free and, best of all, cheap -- you can get one for just $99. The price reflects an innovative business model, one inspired by modern computing realities: It's what's on the network, and not what's on your machine, that really matters. So you should pay for the network -- in this case, between $13 and $20 a month -- and you ought not spend much at all on that hunk of hardware on your desk.

I've been using the Zonbu for about a week, and were it not for some annoying kinks (more about those soon), this is a computer I might be moved to love. As it is, I can say that I'm in love with how it looks on paper. Though companies have attempted to create lightweight, network-dependent "thin clients" in the past -- and subscription-based PCs are also nothing new -- the Zonbu represents the best implementation I've seen of a new kind of machine, one whose functionality rides upon a foundation of robust network access and free and easily available Web software. More than that, it's very friendly to the environment. The Zonbu is the first consumer computer that meets the EPEAT "Gold" standard, the highest rating given out by the nonprofit group the Green Electronics Council.

Just about every aspect of the Zonbu is innovative. Its creators, entrepreneurs Grégoire Gentil and Alain Rossmann, developed the system for less than a million dollars in investment, using a bevy of open-source software and a crew of developers flung across various parts of Europe and South America. At its heart is a low-power Intel-compatible processor made by the Taiwanese firm VIA, as well as a very slick version of the Linux operating system (the flavor is Gentoo, for those of you who care about such things).

Though you can use it to do just about the same things you'd do on an ordinary Mac or a PC -- surf the Web, do e-mail, play music and movies, chat over IM, and tangle with office productivity tasks like a word processor and a spreadsheet -- the Zonbu contains no hard drive. Instead, it has a small 4 GB CompactFlash card for local storage (the sort of card digital cameras use to store pictures), but it keeps most of your stuff online. Zonbu contracts space from Amazon.com -- the retailer leases its servers out to Web developers -- and this explains the monthly fee. You pay Zonbu $12.95 a month to get 25 GB of online space, $14.95 for 50 GB, and $19.95 for 100 GB.

Grégoire Gentil is a loud, gregarious Frenchman, a computer engineer by training, and a true geek at heart. A few weeks ago he came over to Salon's offices to talk about Zonbu. His inspiration for the machine, he says, was his father's Windows PC. "I would go over to Paris for the week and spend the whole time getting the spyware off his computer," Gentil said.

The Zonbu is a computer meant for people like Gentil's father -- for non-geeks, for people who want to run just a few programs without any hassle. Because it's silent (it contains no cooling fan) Gentil believes the Zonbu would be ideal as a second computer that you can keep in the kitchen or the living room. Maybe you use a Mac to edit your HD movies and a Windows machine to play games, but the Zonbu's cheap enough that you could consider buying it as well.

In my tests I found much to love about the Zonbu's hassle-free philosophy. First of all, it looks great. The Linux OS has been beautifully crafted to resemble the familiar setting of a Windows or a Mac, mimicking much of the "look and feel" of computing environments you're used to. There is no learning curve to Zonbu.

Within a minute of loading up the system, I was on the Web. The Zonbu comes installed with Firefox, and every Web site or add-on to the browser that you've used on other systems works well here: Gmail, Google Reader, YouTube and other sites I use all the time were the same on Zonbu as on any other machine. Zonbu also comes with the Open Office word processor, spreadsheet program and presentation manager -- these are open-source, free alternatives to Microsoft Word, Excel and Powerpoint. They take some getting used to, and I wouldn't want to write a book on the word processor here, but for little tasks, they work well enough.

Other apps already loaded on Zonbu include Skype; an IM program; an e-mail and calendar manager; a graphics and Web page editor; and several small games. (See the full list here.) But that's all. Zonbu has locked down the system from other programs -- that is, you can't download something from the Web and install it on your Zonbu. I've criticized this setup on the iPhone, and I think it's a strike against the Zonbu too. In the company's defense, though, Gentil says that locking the machine is the only way to ensure that the system does not get bogged down with spyware. Moreover, he notes, the Zonbu is not meant to be a do-everything PC -- if you need an obscure program, download it on your Mac or your PC.

The programs that do come with it work quite well, and the machine excelled at several everyday computing tasks. It easily found other computers on my home network, and I transferred several large movie and music files from my Windows machine without any trouble. Despite its low-speed processor, the computer played most of the media files without skipping or halting (it could not decipher some of the video files and played only the audio; often this is a problem people fix by downloading special "codecs," but you can't do that on Zonbu).

I then tried to transfer the music to my iPod Shuffle. The machine recognized my iPod and loaded up a music library program called Banshee. (There is no iTunes for Linux, and thus Zonbu cannot play most songs you purchase from the iTunes Store.) The music slipped easily from the Zonbu to the Shuffle.

Other tasks weren't so flawless. The Zonbu recognized my Olympus digital camera, but only as an external hard drive -- its photo organizing program could not automatically import photos from my camera. I also couldn't figure out how to connect the Zonbu to my network printer. The machine located the printer, but seemed not to have the necessary drivers to use it.

Zonbu's lack of local storage also bothered me. In theory, the system is supposed to upload all of your data online and download it just when you need it. There are clear benefits to such a plan; because your house is much more likely to get robbed or burn down than Amazon's servers, keeping your files online is safer than keeping them at your house (the data is encrypted to hide it from prying eyes). Online storage also lets you access your files from the road. Anything you do on your Zonbu becomes quickly available to you anywhere else -- I'm typing this review at home, but were I to go into the office later, I'd be able to get to it there through Zonbu's Web interface.

Files are supposed to fly between your Zonbu and the Internet transparently, without your noticing. The trouble is, they don't. When I tried to play a music file that my Zonbu had shipped off to the Internet, I often had to wait 20 or more seconds for the machine to download the full file. Only then did the music begin to play. Perhaps as a result of some kind of bug, the Zonbu often tried to download the same file several times; that is, a song would stop midway through, fly back over the Internet to my machine, and then it would start playing over again.

Though the Zonbu is on sale now, it is still officially in an unfinished "public beta" mode, and engineers are hard at work fixing many of the problems I've highlighted. I hope they pull it off -- it'll be good not only for the computer-addled public, but for the planet, too.

In order to meet the EPEAT gold standard, the Zonbu uses very little energy -- 131 killowat-hours per year compared to 1,534 killowat-hours per year for a standard PC, according to Zonbu. To put it another way, an ordinary PC uses energy equivalent to 107 gallons of gasoline a year, producing 2,071 pounds of carbon dioxide emissions. The Zonbu uses less than one gallon of gas and produces less than a pound of global-warming emissions. (This does not count, though, the power Amazon uses to store your data.) The Zonbu was also built in a way that eliminates the use of cadmium, chromium, certain plastics and other unsavory materials found in other computers.

Considering the environmental benefits, then, if Gentil and his team perfect their system, maybe you can shut off your main machine and turn to Zonbu full time.