In this exhilarating action threequel, Jason Bourne emerges as the sort of troubled but resolute hero the world needs most. 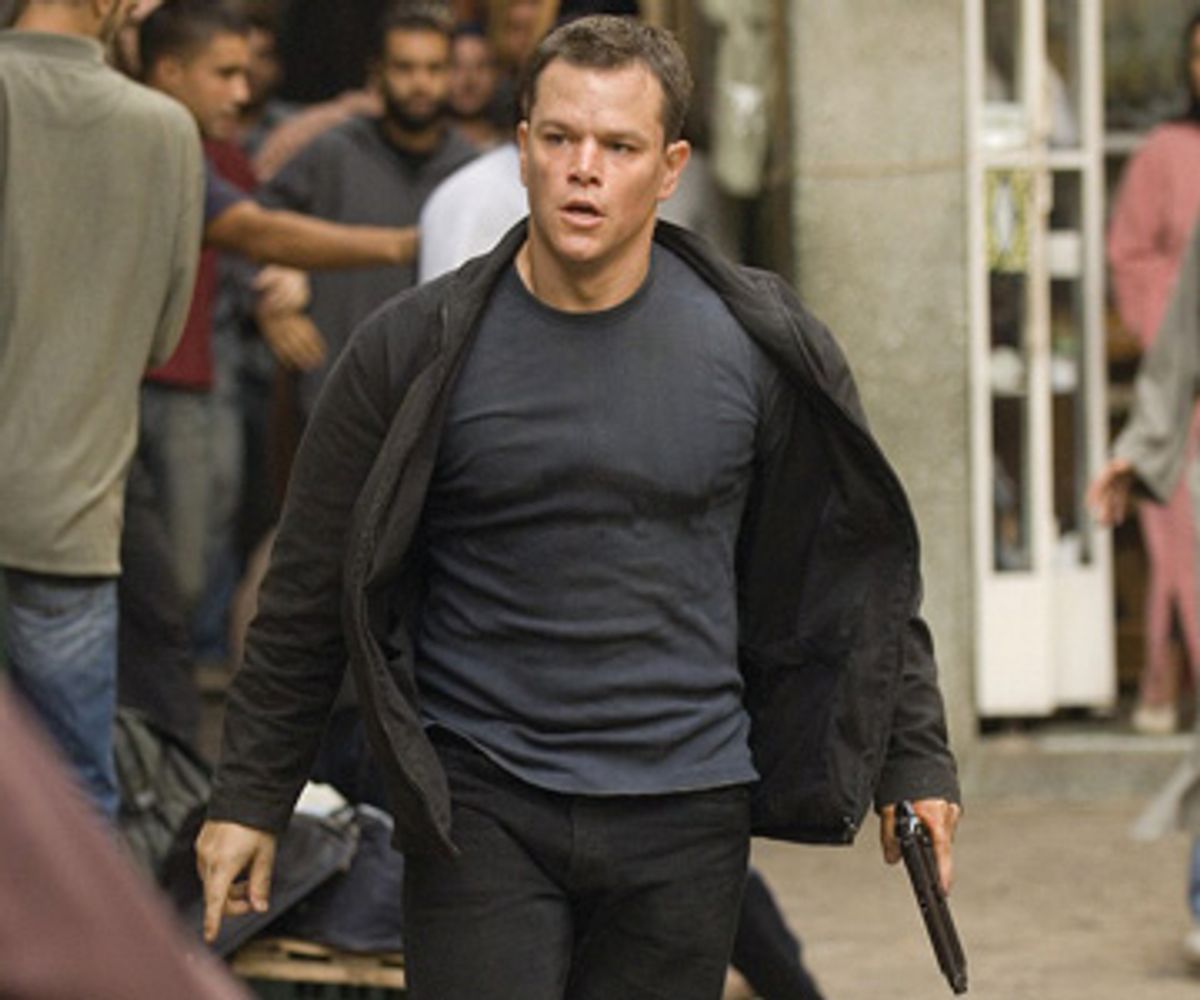 Jason Bourne, in theory, could be George W. Bush's dream historian, a loyal foot soldier who has been conditioned to obey and serve but whose mind has been broken and reconfigured to conveniently forget certain details and fixate on others. You couldn't find a better candidate to sit down and write a glowing record of the W. presidency. It would be a masterpiece of selective memory -- except for the fact that Jason Bourne insists on trying to use even the parts of his brain that don't work.

When Robert Ludlum wrote the Bourne novels in the '80s, he probably didn't conceive of his character -- an amnesiac killer who hunts his targets with machinelike efficiency, even as the remaining shreds of his human decency cloud his brain like tattered ghosts -- as a freethinking leftist American patriot. But in "The Bourne Ultimatum" -- the third picture in the Bourne franchise, and the second to be directed by extraordinary English filmmaker Paul Greengrass -- Jason Bourne emerges as the kind of troubled but resolute hero we most need these days, a figure who insists on peering through the murk rather than letting it block the truth. Jason Bourne, clawing his way out of madness, still has a conscience even though he has lost most of his mind.

"The Bourne Ultimatum" is a great action movie, exhilarating and neatly crafted, the kind of picture that will still look good 20 or 30 years from now. And while it isn't a cheerful picture, I found it to be an oddly comforting one, perhaps more so than its two predecessors, 2002's "The Bourne Identity" (directed by Doug Liman) and Greengrass' 2004 "The Bourne Supremacy." In "The Bourne Ultimatum," Jason Bourne's isolation feels weightier and more oppressive than ever. But then again, sometimes -- particularly if you're killing people and you don't know why -- isolation is the only appropriate feeling. There's a way in which Greengrass and the movie's writers, Tony Gilroy and Scott Z. Burns, make Jason's separateness so palpable that it's practically a communal state, something that draws us closer to him rather than distances us.

In all three of these movies, Jason Bourne -- played by Matt Damon, an actor so old-fashioned all-American that he looks as if he'd be most at home in one of those 1940s football costumes with the leather helmet -- knows he's a killer; he simply has no idea what his motives are, or who or what may have instilled these murderous impulses. At the beginning of the second film, "The Bourne Supremacy," Bourne's girlfriend, Marie (played by marvelous, openhearted actress Franka Potente), is killed suddenly. She has been trying to help him remember who he is, and to find out who's instigating these ruthless missions. "The Bourne Ultimatum" simply drops us into the middle of Jason's story and assumes we're hip to it. But even at this point in Jason's nightmare adventure, as he sprints to keep at least two (and often 20) paces ahead of the top-secret CIA forces that are trying to kill him, Marie is still a not-so-spectral presence. In "The Bourne Ultimatum" he explains to Nicky (wonderfully stern and serene Julia Stiles), the young CIA agent who keeps looping into his story, "I can see their faces -- everyone I ever killed. I just don't know their names." And then he adds, as if struggling to retrieve stray scraps of memory from the corners of his brain, "Marie would try to help me remember their names."

In this moment -- and in many other moments in the Bourne movies -- Damon, who seems to be a perfectly fine actor locked behind that nominally uninteresting yearbook-picture face, is a figure of solitude straight out of an Edward Hopper painting, although this guy isn't just alone with his memories, he's alone, period. Bourne isn't the prototypical American loner hero, the upright stoic type who knows what's right in his slow-moving bones. (For one thing, his bones move too fast: The chase sequences in all the Bourne movies are marvelous, but in "The Bourne Ultimatum," Greengrass brings them to a level of artistry, and of mounting horror, that tops even what has come before.) Bourne is a U.S. citizen, but more essentially, he's a citizen of the world: "The Bourne Ultimatum" jumps from city to city -- London, Moscow, Paris, Tangier, New York -- as if national boundaries were just bothersome fences begging to be hopped. Bourne travels light (although even his single knapsack is laden with meaning), and he seems to speak every imaginable language, presumably because of all the evil CIA training he has received, but that doesn't discount the reality of his need for connection and communication: For Bourne, all soil is foreign soil, which means that home could be anywhere or nowhere.

I think fans of the previous two Bourne movies may fear that reading too much about "The Bourne Ultimatum" could spoil their pleasure of it. But there's barely a plot to spoil -- there's only movement, and sensation. Joan Allen reappears as Pamela Landy, the CIA honcho who's entrusted with trapping the elusive Bourne, even as her sympathy for him (and her distrust of the organization she works for) increases. Paddy Considine plays an earnest Guardian journalist whose title is "security correspondent," and if any actor has the face of an earnest Guardian journalist, it's Considine: Even his eyes ask unanswerable questions. Scott Glenn appears as the lizardlike director of the CIA, who wants his orders followed without having to dirty his own mitts. David Strathairn is a Company bigwig, an arrogant mirror image of the Edward R. Murrow he gave us in "Good Night, and Good Luck." And Albert Finney, an actor whose face I don't believe I could ever tire of, appears as -- well, that you really don't want to know.

Greengrass doesn't pace "The Bourne Ultimatum" in the usual way, building tension and then allowing it to release before starting up the whole process again. Instead, he uses the movie's first few minutes to establish a pulse. After that, all of the movie's beats -- its anxious moments and its calmer ones -- hit in response to that pulse. Greengrass' methods as a filmmaker have always felt more organic than mechanical, especially in his greatest picture, the 2002 "Bloody Sunday," an account of the Jan. 30, 1972, massacre on the streets of Derry, Northern Ireland, in which 13 unarmed civil rights protesters were killed by British soldiers. Greengrass doesn't shy away from making the horrors of history feel immediate and disturbingly alive.

Maybe guys like Greengrass should be reserved only for serious pictures about serious subjects, movies like "Bloody Sunday" and "United 93" (the latter a picture whose mere existence I have problems with, as much as I respect Greengrass' technique and approach). Then again, action movies desperately need more guys like Greengrass. The violence in "The Bourne Ultimatum" is exciting, all right. But very few contemporary directors know how to film action and violence with the kind of chaotic clarity Greengrass does. That may seem like a contradiction, but Greengrass knows how to use a movie frame so we know where to look every instant -- and still, we can't ever be certain that we're catching it all, because violence by its nature is unmanageable. In a street chase sequence set in Tangier, Morocco, Bourne runs for his life through courtyards and across rooftops, leaping from building to building through windows that aren't always open. Part of the sequence involves a motorbike chase, but Greengrass presents it as an example of boyish shenanigans with real-life consequences. And in the fight sequences, Greengrass never lets us forget that every landed punch causes real pain: One, in particular, is so beautifully choreographed that it left me feeling a little heartsick, as if I'd just watched a perfectly executed tragic love scene. In that sequence, a book is used as a weapon, a bitter rejoinder to the generally comforting idea that books are our friends.

"The Bourne Ultimatum" is a movie packed with exploding fragments of information. As Bourne repeatedly rattles the padlocked chain wrapped around his memory, we see and hear shards of the past he can't remember: Bourne hooded and bound, being roughed up by men whose faces we can't see; voices speaking in broken-up phrases (" ... tank treatment ..." "... hasn't slept for 52 hours ...").

At one point a character states flatly, "We are the sharp end of the stick," meaning that this not-so-royal "we" answers to no one. If someone, anyone, needs to be disposed of, there's no paperwork to fill out, no clearance needed from the higher-ups. A murder can be ordered up like a pizza; a previous, sensible decision can be overturned with a single phone call. Against all of that, a guy like Jason Bourne, with his mangled brain and whirring conscience, shouldn't stand a chance -- and yet he's the last man standing. They've given him a number and taken away his name, but what he stands for can't be so easily erased.