A surge of phony spin on Iraq

Bush's backers are peddling a sunny view of the president's strategy -- despite Iraq's political chaos and soaring death counts. 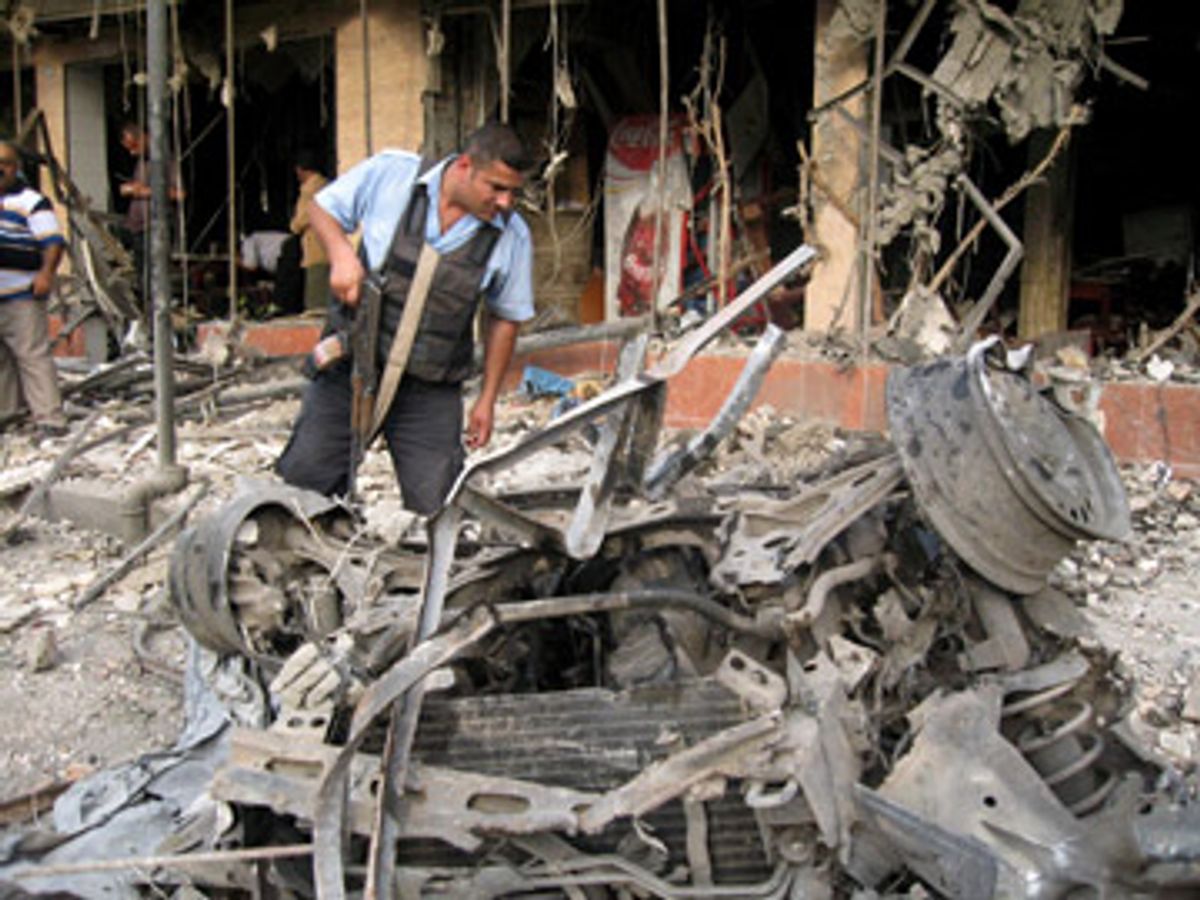 As Congress prepared to go on its August recess, Pentagon officials and White House backers were desperately spinning as a success this year's escalation of U.S. troop levels in Iraq. A recent poll shows that there has been a 10 percent uptick in the proportion of Americans who think the so-called surge, first announced by President George W. Bush in January, is having a beneficial effect. But how accurate are the sunny pronouncements coming out of Washington? What would constitute a success for the surge, and how likely is it to be achieved?

The troop escalation was intended to calm down Baghdad and to give the government of Prime Minister Nouri al-Maliki breathing room to pursue a political reconciliation, especially with the Sunni Arab population. But the political goals of the surge are simply not being accomplished -- and indeed, the political situation has deteriorated substantially.

Maliki has lost even the few Sunni Arab allies he began with; the Sunni Arab coalition, called the Iraqi Accord Front, that had actually been in his government has now had its cabinet ministers tender their resignations. He has not held further reconciliation talks with dissident Sunni Arab groups. The Sunni Arab guerrilla groups are thinking of forming an opposition political party in hopes of extending their efforts to topple his government into the political sphere. His relations with Sunni Arab neighbors are so bad that Saudi Arabia declined his request to visit Riyadh.

Developments on other fronts are equally grim. The Maliki government has lost the confidence of three other political parties, the Islamic Virtue Party (15 seats in parliament), the Sadr Movement of Muqtada al-Sadr (30 seats), and just on Monday, the Iraqi National List led by former appointed Prime Minister Iyad Allawi. All have pulled their ministers from his government. The government of the major province of Basra, source of Iraq's petroleum exports and its major port, has collapsed. The governor, from the Islamic Virtue Party, failed a vote of no confidence by the provincial council, spearheaded by a rival Shiite faction, but he refuses to resign even though Maliki backed his removal. And if Basra collapses socially and with regard to security, it is unlikely that the Baghdad government can survive.

Administration supporters have been upbeat about the way in which some Sunni Arab populations, especially in al-Anbar Province, have turned against the foreign jihadi volunteers that were behind much mindless violence. These jihadis, styled "al-Qaida" by the Bush administration, however, were never the core of the insurgency. Politically speaking, the Sunni Arab Iraqi opposition to the foreign volunteers does not imply that the Sunnis are reconciled to the Maliki government. On the contrary, the Arab press reports substantial support in al-Anbar for the withdrawal by the Iraqi Accord Front from the Maliki government, on the grounds that the prime minister heads a narrow Shiite sectarian regime that holds thousands of innocent Sunnis in prison and has been implicated in Shiite ethnic cleansing of Sunnis.

And what of the supposed "good news" on the military side of the equation? Before July ended, a spate of wire service and newspaper reports began appearing, saying that only 74 U.S. troops had been killed by Iraqi guerrillas that month, the lowest total since November and a sign that the surge was working. But the reporters and editors who gave U.S. headlines such as "U.S. Death Toll in Iraq in July Expected to Be Lowest in '07" (New York Times) were being assiduously spun. Bush officials were undoubtedly pushing the information that produced these headlines in an attempt to give Republicans in Congress some good news to take back to their constituents during the August recess.


Lt. Gen. Raymond Odierno, commanding general of the Multi-National Corps-Iraq, called the development in recent weeks "an initial positive sign." "This is what we thought would happen once we get control of the real key areas that are controlled by these terrorists," Odierno said at a press conference. At the same time, he said, "I need a bit more time to make an assessment of whether it's a true trend or not."

Odierno's performance was unconvincing to anyone who knew the score. He was speaking on July 24, well before the month had ended. By the time all the casualties were counted and reported (not until early August), icasualties.org was giving the July toll as 80, only one less than in March, during the opening stages of the surge.

Worse, comparisons to previous months in the spring don't take into account the searing summer environment. Baghdad in July is one of those torrid colonial locales of which Noel Coward was speaking in his 1923 song when he wrote that only "mad dogs and Englishmen go out in the midday sun." The dip in casualties is always substantial in July, since guerrillas usually prefer not to operate with heavy explosives when it is 120 degrees Fahrenheit in the shade.

And as a tally noted on Foreign Policy magazine's blog, the number of U.S. troop deaths in July, compared with previous years of the war, is anything but a turn for the better:

Meanwhile, the statistics for the hapless Iraqis themselves are no less discouraging. According to icasualties.org, the Iraqi civilian and military death toll from political violence in July 2007 was 1,690, a 25 percent increase from the July 2006 number, 1,280. (There was also a 25 percent increase in Iraqi casualties in July 2007 over June 2007, meaning the trend was going in the wrong direction any way you look at it.) These statistics -- bad enough as they are -- are typically understated by a substantial margin because passive tallying by media outlets misses many deaths.

On CNN's "This Week at War" for July 28, Michael O'Hanlon of the Brookings Institution said of Iraq, "I think we have reduced the amount of violence overall, but not to the point where the psychology has fundamentally changed, and Iraqi political leaders are not helping much yet in this process."

But by what measure, exactly, have "we reduced" the "amount of violence"? The continual reports of bombings and casualties in Iraq can have a numbing effect, but consider this: Iraq's population is one-eleventh the size of America's. If people were being killed on a similar scale here, we would have seen more than 18,000 deaths in July alone from bombings and political assassinations. (And this number would not even count ordinary criminal homicides, which are common in Iraq.)

Surely if the troop escalation has been working, then the number of guerrilla attacks must be declining, right? But as recently as June, according to a report by Reuters, daily attacks by guerrillas that month hit an astounding all-time high of 177.8 per day on average. That is, not since May 1, 2003, have there been as many attacks per day as in June 2007, with a total of 5,334. May's total number of attacks was similar, and year to year, the number of attacks in June was 46 percent greater than in June 2006. About 18 percent of the operations in June targeted civilians, and a slightly higher percentage were aimed at Iraqi security forces. The remainder, more than 60 percent, were aimed at U.S. troops (guerrillas launched 3,671 attacks on U.S. troops in June alone, up 7 percent from May).

Guerrillas pulled off numerous horrific bombings throughout July, many of them in central Baghdad under the noses of the U.S. military commanders. On a single day in late July, wire services reported nearly 150 deaths from political violence throughout the country, including three bombings in downtown Baghdad. Recent weeks have seen worrisome political assassinations continue, roiling civil society. Two senior aides to Grand Ayatollah Ali Sistani were cut down in the Shiite holy city of Najaf, raising fears that the spiritual leader (who is one of the few forces for peace in the country) might himself be assassinated, sparking a blood bath. On July 10, guerrillas stormed the home of Abdul Hamid Saleh, mayor of the major Sunni city of Samarra north of the capital, and dispatched him. The head of Mosul's election commission was shot to death. On July 26, gunmen in downtown Baghdad rubbed out the general director of the Housing and Construction Ministry. On the 27th, the head of the Lawyers Guild in Basra was assassinated. Sectarian death squads execute an average of 20 residents of Baghdad every day, leaving their corpses in the streets for police to find. The majority of the victims are Sunni Arabs.

Some proponents of the surge may have rightly argued that an effort to take on the guerrillas and militias will produce higher casualties in the short term -- but some of them are also saying the strategy has already begun working and is producing lower casualties and more security for Iraqis, which is a blatant falsehood.

What has surged is not calm or political compromise, but rather the number of guerrilla attacks, the number of U.S. troop deaths compared to the same months in previous years, and the number of Iraqi casualties. That some of the U.S. media and the U.S. public have allowed themselves to be manipulated into thinking the "numbers" from Iraq are a cause for optimism echoes the sloppy and wishful thinking that got U.S. into this mess in the first place.

Iraqi access to electricity and even food and water has fallen, 2 million have been displaced internally and another million abroad since April of 2003. That is not encouraging, to say the least. The "national unity government" of Prime Minister al-Maliki is on the brink of total collapse, as the bad news piles up.

Indeed, the power of positive thinking is an old American value. But sometimes it causes people to fall for pyramid schemes, or even worse.