Silly and crude, sure -- but this third movie in the Chris Tucker/Jackie Chan franchise is also strangely brilliant. 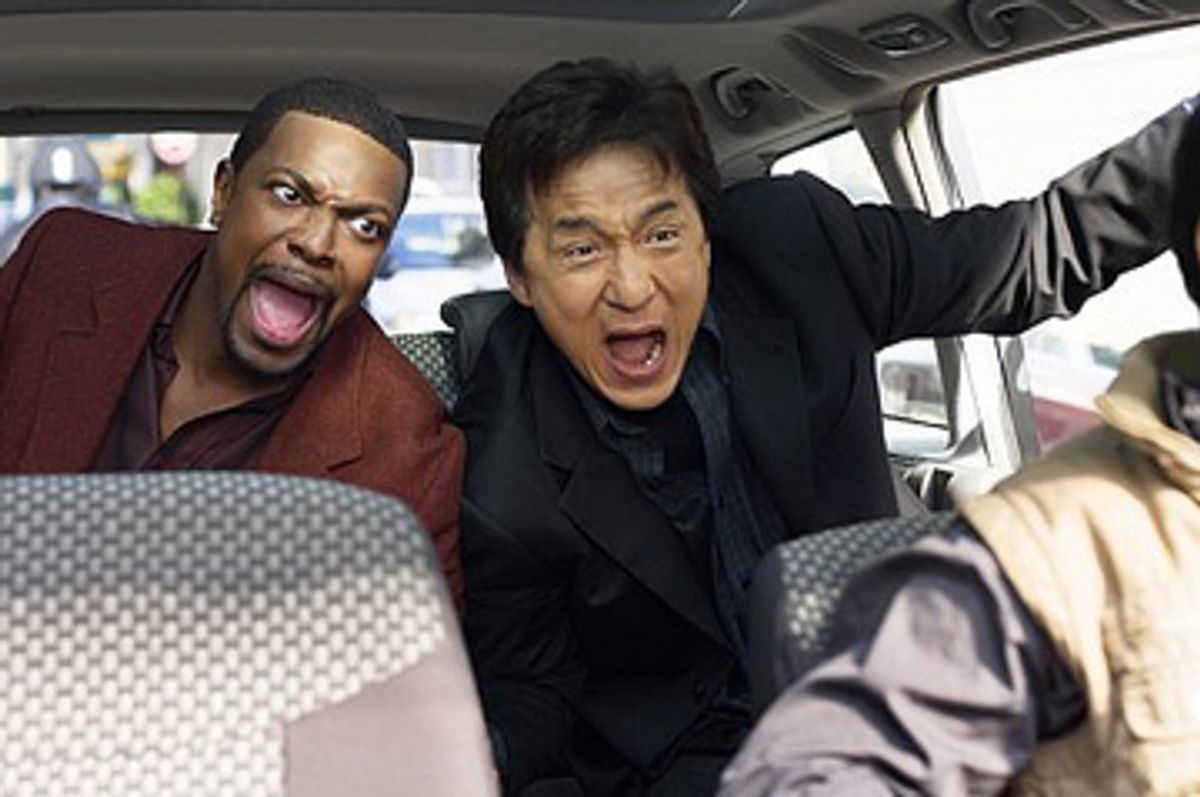 "Rush Hour 3" is crass, stupid and crudely made. It's also, in places, weirdly brilliant, a picture that plays to the largest possible audience with mechanical efficiency but also, here and there, betrays glimmers of self-deprecating cleverness, as if it were striving, perhaps even unconsciously, to transcend its own dumbness. One minute Chris Tucker is cracking lame Ex-Lax jokes; the next, Max von Sydow -- as an absurdly dignified dignitary -- is classing up the joint with his stately jowls. Exactly what is going on here? I'm still not sure, but when Roman Polanski shows up, as a disheveled, tweedy French police inspector who specializes in anal-cavity searches, he's like a walking in joke: Either you know who he is or you don't, but the movie is a little bit funnier, and a little bit stranger, if you do. "Rush Hour 3" even dares to recycle, with obvious affection, an old Abbott and Costello gag. (It kicks off with the explosive declaration "I am Yu!") I wish "Rush Hour 3" were better, but I'll grant director Brett Ratner this much: He knows that homage isn't a kind of cheese.

Together, the 1998 "Rush Hour" and the 2001 "Rush Hour 2," both directed by Ratner, made nearly $600 million worldwide. That's a lot of shekels, so you can understand why Ratner and screenwriter Jeff Nathanson (who also wrote "Rush Hour 2") wouldn't want to stray too far from an already-successful formula.

The curious thing about "Rush Hour 3" is that it makes you doubt the central equation of that formula to begin with: Tucker and his costar, Jackie Chan, have almost no chemistry. Sometimes they barely seem to inhabit the same movie. Whatever rapport they have comes through mostly in the movie's outtakes -- which are both a "Rush Hour" and a Jackie Chan-movie tradition, shown alongside the movie's closing credits -- particularly in the way Chan can always crack Tucker up with his goofily poetic malapropisms.

There's no doubt that "Rush Hour 3" is anything but a mess. And yet ... and yet. There were moments when I found myself laughing giddily at the inanity of it all, and other moments when the picture was so lavish and beautiful to look at that I almost forgot its faults. (It was shot, partly on location in Paris, by J. Michael Muro.) The story, if it matters, has detectives Carter (Tucker) and Lee (Chan) searching Los Angeles for the Triad bigwigs who've ordered a (failed) assassination attempt on a Chinese ambassador (Tzi Ma). Their search takes them to -- where else? -- Paris, that hotbed of Triad activity. The movie's climactic sequence takes place at the Eiffel Tower, and that, if Ratner actually knew where to put the camera to capture the action cleanly, would certainly be something to watch.

Still, thanks to Muro, it all looks OK, and even the script has a few surprising jolts. In Los Angeles, where the story opens, Chan and Lee capture an Asian gangster who has come to the hospital where the wounded Chinese ambassador is recuperating, hoping to finish him off. The only problem is, the gangster speaks just French, and the one available French speaker is a nun, Sister Agnes (played with marvelous, beatific élan by Dana Ivey), whose eyebrows get a workout in response to the guy's gutter mouth. She listens to him spit and sputter and tells Carter, in measured tones, that "he used the 'N' word." Carter responds by urging her to tell the guy he's "a piece of 'S'" -- and so on. The gag barrels forward, growing more absurd and more tangled, and even though Ratner doesn't seem to have much of a gift for harnessing his actors' timing, the sequence survives his clumsiness.

There are other pleasant surprises in "Rush Hour 3": The Israeli-born, France-based actor Ivan Attal shows up as an American-hating French cabdriver who has a startling epiphany. French newcomer Noemie Lenoir plays Genevieve, a Folies-Bergère showgirl who may be involved with the Triads, and aside from being a stunning-looking tall drink of water, she has a grave air of mystery about her that adds some elegance to this wobbly picture.

My favorite sequence is a Folies-Bergère showgirls' number (although the scene was actually shot in a theater in Santa Ana, Calif.), in which a row of leggy beauties dressed in pinstripe suits pace the stage to one of the 12 greatest pop songs ever written, Serge Gainsbourg's "Bonnie and Clyde." Their trousers are the tear-away kind, natch, and the girls whip them off to reveal garter belts and stockings underneath -- although, in the sexiest touch of all, the jackets stay on. But Ratner manhandles this sequence, too. Before we've gotten enough of the musical number, Tucker has to elbow his way onto the scene and do something funny -- or unfunny, as the case may be.

The movie's biggest flaw is the way it underuses Chan. Chan's stunts are not as elaborate as they once were, though they're so beautifully executed (particularly his rough-and-tumble encounter with a mysterious character known only as "Dragon Lady," played by Youki Kudoh) that you don't really miss the breakneck craziness of the old days.

But it's frustrating that no Hollywood picture -- save, perhaps, the ridiculously enjoyable "Shanghai Noon" and "Shanghai Knights" -- has been able to showcase his subtler qualities as a comic performer. Tucker and Chan are a strange mix to begin with, and not just for the dumb, obvious reason: Tucker is an overbearing actor, the kind who'll run off with every big line without even really intending to. Chan is a charming and wonderful comic actor, but he needs room to breathe, and that's the last thing Tucker is capable of giving. So while Tucker grabs laughs with the silliest, most obvious gags -- he woos Genevieve, stroking her skin and murmuring "Jay tam!" and "Voolay voo!" -- Chan is most often left looking as if he doesn't know what movie he has stumbled into. No one has bothered to write a real scene for him, and that's a drag.

Tucker and Chan do get one marvelous sequence, although, tellingly, it doesn't even require them to be on-screen together: After a dust-up, Carter storms out of the Paris hotel room he and Lee are sharing; Lee is left on one of the king-size beds, looking forlorn. He flips on the TV and gazes at some National Geographic-style footage of Africans in tribal dress; meanwhile, Tucker skulks through Paris, and passing a TV, he catches a glimpse of a stereotypically adorable Asian child in some old movie. (It doesn't hurt that Elton John's "Sorry Seems to Be the Hardest Word" wells up on the soundtrack.)

The sequence works because it's so baldly obvious about the stereotypes the "Rush Hour" movies rely on: There's nothing inherently funny about a black cop and a Chinese cop teaming up. But in the mini-universe of this scene, everything reminds Carter of Lee and vice versa: Their differences have become everything and nothing, and that alone is a kind of kinship. Maybe there will be no need for a "Rush Hour 4."