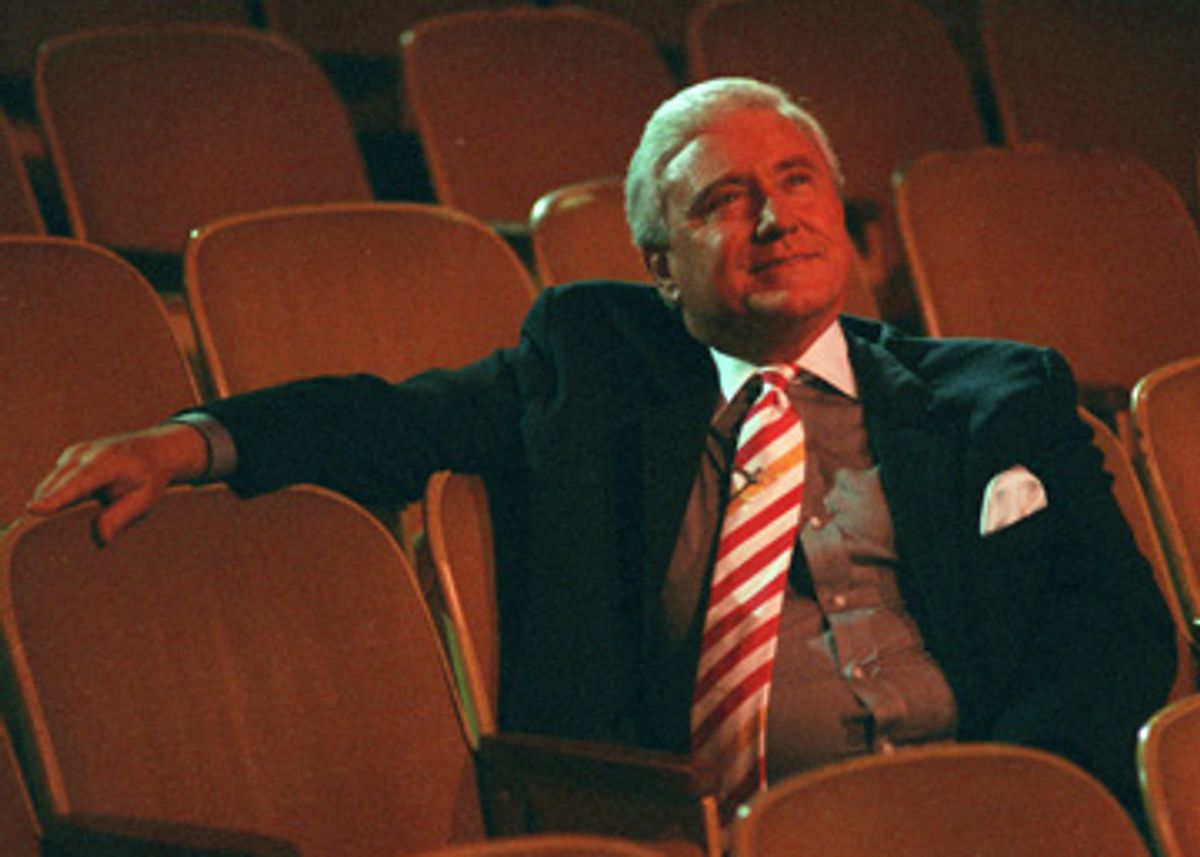 The first time I heard of a young fellow named Merv Griffin, I was singing with Kay Kyser's band. I heard a song called "Lovely Bunch of Coconuts" with Merv featured as a vocalist. He was of Irish descent, about my age, some say he even looked a bit like me, and he was singing with a big band. Like me...

I think the world of Merv Griffin. He's about as likable as people get, his show was a class act, and I like to think we were brothers in the Exalted Order of Pioneer Daytime TV Hosts... (Chicago, early 1950s)

I did the show ["Look Up and Live" on CBS] for three years. In my last season I was joined by Merv Griffin as co-host. Merv was at the time a band singer who wanted to expand his opportunities and add to his versatility. He was easy to work with, amiable, no camera hog, and quickly became a witty and skillful interviewer. My most vivid memory is of the two of us perched on high stools bantering until we broke up in laughter -- neither of us able to remember the name of the guest we were supposed to introduce. (New York, 1956)

From "An Anecdotal Memoir," by Charles Templeton (McClelland and Stewart, 1983)

Della Reese, gospel and jazz singer: "On his couch"

I had done his radio show where we formed a warm, professional bond. One of Merv's regular bits was to do the weather report to music. So the night I was on the show he did the weather to "And That Reminds Me." He started playing and spoofing. Fearing not, I jumped in with both feet. We had a ball making each other laugh. Merv was so smooth, starting up a song like "Tea for Two," for instance, singing: "On Friday, in Washington, it's true ... it's going to be forty-two." And I would sing a quick ad lib along the lines of "Yes, and in Milwaukee... they say it will be forty-three." The listeners loved it.

The next time I saw him was on his television show, which was broadcast from New York. That night, when my number was finished, Merv invited me to sit on the couch and talk to him. Completely unheard of at that time. In those days black artists with hit records were hired to sing on TV shows but were never invited to sit on the couch and be interviewed by the host. So that night when Merv beckoned me over to the couch and not only congratulated me on my song but also began to talk to me, I was almost incredulous. That gesture was most certainly an angel's. He invited me back whenever I was in New York and later, when his show moved to Los Angeles, I practically became a regular. (Late 1950s)

From "Angels Along the Way: My Life With Help From Above," by Della Reese with Franklin Lett and Mim Eichler (Berkley Boulevard Books, 1997)

Merv Griffin first entered the game-show scene back in 1958, as host for a show called Play Your Hunch ... Merv was a popular singer at the time, and Mark Goodson spotted this personable young man as good emcee material. I am sure even Mark, in his wisdom, could have had no inkling that Merv would eventually become the giant one-man conglomerate that he is today. As for Merv, the game bug must have burrowed deep in the Griffin until it ultimately surfaced in a big way with Wheel of Fortune and Jeopardy!

...I got to know Merv when he brought his nighttime talk show on the air. It was one of the more enjoyable to do, because Merv kept everyone engaged in interesting conversation, even as each new guest was introduced. I was also understandably partial to the show because he let me bring on all sorts of animals from time to time. On two occasions he invited me to host the show when he was away.

Merv Griffin has grown into a veritable mogul before our eyes. For the record, that mogul has remained the same down-to-earth, funny, warm Merv that I first met. (Early 1960s)

I used to go on Merv Griffin and I did something nobody else did. I took questions from the audience. I would just go up in front of the audience and say, "I'll answer questions about anything..."

"I would, but how would it look, a Jew catching a pig."

Merv always loved me. He saw me in Las Vegas and all during the late '60s and early '70s, he tried to get me on every show. Every day I would get a call from his booking agent to try to get me on the show because these segments were so popular. They acted like they couldn't live without me.

From "Jackie, Oy!: Jackie Mason From Birth to Rebirth," by Jackie Mason with Ken Gross (Little, Brown and Company, 1988)

While still pregnant [with son Blake], I've had to do Merv Griffin's show, when another activist cancels from stage fright. This entails smiling grit-teethed while explaining the 'Basics' ("No, women don't want to be drafted. Actually, we'd like to end the draft for men, too. No, rape survivors don't 'ask for it'..."), only to have Griffin fixate on my belly, asking, "How can you be a genuine feminist if you've got a bun in the oven?" (New York, 1969)

The flag shirt played a central role in my most heralded television appearance ... I was a guest on the Merv Griffin Show...

After introductions all around I said it was hot under the lights and would anybody mind if I took off my jacket?

"Go ahead," said mild-mannered Merv. Then I removed my jacket ... Merv tried to pretend he didn't notice I had just unfurled Old Glory.

Merv Griffin has these beautiful clear blue eyes, and as I talked to him I had the impression I could see right through his skull to an imaginary sky beyond. He decided to handle the shirt-shock with a little small talk. But eventually the topic turned from men's fashion to more serious matters. We had a little thrust and parry over the mandatory tough question, "How can you claim there's so much repression in America if you're allowed on my show?" I told him how I had just been given a thirty-day jail sentence, not for wearing the star-spangled shirt, but for the thoughts in my head... (New York, 1969)

In 1970 I was asked to play on the televised Grammy Awards show. After I played, Merv Griffin, the host, ran up and grabbed me by the wrist and started talking all this stupid bullshit. Man, it was embarrassing. I started to knock the jive motherfucker out right there on television, live. He ran up talking this nonsense that most television talk show hosts say because they ain't got nothing else to say and don't know -- or care -- about what you're really doing. They just talk to take up space. I don't like that kind of bullshit and so after that I didn't go on too many of them talk shows... (Hollywood, 1970)

From "Miles: The Autobiography," by Miles Davis with Quincy Troupe (Simon & Schuster, 1989)

Merv Griffin started having me on his show in the late seventies and was always very supportive. In fact, he was the first show I ever guest-hosted, just before I started guest-hosting for Johnny [Carson] in 1986... (Los Angeles)

From "Leading With My Chin," by Jay Leno with Bill Zehme (HarperCollins, 1996)

The Merv Griffin Show booked me...

I'd never done a television interview before, but I decided not to wait in the green room and watch the first part of the show, since I was on last, but stay in the dressing room I'd been assigned ... When I got out on stage I was startled to hear the well-organized applause from the audience.

I just looked right into Merv's eyes for twelve minutes, never dropping or raising my gaze, so I wouldn't see a camera, and kept answering questions, feeling no nerves at all. None. Merv was a marvelously attentive listener and so easy to talk to, as smooth as old satin. He did TM [transcendental meditation] every day before the show started, which might well have explained his calm and openness. I was to do his show nineteen more times before, sadly, he decided he'd had enough of it and called it off after twenty-three years.

Merv held up the book ["Scruples"] himself -- every author adored Merv for that -- and told people to go out and buy it right away. Most interviewers will, at the best, allow a five-second shot of the book jacket lying on a table... (1978)

From "Sex and Shopping: The Confessions of a Nice Jewish Girl," by Judith Krantz (St. Martin's Press, 2000)

That year, all the Los Angeles-based talk shows had us appear. It started with Merv Griffin; his show had invited Steve to be a guest. I went with him to the studio and watched in the wings as he was interviewed. For a few minutes, they talked baseball. The usual questions, Steve's usual answers. Griffin's smile seemed a little forced. He looked bored.

Then, craning his neck, he looked past Steve and right at me. "Say, Steve! Isn't that your pretty wife standing over there?"

What? "Sure is," said Steve, a bit startled by the sudden change in direction.

Griffin pointed at me and crooked a finger. "C'mon out. Cyndy! Let's take a look at you..."

From "The Secret Life of Cyndy Garvey," by Cynthia Garvey with Andy Meisler (Doubleday, 1989)