Elvis Presley was a connoisseur of macaroni salad, barbecue pizza and peanut butter. What other culinary catastrophes were hiding in his kitchen? 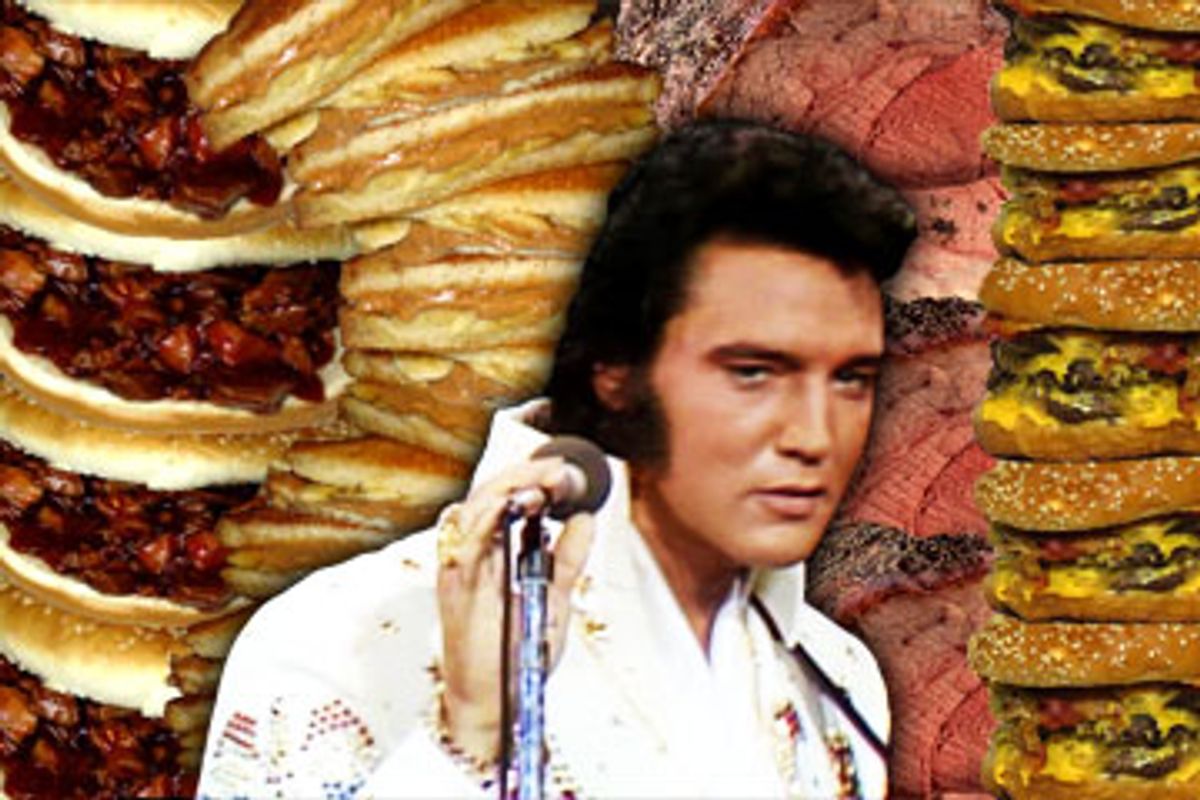 In the Vegas twilight of his career, Elvis Presley donned jumpsuits of silver lamé with electric-blue sashes, looking like an elephant in lingerie as he teetered across the stage, flinging damp hankies at his female admirers. Every bulge and bump on his sagging 250-pound physique was brazenly revealed. Who were his haberdashers? And is it still possible to prosecute them?

Now, decades down the road, fans still mourn him as a victim of drug abuse, a fallen American prince who popped uppers and downers until his 1977 collapse in a Graceland bathroom like a punctured blimp. But drugs weren't Elvis' only vice; what had he been pigging out on to make him so bloated? In observance of the 30th anniversary of his death, I decided to find out.

By now, everybody and their cousin knows that the King's favorite tuck-in was a toasted peanut butter and banana sandwich. In fact, in a 2002 feature, CNN pointed an accusatory finger at the PB&B: "This gooey concoction, fatter than a herd of hogs, was what Elvis Presley reached for when his stomach yelped." In the name of research, I found what seemed like an authentic recipe and executed it. To my surprise, it was delicious, with the salty peanut butter playing off the hyper-sweet banana. The viscous and sticky texture, too, was sublime (though I managed to splatter drops of molten peanut butter all over my jumpsuit).

It sure tasted of excess, but was it really that fattening? Using Random House's Handy Diet & Nutrition Guide, and totaling up the sandwich's component parts, I concluded that the legendary PB&B incorporates only 486 calories and 27.8 grams of fat, of which 10 grams are saturated. Compare that to a Big Mac with cheese -- 740 calories, 43.7 fat grams with 17.7 grams saturated -- and Elvis' guilty pleasure doesn't look so guilty after all. Perhaps he didn't limit himself to only one?

The PB&B may have been invented by Elvis' longtime cook and maid Pauline Nicholson, who called him Mr. P. and worked for him from 1964 till he died. Elvis was apparently very fond of her, calling her his "brown mama." She was one of the last people to see him alive on Aug. 16, 1977, when he nipped off after playing an early-morning game of racquetball. But Pauline Nicholson was not the only one in the kitchen at Graceland: no, he employed people to make him sandwiches 24 hours a day. Mary Jenkins (who wrote "Elvis, Memories Beyond Graceland Gates") was also African-American and also cooked for the King on a regular basis. She once famously said of him, "The only thing in life he got any enjoyment out of was eating."

Jenkins is featured in "The Burger and the King: The Life & Cuisine of Elvis Presley," a 1996 docudrama made by the BBC and broadcast here on Cinemax. (And you thought the BBC was a classy outfit?) According to the film, Elvis bought a house for Mary Jenkins, who maintained that after his death, she could hear him rattling around in her bathroom every night. (Maybe he was rummaging in the medicine cabinet for some Tums.) But despite the movie's penchant for ghost stories and polyester-clad impersonators, it does some decent spade work turning up Elvis' early dining history. It reports, for example, that as a child in rural Mississippi, the King ate lots of critters including rabbits, squirrels and opossums. And even before he invented his signature pelvic thrust, Elvis was into organs, especially pig's feet, ears and chitterlings. Later on, after his parents moved him at age 14 to Memphis, he ate lots of sloppy Joes at Humes High School, according to school authorities. Well, who didn't?

Maybe Elvis did try to reform his nutritional habits near the end of his life, because his personal physician, George ("Dr. Nick") Nichopoulos, claims that Presley went on a cleansing diet of papaya juice in the months before his death. That might have been what killed him. Then again, Dr. Nick is hardly an arbiter of healthfulness: He was the one who prescribed all those uppers and downers.

As an adult, according to various sources, Elvis loved meatloaf, and would eat it for days on end. Living where he did, it would have taken all the willpower in the world to refrain from gorging on Memphis' wonderful barbecue. One of his known haunts was Interstate, known more formally as Jim Neely's Interstate Bar-B-Que. Located just south of downtown Memphis on South 3rd Street, near a corner that's mainly gas stations and convenience stores, it remains a favorite of security guards, truckers and other working-class types. Signed photos of bluesmen and rockers smother the walls. Interstate is from the "wet" school of Memphis barbecue, meaning that most of the meats come extravagantly slathered with sticky sweet barbecue sauce. Those meats include beef and pork ribs, chopped beef, chopped pork, pork sausage, and something called barbecued spaghetti -- pasta mixed with barbecue sauce and tidbits of smoked pork. (Don't knock it till you've tried it!) There is some evidence that Elvis preferred Interstate's chopped pork sandwich with barbecue sauce, with the cole slaw put right in the sandwich -- a concoction every bit as gloppy as the PB&B.

Another Memphis hang that the King frequented early in his career was Arcade, a Greek diner with pink booths, founded in 1919 on South Main Street. The joint serves mainly pizzas and sandwiches, and Elvis usually sat by himself in a dark corner booth, head down, not wanting to be recognized by other diners. Reportedly, his favorite order was cheeseburgers -- well done, please. According to Elvis historian Paul Denton, "In his 20s, Elvis told Country Song Roundup magazine he could polish off eight deluxe cheeseburgers, two bacon-lettuce-and-tomato sandwiches and three milkshakes in a single sitting." Not bad for a skinny dude! He also gorged on cheeseburgers at a restaurant called the Gridiron, on U.S. Highway 51.

Among the other foods that Elvis craved -- based on Web accounts that should be taken with a grain of salt, or maybe a gram of cholesterol -- were six-egg omelets, banana pudding, cornbread dipped in buttermilk, vegetable soup, macaroni salad, weenie and sauerkraut sandwiches, grits with milk gravy, baked ham, mashed potatoes, pizzas with barbecue sauce, and burned bacon, a pound at a time. He wouldn't have liked another Memphis specialty, fried Mississippi catfish, since he hated the smell of fish. Quoth Mary Jenkins in "Elvis, Memories Beyond Graceland Gates": "Elvis didn't like seafood at all. He wouldn't let us cook it whenever he was in the house. And he didn't care for food with bones in it either, like fried chicken. He liked it boneless." Also according to Jenkins, Elvis' favorite dinner at home was roast beef, duck stuffed with dressing, string beans, creamed potatoes, mixed vegetables and biscuits. He also apparently asked her to cut his meat into bite-size pieces before she served it.

But why just read about what Elvis ate when you can make it yourself? A cottage cookbook industry has sprung up to offer recipes for Elvis' favorite foods. Some are co-authored by people who knew him, but many, like "The Presley Family and Friends Cookbook" by Edie Hand, Darcy Bonfils, Ken Beck, Jim Clark and Donna Presley Early (Elvis' cousin), are larded with jokey recipes based on titles of his songs or movies, such as Blue Suede Shoes Cream of Broccoli Soup, King Creole Lobster Bisque, Too Much Monkey Business Banana Bread, and Hound Dog Homemade Hush Puppies. Of course, no good book can exist without a sequel, so the same authors also barfed out "Are You Still Hungry Tonight?" (not to be confused with another cookbook of almost the same name) and "All Cooked Up."

Other Elvis-inspired recipe collections include "The Presley Family Cookbook" by Vester Presley and Nancy Rooks; "Are You Hungry Tonight?" by Brenda Butler; "Graceland's Table: Recipes and Meal Memories Fit for the King of Rock and Roll" by Ellen Rolfes; "Fit for a King" by Elizabeth McKeon, Ralph Gevirtz and Julie Bandy, which purports to include recipes from Elvis and Priscilla's wedding reception and the Beatles' visit to Graceland. And we can't forget "The I Love Elvis Cookbook" by Elizabeth Wolf-Cohen, which hedges its bets by proclaiming, "Most of the recipes are pretty sinful. Lots of cream, butter and bacon. Oh, yes Elvis loved bacon on just about everything, including his famous Peanut Butter and Banana Sandwich. But if that combo sounds a little suspicious, there are dozens of traditional Southern standards sure to pacify the most kingly appetite."

Even road food's royal couple, Jane and Michael Stern, jump into the act with "Elvis World." Though it isn't a cookbook, this scholarly and lavishly illustrated coffee table volume collects many Elvis-related food facts, including his favorite restaurants and an actual shopping list from Graceland, which includes, predictably enough, Pepsi, ground beef, canned sauerkraut, bacon, peanut butter, boxed banana pudding, and canned frozen biscuits. Finally, squarely in the meta-cookbook genre is David Adler's "The Life and Cuisine of Elvis Presley," which takes what might be a historio-existential view of Presley's caloric intake. "Food, his first love, was the love that destroyed him," declares Adler, while offering a slew of recipes, including one for Elvis' wedding cake, and another for "shit on a shingle," the chipped beef on toast Elvis ate while in the Army. And demonstrating, at least, that it wasn't always good to be the King.