Karl Rove sits down to an interview aboard Air Force One after announcing his resignation. 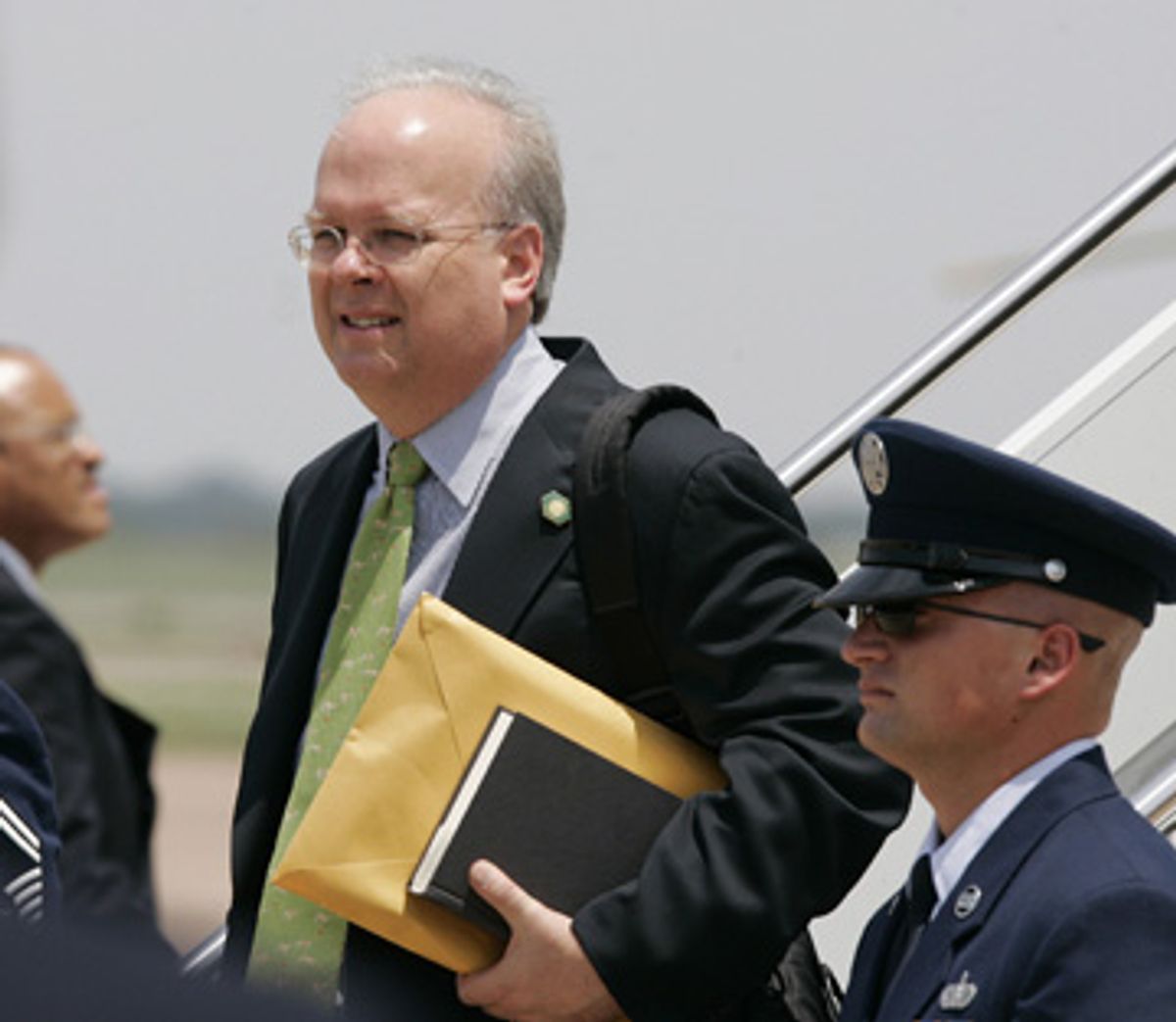 Q: Some people have said -- some of the political analysts have already said that this spells the end of -- marks the end of President Bush's political life. What do you think?

MR. ROVE: Absolutely not. Why would it? He's the President of the United States.

MR. ROVE: Well, but look, every President plays a -- even if they're not running again, plays a big role in shaping the nature of the debate, the policy debate, which in turn has a big impact on politics. And you can bet, being as competitive as he is, that he's going to use every lever he's got command over, every power that he controls to continue to drive the policy debate right up to noon on January 20, 2009.

Q: Karl, were you considering staying longer, to kind of bring home the '08 elections a little? Maybe help from the White House to pave the ground, while the other candidates are duking it out?

MR. ROVE: No, we just -- we started talking about this over a year ago and we just -- we mutually reinforced bad behavior by constantly finding excuses that we could postpone the discussion. But now is the right time to do it. It gives -- if Josh has thought through, and is thinking through -- I think he's thought through, if the truth be known, about how he wants to handle this, and this gives him enough time to both put responsibilities into some people's hands and recruit people to step in to do other responsibility.

Q: Did he ever ask you to reconsider, stay on until the end of the term?

MR. ROVE: You know, here's the deal, I mean, we talked about it. When you've got a good friend and you talk through it -- look, both of us would have liked to have been in a place where we both could have walked out, where I could have followed him out the door on the 20th. But I've got a family, and I've asked my family to go through a lot and to sacrifice a lot. And this all actually started with things in our family, talking about what the future would hold for us. And as time went on it became clear that it was time for us to think about the next chapter.

Look, I love my job. I have fun. It is a joy to walk in the door. I have the most incredible colleagues in the world. And I know it sounds corny, but it's inspiring to walk into the Oval Office, the tone he sets, you know, the good nature he has, the focus, the vision -- it's inspiring. And I deliberately used that word today because he just -- he makes it a wonderful place to work. And my colleagues make it a magical place to work. And you have such a sense of satisfaction of serving the country and doing important work in combination with some really extraordinary people. And would I like to enjoy that right up until January 20? You bet I would; 526 more days of that would be great. But I wouldnb

Q: Do you feel like any unfinished business as you leave, particular issue or --

MR. ROVE: I mean, you know, look, that's it -- I mean, the President is an activist President. We face a big set of votes and discussions and debates this fall on Iraq, on the budget -- which is not just about spending. Imbedded in each one of those appropriation bills are serious policy questions. We have initiatives on energy, on education, on No Child Left Behind, which is coming through, on health care. There will be a State of the Union next year, which will also help shape next year, as well.

So, look, there's a robust set of issues that we're dealing with. And, again, I'd love to be around for them. In a way, I'll be kibitzing from the outside -- he knows my phone number and I know his. But, no, there's a lot of unfinished business ahead and we're in the midst of some very important things.

And we're winning some of these battles. The Competitive Initiative, which he laid out in the State of the Union, I believe last year, has just now been signed into law. We have No Child Left Behind, which we can either do by law or regulation -- we want to do it by law. The energy, 20-in-10, which we can do both by legislation and regulation, some of it embodied in various legislative proposals on the Hill.

Look, the President did not come to occupy this office. He came to fulfill his responsibilities to press the agenda every single day he's in office.

Q: So are you replaceable then?

Q: Is anyone else on the White House staff replaceable?

MR. ROVE: Everybody is. Except two.

Q: Karl, can I ask you, I know you mentioned your family as being a big issue here. There's obviously been pressure that's come to bear on you -- the investigations and subpoenas and the like. Has that affected your family? Has that in any way figuring in on your decision to leave?

MR. ROVE: It's not figured in my decision, no. I think they are only vaguely aware of the subpoenas. They obviously were more than vaguely aware of the investigation. And look, I'm realistic enough to understand that the subpoenas are going to keep flying my way. I'm Moby Dick and we've got three or four members of Congress who are trying to cast themselves in the part of Captain Ahab -- so they're going to keep coming. But anybody who suggests the investigations had something to do with getting me out is sort of putting Congress in the position of being the rooster that believes that by crowing loudly brings the sun to come up.

Q: But are you protected now, in terms of legality? I mean, because of executive privilege? How does that work now?

Q: So what are you going to do? I mean, you know campaigns, you know the game. What's on the agenda?

MR. ROVE: I have no idea. I'd like to teach eventually, but in the meantime I need to make some money. I have an employment record that I think would be attractive to any employer: I've worked in an industrial kitchen in a hospital; I've waited tables; I've worked in convenience stores and have been robbed at the point of a gun twice; I've pumped gas; I've babysat; I've cut lawns; I've delivered newspapers.

Q: Do you have your own characterization of any effect you've had on the modern election campaign and electioneering?

MR. ROVE: I think there's the mistaken impression, and then there's the reality. The mistaken impression -- in fact, I talked with a colleague of yours not too long ago about this, the idea that this is all about playing to the base; that supposedly the success of the two campaigns have been that the President played to the base of the Republican Party. Completely inaccurate.

I hope that this idea holds currency in the high councils of the Democratic Party, because it absolutely misses the story of 2000 and 2004, let alone the President's time in office. The base is something that's by its very nature a small part of a greater thing.

Q: So what's your advice to the Republican front-runner coming up?

MR. ROVE: Well, I don't have advice -- my advice is for the Republicans, which I think, frankly, has become ingrained in the DNA of the Republican Party, which is that in order to win, the Republican Party needs to mobilize a vast army of volunteers to expand the electorate by emphasizing an agenda that is prospective in nature, that looks to the future and says, this is what we intend to do for America, and is bold and clear, but is focused on saying to people, we know you're not enthusiastic about politics, but if you love your country, if you care about the future, here's a message that hopefully will attract you to coming out and registering and voting.

That's why President Bush in 2004 got 25 percent more votes than he got in 2000 and became the first presidential candidate since 1988 to get a majority of the popular vote. He won 81 percent of the counties in America; he increased his share of the vote in 87 percent of the counties in America. He got a record or historic number numbers among Latinos, Jews, Catholics, women -- erased the gender gap. And it was because -- not because he played to the base but because he played with a broad and bold message that was able to attract -- think about it, one-quarter more people voted for him in 2004 than voted for him in 2000, and he did that in the midst of an unpopular war, with a united Democrat Party, and being outspent by $148 million, which is, if you add up what the DNC, the Democratic 527s who carried Edwards raised and spent, compared to Republican 527s, RNC and Bush-Cheney, we were outspent by $148 million.

Q: Do you think the public has a misconception of you?

MR. ROVE: I'm not certain I understand what's -- other than that I'm the evil genius, yes.

MR. ROVE: Well, that is -- that's not me. That's an attack on the President. That is the critics of the President trying to be cute. This guy is a Yale undergraduate and history major, a Harvard MBA, and one of the best-read, most thoughtful people I know. Now, I know he likes to play sort of the Midland/West Texas -- but he is smart. And the "Bush's brain" was, interestingly enough, a construct of two journalists as a way to diminish him by suggesting that he wasn't capable of developing his philosophy or his approach or his ability to win elections; somebody had to do it for him, which is incredibly demeaning and really stupid. And I don't mind saying that the two guys that coined it are stupid in their characterization.

Q: Who's winning your book-reading contest?

MR. ROVE: I am crushing him this year, second year in a row. He keeps using this pathetic excuse that he's got the free world to run and that he's leader of the free world, but I mean, that's cheesy, I think.

Q: By February we're going to know pretty much the Republican -- by next August we'll know the Republican nominee. Are you ruling out that you'll be working as an official advisor?

MR. ROVE: I won't fill an official role, formal role in any campaign.

MR. ROVE: Permanent? Nothing in politics is permanent. Things tend to be durable. And do I think? Yes. Look, between 1896 and 1932, there were Democrat Congresses and eight years of a Democrat President. You know, the Democrat domination between 1952 and 1994, Democrat control of the U.S. House of Representatives, there were Republican Senates and Republican Presidents. In fact, during the period of Democrat dominance from 1932 until you pick the ending date of the New Deal, you have Dwight Eisenhower and probably Richard Nixon to account for in the middle of that, if you count the New Deal is largely dissipating by 1980. I think frankly the New Deal coalition lasted until the '90s; I think we're seeing the break up of the New Deal coalition in the attempt by both parties to form a new coalition in the aftermath of it.

Q: But will yours be lasting -- do you still see 2006 as a temporary setback?

MR. ROVE: I do. But, look, I'm also realistic enough to know that it all depends on -- the election in 2008 is important because the contest is -- the electorate is so narrowly divided, albeit I think the Republicans have structural advantages, but I understand that it's so closely divided that the outcome in 2008, 2010 and 2012 are going to have big impacts on the future.