Contrary to some purists' claims, the popular video game is inspiring kids to rock out for real. 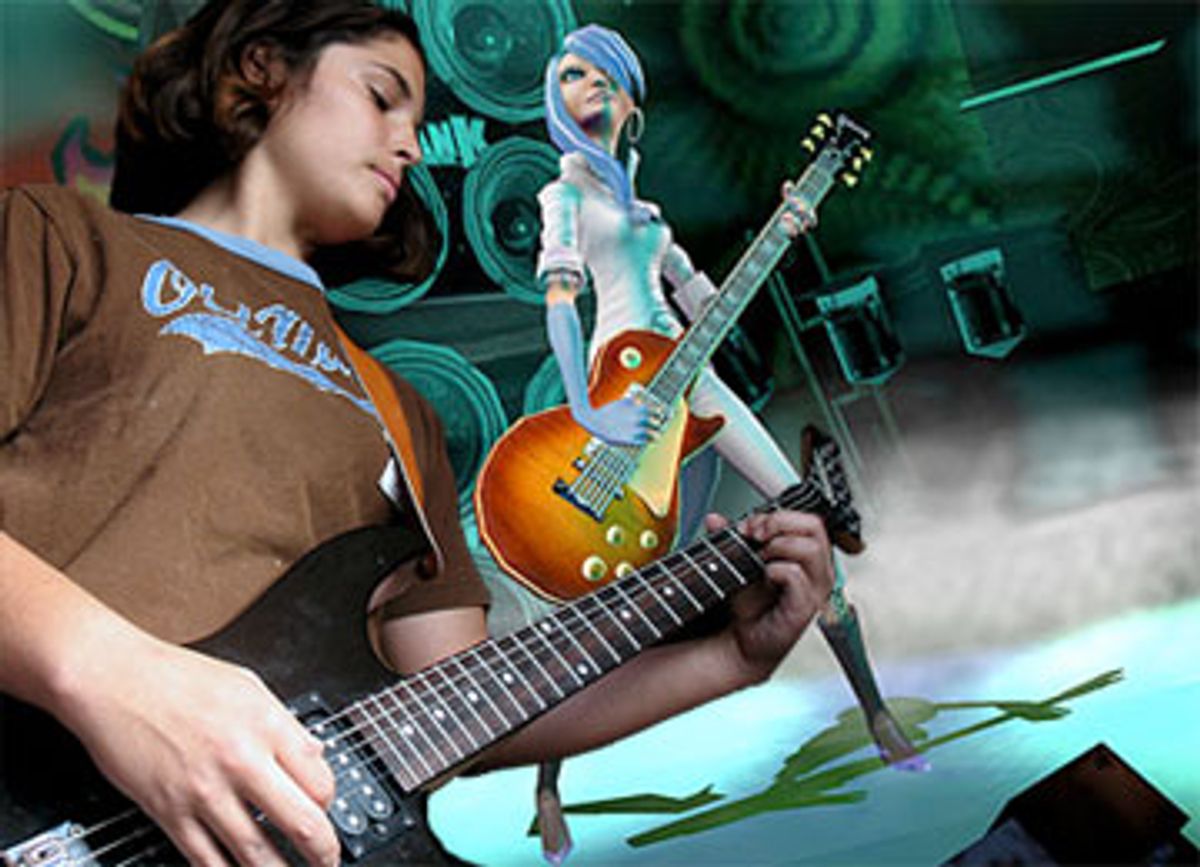 Early in July, Rusty Shaffer, the founder of Optek, a small music company in Reno, Nev., visited Salon's offices to show me his invention, the Fretlight guitar. Though it looks and feels like a standard, rock 'n' roll-ready instrument, the Fretlight contains a set of LEDs invisibly embedded inside its fretboard -- connect the guitar to a computer and the lights spark up to indicate where to put your fingers in order to play a chord. Shaffer is certain that his guitar is a great leap forward for the normally tech-averse guitar industry; the Fretlight, he says, will transform guitar music, renewing young people's interest in the guitar, and teaching them to play with ease.

It's true that the guitar, like all musical instruments, faces a tough time finding new recruits. Industry figures indicate that the guitar is far less popular today than it was in the 1960s, which is no surprise. Kids today have so many other fun things to do -- the Wii, the Web, television -- it might never occur to them to pick up an ax. Schools are scrimping on music education. And then there's the music; you don't need a guitar to play much of the stuff now on the radio, a lot of which sounds closer to what comes out of a Mac than what comes out an amp.

But Fretlight is not likely to get kids flocking to the guitar. While Shaffer's invention is promising, it is not yet a painless way to learn to rock out. There is, meanwhile, another technology launching rock stars across the land, one that most guitar players don't even consider part of their world. I'm talking about "Guitar Hero," the ridiculously popular video game in which players use a plastic guitar-shaped controller to simulate rocking out.

Shaffer and others in the music business are dubious of the video game's effect on young people's musical abilities. In the past few weeks, though, I've interviewed several guitar teachers about the game, and some speak of it as the most revolutionary thing to hit the world of guitar since Jack White learned his first scale. "Guitar Hero" is introducing millions of young people to the possibility of playing the instrument, and it's also teaching them important skills they'll need to play. And not only that: "Guitar Hero," perhaps more than any other piece of modern entertainment, is juicing kids' interest in guitar-heavy music. What could be better for the guitar, after all, than hordes of young people learning to love "Smoke on the Water"?

Though "Guitar Hero" is meant to entertain and the Fretlight is meant to teach, they rest upon a shared insight -- when you pick up a guitar for the first time, you can't play a thing. A decade ago, back when I was still in thrall to Billy Corgan, I scrounged up $200 and bought a cheapo electric from my college town's guitar hotspot. I think I managed three lessons before I gave it up; the gulf between what I could do and what I wanted to do looked depressingly unbridgeable in any reasonable length of time.

Shaffer built his first Fretlight prototype in the early 1990s, but it was only later in the decade, after computers had invaded ordinary life, that the Fretlight could go mainstream. The latest models (which start at $399 for acoustics and $499 for electrics) are driven by software; they'll work with PCs or Macs, but a lot of the programs are PC only.

But the Fretlight is no miracle for the novice, know-nothing wannabe guitar hero like myself. I've been practicing on an acoustic Fretlight for about a month, and though it's probably easier than an ordinary guitar, I found learning from the guitar's text-based online teaching software very similar to the slow process of learning from a book.

The Fretlight is set to go on sale at Best Buy stores next year, and by that time the company will have replaced the textual tutorial with instructional videos; the frets will light up as the teacher tells you what to do. This would be an improvement, I'm sure.

But even videos would not address the worst part of learning to play an instrument: Practicing is dull. The Fretlight highlights where you're supposed to put your fingers, but unlike the "Guitar Hero" controller, it sends no feedback to the computer. As I played the Fretlight, I kept wishing that my computer could react, in some way, to what I was doing. I wanted it to tell me if was I holding down the correct strings, or if I was strumming in time, or if my guitar was correctly tuned. I kept wishing, that is, that I could turn my practice into some kind of interactive game, or that my PC could somehow pretty up the awful, tentative sounds I was producing with my instrument. I kept wishing for "Guitar Hero."

The magic of the video game is that it lets a novice sound like a pro. On "Guitar Hero," playing well is easy. Even if you suck and stick to Easy mode, you can ape a solo worthy of Jimmy Page. It "makes you feel like you're a guitar player without having to practice for years and years," says Ted Lange, an associate producer and in-house guitar expert at Red Octane, the company that makes "Guitar Hero."

The game's guitar has no strings; its fretboard features five colored buttons that you press with your left hand as you hit a plastic strumming bar with your right. You do this in time according to what's on the screen, winning points -- and playing a cool song -- for hitting the right notes at the right time, and losing points, and making bad music, when you mess up.

I discussed "Guitar Hero" with a half-dozen guitar teachers across the nation; all said they'd never played the game, but many had heard of it from their students. "Personally I've made hundreds or maybe even a couple thousand dollars on it, just because kids see the game and they want to go do the real thing," says Rob Caviness, who teaches at Backbeat Music, a studio he co-founded just outside of Denver. "I think a lot of kids listen to music and they don't know what it is -- the game lets you pick out one particular instrument and it says, 'Hey, this is what you can do with it.'"

Red Octane's Lange argues that "Guitar Hero" instills two important guitar-playing fundamentals: sensitivity to rhythm as well as mastery over "independent hand usage -- the fact that you have to do something different with each hand." There is perhaps no better proof of this effect than an 8-year-old boy in Denver named Ben Eberle, who is one of Caviness' guitar students, as well as one of the most well-known -- and undeniably amazing -- "Guitar Hero" players in the world.

Ben, who is in the fourth grade, is a YouTube kid. He's been playing "Guitar Hero" for a year and a half, and earlier this year, his dad, Lance, began posting videos of Ben's "Guitar Hero" sessions on the site. His nearly supernatural skills -- watch him hit every note of the My Chemical Romance song "Dead" while he's got his back to the TV -- have won him millions of viewers.

Ben says that he'd never thought about playing guitar before he picked up the video game. Now, he's deep into playing a real electric; he's taken five lessons so far, and he practices at least a half-hour every day after school. I asked Ben whether he thought "Guitar Hero" had made guitar easier for him. The game, he said, taught him how to "stretch out my fingers" to play the guitar. Caviness, his teacher, says the effect is much greater.

"He has a much better understanding of rhythm and his finger agility is more advanced than most other kids his level," Caviness says of Ben. Caviness has been teaching Ben the Black Sabbath song "Iron Man," a "Guitar Hero" standard, and "I think he's learning it two or three times faster than the pace of other kids. He can hear something and just nail rhythms for it."

Ben Eberle could, of course, be an exception; his skill at both the video game and a real instrument might well derive from natural music ability. Eberle's parents, too, have contributed to his success by making sure he doesn't slack in his practice.

Shaffer, the Fretlight inventor, argues that for most kids, "Guitar Hero" is something like a trick; when kids realize that they can't reproduce "Guitar Hero's" solos on a real guitar, they'll decide to stick with the video-game illusion of greatness rather than spend years becoming a real guitar god. Caviness notes that some of his video-game fans who've come to the class have dropped out. "They expect to jump into it and learn it as quickly as they learned the game, and they realize they can't," he says.

But Ben Eberle's example shows how the game can also ease every novice's painful sense of incompetence. When Ben gets bored with guitar because he can't play it was well as the video game, he switches back to the video game for a much-needed simulation of greatness. "Guitar Hero," that is, reminds him of his goal -- and lets him savor the feeling of being able to attain it.

There's something else the game has given Ben, too: a love of guitar rock. Before he played the game, Ben, like most kids his age, wasn't much into music. "One of the coolest things about it is that kids start jamming out to old classic rock like Boston, stuff that you would never hear them listen to otherwise," Lange says. (Lange is in charge of picking the game's music.) When new versions of "Guitar Hero" are released, the classic songs that are on the game often see a spike in iTunes sales, he notes.