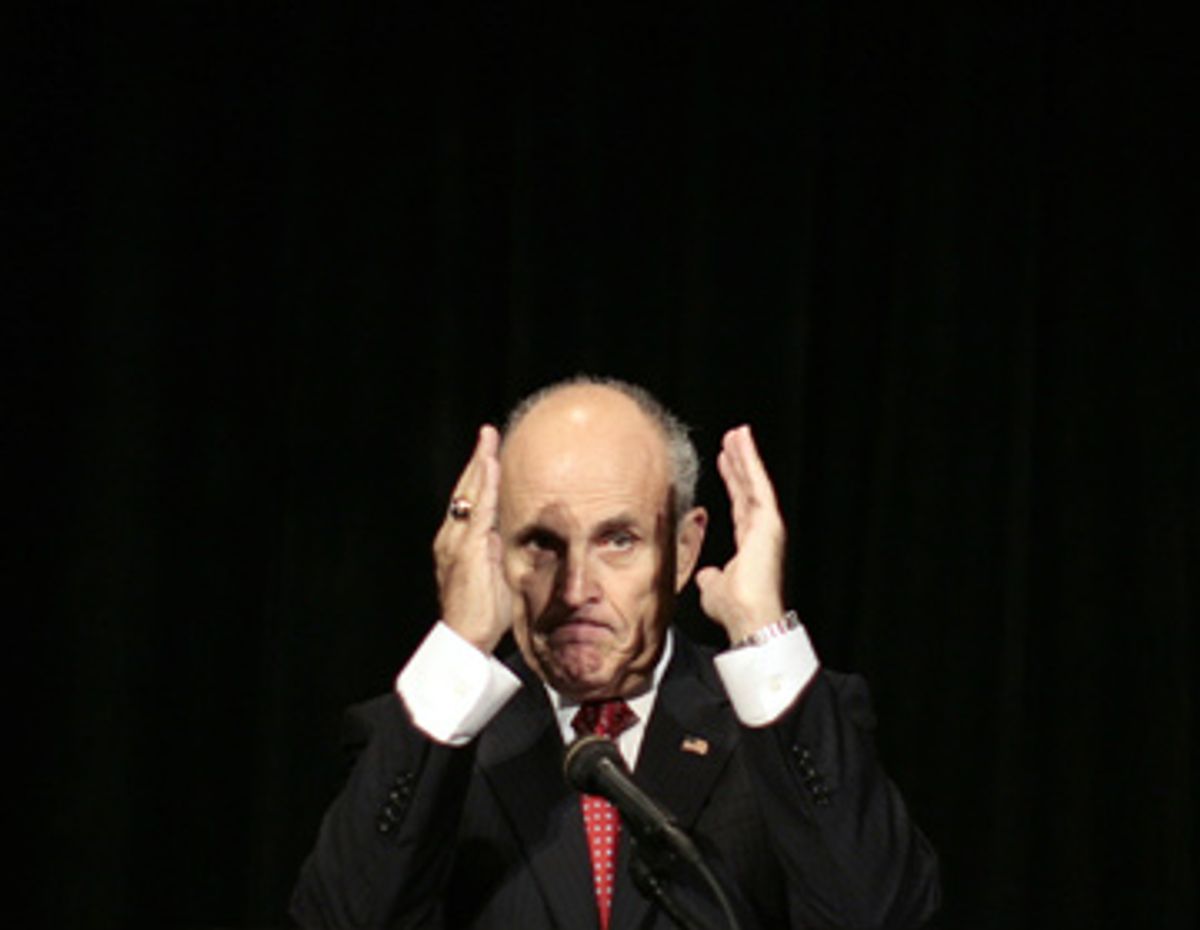 Further omens that Rudolph Giuliani aspires to be a worse president than George W. Bush were not long in arriving. First came a fawning profile in the New Yorker, which included assurances from neoconservative panjandrum Norman Podhoretz, who advises Giuliani on foreign policy, that his candidate can be relied upon to bomb Iran.

Then still more evidence arrived in the mail with the new issue of Foreign Affairs, the journal of the Council on Foreign Relations, which features a lengthy, pompous and ultimately very confused essay by the former New York mayor.

Giuliani's rhetoric -- which only succeeds in making Bush's oratory sound fresh by contrast -- is a warning in itself. The mind-dulling sentences published under his byline, each the dank spoor of Podhoretz, indicate a heavy proliferation of banal speech if he ever enters the White House.

Captive to his political opportunism and preoccupied with his jaw-jutting image, he simply cannot abide an original phrase, let alone an original thought.

Even more arresting than the moldy language in Giuliani's essay are the toxic policy suggestions. But its rapid barrage of cliché upon cliché is almost enough to conceal those neoconservative nuggets. A few samples, culled from nearly 6,000 words of the same cold-oatmeal consistency, show why digging them out was so onerous:

The United States must not rest until the al Qaeda network is destroyed and its leaders, from Osama bin Laden on down, are killed or captured ...

We must seek common ground without turning a blind eye to our differences with [China and Russia] ...

It is clear that we need to do a better job of explaining America's message and mission to the rest of the world, not by imposing our ideas on others but by appealing to their enlightened self-interest ...

America will win the war of ideas ...

We must learn from our past if we want to win the peace as well as the war ...

It is better to give people a hand up than a handout.

Most of what Giuliani says about "the international system" and the imperatives of American leadership will be familiar to anyone who has read a previous issue of Foreign Affairs or an Op-Ed by Henry Kissinger. But within all the blenderized mush, there can be found belligerent platitudes and hints of policy change that do not bode well.

Giuliani parrots all the usual conservative clichés about the war in Iraq and the baneful effects of withdrawal. Like Sen. John McCain, he draws a parallel to "lessons of the war in Vietnam," where he claims that the United States was on the cusp of victory when our troops began to come home in 1972. (Unlike McCain, however, he managed to avoid serving in Vietnam.) According to him, the decision to withdraw was disastrous for the world and U.S. interests, but "abandoning Iraq would have even worse consequences."

He doesn't seem to have noticed that the Socialist Republic of Vietnam is now an American trading partner -- and of course he doesn't mention that by the time we left Vietnam, more than 58,000 Americans had died there. The logical inference is that if only we were willing to sacrifice an additional 55,000 troops in Iraq, we would be able to triumph there too.

He takes an equally hard line on Iran, again resorting to the usual clichés when he urges that America should talk with the mullahs only "from a position of strength." He doesn't seem to comprehend that the occupation of Iraq, where our troops are propping up a Shiite government allied with Iran, has left us in a position of grave weakness in the region.

On Cuba and the Middle East, his enthusiastic pandering to the far right leads him into dangerous positions. When Fidel Castro dies, Giuliani apparently believes that the United States should "help the Cuban people reclaim their liberty and resist any step that allows a decrepit, corrupt regime from consolidating its power under Raúl Castro." Does this mean a military intervention -- another Bay of Pigs?

As for Israel and the Palestinian territories, he departs from one of the few redeeming aspects of Bush foreign policy to renounce U.S. support for Palestinian statehood. The Palestinians must earn a homeland by proving that they are good global citizens, according to Giuliani. Otherwise, the new state will simply encourage terrorism, he writes -- as if the statelessness and desperation of the Palestinians had not already bolstered terrorism throughout the region.

Although Giuliani blusters on at great length about American leadership and the importance of our alliances abroad, he doesn't understand how the policies he has endorsed will further diminish our prestige and undermine our remaining allies. He scarcely mentions AIDS and doesn't bother to discuss climate change, the issue that now drives policy around the world. This omission too reeks of pandering.

Reading Giuliani and imagining that he might somehow become president induces a profound sense of gloom. Fortunately, there is comic relief. At one of many points where he attempts to display his erudition and expertise, he notes the "cultural exchanges" that allegedly brought about the end of the Soviet empire. The example he cites is pianist Van Cliburn's concerts in Moscow, which "hastened change."

Van Cliburn played Moscow in 1958. The Soviet Union fell in 1989. If change were any hastier, the Berlin Wall would still be intact.