Sure, living through your teenage humiliations was bad, but laughing at them now feels so good. 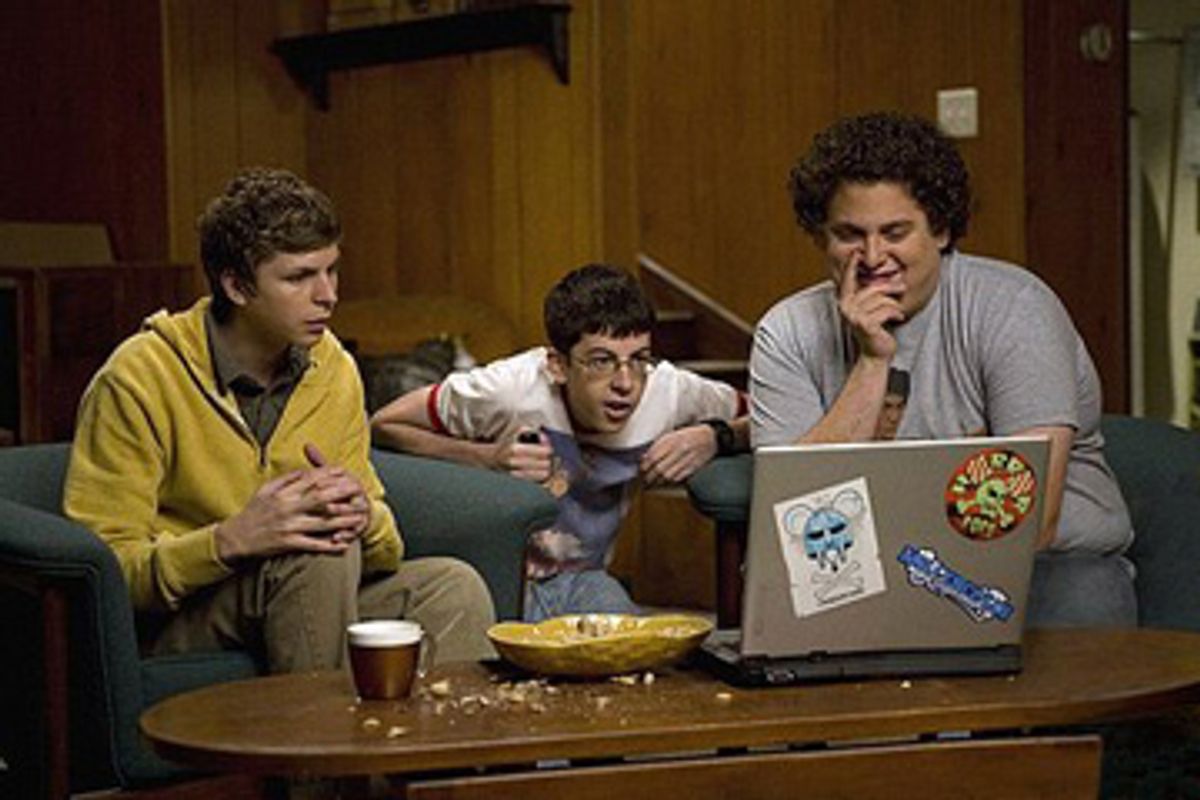 Let's say you've totally mastered the grown-up thing. You've got a good job, meaningful relationships with your loved ones, a nice place to live -- basically, you're king of your universe. If that description fits you -- or even if it doesn't -- then "Superbad," written by Seth Rogen and Evan Goldberg, directed by Greg Mottola, and produced by guy-of-the-moment Judd Apatow, is for you: because you're never too old, or too together, to relive the humiliation of your teenage years.

On some level, "Superbad" is a sweet story about friendship between teenage boys, specifically about the way our society's expectations of men -- of any age -- often prevent them from expressing their true feelings. Mostly, though, it's about teenage boys struggling to get laid, trying to buy alcohol with a fake ID, and, last but not least, riding the bus. And really, that's enough. Even though the movie's characters do learn some valuable lessons and are therefore redeemed -- at least partially -- there's nothing metaphorical about "Superbad." The movie doesn't need any superfluous redeeming qualities: Its pleasures and charms lie in its very crudeness, in the way the characters' thoughts begin in their dicks and spill out of their mouths, completely bypassing their brains.

"Superbad" is a shaggy-dog tale about three kids -- Seth, Evan and, the nerdiest and most hopeless of the three, Fogell, played by newcomer Christopher Mintz-Plasse -- hauling ass all over town as they attempt to buy liquor for a big party one of their classmates is throwing: They've been anointed with the task because Fogell has bragged about his ability to land a fake ID. When he shows it to his friends, their hearts sink: It's a Hawaii license with a rainbow splashed across it -- it looks like a toy license -- and the name beneath Fogell's half-awake, clearly underage visage reads "McLovin."

But the guys forge ahead, simply because they're desperate. The party is being thrown by Jules (Emma Stone), the grooviest minx in the school; Seth is dying to get into her pants. Evan has a crush on the flirty, curvy, adorable Becca (Martha MacIsaac), who'll be there, too: She's asked Evan if he'll get her some of the special vodka with the little gold flakes in it, and that bottle becomes his Holy Grail.

The misfits' odyssey involves several bus rides (Seth has a car, but it's been towed), numerous encounters with criminals and weirdos, and the benevolence (if you could call it that) of two reckless, immature cops, played by Rogen and Bill Hader (of "Saturday Night Live"). The cops, in fact, are the biggest problem with "Superbad." Their air of authoritative ineptitude is funny at first: They gabble at each other in Yoda voices and swing their superpowered police flashlights around like light sabers -- all in a day's work of serving and protecting. But they're not nearly as interesting, or as much fun, as the kids, and just when we think they've left the movie for good, they reappear for more excessive and unnecessary high jinks. Rogen, so wonderful in "Knocked Up," just seems to be gassing on here; the movie would be much better if his and Hader's roles were downplayed.

"Superbad" is best when it allows us to watch Seth, Evan and Fogell fall over themselves socially, and they do so over and over again. The picture captures the horror -- if you've been through it, I don't think you can ever forget it -- of being a teenager and having no clue whatsoever how to talk to someone of the opposite sex, even though, of course, everyone else seems to know exactly what to say. Seth may be a potty mouth, but it's clear that his aggressive sleaziness is just a cover for his numerous insecurities. Hill -- who also appeared as one of Rogen's buddies in "Knocked Up" -- plays Seth as a surly, horny, pudgy gnome; for most of the movie, he's extremely unlikable. But Hill has a great deal of control over this seemingly tossed-off performance: By the end of "Superbad," we may not exactly like Seth, but we sure know where he's coming from. Cera (perhaps best known from his role on "Arrested Development") plays Evan as a gangly sweetheart, the kind of kid you just know is going to make great boyfriend material. He's also an idealist: "Imagine if girls weren't weirded out by our boners and just really wanted to see them," he muses. "That's the world I want to live in."

But Mintz-Plasse, in his first acting role, steals the movie. His Fogell is one of those scrawny lads who's all shoulder blades and no shoulders, and his idea of party wear is an ill-fitting corduroy vest. ("I'm trying to look older!" he protests as the others make him take it off.) When he opens his mouth, an adenoidal squeak comes out. Seth is cruel to him, partly out of jealousy: Evan and Fogell will be going off to Dartmouth together next year; Seth didn't get in. But Fogell survives the taunting, the cruelty, even his own ineptitude. In his mind, if not his body, he's Dean Martin, and believe it, someday he will get the girl. Fogell, in his gaping corduroy vest, is proof that sophistication, confidence, erotic appeal are all just states of mind. He's so bad he's good.