Giuliani said he spent as much time at ground zero as many rescue workers. Where was he really? Much of the time, at baseball games. 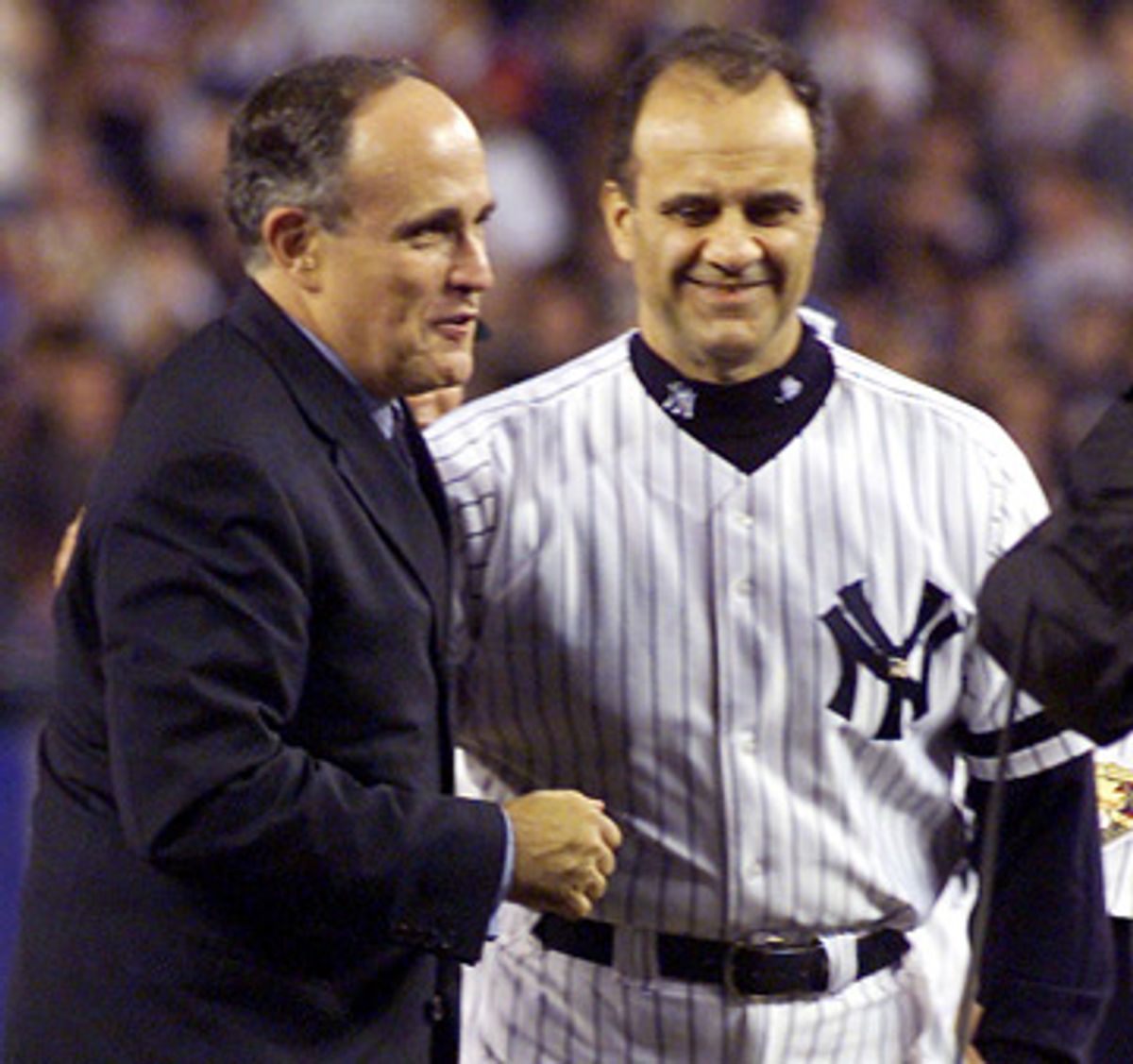 On Friday, a New York Times story examined Rudy Giuliani's schedule in the months after 9/11 to verify his controversial claim that, like rescue workers, he'd spent long hours at ground zero, and so was "in that sense ... one of them." In fact, the Times found, he only spent 29 hours at the terror site between Sept. 17 and Dec. 16.

The results were, considering the mayor's long-standing devotion to the Bronx Bombers, unsurprising. By our count, Giuliani spent about 58 hours at Yankees games or flying to them in the 40 days between Sept. 25 and Nov. 4, roughly twice as long as he spent at ground zero in the 90 days between Sept. 17 and Dec. 16. By his own standard, Giuliani was one of the Yankees more than he was one of the rescue workers.

During three postseason playoff series that began Oct. 10, 2001, and ended Nov. 4, 2001, Giuliani attended every one of the team's home games, with the possible exception of the third game of the American League Championship Series, for which Salon could not confirm his attendance. According to Salon's arithmetic, Giuliani spent about 33 hours in stadiums -- this includes two World Series games he watched in Phoenix -- during the Yankees' 2001 postseason run, four hours more than he spent at ground zero. (We do not know if he stayed for every pitch, but famed baseball writer Roger Angell described Giuliani in the the New Yorker as a "devout Yankee fan, a guy who stays on until the end of the game.")

Giuliani also attended the first regular season game the Yankees played in New York after the attacks; that game lasted almost three hours. (We do not know if he was present for any of the Yankees' other seven post-9/11 home games.) And he spent one of the away World Series games in a specially reserved box with his son at the ESPN Zone in Times Square, London's Daily Mail reported. The Daily Mail said he did that, in fact, for every away game of the American League Championship Series and the Yankees' first-round Division Series against the Oakland A's, but Salon could not independently verify that report. (Giuliani watched the first game of the World Series from his City Hall office.)

Then there's the whirlwind tour Giuliani made traveling back and forth to Arizona for games six and seven of the World Series. Granted, he and his now-estranged children were traveling with a small entourage composed of the families of some of 9/11's victims; Major League Baseball had chipped in free tickets, Continental Airlines had donated a charter jet, and hotel rooms were comped as well. Still, once those families were in Arizona, Giuliani -- who had been predicting that game six would bring a Yankees victory and an end to the series -- made an extraordinary effort to ensure that he could attend to his responsibilities in New York and still make it back for game seven.

Giuliani left game six midway through, the Associated Press reported at the time, so that he could make his 12:30 a.m. flight back to New York, where he needed to spend some time discussing the U.S. anthrax attacks, which by then had touched New York's City Hall. The mayor was in Staten Island by 9:30 a.m. to kick off the New York City Marathon. Then it was back to the airport a few hours later, and on to Arizona for game seven. That, in total, meant 22 hours in the air.

But Giuliani's involvement with the team went far beyond a time commitment. He was, in fact, a visible, constant presence at the postseason games and, more than once, a participant in the team's victory celebrations. Dave Johnson, executive sports editor of the Evansville Courier & Press, even wrote a column at the time bemoaning Giuliani's omnipresence and saying, "If I didn't already dislike the New York Yankees, I'd root against them just because of Rudolph Giuliani ... Who anointed Rudy baseball's new Super Fan?" The mayor was pulled on the field after the Yankees clinched both the American League Division Series and Championship Series, and spent time in the clubhouse after those victories as well.

Nor did Giuliani's involvement start as some attempt to boost the city's spirits after the tragedy it experienced. As the Village Voice's Wayne Barrett has previously reported, Giuliani has four Yankees World Series rings from the time he was mayor; by contrast, Barrett reported, no mayor in any other city that's won a championship since 1995 has any Series ring at all. Barrett also reported that Giuliani attended at least 20 of the Yankees regular season games each year he was mayor.

Giuliani also found time during the period studied by the Times to, for example, make a call to slugger Jason Giambi exhorting him to leave the A's and sign with the Yankees. Giambi did, on Dec. 13. A day later, Giuliani introduced Giambi at City Hall, where, according to the Associated Press, Giambi said, "[Giuliani] was going to help me find somewhere to live, so I'm going to take him up on it."

And though the final budget he submitted as mayor called for serious belt-tightening around the city -- cuts as high as 15 percent for most agencies -- in the wake of the attacks and the $40 billion debt New York faced, Giuliani wasn't quite prepared to subject the Yankees or their counterpart Mets to the same penny-pinching. In fact, though nearly everyone expected 9/11 to cause the city to abandon the plans for new stadiums for the teams -- Long Island's Newsday reported that "since Sept. 11, several city officials, including [then-Mayor-elect Michael] Bloomberg, have said the projects were on the back burner because of the city's other pressing needs" -- Giuliani wanted to push forward. The stadiums were projected to have cost $1.6 billion in city, state and private funds.

Giuliani did need a place to play, after all. Though rumors were swirling at the time about what his future held after the end of his final term as mayor, Giuliani was generally unwilling to give specifics. He was willing, however, to jokingly suggest one possibility -- "right field for the Yankees," the Associated Press quoted him as saying while swinging an imaginary bat.

A spokeswoman for Giuliani did not return a voice-mail message left seeking comment.