Trying to find the hottest reporter in the nation's capital is like trying to elect a president in Ukraine. Don't expect fairness. 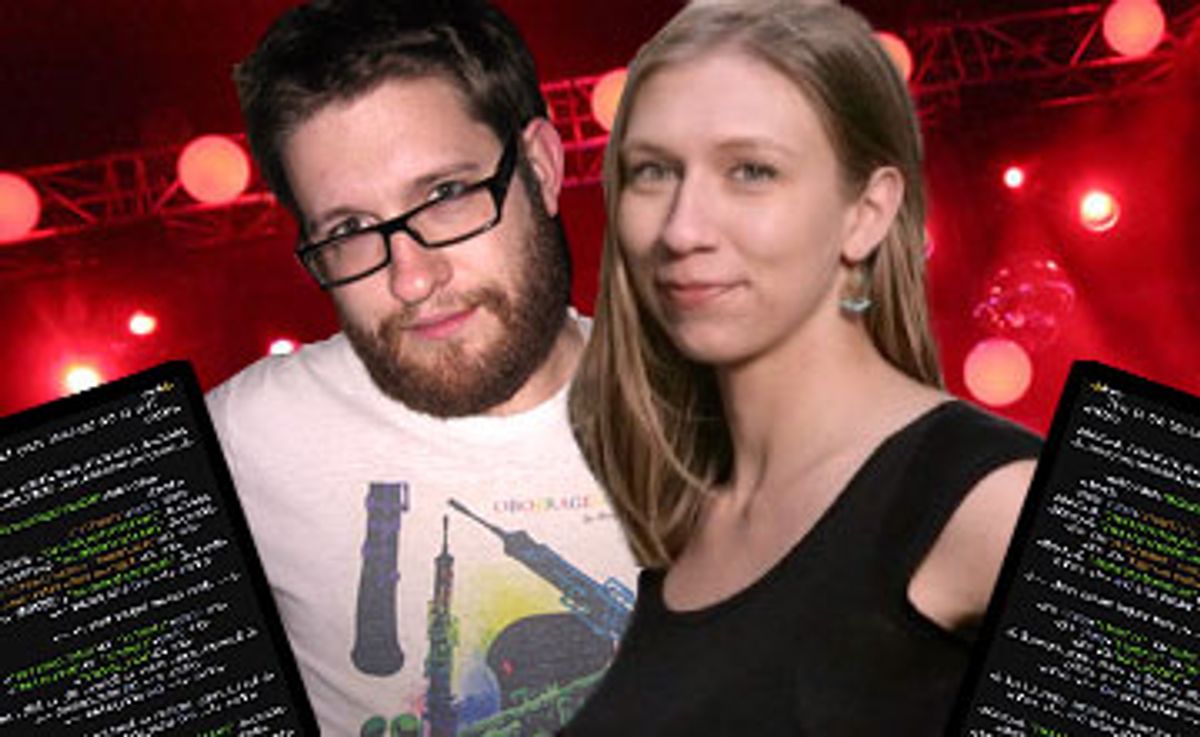 Kriston Capps, a young arts writer in Washington, is a handsome fellow, that much is undeniable. And of Capps' housemate and friend Catherine Andrews, an editor at the Washingtonian magazine's Web site, it would not be too much to note, as many bloggers recently did, that she is just plain hot. The question before us, however, is not whether Capps and Andrews make you tingle; they do, and for that we ought be thankful. But are these two truly the hottest in Washington journalism?

On July 30, Fishbowl DC, a popular local-media blog, proclaimed this to be the case. Andrews had won more than 37,000 votes in a weeklong online hotness poll, beating out 22 women from the biggest bureaus in town. Capps garnered even more votes in the men's "off-air" category; 120,000 people thought he was smoking, and I don't mean Marlboros.

But the contest was not on the up-and-up. Fishbowl's poll often functions less as an assessment of a nominee's hotness -- whatever that might mean -- than of online organizing prowess, and this year, it was even less than that. Capps and Andrews acknowledge that they won only because their online friends -- without their express encouragement, they both say -- built software "bots" that voted thousands of times for each of them. The bots were distributed on Unfogged, a humorously wonky blog and discussion site popular with D.C. types, within a day of the poll's opening. If you downloaded and ran the software, your machine began tallying up votes for Capps and Andrews faster than a Diebold rigged for George W. Bush.

Fishbowl's Hottest Media Types contest, which is now in its third year, is one of a couple of beauty contests that has recently installed itself as an institution in the capital's slow, muggy summer. The Hill newspaper's annual list of Capitol Hill's 50 Most Beautiful People bursts with tumescent glee unseen since Penthouse's salad days ("Women of all ages and political persuasions swoon when Rep. Brad Ellsworth [D-Ind.] comes near.") Silly, funny and so inside baseball you can taste the cork, Fishbowl's contest prompts the city's young reporters and public relations folk to engage in the sort of naked self-promotion better suited to their bosses and journalistic subjects -- and which, in some cases, they'll surely come to regret.

What's surprising is not that anyone cheated -- online polls are about as trustworthy as Soviet Bloc elections -- but how brazen, and how easy, the cheating was. It's possible to read too much into the breezy contest -- perhaps it's going too far to suggest, as one of the contestants did, that the poll functions as a perfect metaphor for Washington life, in that everyone knew that the only way to get ahead was to play outside the rules. Still, the manner in which people went about pushing themselves is telling. These were media people in Washington; it was probably too much to expect that they wouldn't rig the contest.

Though a few candidates did nothing to try to win (and, consequently, lost), many campaigned for the title. Most of the bloggers at least noted their nominations on their sites (often with necessary dollops of self-deprecation). Some nominees took it further. Jonathan Shrader, the Department of Energy spokesman who won a landslide victory in the male P.R. category, was helped by an ad on Craigslist. ABC News' Jake Tapper put out a brilliant e-mail pitch asking people to ignore his nomination and to, instead, donate money to a nonprofit child mentoring organization -- the unstated message, of course, being that kindness is hot (he lost to the liberal commentator Bill Press, whose GOTV tactics have come into question).

No one seems to have taken the contest more seriously than Philippe Reines, Hillary Clinton's press secretary, who sent out several missives exhorting his friends to vote -- notes so pathetic that both the New York Times and CNN took pity on him.

Kriston Capps and Catherine Andrews might have won in such traditional ways. The two are relentlessly bloggy; in addition to writing for online publications, each runs a blog -- here's Capps', and here's Andrews' -- and together they also do an occasional video "vlog." The two also live with several bloggers (whom Capps points out are not remotely as hot as them) -- Matthew Yglesias, who now blogs at the Atlantic, and TPM Muckraker's Spencer Ackerman are a couple of their housemates, as is a woman who goes by the pseudonym Becks, a contributor to Unfogged.

I've never met Capps or Andrews, though they come off, in their videos, blogs and photographs -- they are the sort of young people who document much of their lives online -- as quite likable. And I don't only mean they have nice personalities. Capps has been known to sport an unshaven, hipster look; as one of the people who convinced Fishbowl to nominate him noted, "He's not bearded anymore but I don't know anyone else who can pull that look off without looking like a total douche. He wears it well." Andrews is classically pretty, with round cheeks and a cute smile, and a nose, as a reader of Yglesias' blog noted, that simply seals the deal as to her hotness.

Their connections gave the pair an early leg-up. Shortly after the poll opened, Ogged, the pseudonymous fellow who founded Unfogged, put up a note telling his readers to vote for Andrews. ("Not a chance," Ogged replied when I asked his real name.) He suggested that readers vote manually, multiple times -- which Ogged says he thought was OK, because no one had said that wasn't allowed.

He's right; there was no such rule. Indeed, there weren't any rules at all. Patrick Gavin, the editor of Fishbowl DC, told me that the polling software the site was using was quite primitive, unable to prevent people from rigging the totals. Gavin pointed this out on several posts on Fishbowl and tried to shame people into behaving well, though to little avail; in the end, he says, he thinks that the vulnerabilities in his software led to a strange kind of democracy in the vote -- everyone, he notes, was equally capable of cheating.

Results of the voting were posted live on Fishbowl, and several hours after the polls opened, readers of Unfogged who were glued to their computers noticed that a couple of Andrews' opponents were seeing enormous gains in their totals. Votes for Garance Franke-Ruta, a political writer at the American Prospect, "started to skyrocket," and soon after so did those for the Associated Press reporter Nedra Pickler. These candidates, Ogged and his fans concluded, must be running bots of their own, so they "decided to write our own to combat them ... might as well try to win, and to put Kriston over the top while we were at it," Ogged told me in an e-mail.

It is unclear who engineered the pro-Pickler and Franke-Ruta bots, if they truly were bots. Nedra Pickler denies any interest in the contest. "Not only did I not campaign for it, I was hoping others wouldn't see it because they would certainly wonder what I was doing there with a bunch of women who are so much more attractive," Pickler said in an e-mail. Other than mentioning the poll once on her blog, Franke-Ruta also did not campaign for the hotness title, and says she didn't do a bot either. "My two theories are that the 'garancebot' was created by either a) a fan or b) someone in the Unfogged reader community -- possibly even a friend of Catherine's -- who was doing it to tweak Catherine since she wanted to win so bad," Franke-Ruta told me in an e-mail.

Andrews, for her part, says she finds the situation funny. "I mean, this contest is completely ridiculous, and in previous years many of the winners had won by bots," she wrote in an e-mail. "I did stop paying attention after a while, and then I checked back in a few days later and was like, oh god, I have something like four million votes or some excessive number. So it started to feel a little silly then, but not too much." In a video, she thanked all of her geeky helpers.

When I asked Kriston Capps whether he thought his win was "fair," he acknowledged it wasn't. But he pointed out, "Robots have always had a thing for me."

Correction: I originally identified Spencer Ackerman as a writer for the New Republic; that was true once, but not anymore.