Whales play a romantic role in our national mythology, but they also helped transform a young colony into a world power. 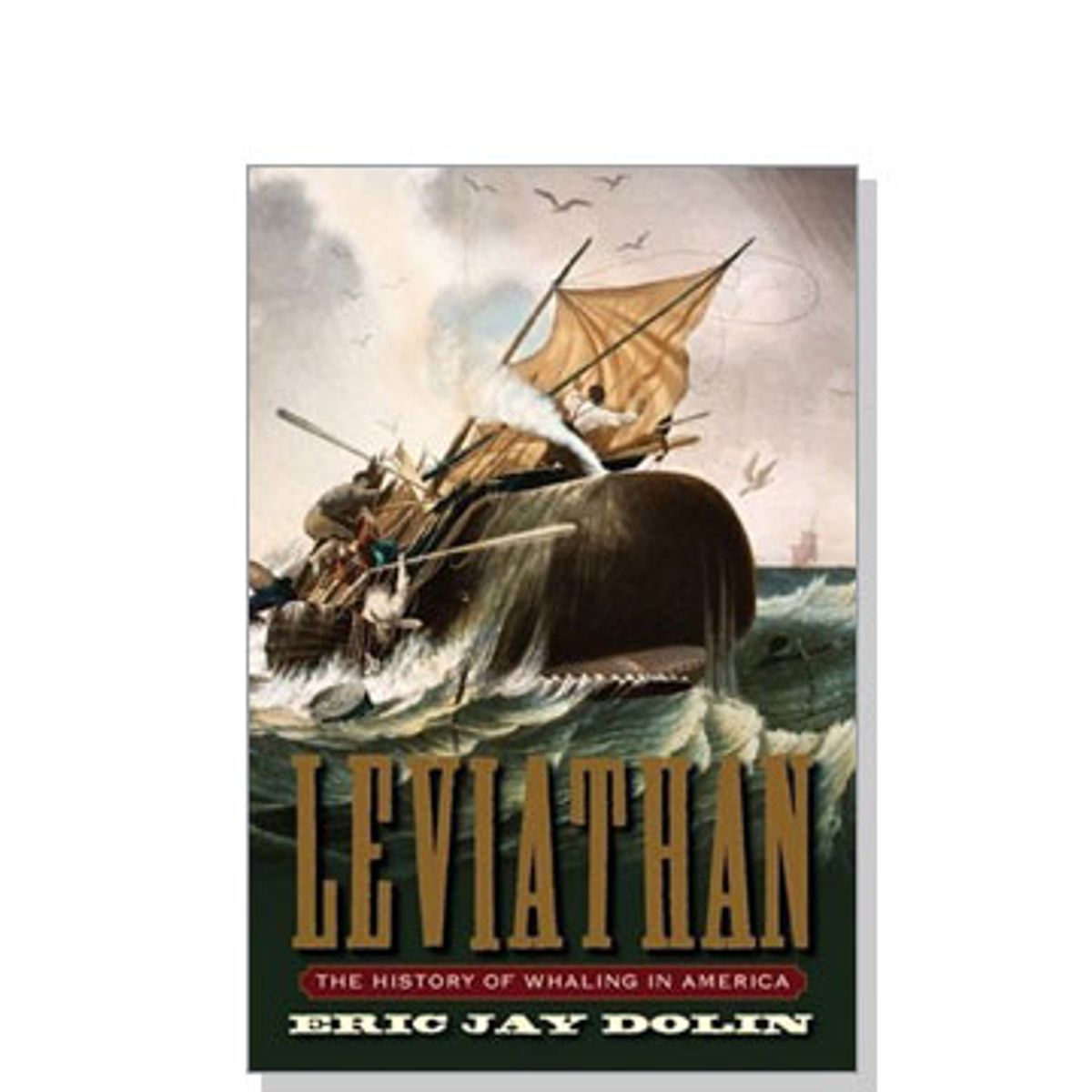 D.H. Lawrence famously called "Moby-Dick" "one of the strangest and most wonderful books in the world," and while plenty of readers might agree with only one or the other of those descriptors, there's no questioning the book's pride of place in America's literary imagination. Vast, unruly, shot through with poetry ("untottering Ahab stood forth in the clearness of the morn; lifting his splintered helmet of a brow to the fair girl's forehead of heaven"), "Moby-Dick" remains, more than 150 years after its publication, the most astonishing, mysterious, single-volume feat in our national letters.

Small wonder, then, that Herman Melville, his masterpiece and his ornery white whale surface repeatedly in "Leviathan: The History of Whaling in America"; in fact, all three seem to companionably inform nearly every page of Eric Jay Dolin's captivating, though weirdly uneven, chronicle of the United States' long, profitable and deadly relationship with whales, from the mid-17th to early 20th centuries.

Now, we're dealing with whales, whalers and a bit of American Gothic and American mythic, here, so let's get something out of the way at the start: Despite the rip-roaring imagery adorning the book's cover -- a justifiably pissed-off beast rising from the depths, smashing a whaleboat, scattering the boat's occupants like matchsticks -- Dolin's story is (thankfully) more than a tale of hardy men going down to the sea in ships, chasing and harpooning anything that moves.

To be sure, there are scenes of wholesale, seaborne slaughter, certain to gratify those who like their history served extra bloody. Mutinies, madness, ships' decks awash in viscera, sweat and blubber -- whaling's innate brutality is on frequent and graphic display. But what ultimately distinguishes "Leviathan" is Dolin's ability to show that, for generations, whaling was far less the romantic adventure of popular imagining (both past and present) than a purely, unapologetically economic engine helping to drive a young country from ambitious, increasingly aggrieved colony to world power.

Aside from a few fun, impractical facts retained from biology or social studies classes, most Americans understandably know little and care less about whaling beyond a vague familiarity with antiwhaling groups like Greenpeace, of course, and the more aggressively confrontational Sea Shepherd.

It was not always so. For a significant part of America's history, open-ocean, wooden-vessel whaling was vital to the national economy and, for many years, as much an element of the young nation's identity as, say, the auto industry was in the latter half of the 20th century. Dolin brings that vanished, watery world back to life, and if he sometimes falls short of his aim -- namely, telling the full, unadorned story of American whaling's extraordinary, largely forgotten rise and fall -- it's not for lack of trying.

The story begins -- or at least really gets going -- off the coast of North America, and like so much of whaling's history, it's rife with contradictions. Marveling at the rapid ascendance of a small, hardscrabble, sparsely populated island called Nantucket in the early 18th century, Dolin neatly points up the incongruity of the island's deeply religious inhabitants embracing the violent rigors of whaling at the same time that he celebrates their success:


Quakerism [was], by mid-century, the predominant religion on Nantucket ... The "fighting Quakers" or "Quakers with a vengeance," as Melville called them, had a strong work ethic and a business sense that proved most efficacious in this emerging industry ... [But] it is a bit strange that this religion, rooted so firmly in pacifism, should have been so instrumental in catapulting Nantucket to the front rank of colonial whaling communities. After all, whaling, at its most elemental, is a brutal, violent, and deadly activity, and one that a pacifist might just as soon avoid.

Dolin has a tendency to sometimes strain for a punch line or to belabor the obvious (peace-loving Quakers butchering the noble creatures of the ocean = paradox; we get it!), and few readers will come away praising his prose for prose's sake. But over the course of 375 pages, plus an additional 80 of notes, he manages to mix the historical with the immediate and particular in such a way that we occasionally feel as if we're enjoying a tale that seems to veer from the verifiable past into the realm of sci-fi.

Consider the sperm whale, "the whale's whale," as one chapter heading in "Leviathan" has it. If these animals didn't exist, it's unlikely that any fantasy novelist's imagination could invent them. When most people think of whales, they probably picture the sperm. Moby-Dick was, of course, a sperm. Most depictions of 18th and 19th century whaling feature sperm whales. As Thomas Jefferson noted, the sperm whale "is an active, fierce animal and requires vast address and boldness in the fisherman."

Males, or bulls, can reach 60 feet long and weigh 50 tons. Their brains, weighing up to 20 pounds, are the largest of any species. They can dive thousands of feet beneath the waves and remain submerged for up to an hour. The sperm whale's skin is 14 inches thick -- the thickest of any animal. Part of their diet is made up of giant squid -- equally freaky, awe-inspiring creatures that can grow to 60 feet long and weigh 1 ton, and that leave nasty, saucer-shaped scars on their adversaries' heads during life-and-death battles in the frigid, lightless, silent depths of the open ocean.

When hunted, these enormous, unpredictable, almost immeasurably strong beasts were in their element; it's the puny predators -- the whalers -- who were, quite literally, at sea. So what compelled men to pile into light, fast wooden boats at the first sight of a whale's spout on the horizon, row like mad through heaving waves, in all weather, and often into the teeth of icy winds, and try to hook into one of these behemoths with a hand-thrown harpoon and a few thousand feet of rope?

"When whalemen looked at sperm whales," Dolin writes, "they mainly saw three things that could make them money -- blubber, spermaceti, and ambergris." The blubber of a sperm whale, when boiled and rendered, produced an oil that burned cleaner than that of any other whale, while the mysterious spermaceti -- scientists are still not entirely sure, to this day, exactly what the tons of milky substance contained in the sperm whale's head is actually for -- was fashioned into the finest, brightest, most expensive candles of the era.

Ambergris, meanwhile, is one of those natural wonders that make one feel that perhaps God has a sense of humor, after all. It is, Dolin tells us, "a gray or black waxy substance that is formed in the stomach or large intestine of sperm whales, and is often expelled during defecation, sometimes as small lumps the size of baseballs, and other times as large concretions weighing hundreds of pounds ... For more than a thousand years ambergris has been a rare and exceedingly sought-after item of commerce, making it, at times, literally worth its weight in gold. Egyptians burned it as incense in their temples, and the Chinese thought it a powerful aphrodisiac. King Charles II of England favored ambergris and eggs over any other dish."

As remarkable as the characteristics of sperm and other whales (the right, the bowhead, the minke) are, however, it's the hunting and processing and selling of their resources by American whalers -- and the cultural and political vagaries of the whaling era at its height, from the mid-18th to mid-19th centuries -- that obviously float Dolin's boat, and the man delves into the intricacies with an enthusiasm that enlivens the mustiest of history lessons.

Where in our schooling did any of us learn that Nantucket's whalers attempted, in essence, to make a separate peace with their hugely important trading partners, the British, prior to the Revolutionary War, enraging the Colonies and nearly driving a dangerous wedge into the already shaky rebellion? Who knew that much of the debate in the English Parliament prior to the war between those who favored harsh measures against the colonists and those who favored a more reasoned approach to taxation and tariffs centered on fisheries and, specifically, on America's incredibly profitable whaling ventures?

Dolin somehow manages to make the idea of a 25,000-word speech in Parliament by Edmund Burke as relevant to the story of American whaling as the harpooning of an 80-barrel bull off the coast of Fiji -- just one sign of the man's love of his topic, and of his skill at breathing life into seemingly impenetrably dull and only tenuously connected events.

Another of Dolin's strengths throughout is his finely tuned mix of admiration for the cleverness and mettle of whalers -- their increasingly efficient means of, to put it bluntly, finding and killing their quarry -- and his frequent acknowledgment of that efficiency's awful toll. In fact, the main reason that the American whalers began sailing farther and farther away from the original North Atlantic hunting grounds was that the whales were vanishing.

"The comparatively total disappearance of the whale in the Atlantic is an unquestionable fact," naturalist Edward Augustus Kendall wrote in the early 1800s. One can hardly read those words today and not hear the modern commercial fisherman's lament about the collapse of fish stocks the world over. Dolin doesn't hammer us with an environmentalist's dire warnings about how utterly destructive seemingly commonplace human endeavors can be. He doesn't have to; the implication is enough.

Dolin does occasionally founder, however -- most noticeably when he inexplicably chooses to focus (or not focus, as the case may be) on a particular theme or episode. For instance, the chapter titled "Stories, Songs, Sex, and Scrimshaw" lasts a measly six, not-very-sexy pages. Surely ships filled with men sailing thousands of miles away from home, through utterly foreign waters, for sometimes years at a time, could generate more stories, songs, sex and scrimshaw than that. A rather meandering account of a mid-19th century mutiny, on the other hand, goes on (and on) for 15 pages, until President Ulysses S. Grant finally pardons the ringleader, 15 long years after his trial. Mutinies are often terrible, bloody affairs, filled with enough drama, heroes and villains to sustain entire book-length accounts. Unfortunately, Dolin's treatment of this particular mutiny -- the only one "Leviathan" considers at length -- is neither riveting nor terribly revealing. It's assiduously researched, and carefully reconstructed, and the entire affair nevertheless just kind of peters out.

"Leviathan" succeeds, though, because its author cares, and he makes us care, not only how war and commerce and fashion and politics and the hunting of great whales were linked to one another during America's early years but how those links (and, equally, their gradual, inevitable sundering) still echo, sometimes faintly, sometimes resoundingly, today. Dolin's book, filled with killing and death, bravery and ingenuity, greed and hubris, brings a murky, myth-shrouded past to vivid, messy life.