Freedom's Watch, the former press secretary's new pro-Iraq war group, has little to do with veterans and everything to do with politics. 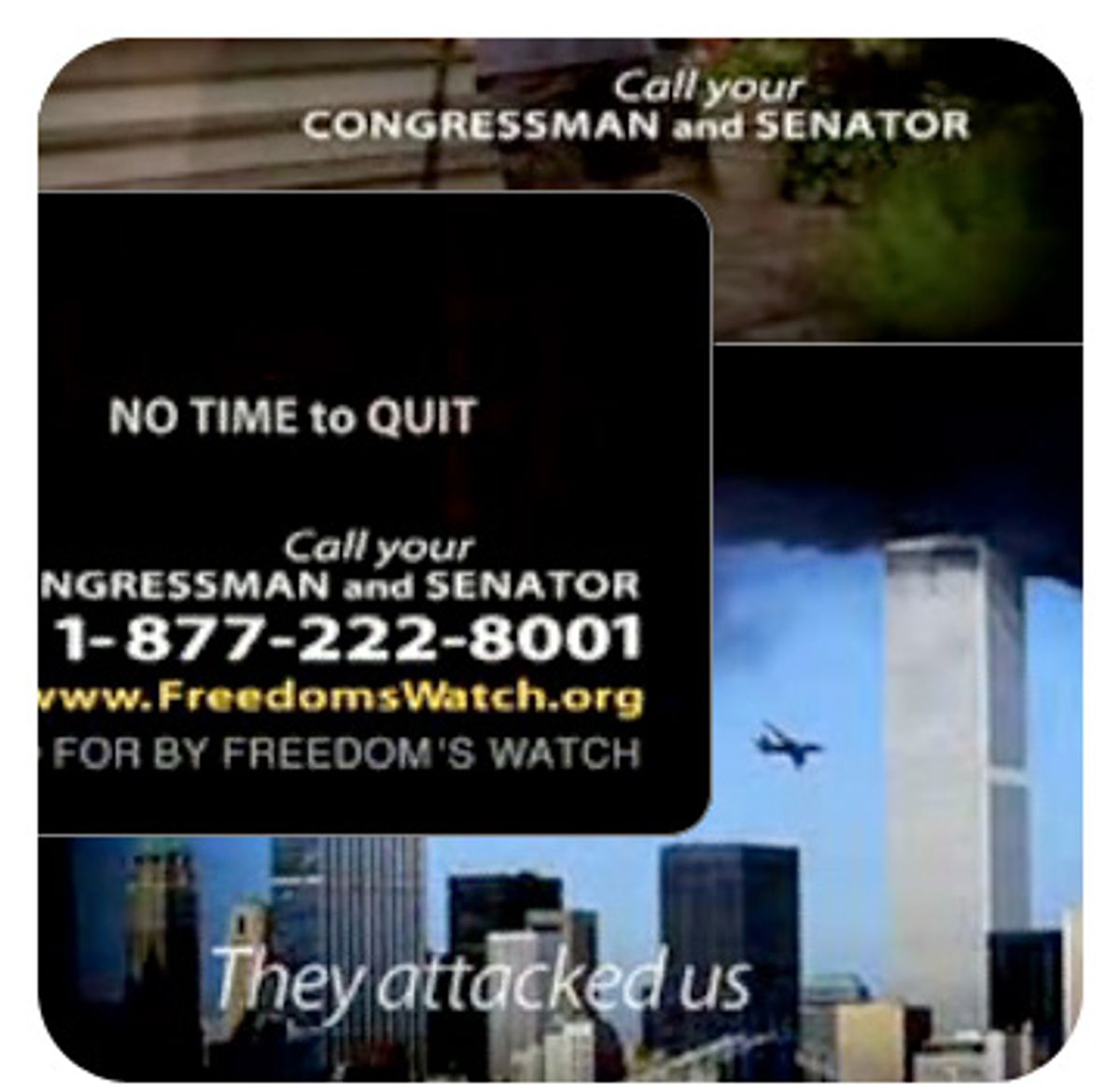 If you happen to reside in the district of a Republican member of Congress whose support of the Iraq war is wavering, or in a state where a Republican senator is facing reelection next year, you may soon see a moving commercial. Featuring the voice and image of a veteran who lost both legs in Iraq, it delivers a familiar message: "They attacked us before" -- on 9/11 -- "and they will attack us again" if we don't fight on until "victory."

Nobody would want to argue with John Kriesel, the veteran who appears in this ad and whose sacrifices are all too obvious. When he gazes out from the screen to admonish us that "it's no time for politics," he is surely sincere. So are the other veterans and family members of deceased vets who are appearing in similar ads urging Congress to stay the course (although that phrase is no longer operative). They too tell us, no doubt believing every word, that we are winning the war, that we invaded Iraq to fight the terrorists who attacked us on 9/11, and that to withdraw now would dishonor those who have been killed and wounded there -- and they insist that anyone who disagrees is motivated by "politics." But the same degree of misguided sincerity should not necessarily be attributed to Freedom's Watch, the new right-wing organization financing those ads.

Unlike VoteVets.org, the organization founded by Iraq and Afghanistan veterans that has emerged as one of the most effective critics of the war, Freedom's Watch uses killed and wounded veterans and their families in its advertising, but is not operated or supported by actual veterans. Instead, the founders of Freedom's Watch include notable Republican fundraisers such as Melvin Sembler, the shopping mall magnate whose rewards have included ambassadorial posts in Australia and most recently in Italy; Anthony Gioia, a Buffalo, N.Y., macaroni manufacturer who served as ambassador to Malta; Howard Leach, a wealthy California grocery distributor who served as ambassador to France; and Sheldon Adelson, the casino billionaire who is among the richest men in the world. The supporters listed in Freedom's Watch's first press release also include at least eight more major Republican donors.

But all those generous gentlemen are probably just providing the money for the national advertising rollout. The brains behind this operation are former White House press secretary Ari Fleischer, who spent many hours on the press podium repeating the same misleading messages now promoted by Freedom's Watch, and Brad Blakeman, a former White House and campaign scheduling director for President Bush who frequently appears on cable TV to advocate administration policy as a "Republican strategist." Executing their strategy are the sharp public relations consultants at Jamestown Associates, a nationally known Republican firm whose clients have included dozens of GOP officeholders, a variety of conservative organizations and fronts, and the U.S. Chamber of Commerce.

With people like these in charge, the Freedom's Watch advertising campaign -- expected to cost as much as $15 million in its first phase -- obviously has nothing to do with "politics."

Or else they have everything to do with politics, namely to bolster the embattled base of support for Bush and intimidate Republicans who might defect during the next phase of the congressional struggle over the war. According to the Politico's Mike Allen, who boasts an extensive network of White House and GOP sources, the ultimate goal of Freedom's Watch is to "do for the GOP what the MoveOn political action organizations have done for Democrats." Blakeman hopes that Freedom's Watch will become "a never-ending campaign -- a stable, credible voice of reason on generational issues that won't rise and fall with election cycles." Such wishful descriptions would make sense only if MoveOn.org were a front group bankrolled by billionaires and controlled by party operatives and politicians' mouthpieces, rather than a grass-roots citizens organization that relies upon the donations and activism of millions of Americans.

So while Freedom's Watch may prefer to present itself as a voice of veterans and to imagine itself as an expression of grass-roots voters, it more closely resembles United Seniors Association or Americans for Job Security. Like those other front groups, Freedom's Watch has a big budget, a partisan agenda and a roster of right-wing talent to wield temporary influence, whether during an election campaign or a policy struggle, while making little or no real effort to organize citizens outside the Beltway. It isn't surprising that the White House would resort to a blitz of this kind, because they have often worked so well in the past.

But the manipulative style of the Freedom's Watch ads -- and the apparent decision to air them against wavering Republicans -- signals desperation, not strength. This campaign is aimed at the base, not the broader public that despises Bush and wants the troops brought home. Launching such an effort now may hold a few votes for the White House in the upcoming congressional struggles over the war, but it is cheapening the emotional currency that Republican strategists have relied on during the past three election cycles and will undoubtedly seek to exploit again next year.

Such strategies eventually exhaust the public, and what helps now may be ruinous later. Perhaps there is poetic justice in Republicans turning on one another with the same cynical lies and manipulations that led to the war in the first place.