A writer sifts through the wreckage of her schizophrenic sister's short life. Can she penetrate the helter-skelter chaos to understand what was going on in her mind? 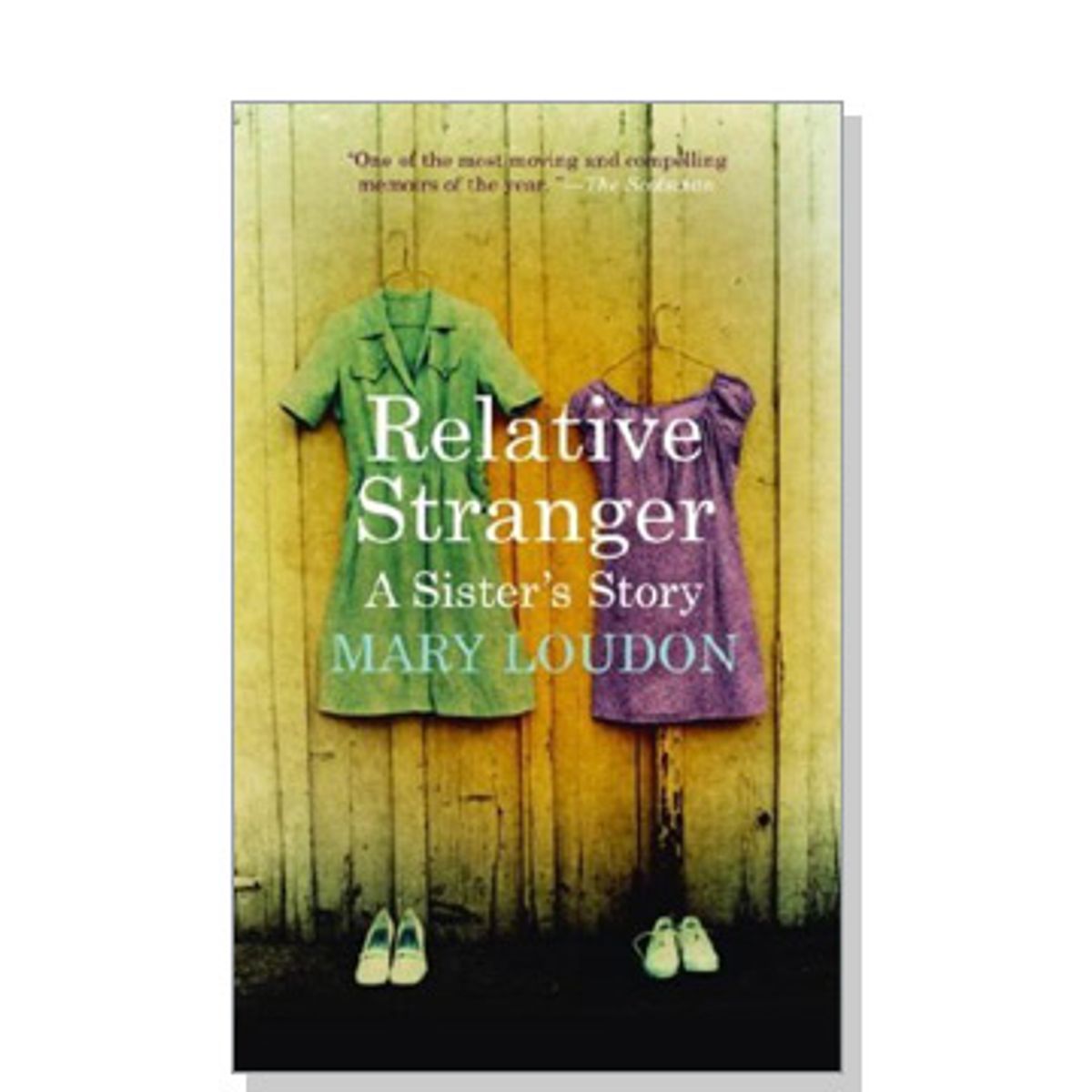 "Trying to see a person through the fog of serious mental illness is a little bit like trying to make sense of someone speaking to you in a language of which you have only a basic grasp," Mary Loudon writes of her relationship to her schizophrenic sister, Catherine. "You do a lot of filling in."

Schizophrenia has a vast stable of symptoms, among them asociality -- an avoidance of the company of others. For Catherine Loudon, this meant an inability to maintain relationships that demanded anything of her at all. Having suffered a serious breakdown during a stay in India in her early 20s, Catherine had more or less estranged herself from her family by the time of her death at age 47, maintaining scarce contact through phone calls and cheery, disjointed letters. When she died, none of the Loudons had known she'd been diagnosed with cancer. She even told the hospital staff there was no next of kin.

The news of Catherine's death is where Mary Loudon's memoir, "Relative Stranger: Piecing Together a Life Plagued by Madness," begins. Structured as a detective story, "Relative Stranger" chronicles Loudon's attempt to learn what her oldest sister's life had been like in the 11 years before she died. Loudon, a British author who's written nonfiction books about religious life in England, had for years been aware and fearful of the ways mental illness held sway over her sister's behavior.

Catherine displayed many of the "positive" symptoms of schizophrenia -- "positive" in that they create delusions and sounds and images where nothing exists to be heard or seen, as opposed to "negative" symptoms, which are characterized by a lack of normal sensations or social functions. She had hallucinations. She believed the police were following her, and crafted elaborate conspiracy theories. She couldn't sleep in the dark, a problem she solved by staying up all night. For years she was aggressive and could teeter on the edge of violence, once threatening Loudon with a knife when Loudon was a child. She couldn't keep a job or stay on one topic of conversation for longer than a few moments. For Catherine, these symptoms were a constant. There was no life outside them.

After Catherine's death, Loudon is left to fill in the gaps. To do so, she begins the eerie process of retracing Catherine's steps. She visits Catherine's apartment in Bristol. She interviews the super, the doctor, the local grocer, and various members of the clergy who knew her sister; each one serves as a link to the next person down the line who might have a detail to add to the portrait. Loudon finds that Catherine, who had shown some brilliance as an artist when she was young, had continued to paint, though the work had diminished in quality and inventiveness. There was a circuit of shops and churches she liked to visit; some days she was talkative, other days she'd sit or stand in silence for hours.

She had no romantic entanglements. Uncomfortable as a woman, Catherine reinvented herself as Dr. Steve Stevenz -- Stevie for short -- dressing in men's clothing and modifying her walk so it resembled a masculine gait. She didn't seek treatment for her breast cancer for a year after she discovered a lump because she was embarrassed to be afflicted with a disease associated with women.

The picture that emerges is of someone who lived quietly, according to a well-defined routine. We never learn whether she did so willfully, an acknowledgment of her own limitations, or because she simply could not function any other way. Most of the details that Loudon shares come through the form of other people's testimony, and much of that information seems watered down or restrained. Some are impressions at best. The only scene that hints at the helter-skelter of Catherine's mind in her later life takes place in her apartment. "All of Catherine's problems were contained in that flat," their mother warns Loudon. Inside, Loudon finds "the jagged top layer of a derangement so profound that I doubt I will ever see its like again."

Shuffled in among the scraps of food and other trash on the floor are empty packets of Kodak 35mm film, a Rubik's cube, stray shoes, lampshades, pill bottles, broken clocks, knit scarves in the colors of Catherine's favorite football team, her paintings of Tibetan monks, a Madonna figurine. The words "Lord, this cell is cold" are scrawled on the wall; Loudon sees them and sobs. The sole item of furniture is a bed, two mattresses piled one atop the other in the corner of the living room. The proper bedroom is in use as a closet, with clothes piled so high on the floor that Loudon can barely open the door to enter the room. External surroundings can't provide a perfect reflection of inner life, but this is the closest Loudon comes to evoking the illness as Catherine lived it.

If only the whole book were so vivid. Loudon is a wonderful writer, open and thoughtful. She frequently raises the larger question of what sanity is, and her insights are rendered with sparkling precision. But she stiffs us on what we might think of as primary source material, like Catherine's notebooks, which Loudon deems too chaotic and "hellish" to share. Far worse, she leaves out details derived from a paper trail of letters from doctors, social workers, bank and prison officials, sent to the Loudons over the years. Excluded, too, are letters between Catherine and her parents. (The spellbinding excerpt of her father's journal that Loudon does include, from his 1973 trip to India to fetch Catherine after her breakdown, suggests that his letters would have been a fascinating addition.) We know these documents exist because, toward the end of the book, Loudon reads them, paraphrasing their contents in a few sketchy lines: "There were official letters, loving letters, pleading letters, begging letters ... There were letters written from locations which themselves served to illustrate the nomadic tumult of Catherine's early twenties: letters written from comfortable homes and gardens but also from bedsits, hospitals, beach huts, mountain cabins, hippy communes, and prisons." Yet Loudon omits them -- all of them. When you've followed her through a ream of interviews, it's frustrating to come so close to Catherine, only to have the information withheld at the last minute. It's hard to think of a single way in which their inclusion wouldn't have made the story deeper and more complex.

So why does Loudon keep the letters to herself? Is it propriety? Is she protecting Catherine, or the family, or both? Or is it unreasonable, as a reader, to expect to see it all in memoir, and to be disappointed when we don't?

The answer is that at bottom, "Relative Stranger" isn't really about Catherine, and so the letters are, in the end, immaterial. And it's not about schizophrenia either, which, beyond an information-driven early chapter, Loudon describes chiefly in metaphor -- it's a "terrible sentence," a place where one is from, a "poisoned filter." No, it's about Loudon herself. Memoirists aren't obligated to tell any story but their own, and the story in question here is about her journey toward understanding the workings of Catherine's illness. It's about the experience of mourning someone she loved but barely knew, and about the task of having to ask strangers what her sister was like. (A lowlife at a coffee shop counters, "What kind of sister are you?" Oof --)

It's also about her quest to prove to herself, and us, that Catherine's life had value -- to challenge the latent assumption that the lives of the mentally ill are somehow of lesser worth. "How terrible for your parents," one person says upon hearing the news. "But it's better in a way they know what's happened to her, than that they die wondering"-- as if a child's early, lonely death ever could be a relief to her parents.

Catherine's death was actually the opposite of a relief to Loudon -- it was the opening of a book, rather than its conclusion. And in a similar inversion, the driving question of "Relative Stranger" comes at the end, not the beginning. "What is a good life, well-lived, and who says so?" Loudon asks. She doesn't offer an answer. The absence of one suggests that perhaps such categorizations are irrelevant. A life is a life, and Catherine's was no different.